The Wheeling National Heritage Area Corporation continues to breathe new life into Wheeling’s oldest cemetery. This summer, the Mt. Wood restoration project, led by Wheeling Heritage historian Bekah Karelis, is working to restore mausoleums, monuments, obelisks, and the landscape of the cemetery to its former glory. Karelis’ group of loyal volunteers includes students from the Belmont College Building Preservation and Restoration Program, members of Friends of Wheeling and the Wheeling Young Preservationists, as well as general volunteers from the community. They are hard at work during “Mt. Wood Work Days” held the first weekend of every month. Several local businesses provided donations of tools and materials for the summer workdays. Volunteers have already spent almost 200 hours this summer beautifying Mt. Wood. 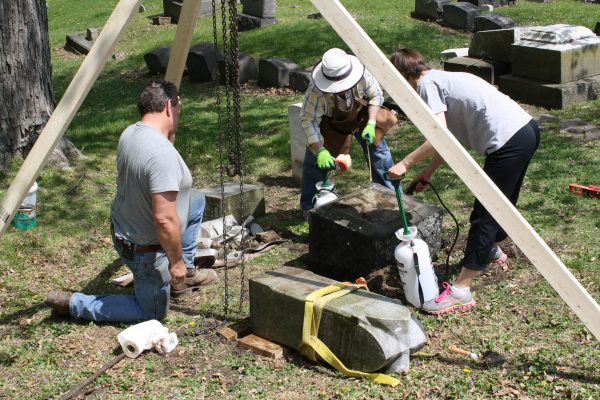 The Mt. Wood Restoration Project’s goals for 2015 include the following: preservation planning for two mausoleums; restoration of the “Rosenburg Arch,” a masonry arch monument that marks the grave of a local stonemason; and the completion of the Mt. Wood individual burial marker survey, which is being conducted by the Wheeling Young Preservationists.  These goals are in addition to having reset 33 gravestones and monuments at the workdays so far this year. 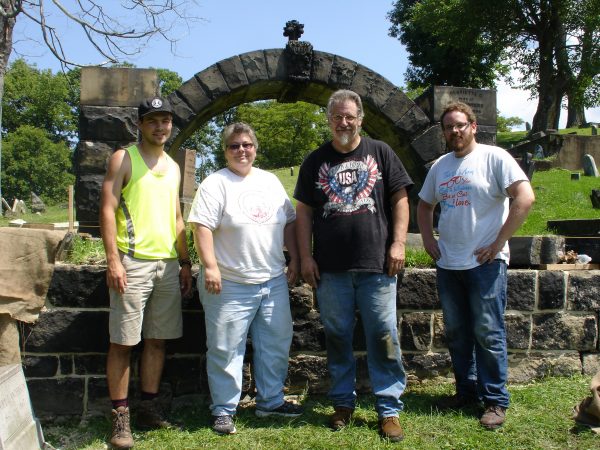 The West Virginia State Historical Preservation Office recently awarded the Mt. Wood Restoration Project a survey and planning grant through the Wheeling Historic Landmarks Commission. This grant will be used to write historic structure reports and construction specifications for the restoration of two prominent Mt. Wood mausoleums, the Forbes mausoleum, and the Bishop/Robb mausoleum, which are in desperate need of repair. Karelis is currently finalizing details with McKinley & Associates, who was awarded the contract earlier in the summer and will conduct the work in the coming months. 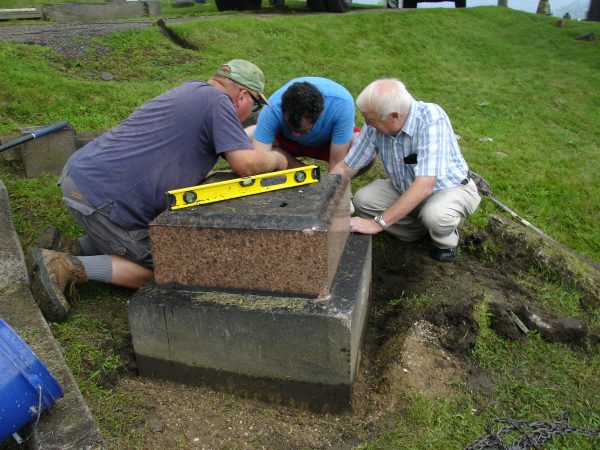 The Belmont College Building Preservation and Restoration program’s masonry class is taking the lead on restoring the Rosenberg arch. A stonemason built this large masonry arch in memory of his wife in 1896 and was laid to rest there also, just a few years after her death.

Wheeling Young Preservationists (WYP) are also partnering with Wheeling Heritage to conduct an individual burial marker survey. Groups of WYP volunteers have filled out forms for each gravestone in Mt. Wood, gathering information on everything from the marker’s measurements to its condition, and transcribing whatever information is legible on the stone. This data will then be compiled to create an online interactive story map of Mt. Wood, which will eventually be available online for anyone interested in Mt. Wood’s history.  The first section of this map is planned to be launched later this year.

These projects have been made possible by the leadership of Wheeling Heritage, and the continued support of the city of Wheeling and several local businesses. The city mows the grass at Mt. Wood and provides sand and gravel for restoration efforts. Earlier this year, Wheeling Lowe’s filled a Mt. Wood restoration project wish list, providing new tools like water sprayers, shovels, and scrub brushes to be used on work days, as well as new flowering bulbs and annuals. Randall Gallagher Memorials of St. Clairsville also donated monument-setting compound. Sarel Venter, of Adventures in Elegance, has graciously donated his machinery and expertise in helping right some of the larger monuments and obelisks. While these donations are a great help, Wheeling Heritage is always looking for more donations and volunteers to help preserve Mt. Wood. 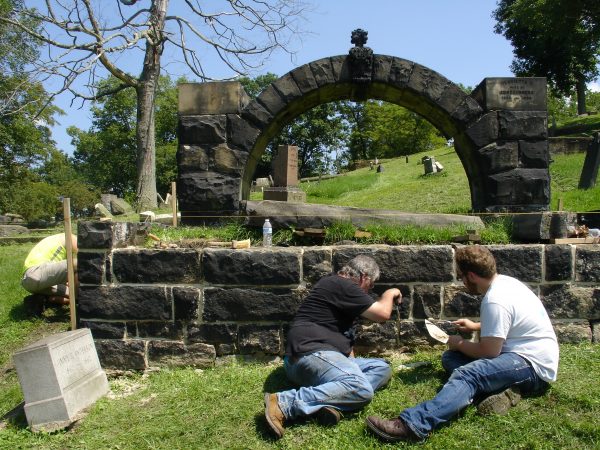 Mt. Wood preservation efforts began in 2013, when a grassroots movement of several local organizations and volunteers began to come together on Mt. Wood’s behalf. Long the victim of vandalism and the effects of gravity, most of the gravestones and monuments were falling over, leaning, or in desperate need of a cleaning.

Since then, Friends of Wheeling, the Public Policy Foundation of West Virginia, Wheeling Young Preservationists, and the Irene Meagel Fund at the Community Foundation for the Ohio Valley have all been involved in various projects at Mt. Wood.

Volunteers from these groups have worked to properly restore monuments by attending workshops conducted by gravestone conservators on how to reset and repair burial markers. Mt. Wood faithfuls convene for workdays the first weekend of every month, meeting Saturdays at 9 a.m. and again on Sundays at 1pm to beautify the cemetery for three or four hours. The next workdays will be held September 12 & 13. (They were moved to the second weekend of this month because of the Labor Day holiday.) She has begun holding evening sessions as well. Karelis said this summer’s workdays have been highly productive.

“We’ve had many new volunteers come out to lend a hand this year, which is very important in keeping this project going. Even more significant is the amount of volunteers that have been working with us for several years. Because of them, we have been able to keep this project going; we would not be able to keep the momentum that we have had without them showing up and being ready to work.” 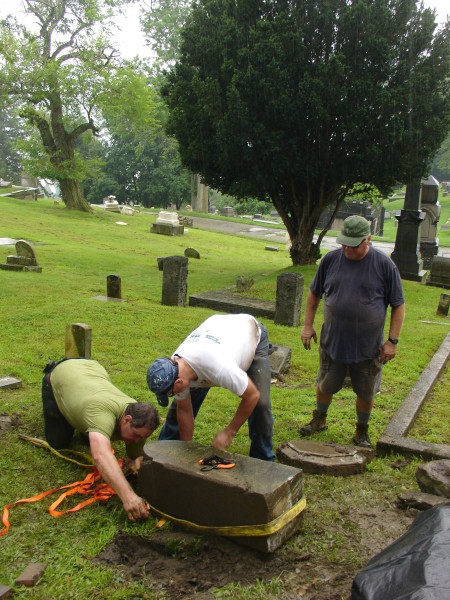 Mt. Wood Cemetery was established in 1848, and a majority of the markers on this property date from 1840s-1930s with the greatest concentration being from the mid-late 1800s. Some people of interest buried at Mt. Wood Cemetery include the following: Simon Hullihen, considered the father of oral surgery by some; Capt. John McLure, a prominent riverboat captain; Edward Norton, early city leader; Noah Linsly, founder of Linsly Military Institute; John Goshorn, owner of the last slave to be returned according to the Fugitive Slave Act in 1850; Eliza Hughes, the first woman doctor to practice medicine in the newly-formed state of West Virginia; and, Col. Joseph Thoburn, who served with the First West Virginia Infantry and was fatally wounded at the Battle of Kernstown in 1864.

Not only was the cemetery a popular place of interment during the 1800s, but it is also a classic example of the “rural romantic movement” in landscape architecture. It is a beautiful spot to view both the Ohio River Valley and the Wheeling Creek Valley.

If you are interested in participating in these restoration efforts or learning more about helping to preserve Mt. Wood’s history, contact Bekah Karelis at 304-232-3087 or visit the “Restore Wheeling’s Mt. Wood Cemetery” Facebook page.

If you would like to make a tax-deductible donation to the Mt. Wood Fund, checks with “Mount Wood” written in the memo line can be sent to the Community Foundation for the Ohio Valley, P.O. Box 670, Wheeling WV 26003.