He was draped in a couple of shirts, a hoodie, two pairs of socks, little-boy long johns, a snowsuit, ski cap, and his favorite boots, and then a tuxedo of sorts was placed on top of all the applied layers.

When Aunt Laura was finished wrapping him, he reminded his mother of “Randy” from “The Christmas Story” during the scene when the mother dressed her youngest for his walk to school on a frigid winter morning.

Hines Rotriga, like “Randy,” couldn’t put his arms down after the boy was bundled for his 18-degree cruise through downtown Wheeling last Friday night. Hines, the 3-year-old son of Kevin and Debbie Rotriga, was selected by the Wheeling Area Chamber of Commerce to serve as the grand marshal of the 29th annual Perkins Restaurant and Bakery Fantasy in Lights Parade last Friday night.

He, his parents, and several employees of both Miklas Meat Market and Quaker Steak & Lube boarded the float with him to celebrate the tiny man’s battle against the Boogie Man of diseases for almost a year.

And Hines waved as much as he could to those waving and shouting his name – not only was the bundle-up restrictive but so is his illness. He recognized as many of his supporters as a 3-year-old can, but truth be told, he had no idea who most of us were. We waved, and Hines just waved back, and he also offered his signature, “Thumbs Up” pose because he’s being raised to be pleasant and polite despite the hell that’s been injected into his veins and the misery witnessed by his parents since that day. 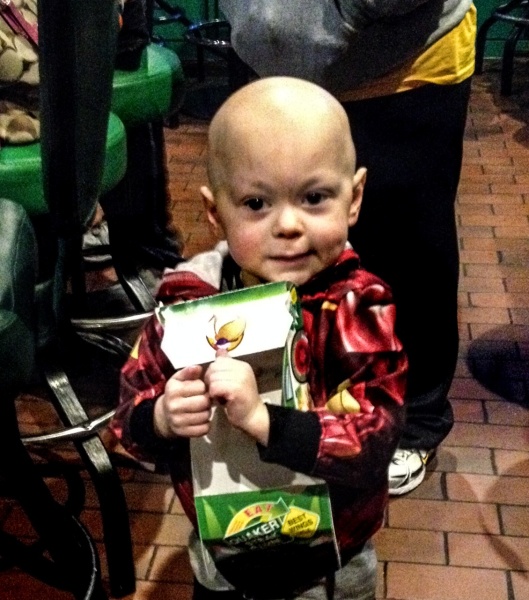 The management of Quaker Steak & Lube at The Highlands has staged several fundraising events in 2014 in an attempt to help the Rotriga family while Hines battles neuroblastoma.

On Dec. 26, 2013, Hines was diagnosed with Stage IV neuroblastoma, a type of cancer that forms from immature nerve cells located in many areas of the human body. Neuroblastoma most frequently attacks children 5 or younger and can prove fatal.

“He wasn’t feeling well, so we took him to the doctor,” Debbie explained. “We thought he had a cold or the flu, but that’s not what we heard from the doctors once all of the test results came back.

“We didn’t know what to think because we had no idea what they were talking about at first,” she said. “All Kevin and I heard was the word, ‘cancer,’ and we both freaked out.”

It’s been a long, scary, exhausting, roller-coaster kind of year for mother, father, and son. Very soon after the diagnosis, Hines began receiving treatments. New York, Morgantown. Morgantown. New York. Chemotherapy, radiation. Radiation, chemotherapy. His appetite diminished and so did his happy-kid demeanor. And then his hair fell out.

But at one point this past summer, his test results came back so positive many were allowed to believe in a miracle come true. In early August, his hair had grown a little, his mother seemed more rested than I’d seen her in a long while, and Kevin was finally able to return to work at United Refrigeration Inc. 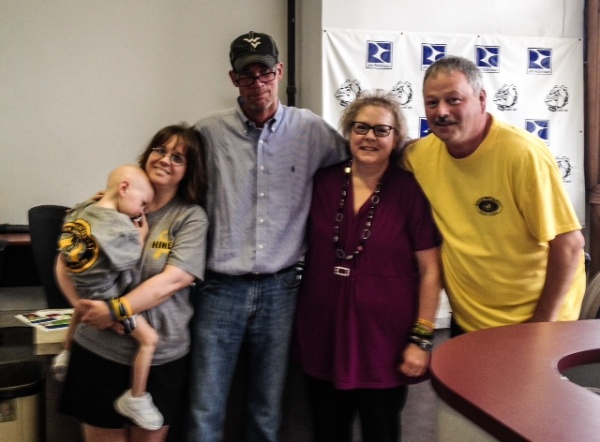 The Rotriga family has visited local media outlets in Wheeling so they could issue, “Thank Yous” to the Upper Ohio Valley community on a number of occasions. This photo was taken after Hines and his mother, Debbie (on left) appeared on the Watchdog Network (AM 1600 WKKX and AM 1370 WVLY) with yours truly and Laura and Dave Rotriga.

Two months later, though, doctors found tumors again. The Boogie Man hadn’t let go of him as everyone hoped, so the cycle began yet again. In fact, Hines was in Morgantown’s Ruby Hospital for two weeks prior to returning to Wheeling the day before the parade.

“When those test results came back and the doctors told us what the results meant exactly, we both cried the 19 blocks back to our hotel,” Kevin recalled. “We went there for the usual testing and really didn’t expect the bad news because of how well he was getting along.

“If Hines had his hair right now, you wouldn’t even know that he’s sick right now. I mean, look at him, right now,” his father insisted while his son played with his favorite toy cars with his buddy, Christine Thomas, the marketing manager of Quaker Steak & Lube. “As parents, we don’t know what to think right now. We really don’t. It’s day by day right now because it has to be.” 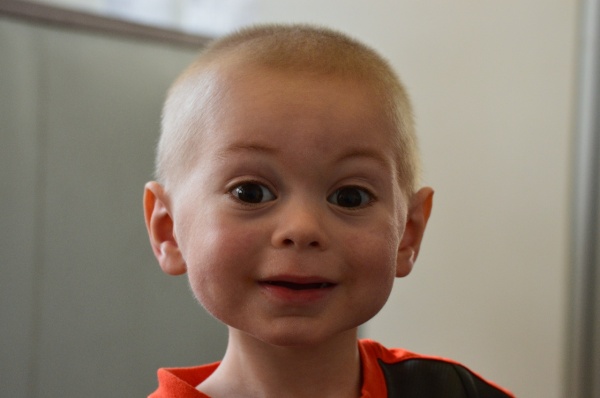 And at this point, they are thankful for day to day, and that’s because they have to be. They’ve both looked it all up on Google. They’ve read link after link even though on Dec. 25, 2013, neither of them had a clue how to spell, “neuroblastoma.”

“Since that day he was diagnosed, Hines and our family have received so much support from our families and from our community,” Debbie said. “We started the ‘Hope for Hines’ Facebook page, and it went nuts almost immediately, and the amount of the events people and organizations have put on since has been unbelievable. Our appreciation really can’t be put it into words, and we really have no idea how to thank everyone. We’re just so thankful for everything.

“And we thank God every day for Kevin’s brother, Dave, his wife, Laura, and all of their employees. They’ve all been amazing to us. They’ve been there with us the whole way, and what they have done at Miklas Meat Market has been more than anyone could expect – even from family.”

Dave and Laura Rotriga have owned Miklas Meat Market since 2008, and the butcher’s business on the corner of Edgington Lane and Carmel Road in the Edgwood section of Wheeling has served as the “Hope for Hines Headquarters” for most of the past year. They and their staff members have conducted soup sales and bake sales and hoagie sales and whatever other sale they could think of, and customers can purchase sweatshirts, ball caps, magnetic ribbons, hoodies, T-shirts, teddy bears, cookbooks, and a few raffle tickets, too. 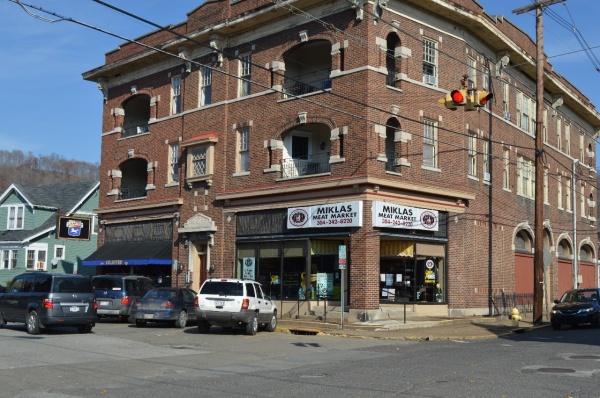 Miklas Meat Market, owned and operated by Hines’ aunt and uncle Dave and Laura Rotriga, has served as the “Hopes for Hines Headquarters” since doctors diagnosed the child the day after Christmas 2013.

The youngster also has attracted a fan in former Pittsburgh Steelers wide receiver Hines Ward. The future Hall of Famer has visited Hines on two occasions, and yes, the boy was named after the Pro Bowl receiver.

“I’m betting he understands more than we realize, but I doubt he knows he’s real sick because so many people have been so nice to him,” Kevin said. “But in a few years we plan to sit him down and go through all of the scrapbooks we have from everything. We want him to realize how many people have stepped forward to help him so he can be as thankful as we are.

“I look at Hines, and even though it’s been less than a year since this all started, it just seems as if he’s matured at twice the rate as other children that age do,” the proud father explained.

Debbie admitted she’s noticed this too, and not just his physical growth, but also his mental maturation.

“When we get ready to go somewhere, he’ll ask me now if we are going to the hospital,” she said. “He doesn’t run and hide either when I say, ‘Yes, we’re going to see the doctors.’ I think he just wants to know what to expect because of what he’s experienced since last Christmas.

“It usually takes a while for him to warm up to most people,” Debbie said. “But not with the people at the hospitals now. He knows them, and he helps them because he seems to know what they need to do.”

We’ll only know how many memories Hines retains of the parade, of the special events and fundraisers, and of his uncle’s and aunt’s tireless support once he explains it to us in a few years. Right now, though, he’s a rambunctious toddler who sees no needles or IV bags or germ masks. 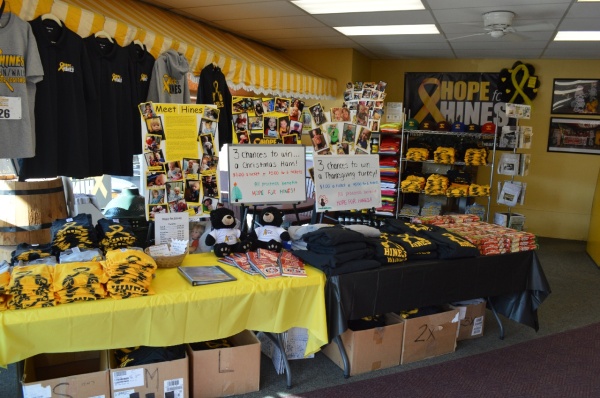 Patrons of Miklas Meat Market encounter this table of merchandise once entering the locally-owned business.

And, at this moment, Hines wants to play, so we did just that for about 10 minutes before it was time for him to head home to his drum kit and his own bed. We didn’t speak any syllables to each other while we rolled his favorite mini-cars back and forth on Quaker Steak’s “Brickyard” bar. He would giggle when I had to chase one of them, and after I returned it to him, he would roll it farther away than the last one.

And he would giggle again.

Hines found it funny, and I found it joyful.

When our playtime arrived to its end, I hugged Hines, and I asked him, “You OK, Superman?”

And that’s when he spoke the only two real words he said to me this past Monday afternoon.