It started with a boat bought on ebay.

One brother and mother purchased the vintage race boat named “Little Fission”  and gifted it to another brother and his son.

And before they knew it, the Joseph family owned five race boats and was attending many events along the country’s East Coast.

“A couple of years later, my husband Dan decided he wanted one, too, and he found, ‘The Judge,’” explained Debbie Joseph, the founder and director of the Wheeling Vintage Raceboat Regatta. “And after going to several regattas in other cities, I would keep looking down at Heritage Port from the Fort Henry Bridge, and I kept saying that I thought something like that could work here. 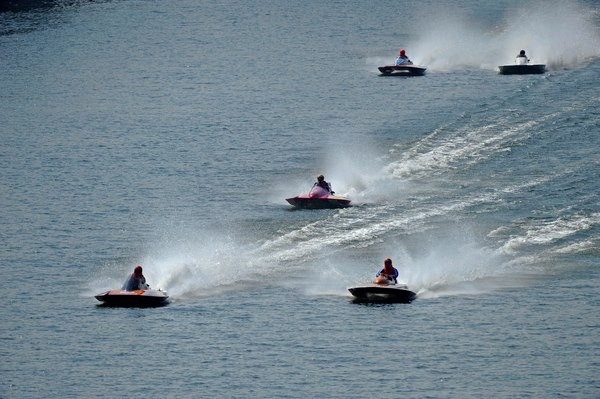 Weather permitting, the two days are chalk full with exhibition heats on the Ohio River.

“After hearing me say that for probably the 10th time, Dan finally looked at me one time and said, ‘If you think you can do it, then do it.’ So I did,” Joseph recalled. “The first year it was a one-day event, and I heard that year from a lot of people that we should expand it to two days, so that’s what we did for year No. 2.

“The people with the city of Wheeling have been great to work with from the very first meeting we had with them. I don’t think they knew exactly what we were talking about, but they’ve been very happy ever since,” she continued. “It’s really a great environment with something for people of all ages.”

Joseph hopes at least 40 boats will be featured during what will be the 10th annual race boat regatta in Wheeling on September 5-6, and each of the water crafts was constructed before 1986. Wheeling’s regatta is, in fact, a member of the American Power Boat Association’s vintage division.

“The oldest one that we have had at the regatta was constructed in 1947,” Joseph said. “Most of them are made of wood, but we also have had boats made of fiberglass and one that was made out of aluminum. 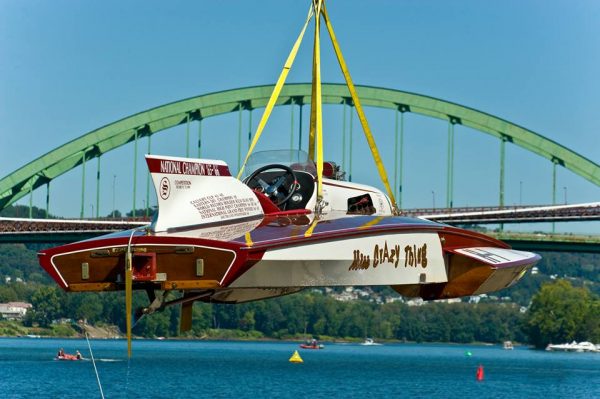 Savage Construction has donated the crane service throughout the history of the annual regatta.

“Fiberglass was just coming into play as a material in the 1980s, and so was aluminum, so that’s why they are allowed to be there,” she said. “Although they are not made of wood, they still look as if they were. They’re pretty amazing.”

The complete schedule of events can be found on the event’s website: http://wheelingvintageregatta.com/. The regatta also has a Facebook Timeline: https://www.facebook.com/pages/Wheeling-Vintage-Raceboat-Regatta/105070736087?fref=ts.

Joseph possesses two primary objectives as she is organizing the annual event throughout the year, and both of them concern offering something for all residents of the Upper Ohio Valley community.

“Our goal with the regatta every year is to offer the people of this area world-class entertainment and to get up-close with something they probably think is pretty neat,” Joseph said. “And we do everything we do to make it a free event so anyone can come and enjoy everything that is going on during these two days.

“Another goal of ours is to operate the regatta in a fiscally sound way so we have the funds to donate to Easter Seals each year after the event,” she continued. “In our first nine years we have been able to donate a little more than $48,000 so that means this year we will go over $50,000.” 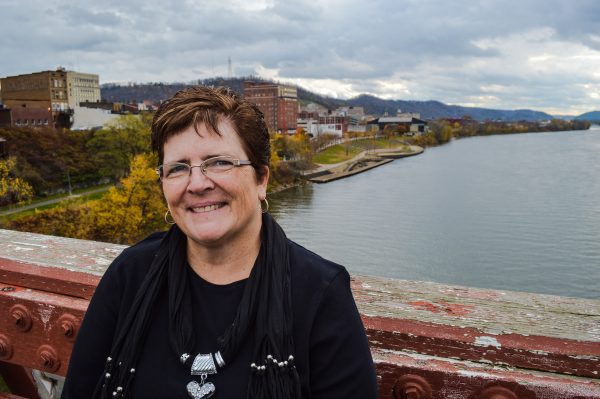 Debbie Joseph and her family founded the Wheeling Vintage Raceboat Regatta 10 years ago and the proceeds are donated to Easter Seals.

Easter Seals has been a part of Debbie Joseph’s life for the past 33 years, but not because she or a family member received care from the rehabilitation facility prior to 1982. She approached officials of the organization because she wished to pay something forward.

“I gave birth to my daughter, Kristen, in 1982, and she was a perfect baby. She had 10 fingers and 10 toes, and I felt like the luckiest mother in the world because I knew there were moms out there who weren’t blessed like I was,” Joseph explained. “I was humbled by it; I really was, and that’s why I called Rosemary Front at Easter Seals. I told her I wanted to do something to help as a volunteer, but I didn’t want to stuff envelopes. I wanted to work with the children.

“After two years of volunteering at the rehabilitation center, I became pregnant with my triplets, and the doctor told me that I couldn’t be crawling around on the floor with the children anymore,” she recalled. “But then Rosemary offered a position on the Easter Seals board, and I accepted, and I’ve been involved ever since.”

Since the inaugural Wheeling Vintage Raceboat Regatta 10 years ago, the amount the non-profit has donated to Easter Seals has increased each year except for last year’s event. Joseph lost Day 2, and the finger can be pointed directly at Mother Nature. 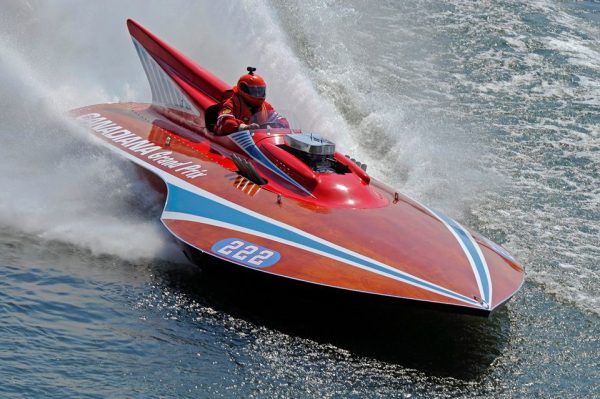 The action is fast and plentiful during the annual Wheeling Vintage Raceboat Regatta.

“It was very unfortunate, but we made the decision we had to make because of the weather and how much debris was in the Ohio River Sunday morning,” she said. “First and foremost, we make this event as safe as it can possibly be for everyone, and river conditions are a big deal when you are driving a vintage race boat.

“We were still able to donate $5,000 to Easter Seals despite the bad weather and the lost day,” Joseph explained. “So our hope is to make up for it this year, so we’re praying for a great weather weekend.”

Along with a plethora of exhibition heats during the two days, attendees will also enjoy a car show along 12th Street, a “Family Fun Tent” will be on the Heritage Port grounds, and members of the Ohio Valley Hilltoppers will demonstrate their remote control airplanes and drones during breaks in the on-river action.

The Sarah Hayes Band will perform each day at Noon, and Saturday evening will feature The Muddle at 7:30 p.m., and the 40-Plus Oldies Band beginning at 9:30 p.m.

Children 5 years and older also can participate in the Seaquest program that teaches kids the art of building a boat.

“Seaquest actually gets started during the week leading up to the regatta, and it’s a boating clinic for children of all ability levels,” Joseph explained. “These children work side-by-side with each other, and they help each other along the way. A lot of new friends are made each year.

“And we offer Seaquest at no cost to the children’s parents, and we’re able to do that thanks to Lowe’s,” she said. “They have donated all the supplies that the children need to build those boats, and we could not offer it without that wonderful donation.”

While Joseph has handled the vast majority of the organization each year, she also relies on as many volunteers she is able to gather. Her entire family, including Dan and Brian of course, is on site most of the weekend, but volunteers are the folks who allow the annual race boat regatta to take place each Labor Day weekend in Wheeling.

But she insisted there’s room for more.

“Everyone on our committee is a volunteer, and we now have 35 people on our committee,” Joseph said. “And we can always use more because we staff a lot of different areas because of the safety that’s involved. One of those areas is the pit area because there are times when the pits are very restricted.

“If someone would like to get involved by volunteering, all they have to do is reach out and contact me,” she said. “It’s a big event, so we need as many volunteers as we can get.” 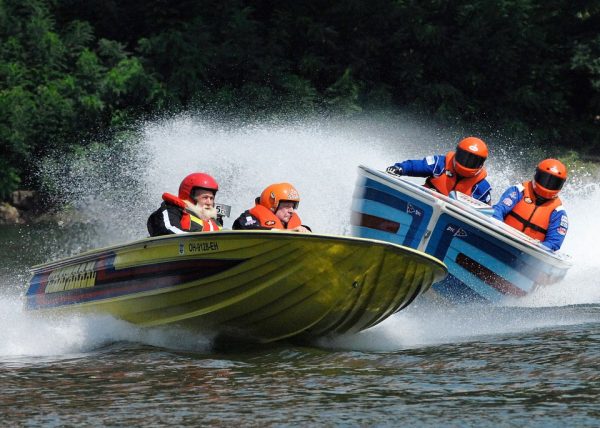 The vintage raceboats travel at high speeds as long as the river if fairly free of debris.