It depends on a person’s age, really, as far as which “George Kellas” he or she remembers or knows today. And it is the family of young George Kellas that owns a legacy of working to make the Wheeling community a better place to live and work.

The first “George Kellas,” a second-generation Greek immigrant, was a family physician who was instrumental not only in caring for his fellow citizens but also with improving the quality of life in the Wheeling area before his passing at 74 in May 1992. The second “George Kellas” was a publisher, a familiar voice on the local airwaves, and as a sports broadcaster on both local television stations, he brought that ESPN Sportscenter-style to the Upper Ohio Valley well before the cable network launched in September 1979.

He passed away after a short battle with cancer in February 2009.

“From what I have been told, he [the first George Kellas] was a well-known doctor here in the Wheeling area, and after he was drafted into the service, but within 90 days he was discharged because he became sick with a disease that left him unable to move very well,” explained 23-year-old George Kellas III. “Even though he was a young man, only 19 at the time, he then had to use a cane for the rest of his life so he could get around without the risk of falling.

“My grandfather wanted to be a surgeon, but that illness left him unable to do that, so he became a family doctor,” he said. “My dad used to tell us endless stories about my grandfather because he was his No. 1 fan. He tried to explain to us how my grandfather would have interacted with us if he were still alive. I know my father really had a lot of appreciation for my grandfather’s dedication to this community.” 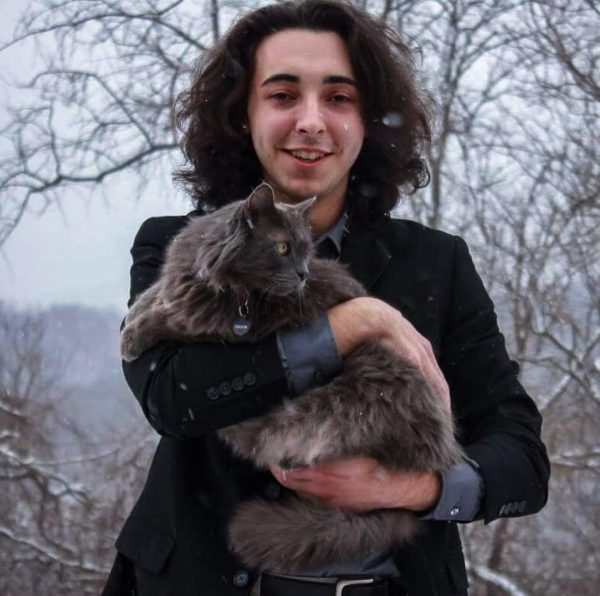 Shadcat Marketing is a company named after his pet, and one that has had an impact on the Wheeling area. George Kellas III is also a “Lend a Hand” sponsor of Wheeling Heritage’s “Show of Hands.”

Kellas’ father was graduated from Triadelphia High School in 1973 and from West Liberty State College in 1980. He was the founder of the Ohio Valley Greyhounds, an indoor football team that won national titles in 2002 and 2003, and he spent 12 years with WTRF-TV7, and eight years with WTOV9 before serving as co-founder of the Watchdog Radio Network, AM 1600 WKKX and AM 1370 WVLY.

“My dad was definitely a popular voice in this valley; that’s for sure, and I hear stories about him all of the time,” Kellas explained. “During most of his career, he was a public face on the local television stations, and he did a lot of radio, too. He was one of the founders of AM 1600 WKKX because he believed the industry was going away from local, and he was right about that.

“The public part is one thing that can be said about all three of us,” he continued. “My grandfather was very active in the community, and as a doctor, he was able to help a lot of people who otherwise would not have had a person to turn to, and my dad had business institutions behind him during his career, but he made the most of those opportunities.”

It was esophageal cancer from which Kellas II passed just six days after his 53rd birthday, and the public reaction astonished his family and friends. At the time, he and his wife, Sherri, were raising three children, including Max and Lydia. 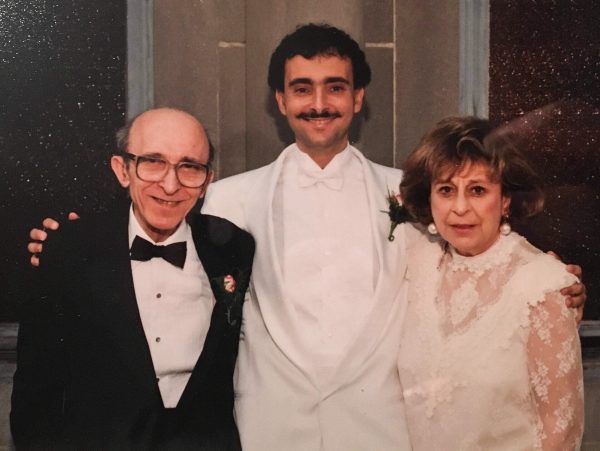 George Kellas II — with his parents before his father passed in 1992 — when he married his wife, Sherri.

“That was a very tough time for me and my family because he was a young man,” Kellas recalled. “Beyond the traditional mourning process and the other issues that families have to handle when losing a parent, there was also a lot of demand from people to speak to him one last time. Once the people in this community found out, the phone never stopped ringing. They just wanted to tell him how much he meant to them.

“I remember the response after he had passed. It was insane. I don’t think any one of us in the family expected that because, I guess, we didn’t realize what he meant to this community,” he explained. “There was a four-hour wait at the funeral home with a line out of the door, and it was standing room only at his funeral. That was the first time in my life I had ever seen my church that packed. It left me with a message, and it let me know what I was up against as far as having his name.”

Kellas III also has his father’s entrepreneurial mind and spirit, beginning in high school and continuing today. He started Shadcat Marketing, a two-person operation that shoots, edits and produces commercial videos. He is also involved with Wheeling Heritage’s “Show of Hands,” a crowdfunding event staged by the non-profit four times per year. Kellas III, a former “Show of Hands” winner, is a “Lend a Hand” sponsor, contributing a $1,000 marketing package to the winning business or organization.

“It can seem like an uphill marketing battle because some people do not see a lot of opportunity here right now, but it is growing, and that keeps me motivated. That fact allows me to believe I’ll be able to stay here long-term,” Kellas said. “I see the Internet as a bunch of untapped potential, and my efforts are often focused on making other people realize that potential. 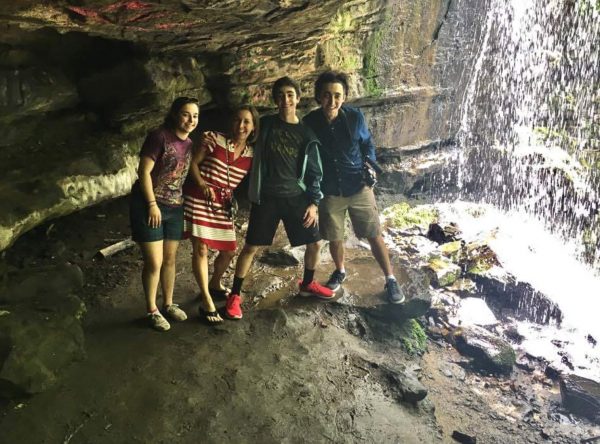 Lydia, Sherri, Max and George III have stuck together since the passing of the family’s patriarch in February 2009.

“By donating what I donate to ‘Show of Hands,’ it allows those new businesses to concentrate on succeeding without having to worry about the expense of marketing,” he continued. “Because I’m just starting out, I don’t have a pile of money to contribute, but I feel this is the next best thing.”

A self-proclaimed “food fan,” Kellas traveled the country seeking eatery owners interested in being a feature of his culinary blog, “Food World Culture,” and he spent significant time in Seattle painting homes and businesses before making the decision to return to his hometown and work on fulfilling his family legacy.

After all, he was senior class president just like this father was, and just as his brother, Max, is now.

“In a lot of ways, I have kind of carried on that tradition, but in my own way. I’m not much into sports, and I’m not going to be a broadcaster, but I have been hooked on audio/visual platforms for many years. That’s how I will carry on that legacy.

“After seeing my dad on TV during my childhood, I guess it prompted me to start making videos and placing them on Youtube,” he said. “I started that when I was 11 years old, and I would have all of the kids in my neighborhood in those videos. Part of what my mission is here is to represent my generation just like my father represented his.” 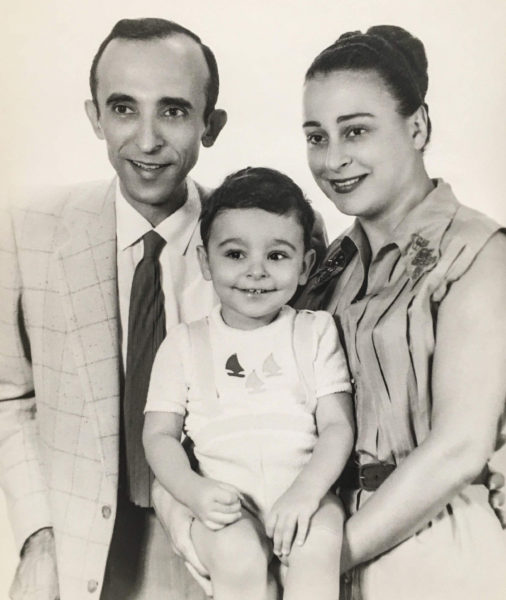 A popular family physician. George Kellas and his wife raised a future sports broadcaster who would have a big impact on the Upper Ohio Valley.

He hears about his father frequently, and he’s been told numerous tales about his grandfather, too, and just as they were, Kellas III is an active member at his church, St. John the Divine Greek Orthodox Church in Center Wheeling.

But the differences among all three are obvious in his mind.

“It’s not really a pressure I feel because of their histories here in Wheeling. It used to feel like pressure around the time when my dad passed, but I have realized that, in a lot of ways, it’s a pressure to take a stand and to step up because that’s what he did a lot, and what my grandfather did, too,” Kellas said. “But he was doing a one-of-a-kind sort of thing, so it wasn’t something I could really do. I knew I couldn’t fill his shoes.

“But, as the years have passed, I’ve become able to feel pride in what I was doing while representing my family name. I am well aware that I am the third George Kellas to live in this city, and I am hopeful to fill a role for a lot of years in the future,” he added. “My father did not do what my grandfather did, although, initially he did go to school to get into medicine. He realized it wasn’t for him though, so he switched it up and did his own thing. That’s what I am doing, too.”