(Publisher’s Note: This is an advertorial paid for by the Mike Kelly for Ohio County Clerk Campaign.)

Since the day he passed the West Virginia bar exam Mike Kelly has gained experience while working within the walls of the Ohio County Clerk’s Office, and now 35 years later he strongly believes he can lead the department into the 21st century as the elected clerk of Ohio County.

Kelly started his private law practice in 1980 along Edgington Lane and adjacent to his father’s home furnishings business. Although he has decided since to work with other law firms, his areas of concentration have always involved real estate, estate planning, and probate. Today leases office space from the Gompers, McCarthy & McClure law firm on 14th Street in downtown Wheeling.

“I go into the clerk’s office in Ohio County and in many other counties, and I’ve become very familiar with how they all work. Until 15 years ago those offices were all very similar as far as how they handled real estate matters. Everything was indexed the same way, and most of everything was all very similar,” Kelly explained. “But then things started changing when we had the lower refinance rates because that’s when everyone started refinancing their loans. 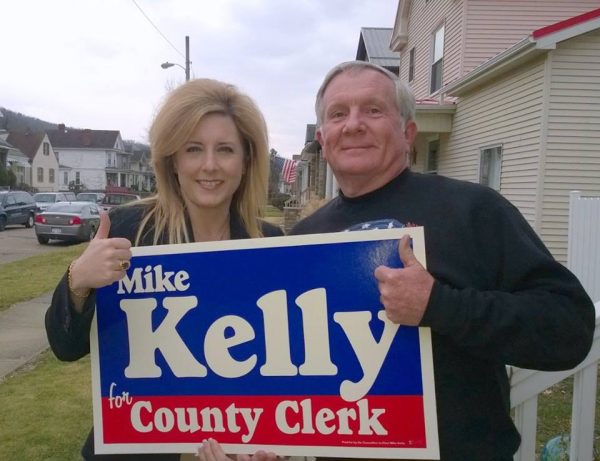 Michele and Randy Rejonis plan to cast their votes in favor of Mike Kelly.

“And then when the oil and gas business came into this area and into the state, that was a whole new ball game and a much different atmosphere,” he continued. “For example, when I perform a title examination for a house, the examination travels 40 to 60 years back in time, but when I am examining for mineral rights, I have to take that search back to at least 1850.”

Along with improving the lines of communication with the Ohio County Assessor’s Office, Kelly said his intentions, if elected, are to increase the amount of information offered citizens online, to better guard former and current residents’ privacy, and to discover ways to improve customer service.

Kelly also is concerned with the preservation of county records that today are susceptible to harm in the hands of gas and oil industry employees who seem unconcerned with the fragility of the volumes of information currently stored inside the clerk’s office. 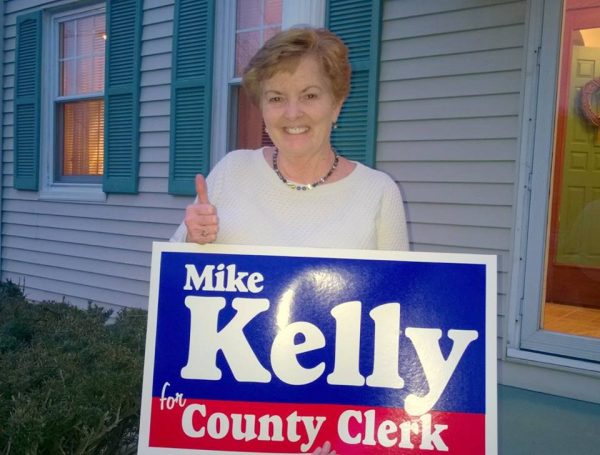 Debbie Page is well aware of Kelly’s qualifications for the position of Ohio County Clerk.

“Those books had not been touched for many, many years, but in the last 10 years they have been manhandled to death by people who have only one goal – get in there and get out – and that means they are not careful with those books,” Kelly said. “I believe, because the use of that information is very necessary now, it is very important for us to do what we can to preserve those books and that information.

“We need to duplicate that information by scanning them before they are damaged any further. Those pages have not been protected, and if they fall apart, we lose our history, and the people who are depending on that money for their future or their children’s future are in trouble,” he explained. “At this point, the information could be preserved, and I believe that’s something we need to do as quickly as possible.”

Anyone who has ever visited the Ohio County Clerk’s Office is well aware of how crowded it is with deed books, filing cabinets, computer terminals, and office space. Kelly believes through the use of current technology he would be able to improve access to recorded documents while preserving original copies for many, many years. 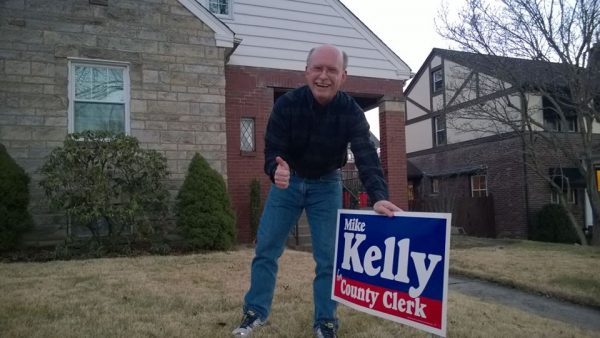 Ohio County resident David Yaeger is an eager voter and supporter of the Kelly campaign.

“Our clerk’s office literally has deed books on the floor of the office now because of the oil and gas business, and my idea is for Ohio County to do what Raleigh County did,” Kelly said. “That county connected their records to the online information the office offers so that means Raleigh County has not had to publish those deed books. Here in Ohio County we have continued to publish those books, and the number of those books is in excess of 1,200.

“I am not sure why the clerk from back then did not make that decision, but I think now is the time to change, especially since we are experiencing a lull in the activity because of the market prices,” he continued. “Initially, I would make a budget proposal for the funding to start the process, but then at the point where we no longer have to publish those deed books, I would be saving $100 per book. If you look at what we have spent since 1991 on those books, you would realize that those savings would have paid for the expense of preserving the information.”

When Kelly researched the cost of the technological equipment employed in Raleigh County, he discovered the expenditure would amount to approximately $60,000. 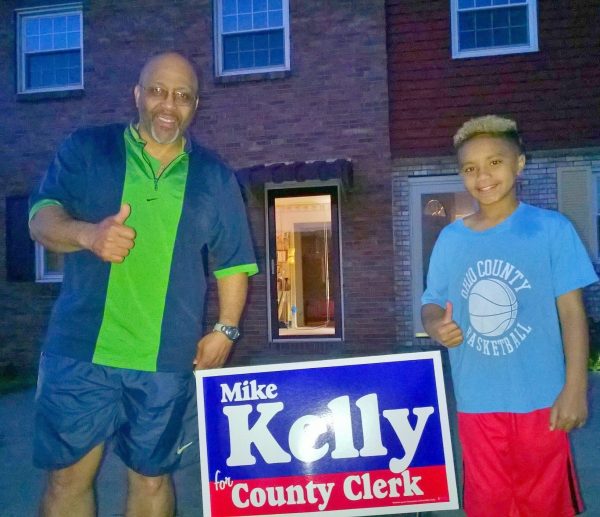 “That, to me, is pretty reasonable, and it would save us on the expense of the deed books, and it would also save us from having to find a place for those books because, as of right now, we do not have any space left in the Ohio County Clerk’s Office,” Kelly reported. “But the space issue can be solved if we work toward the scanning and preservation of those records and also the information inside the deed of trust books.

“The deed of trust books do not need to kept on location as long as many of the records in the Clerk’s Office so those need a place where they can be stored in order to preserve the history. That would also give the opportunity to rearrange the office so that all of the deed books are together, all of the will books are together, so on,” he said. “Also, the office has these tin file cabinets that are old; they are not waterproof; they are not smoke proof or fire proof. They are just metal cabinets, and those records need to be better protected than what they are now.

“Plus, those (UCC-1) financial records have also been collected by the Secretary of State’s Office so they have been renewed that way, so I would like to take those documents off-site so that we could really open up the office to have work stations within the space instead of telling the gas and oil employees that they have to work in the hallway.” 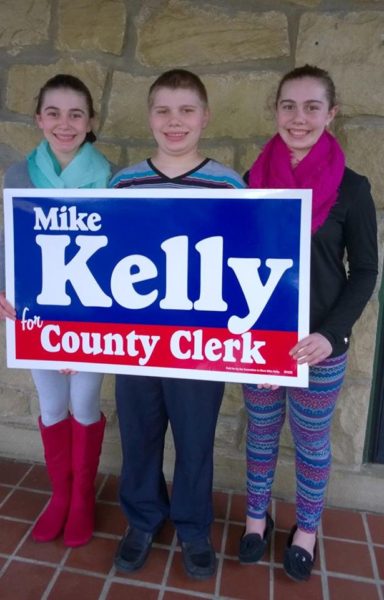 The Ohio County Clerk’s Office operates much differently from the other 54 clerk offices in the Mountain State, and that is because of a constitutional convention that took place in 1872 in an effort to welcome back citizens who sided with the Confederacy during the Civil War. The results, though, also included two primary differences that still exist today involving elections and the probate process because of the approval of Ohio County voters nearly 150 years ago.

In the other 54 counties, Kelly explained, elections and matters of probate are managed and decided by county commissioners and, in the cases of probate, certificates of appointment are distributed before final judgements are made.

“But in Ohio County, it’s not that way at all,” he said. “The Clerk is the official judge in probate cases so the Clerk looks at the records, examines the pleadings, makes sure everything conforms to law, and then makes the decision. Only then is the person truly appointed, and that, to me, is very important.

“The way it works in Ohio County also allows the estate to close properly, and that process includes a 60-day period when creditors can file claims,” he said. “In the other counties, the meeting of the commissioners to make the final decision on the probate could take a couple of months, but here it can be approved 10 days after everything has been filed. That allows the process to move much faster, and I think all of the other counties in West Virginia should do it the way Ohio County does. 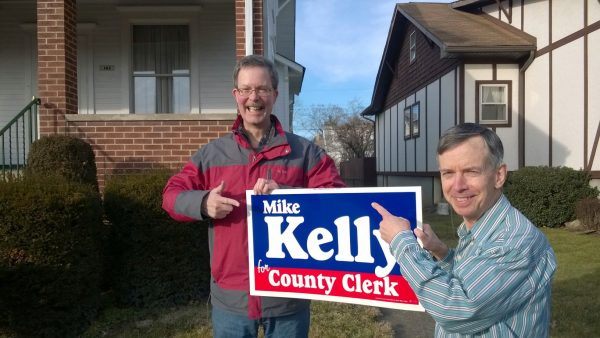 “And I believe the fact that the commissioners handle the voting and the election is better because we have staggered elections for the commissions. That means we always have two commissioners on the commission that are experienced when it comes to voting,” he added. “There’s nothing wrong with the way those two things are handled here now, so why make an attempt to fix something that is not broken? It’s working,”

He is well aware that the Ohio County Republican Executive Committee could appoint a GOP member after primary voting is complete on May 10 to run for the clerk’s position in the general election, but his motivation to launch his campaign will remain the same no matter what.

“I like to garden, and one of the reasons I like to do gardening is because when I start, I can see what everything looks like, and then when I’m finished, I can see my accomplishments,” Kelly said. “That is something that is lacking in practicing law, but in this situation it’s much different. I know what the clerk’s office needs to get caught up with technology, indexing, and helping people in general, and I believe I would get a lot of satisfaction from implementing those things at the end of every day.”