Kept Promise Part of the Deal for Health Plan

By now most residents of the Upper Ohio Valley have heard the news – the first privately funded construction in the downtown district of Wheeling in 30 years was officially announced Wednesday morning by officials of The Health Plan, the city of Wheeling, and the state of West Virginia.

“We could have moved anywhere we wanted,” explained Health Plan CEO and president Jim Pennington. “But we wanted to be a part of what is taking place in downtown Wheeling right now, and one of my goals when I was hired to take on The Health Plan was to return to West Virginia. 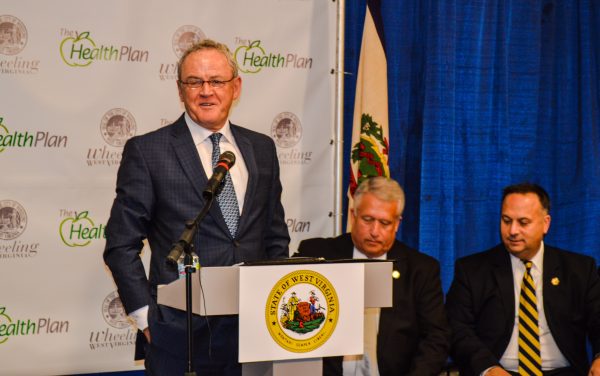 Jim Pennington, president & CEO of The Health Plan, said he is pleased to bring the business back to West Virginia.

“The Health Plan was established in 1979 as a West Virginia corporation and has remained so for the past 36 years. I am extremely proud to say we are coming home to West Virginia as one of the most financially stable not-for-profit managed care organizations in the country,” he said. “We couldn’t be more pleased to relocate our corporate headquarters back to Wheeling along with our over 300 employees.”

What those same residents may not be aware of is the art of the deal.

Pennington explained that working with city and state officials, along with employees of the Regional Economic Development (RED) Partnership, will allow The Health Plan to break ground in the spring of 2016 for a four-story, 53,000-square-foot building within the downtown’s 1100 block. Construction is expected to be completed in the second quarter of 2017, and the company’s investment was estimated between $16-20 million.

“Seven years ago the decision was made to buy the properties, and then three years ago Council voted to bring those buildings down after many potential developers walked away from any chances for the re-development of those structures,” explained Wheeling Mayor Andy McKenzie. “And now here we are today. But great things just don’t happen. Sometimes, as a mayor and as a council member, you have to make decisions that you know will not be popular with a lot of people, and the decision was made by Wheeling Council to purchase the buildings within this area. 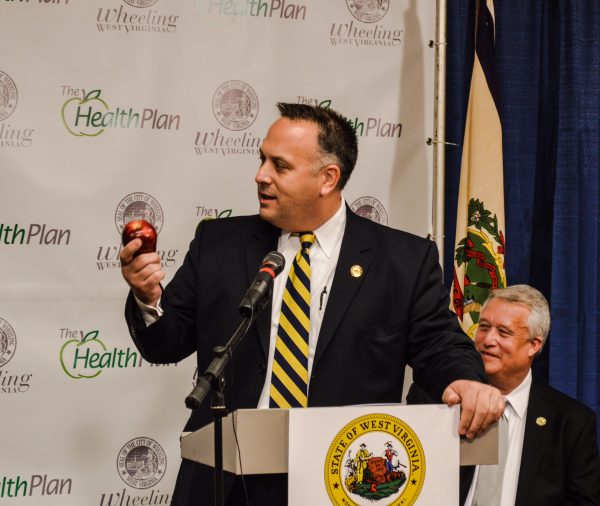 Wheeling Mayor Andy McKenzie presents an apple to Pennington during the press conference.

“If you want to finally see a change, you have to be bold, and you have to do what is right for the future of your city,” he said. “And much of the credit for this must be directed to former mayor Nick Sparachane because he was the first person who decided to address the 100 block. I’m just thankful that we’ve had the foresight to continue with that vision so this announcement could be made today.”

Gov. Earl Ray Tomblin, who attended the annual Project Best breakfast at Wilson Lodge before the Health Plan press conference, believes this relocation will lead to even more development in the downtown area.

“This project has been a true team effort, and I know this new headquarters will have a tremendous impact on the local economy and Wheeling Central Business District,” the governor continued. “This is truly another step in the right direction for the city of Wheeling and for the entire state of West Virginia.” 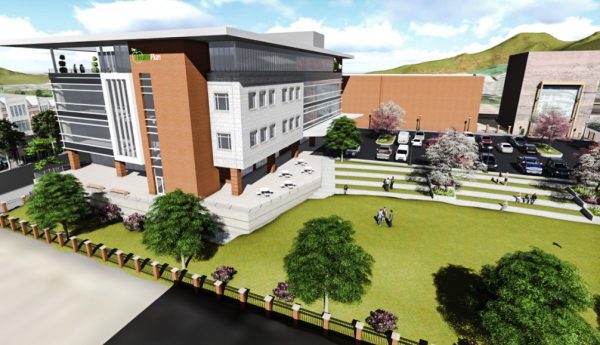 A four-story building, parking, and a courtyard area are included in the design of the new building.

Clear the Land, and They Will Come

Mayor McKenzie made a statement several years ago that the city of Wheeling stuck to during the process of recruiting and negotiating with Health Plan officials.

“I said when the buildings were cleared from the 1100 block that the first development that could take place would be offered the property for free,” he said. “And that’s exactly what we did. The Health Plan did get the land for free.”

The investment made by city taxpayers on the acquisitions and demolitions to date, McKenzie estimated, stands at $700,000, and two more razings will take place before June 1, 2016. The city purchased the two buildings that currently house Vocelli’s Pizza and the Panda Chinese Restaurant. Once those businesses relocate in the downtown area both structures will be removed to make more room for the Health Plan project.

“While I know some are going to argue that the city should not have done that, but I would like those same people to realize some things,” the mayor continued. “When the Health Plan building is ready for opening, immediately there will be 325 new people working in downtown Wheeling with the chance for another 100 more employees in the future, and that means more tax dollars flowing into the city of Wheeling. 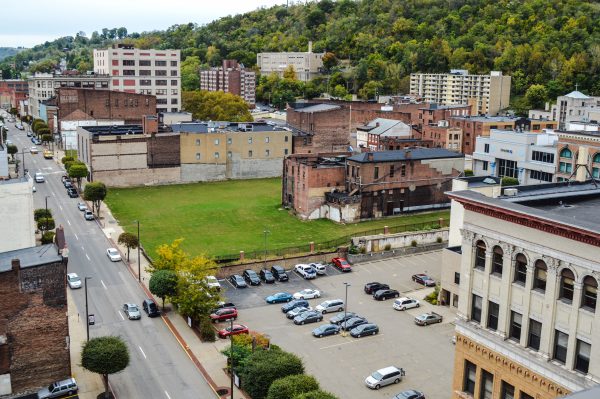 The last two standing buildings in the 1100 block of downtown Wheeling will be soon razed to make way for The Health Plan’s new headquarters.

“Plus there will be additional revenue from the parking meters and from the B&O Tax, and property taxes will increase, as well, because the values of property in the downtown district will increase more than what we have seen over the past several years ,” he continued. “And this new building will be within our (Tax Incremental Financing) district so The Health Plan will allow those bonds to be paid off much more quickly than without them coming to the downtown. It’s a win-win for Wheeling.”

McKenzie refused to be specific, but he did admit that Wheeling has missed out on more than a few opportunities for new development in downtown Wheeling, and the reasons why are completely understandable.

“During my entire life there has not been a big space for anything close to a project like this one, but this time we had the space, and that’s what was the biggest key to this whole thing,” he affirmed. “A lot of people did complain about the demolitions but only because they were more focused on their memories of the past instead of caring about the future.

“And I was very clear during the press conference when I said that without the city council that we have today, I do not know if this announcement is made today or on any day,” McKenzie said. “For far too long the people in those positions were too afraid to take a risk like what we did, and no one knows what the future holds either. The credit for this should be given to Gloria Delbrugge, Ken Imer, ‘Herk’ Henry, David Miller, Don Atkinson, and Vice Mayor Gene Fahey.” 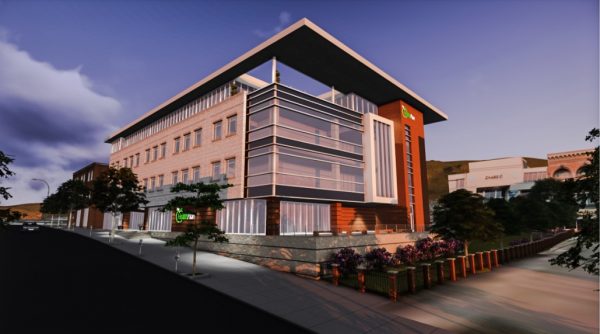 One of the renderings of the four-story facade that will locate within the 1100 block of the downtown district.

It was the Boury Center that opened in 1986, a four-story building that served as the home of Elby’s Family Restaurants, Boury Inc., and several other companies within Boury Enterprises. The Ormet Corp. operated out of the building after the  Bourys sold their empire to Elias Brothers in the early 1990s, and now it is known as Century Plaza, home to several business operations in downtown Wheeling.

“I personally believe having The Health Plan bringing their corporate headquarters to downtown Wheeling is going to have a huge impact on the future of the downtown district because it will add to the critical mass of people in the downtown area,” said Frank O’Brien, executive director of the Wheeling Convention and Visitor’s Bureau. “This means will see more restaurants, retail shops, and that there will be a need for even more entertainment at both the Capitol Theatre and at Wesbanco Arena.

“From what we saw today at the press conference, it appears they plan to build a beautiful structure that will also include some greenspace with the 1100 block, and that means it’s going to be a tremendous asset,” he continued. “It also means that when we are taking people around town we’ll no longer have to avoid Main and Market streets, and that’s one of the many reasons why this is a big deal. A really big deal, and it’s exciting for all of us in Wheeling.” 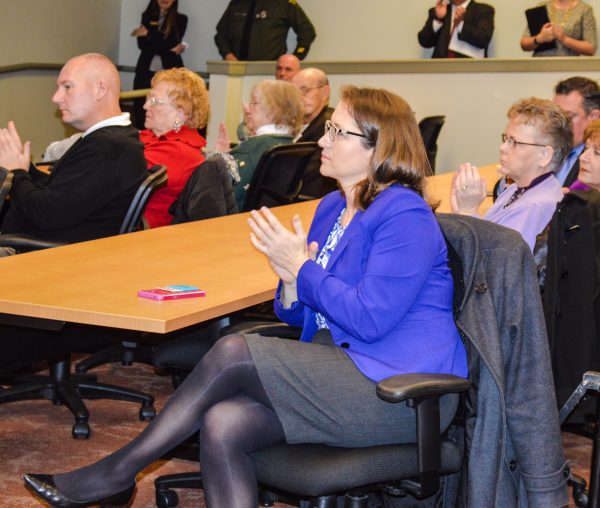 Wheeling Councilman Don Atkinson said the process of recruiting and negotiating with The Health Plan lasted more than a year because a few different locations for the construction project were considered. Now that the development has been finalized, Atkinson said he is looking forward to see what happens next.

“The private sector will follow this simply because we’re talking about 300 to 400 new people who are going to be working in downtown Wheeling, and those people are going to want to eat,” he said. “With this announcement following the news about the 80 new lofts that will be built inside the old Boury warehouse at the end of Main Street, I’m not sure how anyone cannot think that the downtown is finally turning around.

“I know there will be negative people out there, and that’s because there always is,” he continued. “But that’s one of the reasons why I am going to enjoy watching the ripple effects. I know the negative people will never be happy, and that’s OK, but in my opinion this is huge for the entire city of Wheeling.”

One business owner, Matt Welsch of the Vagabond Kitchen, said Wednesday’s announcement confirmed his decision to open his eatery in the downtown area instead of in the Friendly City’s suburbs. Currently, the Vagabond Kitchen is located on the base level of the McLure Hotel, but the restaurant will move to upper Market Street at some point in January. 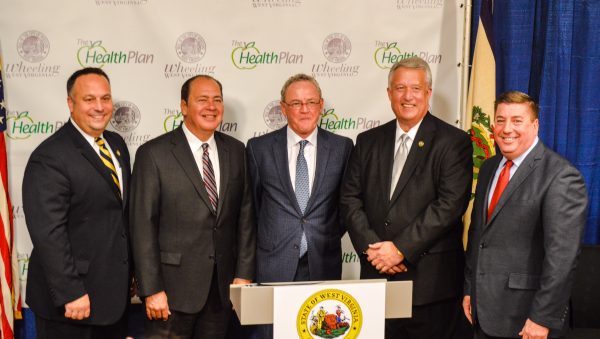 “When we first made the decision to go into downtown, some people thought it was a bad move. I said then, you’re going to be looking at a very different downtown Wheeling in a year, and that has certainly proven true,” Welsch said. “The past 18 months have been tough, and I can’t say there weren’t times I wished my business was in Woodsdale or Elm Grove, where we might see more traffic. However, I stand firmly behind the collective dream for downtown, and I’m excited to be a small part of what’s going on here.

“We not only can revitalize Wheeling, we are doing it. This new development will be a huge step up for all of us working towards a new downtown Wheeling, and it’s a boon to all of us in the greater Ohio Valley,” he said. “More jobs, more people, and the right vision to move forward. That’s a winning combination.”

George Dormas has been in business in downtown Wheeling for more than 30 years as the owner and operator of the Bridge Tavern and Grill, and his eatery has benefited from several economic developments that have taken place near his establishment on the corner of 10th and Main streets. First the Stone Center was purchased by RED in 2003, renovated, and is now workplace for more than 500 employees and home to 22 new loft apartments. 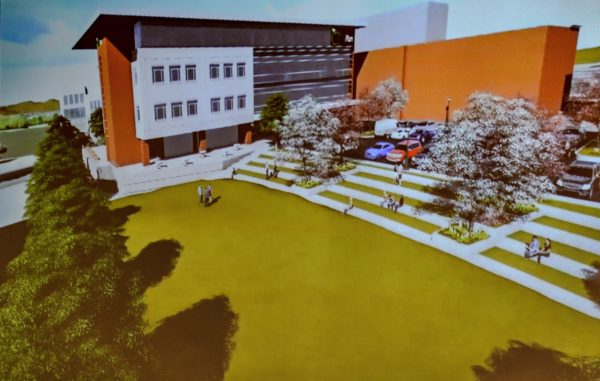 Beyond Marketing presented a video during the gathering Wednesday morning that offered a 3-D look at the new development. The link can be found below.

Then, in September 2009, the Wheeling Convention and Visitors Bureau purchased and re-opened the Capitol Theatre.

And now The Health Plan is coming to town.

“For the longest time this area of downtown was just so dormant, but not these days,” Dormas said. “We get a lot of the people who work in the Stone Center, and this new building is going to bring hundreds more into this area. When you’re in this business, every new job helps us and it is appreciated.

“And you know what? I am happy for Wheeling and for the people who work for the city,” he continued. “It’s been a hard battle but I know they have been working very, very hard to make of these things happen. So much is happening at The Highlands, and that’s a good thing, but I think it’s great that The Health Plan is happening here in downtown.”