As Christians on a 40 day journey through Lent, we often find ourselves “giving up” something that becomes a challenge to live without.  For some, it means giving up sweets, pop or snacking between meals.  Other people give up what they consider vices—like swearing or smoking.  Whatever the sacrifice, we think that conscientiously doing without something will remind us of Jesus Christ and the ultimate sacrifice he made.  The son of God who became man, executed on a cross, only to fulfill the scriptures and rise again to new life three days later. If it’s an earnest attempt to remind us of Christ and his cross, perhaps giving up that piece of chocolate today does help us prepare us for Holy Week and the promise of glory of Easter.

Others elect to do more of a good thing during Lent, like sacrificing time.  Perhaps spending more time in prayer, saying the Rosary, or attending a Holy Hour or communal penance service can help us grow closer to Christ and prepare for the Triduum. Still others give alms, support those in need, or give of themselves in very concrete, personal ways.  I read online recently about one family that is donating 40 bags of personal effects to charity or to those in need, averaging one bag per day.  This conscious effort of “giving up” more of ourselves is a wonderful way to use Lent wisely and follow the path of the Lord.

One tradition that has been handed down for generations in the Catholic tradition is the Stations of the Cross.  The Stations of the Cross is a devotional commemoration of Jesus Christ’s last day on Earth as a man. The 14 devotions, or stations, focus on specific events of His last day. The stations are commonly used as a mini pilgrimage as the individual moves from station to station. At each station, the individual recalls and meditates on a specific event from Christ’s last day. Specific prayers are recited, and then the individual moves to the next station until all 14 are complete. 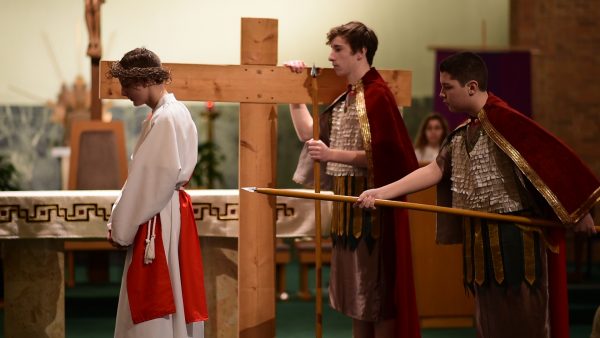 The Stations of the Cross are commonly found in up and down the Ohio Valley and across the globe in Catholic churches as a series of 14 small icons or images. They can also appear in church yards arranged along paths. The stations are most commonly prayed as a congregation during Lent on Wednesdays and Fridays, and especially on Good Friday, the day of the year upon which the events actually occurred.

As we grow closer to Easter, the faculty and students of St. Vincent de Paul Parish School in Wheeling present the annual “Living” Stations of the Cross, which can prove to be one of the most meaningful preparations for Easter, regardless of the Christian tradition you may follow.

The Living Stations will be held this year at 2 p.m. and 7 p.m. on Friday April 7 at St. Vincent de Paul Parish, 2244 Marshall Avenue in the Elm Grove section of Wheeling.

Performed as a dramatic interpretation by seventh and eighth grade students from St. Vincent de Paul Parish School in Wheeling, the annual performance of the Living Stations takes the traditional of the Stations of the Cross and brings to life the story of Jesus’ path to condemnation in the first scene and ultimately the fourteenth station when he is placed in the tomb. 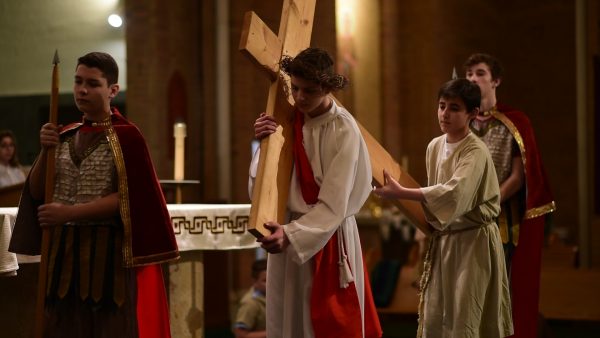 During this year’s production, Andrew Kent, the Aquinas Medal winner from SVS, will play the role of Jesus.  Mary is played by Mariam Dhahir, who portrays a very compelling rendition of the Blessed Mother.  Brennan Bachman plays Pontius Pilate, and John is played by Liam Buchanan.  John Anders and Mason Smith are the soldiers, and Jack Klug plays Simon of Cyrene.  Molly Brown, Cecilia Demasi, and Abigail Gerney comprise the group of Weeping Women, and Veronica, who wipes the face of Jesus, is played by Andrea Figaretti. The production is narrated and cantored by Emily Coram, Kayla Irwin and Adriana Schellhase.  Rounding out the ensemble are Braden Abate, Natalie Archer, Peyton Carpenter, Patrick Childers, Blake Graham, Lliam Gerney, and Peyton Smith. These students have done an outstanding job of preparing for this year’s performance, and the public is invited and encouraged to witness first hand their production.

Faculty and staff assisting with the production include Christine Anghie, Derek Dimmey, Beth Grasser, and Linda McGlumphy. Seminarian Joseph Wiley assists with lighting and A/V. The costumes are designed by parishioner Vickie Joseph. Michael P. Hamilton will serve as the production’s music director. 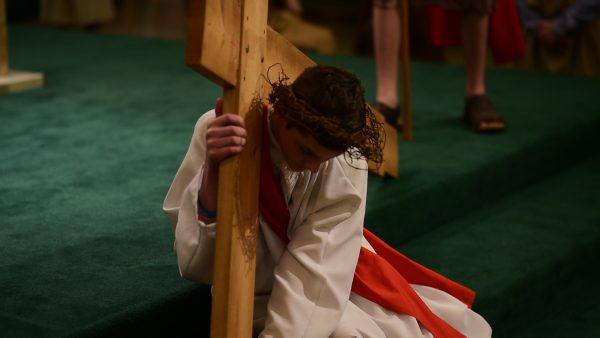 Since the Living Stations became an SVS tradition several years ago, I have found the experience of watching the youth of our school depict the path of the cross to be a very profound moment in my preparations for Easter.  The students’ commitment to living out their faith by honoring the sacrifice that Jesus made is an enriching, motivating moment for people of all ages.  It provides an opportunity to witness and feel the passion of Christ as a community of faith.

Each year as we depart the Living Stations, we go back to our homes better prepared to commit to the final preparations for Easter, for when Christ’s radiant love fills our hearts.

We adore you O Christ and we praise you, because by your Holy Cross you have redeemed the world!