Now is the time, Ken Peralta insists, for the community to become directly involved with a dual project along Grandview Avenue in Wheeling that will provide local consumers and school students with locally grown fruits and vegetables for years to come.

Peralta serves as the executive director of Grow Ohio Valley, a non-profit group that has been promoting local efforts to produce organic foods and sell the products using a plethora of different methods. The public will have a chance to offer their input during a two-day workshop that begins this Thursday at Wesbanco Arena.

“Here’s a chance for Wheeling to shine and control its own destiny. If there are people who care about this project, then they need to come out to the workshops because all of these people are coming in from Washington, D.C.,” Peralta said. “We’re a non-profit group dedicated to making Wheeling a great place, so I hope people get involved.

“There’s been a change in attitude here in Wheeling since I came here a few years back, but still there seem to be some people who don’t believe Wheeling can truly be a great place. Those are the minds we hope to change,” he said. “If someone has doubts about local farming, I hope they give us an opportunity to share with them the many benefits local farming offers.” 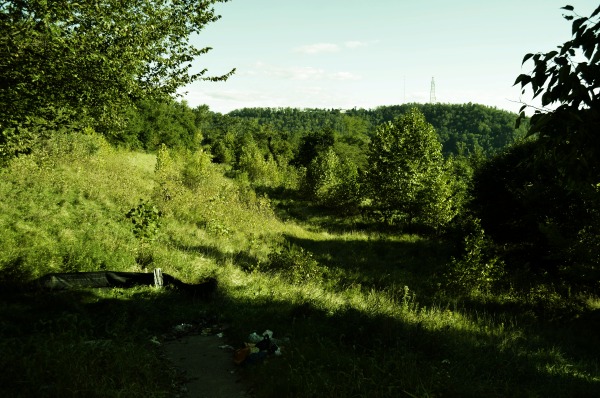 Lincoln Meadow is located on the west side of Wheeling Hill, and it offers visitors sweeping views of downtown Wheeling and the original Gateway to the West.

In 2014, the Wheeling National Heritage Corporation, Reinvent Wheeling, and Grow Ohio Valley, Inc. submitted an application for technical assistance from the federal Local Foods, Local Places Initiative. Wheeling was among the 26 communities selected from over 300 applicants to receive assistance. A team of experts will join local stakeholders in this two-day workshop to develop an action plan for the future development of the east and west sides of Wheeling Hill.

During the workshop, representatives of the U.S. Environmental Protection Agency (EPA), U.S. Department of Agriculture (USDA), U.S. Department of Transportation (DOT), Centers for Disease Control and Prevention (CDC), and the Appalachian Regional Commission (ARC) will be present to offer technical assistance.

The workshop will take place inside Wesbanco Arena’s club room tomorrow from 5:30 p.m. until 8 p.m. On Friday, the groups and interested community members will gather for a morning session from 9 a.m. until 3:30 p.m. at the First State Capitol Building in downtown Wheeling. Each session will include presentations on community livability and the role that local foods play in supporting it, plus small group-working sessions and discussions on the community’s vision and goals, and specific actions for reaching them.

These workshop sessions will lay out an action plan for moving forward. 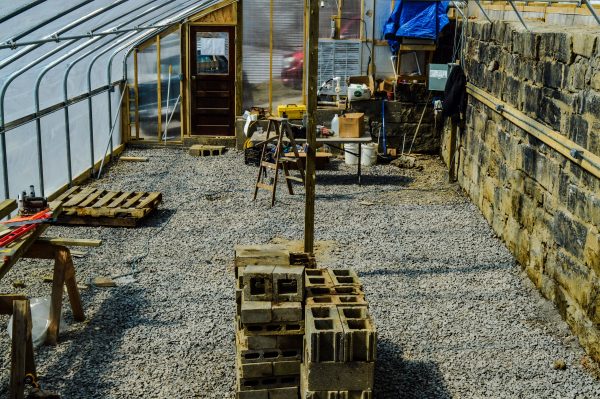 This is the interior of the front greenhouse.

“We’re still talking about the work that will need to be performed yet because we’re not doing the work yet,” Peralta said. “What has changed for us in a good way is that through the Local Foods, Local Places Initiative the planning process and the concept definitions are being handed over to the community.

“The point of these workshops is for members of the community who want to be involved with this to attend and voice their opinions and their ideas,” he said. “It is very possible to make something amazing from this incredible asset that we do have. I think people are going to freak out if they haven’t been up there because of the views the area offers.”

Jeremy Morris, executive director of the Wheeling National Heritage Area Corp., is eager to see how many community members decide to participate.

“This is a chance for more people to get involved with an effort that’s already had a pretty big impact here in the city of Wheeling,” he said. “The goals have been established, and now it’s time to move forward to accomplishing those goals with the community’s assistance.

“The first step to these workshop sessions is to see how many people are going to be involved, and to see what they bring to the table,” Morris continued. “Once that is assessed, it will be much easier to start accomplishing what needs to get done for the final project. What that is right now, we really don’t know yet, and that’s why I think it’s very important for the public to take part in this.” 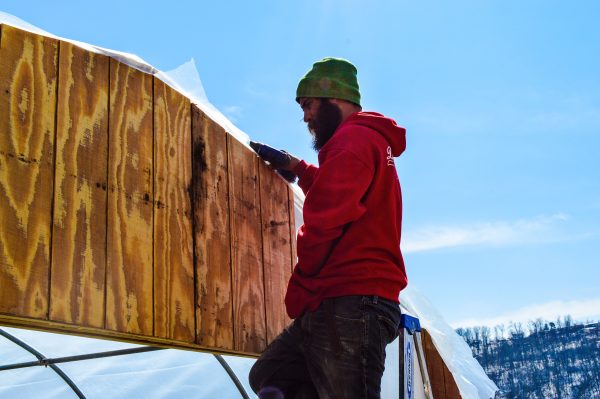 Dave Wallace has dedicated a lot of time during the winter months to ensure the greenhouses would ready for use come spring.

The established and funded project for the east hillside is to plant and operate an apple orchard with the ultimate goal of providing Ohio County Schools with as many apples as the school system needs during the course of each academic year. The plans for the west hillside, however, have not been finalized at this time, but a teaching farm for local children is one of the leading ideas at this time.

“That land really cannot be built on again because of issues involved with the re-establishment of foundations and things like that, but there are so many other possibilities,” Peralta explained. “So our attitude is to do something with it, and now is the time for educators, policy makers, and members of this great community to step up and make it happen.

“We refer to the west side of the hillside as Lincoln Meadow, and it’s a beautiful tract of land. We have some ideas like the teaching-farm concept, but so much more can take place up there,” he said. “The teaching farm is our mission, but if members of this community have additional ideas, they can express those during the workshops. Everything and anything is on the table. It needs to be a public place where people can come hang out.”

Peralta said water issues at the site need to be managed first, and the federal partnerships will come into play when tackling the drainage. 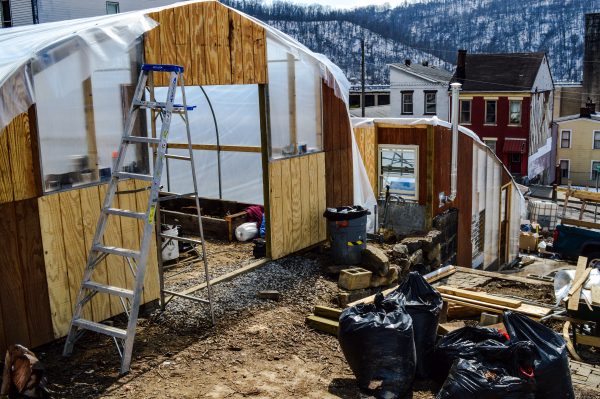 Swan’s dream began with one greenhouse, but the project expanded to include two grow houses.

“The Appalachian Regional Commission is bringing $20,000 into this project after we go through this development process with the community,” Peralta explained. “The development process includes these questions: What is it that we are doing here? And what is the plan to get it done?

“Once the ARC comes in there will be more fundraising efforts for both sides of the hill,” he said. “The east side orchard is also a priority because that project has been funded by a $25,000 grant from the West Virginia Department of Agriculture and the USDA. Those funds will be used for the fencing and the trees around the project, and then with a lot of volunteer hands we will have an orchard in the making.”

Peralta, Danny Swan, and several others with Grow Ohio Valley were present last week when the organization signed the lease with the Wheeling Housing Authority for use of both hillsides.

Peralta, Swann, and volunteers like Dave Wallace and Doug Flight have been instrumental with the construction of a pair of greenhouses on the corner of 14th and Woods streets in East Wheeling. Swan conceived the idea last year, and Peralta said that although the plan has been expanded, the facility will soon be in use.

“There was a lot more earthwork than we anticipated because of the amount of water that was running through the property, and that really came into play once the inches of snow we had here started melting about a month ago,” he explained. “But now we have twice the amount of space, and that’s where a lot of what we provide this year will begin their growth.

“We are increasing the amount of vegetables and fruits that we’ll grow and provide this year because of the reaction we received last year. It’s obvious to us that people do want to eat healthier,” Peralta continued. “And we plan to operate the mobile market more often this year because it’s important to get the food to the folks who otherwise would not have access to such products. Ultimately, I would like to see the mobile market in motion six days a week, but we’ll start the year with three-to-five days per week.” 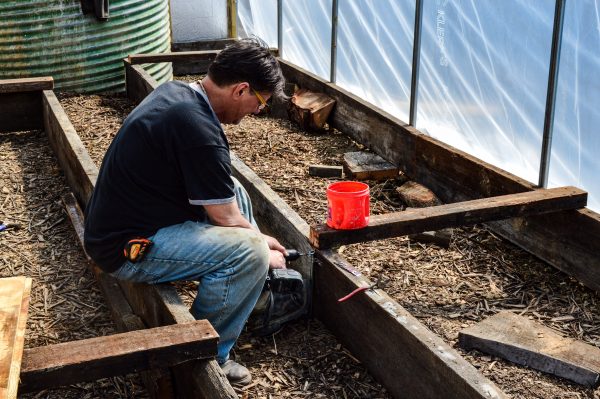 Doug Flight builds the grow boxes where this year’s tomato crop will be grown for local farmers’ markets and for Grow Ohio Valley’s mobile market.

“For $400, starting in June and continuing through 15 weeks, we’ll provide a robust box of locally grown vegetables and fruits,” Peralta said. “One of our goals all along was to increase the amount of farming that takes place in this region, and we are seeing that become a reality for this growing season. A lot of that food will go to the CSA program and to our mobile market that we take to all corners of this community.”

Grow Ohio Valley already has started its “Garden in Every School” initiative with an announcement last weekend during the “Growing Food, Hope and Health” event at Mount St. Joseph.

A part of this program is a contest during which students can win an organic vegetable garden for their school. Any group of students from Ohio or Marshall County can submit an entry, provided they have permission from their principal and at least one adult who agrees to supervise the garden with them. Students must also complete an application, answering why gardening is important, and creating a poster for their garden.

Students will win a prize that includes a designed, built, and planted organic vegetable garden for their school, and a visit every other week from Grow Ohio Valley staff. The total value of the prize is estimated at $6,500.  Entry instructions and applications will available starting Monday March 23, and can be downloaded from GrowOV.org/contest, or obtained from Kate Marshall directly (Kate@GrowOV.org / 304.218.8373).  Entries are due on May 11, and the winner will be announced on May 25.

The contest is being funded through monetary donations from the Sisters of Saint Joseph and a Community Impact Grant from the Community Foundation of Ohio Valley. Grow Ohio Valley, according to Peralta, will contribute technical support, materials and labor to construct the garden, and ongoing bi-weekly education  support to school faculty to the extent they want it.

“If we learn it early in our lives, we have it in mind for our entire lives,” Peralta said. “It’s great to see adults learning how to eat healthier, but it’s a wonderful thing when our kids learn how to eat healthy as early as possible. When that happens, there’s better chance they will choose to eat that way forever and live much healthier lives.

“We’ve made a lot of progress, and we have a lot of plans for the future, too, but we can’t get to where we want to be without our community’s input and support. And now is that time,” he added. “No one knows everything, and no one can accomplish everything, so we’re hopeful that our community will continue to embrace the potential that we have here and participate during their workshops.” 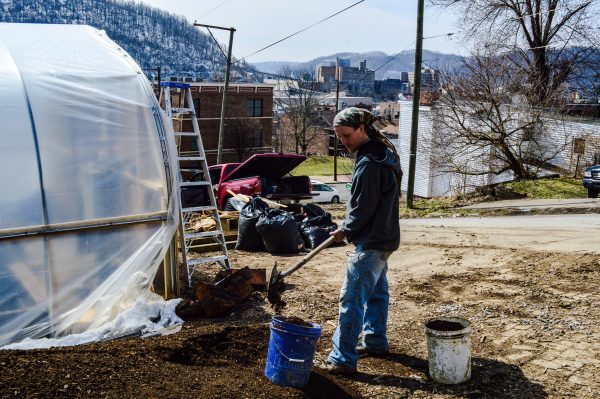