He reported progress, and he reviewed the many moves made by city government along with celebrating the residents behind the success that have created momentum in a Rust City left to be forgotten by all those living outside.

Wheeling Mayor Andy McKenzie spoke to a crowd of nearly 250 at Wheeling Island Hotel-Casino-Racetrack Tuesday afternoon during his sixth annual State of the City Address, and several local residents offered their impressions immediately following the lunch and presentation.

For the text the Mayor’s speech, please see our post: The 2015 State of the City Address. 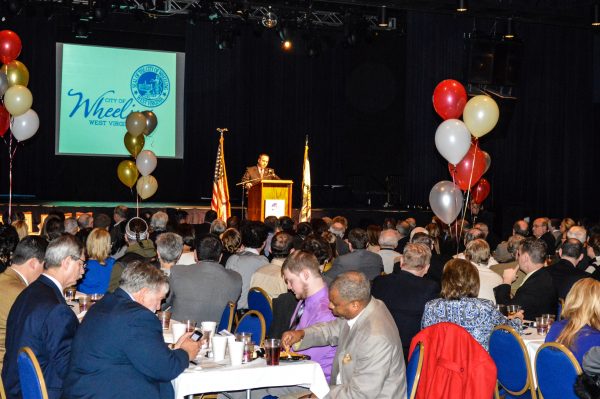 Nearly 300 people attended this year’s State of the City Address, a tradition started in 2010.

“I thought it brought a good, positive vibe to the community, and I hope the community embraces it and stands behind him,” said Wheeling resident Jenny Jebbia. “You can tell there are no agendas and ulterior motives that are self-serving because the only way Wheeling is going to progress is if everyone as a team joins forces to put Wheeling back on the map. He knows that.

“I think our young people have persevered and are striving to make a dent, to make Wheeling thrive,” she continued. “And I think our more seasoned community members need to embrace the changes. Sometimes change is hard, but if everyone decides to work together, I think we’ll see more and more people prove successful in our city.”

Claudia Raymer, the director of the Ohio County Family Resource Network, was impressed that the mayor realizes progress is a result of all residents cooperating and collaborating no matter what age they may be. 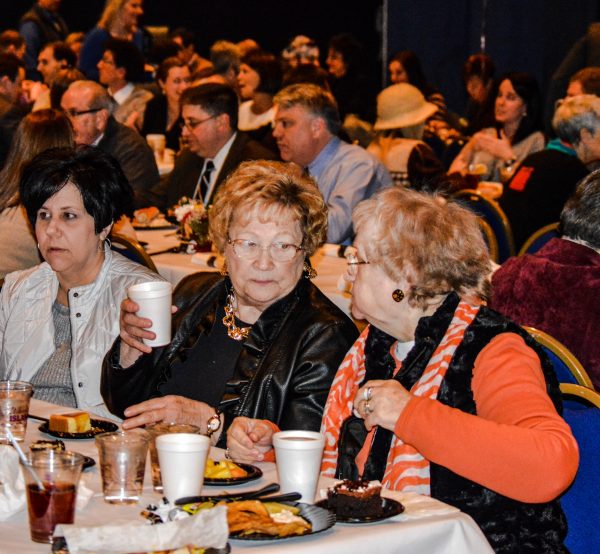 Ward One Councilwoman Gloria Delbrugge (holding the cup) has represented the Warwood area for nearly 12 years.

“I think Mayor McKenzie is very optimistic, and he outlined a positive plan for moving Wheeling forward,” she said. “I think he’s recognized that we have to expand and include the young people while also honoring the traditions that we have like The Linsly School and Coleman’s Fish Market.

“For Wheeling to finally move forward, it’s going to take everyone, not just a few people whether they are young, middle-aged or older,” she said. “That’s been true for a long time and I am very happy that it’s being realized now.”

McKenzie highlighted new and old businesses, and he also cited the city’s festival season that begins Memorial Day weekend and extends into October. McKenzie paid homage to one event in particular – the very first to settle in the downtown district – the Upper Ohio Valley Italian Heritage Festival that is staged at Heritage Port each third weekend in July. 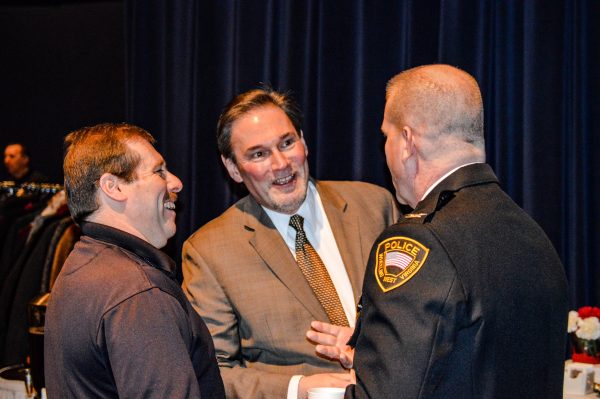 Local attorney Robert Gaudio chats with Wheeling Police Chief Shawn Schwertfeger and WPD Sergeant John Schultz. All three were mentioned during Mayor McKenzie’s State of the City Address for their contributions to the Wheeling community.

“I think the mayor did well to recognize the Italian Festival as the ‘granddaddy’ of all festivals in the downtown district,” said Bob Gaudio, a former chair of the event and the reigning Italian-American of the Year. “When I was on the board, we had the courage, the fortitude, and the foresight to take the festival that was already a huge event to the waterfront and make that area a venue for that kind of a celebration.

“Now, everybody is celebrating the waterfront while we celebrate each other,” he said. “That’s what is special about all of the festivals we have here in Wheeling, and that’s why I expect even more festivals taking place at Heritage Port in the future.”

Gaudio, a local attorney who has been a longtime cheerleader for the city of Wheeling, was impressed with McKenzie’s address. 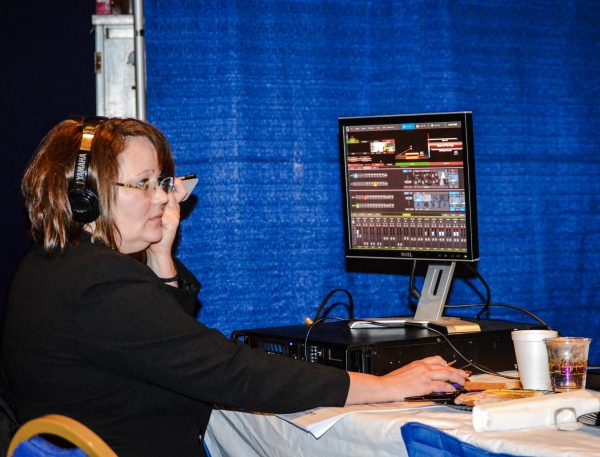 West Liberty University’s Theresa Gretchen was on hand to coordinate the video streaming of the Address for WLTV 14.

“The mayor covered a lot of ground, and he did a nice job of finding the pieces of Wheeling that needed to be recognized, especially guys like [2015 Wheeling Community Spirit Award winner] Rich Lucas,” Gaudio added. “It was a fantastic speech with a lot of foresight. That’s the issue. We’re not looking backward anymore. We’re looking at the new and saying, ‘This is good.’

“The fact that we had 223 new businesses open in Wheeling during 2014 says a lot, I believe,” he said. “There’s the new. New businesses, new life, new ideas, and that all is leading to a new Wheeling.”

Peter Holloway, a veteran financial planner for Hazlett, Burt & Watson, attended last year’s State of the City Address in February, and he heard from the mayor that imperative issues would be addressed in 2014.

“It was a great speech, and it’s great that he is complimenting all of the new businesses that we have seen open in the city of Wheeling during the past year,” he said. “And as someone who works in finance, I think the changes made in the pension plans are going to resolve a lot of issues.

A brief portion of Mayor McKenzie speech reminded the large crowd of something he stated about the city’s solvency during last year’s address:

“We will continue to look for ways we can right-size city government. Over the past few years, we have reduced personnel through attrition. We will continue to look for ways to shrink our workforce by reviewing efficiencies of services and departments. Employee costs – like pensions – continue to grow. These serious issues, like all other tough issues this council has dealt with, need to be addressed now so they’re not passed on to future generations.” 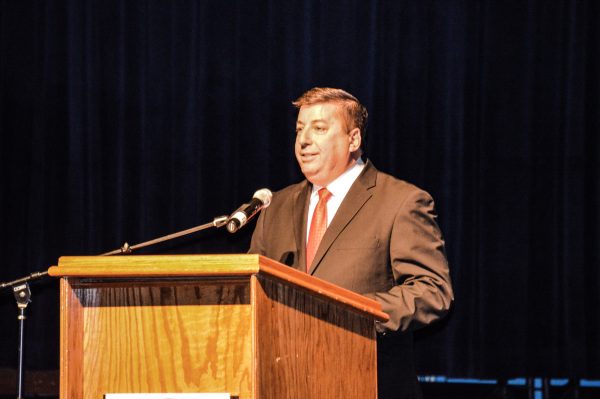 Wheeling’s Vice Mayor Gene Fahey served as the Master of Ceremonies for the event, staged this year at Wheeling Island Hotel-Casino-Racetrack.

“Too many cities are not paying attention to those issues,” Holloway said. “The communities that are not addressing pensions and other areas of spending are going to be in big trouble in the near future. The mayor and our council did Wheeling a big favor by taking care of it now instead of later.”

So what statement that he made this year does he expect to remind Friendly City citizens during his seventh – and final – State of the City Address in February 2016?

“To be honest, I have no idea,” McKenzie said soon as the event concluded. “I pulled that quote from last year’s speech because I don’t think anyone took me seriously when I talked about it. I think they were used to hearing politicians say whatever they wanted to hear, but then nothing would ever take place.

“I make no promises in the speech, and that’s on purpose,” the mayor said. “I talk about goals, and I talk about the issues that are facing us, and I say that they will be priorities. That’s been the case since we started doing this annual event in 2010, and I think if you check, you will see that we have taken care of almost all of what we have talked about.

“What we haven’t taken care of yet, everyone should know that it’s on the table for this year, that’s for sure,” McKenzie added. “We’re trying to rebuild a foundation that’s been allowed to crumble so that we can build again, and I think anyone interested can look around and see real growth in Wheeling, W.Va.” 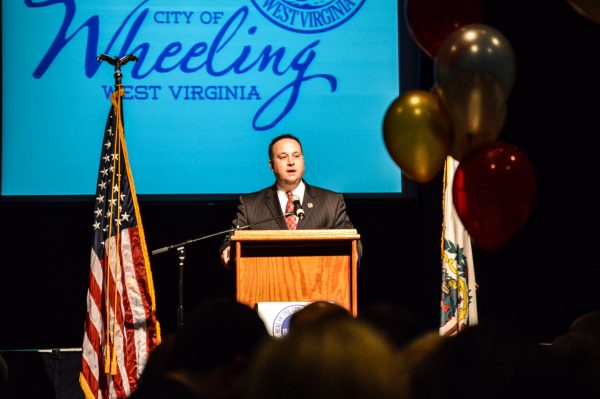 Mayor Andy McKenzie discussed the changes that took place in the Friendly City during the course of the past year, and he also told those in attendance to watch downtown Wheeling closely in 2015.