Looking for Home: Rebecca Harding Davis and Me

It seems fitting that my debut article for Weelunk.com is about my search for celebrated writer Rebecca Harding Davis’ (1831-1910) Wheeling home. After being gone from the Valley for 12 years, I felt desperate to reacquaint myself with the region. While studying English at West Liberty, I had become fascinated by Davis’ life and writing. My interest in her grew during graduate school at Ohio University, where I was introduced to other great works of Appalachian literature. I vowed that if I ever came back to live in the Valley, I would go in search of Davis and her Wheeling home. I wanted to walk in her steps. I wanted to see where she lived. I wanted to stand on the street where she would have looked out on the throng of factory workers leaving the mills, dirty-faced and coughing, at the end of a turn. 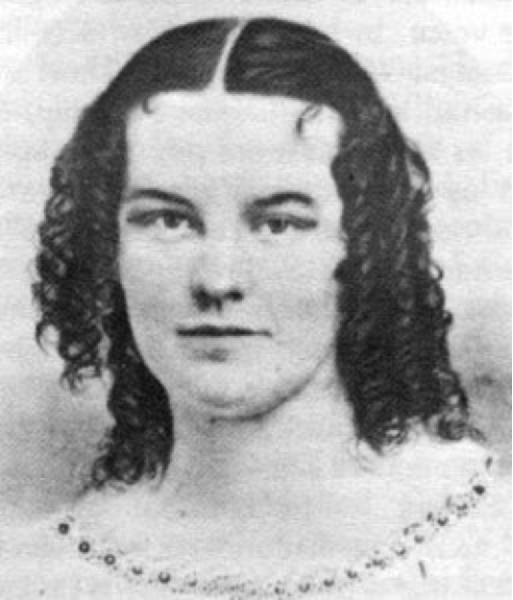 After moving back to the Valley in 2008, I began looking for clues about Davis’ home by re-reading first her memoir, Bits of Gossip, and then Life in the Iron Mills, her celebrated and controversial novella about mill workers in a town modeled after Wheeling. When it was published in the Atlantic Monthly in 1861, few people had ever heard of Davis, but that all changed quickly as people around the country read her story of a gritty, unjust world behind factory walls. Davis is credited with being one of the first American realist writers, preceding the height of the movement by more than 20 years, including works by William Dean Howells, Stephen Crane, and Upton Sinclair.

Prior to the overnight acclaim of Life, Davis graduated from Washington Female Seminary in Pennsylvania and wrote for the Wheeling Intelligencer. While in Wheeling, she lived with her parents, Rachel Wilson and Richard W. Harding. They had moved to Wheeling when Davis was 5 years old. 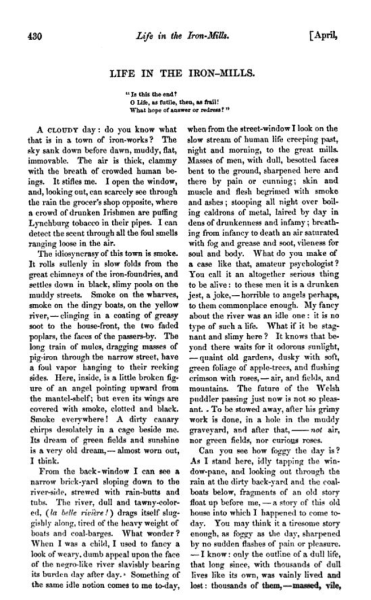 Like any good literature student, I was determined to pay homage to Davis by finding her Wheeling home. Despite the hours I spent in the Ohio County Library and online archives through my university, I could not find an address. I pored over messages in internet groups, but no one seemed to know the answer to my most sought after question.

Meanwhile, I had re-established myself in the Ohio Valley. I got married to a Wheeling native at Oglebay Park, moved into a beautiful 1920’s home in Woodsdale, and set about in search of my own little community in the Friendly City. I continued searching for Davis’ home and began teaching Life in the Iron Mills to my students at California University of Pennsylvania. I explained to them that by the time of her death in 1910 the bulk of Davis’ estimated 500 publications had been forgotten, in part eclipsed by the success of her son, Richard Harding Davis, who had become a well-known journalist and playwright.

In the early 1970s Davis’ words were resurrected after the great American writer, Tillie Olsen (best known for her short story, “I Stand Here Ironing”), discovered a serialized copy of Life in a thrift store in Omaha, Neb. A new edition with a foreword by Olsen appeared in 1972, and the novella has been in print since. Thanks to Olsen’s efforts, new generations of American scholars and writers have had the opportunity to see Wheeling and its mill life just as it was before the Civil War and the abolitionist movement changed the physical and moral landscape of the region and the nation.

I had nearly given up on ever finding Harding’s home when I decided to search one last time. Thanks to the kindness of strangers, I discovered that other researchers were looking for her home, too, including Dan Bonenberger, associate professor in the Historic Preservation Program at Eastern Michigan University, and Jennifer Riddle Harding, associate professor of English at Washington and Jefferson College. Thanks to the efforts of the Ohio County Public Library Archives and the writing of Sean Duffy, the mystery of Davis’ home was solved with the publication of a picture of Arion Hall on ArchivingWheeling.org on January 27, 2015.

As it would happen, that photograph, taken of Arion Hall at the time of a German festival known as Saengerfest in 1906, shows Davis’ Wheeling home as it was just four years before she died. At that point, however, she was widowed and living with her famous son, Richard, at his home in Mount Kisco, N.Y. The picture shows a common-looking Victorian era home on 20th Street (then Webster) between Arion Hall and the Second Presbyterian Church. (For a terrific, animated view of what the street then and now, see Adventures in Archives: Histories Mysteries Solved.) 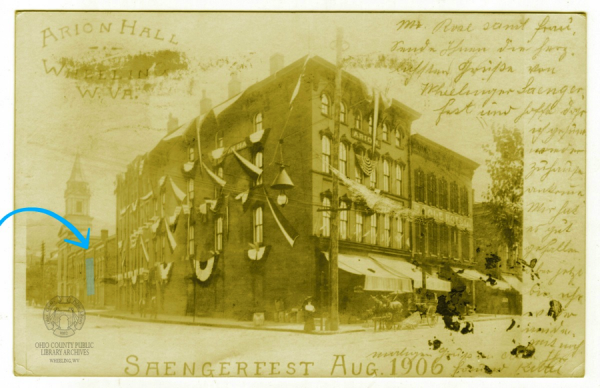 The Davis home on 20th Street (then Webster) in Wheeling

The house is gone now, but discovering its location at long last provided a mix of excitement and, surprisingly, relief. It seems that somehow in the past seven years since my return to the Valley, I had lost much of my near obsession in the distance between here and there and now and then. These days I am much more interested in today and tomorrow for me and the city of Wheeling, because, like it or not, neither of us is who we used to be, and we will never be those things again. Change used to scare me because I believed it meant rejecting the good things that happened in days gone by. In reality, change is essential for new beginnings, and writers like Rebecca Harding Davis knew that truth and led the charge, not just for Wheeling, but for the whole of American literature and culture.

In the preface to her memoir, Bits of Gossip, she writes that everyone has an important story to tell, “not the story of his own life, but of the time in which he lived.” That is my aim as a writer for Weelunk.com and beyond. Like Davis, I plan on telling my story/Wheeling’s stories as they are today, unvarnished—beautiful and ugly—but always and forever true. I believe the future of Wheeling is boundless. We should honor our past by helping her and her citizens reach their fullest potential.

Editor’s note: A previous version of this story incorrectly identified Jennifer Riddle Harding as a descendant of Rebecca Harding Davis.