Mabel jammed the gear shift on the steering column of the hulking 1952 Nash Ambassador into what she believed was first gear. Then, she took her right foot off the brake pedal, shifted it over to the gas pedal and eased up on the clutch with her left foot. The big car lurched forward with a neck-snapping jerk, and the engine stalled into silence. She leaned forward in frustration until her forehead came to rest on the big thick black steering wheel. She wanted to cry. 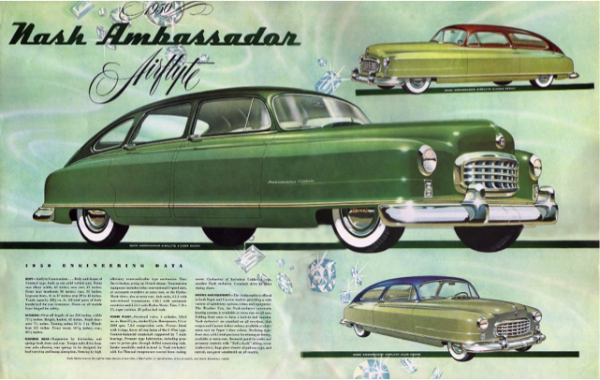 The Griffith Family’s 1952 Nash looked something like this. (Wikipedia)

“That’s okay, Mabel,” said the deep-voiced Russell Rogers, an old neighbor from the South Wheeling days who, as today’s driving teacher, sat in the passenger seat. “That happens to everyone once in a while. I think you were in third instead of first. Let’s try again.”

So began the young widow’s struggle to restore mobility to the little family that was still coming to grips with the death of George Griffith. Her blind mother, Lizzie, was incredibly helpful taking care of Terry, age 7, and the baby, Gerry, a 5-month old, but true independence would elude the family until Mabel mastered the monster auto.

For nearly two months, the family’s car sat in front of their Columbia Avenue home, just where George parked it before his heart attack. Mabel had relied on the kindness of neighbors and friends to take her grocery shopping, to church, and to Gerry’s frequent doctor appointments where efforts continued to fight the infection that had settled in his knee when he was a newborn. 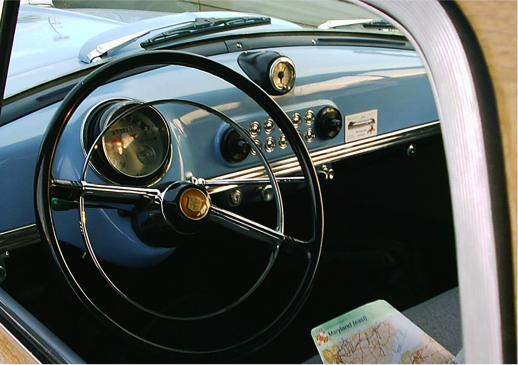 Lizzie’s inventory of the products she sold by telephone was getting low, and it would require a drive into the Oakland neighborhood of Pittsburgh to restock. The thought terrified Mabel, but it was a challenge she would have to work toward because the business brought income to the cash strapped family and friends couldn’t be asked to make the day-long journey for them. There was simply no way around it, she would have to learn to drive the big, manual transmission, non-power-steering Nash.

George purchased the car used from a man named Mr. Dewey at Wheeling Nash, which was located at 800 National Road, and it had served the family well. George made driving the huge car look easy, and he shifted gears and steered the beast over the streets of Wheeling and Pittsburgh with ease. He was so good at it that Mabel had never taken note of his driving skills. She just concentrated on serving as navigator-in-chief on their excursions for business and pleasure.

After much practice and a healthy taxing of her instructors’ patience, she began to get the hang of steering and gear-shifting the giant car. She started by slowly cruising the streets of Elm Grove, past Kempels’ confectionary on Center Avenue and Kruger Street School, past St. Marks Church and all the way out Kruger Street and down past Patterson Ballfield to the Lion’s Clubhouse on the bank of Wheeling Creek. Then it was time for the big challenge, a drive to Oglebay Park “the back way.”

“The back way” meant Peters Run Road, a narrow two-lane highway that weaved up a valley, from National Road past schools, slag piles from nearby coal operations, a beer joint or two, and a smattering of houses, some with chickens prowling the grounds. But first, she had to get past a gauntlet of U.S. 40 traffic lined by busy businesses like Dobbins Gulf Station, Elliott’s Sunoco, the Princess Theater, Scott’s Lumber Yard and, most intimidating of all, Wheeling Machine Products where trucks and shift-change traffic clogged the road until well past the new Fort Henry Motel. Then, it was a cautious left turn onto Peters Run.

Thinking about it made her nervous. She wasn’t used to manipulating the tank-like vehicle in heavy traffic. She began to feel her stomach churn.

She and her instructor were just past Dobbins’ Gulf station when she noticed the flashing red light in her gigantic rear view mirror. It was a Wheeling motorcycle patrolman, and he had a very serious look on his face. Panicky, Mabel flicked on the turn signal and awkwardly steered the behemoth on wheels to the curb. Then, she brought the big car to a stop and immediately stalled out with a series of jerks, forgetting to depress the clutch.

“Don’t be nervous,” her instructor for the day advised. “Just be calm and answer all his questions and you will be fine. We will need your learner’s permit and the registration.”

“I didn’t do anything wrong, did I?” Mabel asked as she cranked down the car’s massive window with a squeaky black handle. There stood a short policeman in a leather outfit topped off by a shiny white helmet. His badge caught the sun and reflected it back into the novice driver’s eyes. It was Officer Paul Eddy, the most well-known motorcycle cop in Wheeling.

Officer Eddy had a reputation of being quite stern, but fair and friendly once he knew you. 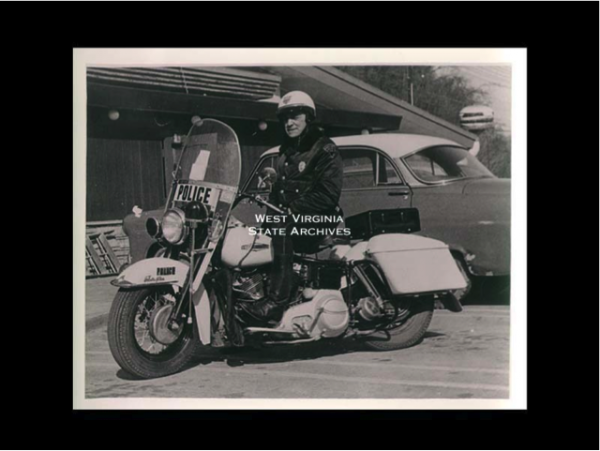 Officer Paul Eddy aboard his motorcycle in the 1950s. (WV State Archives)

Mabel had seen him direct traffic many times in Elm Grove with authority and flair. He often manned the traffic light control booth that stood at the high point of the hump bridge that took U.S. 40 over Wheeling Creek next to Monument Place and helped children attending Bridge Street School get across Rt. 88 at its intersection with National Road. He loved the children. They were terrified of him, as was Mabel at this point.

“You were going a bit too slow,” he said to Mabel who didn’t know quite how to react but held out her learner’s permit with a shaky hand. “Everything okay?”

Officer Eddy took her permit but didn’t look at it.

“Mabel Griffith,” he said. “Was George your husband?”

“Mrs. Griffith, we had coffee and a smoke together every work day for three years at Islay’s in the Grove” he answered. “We both took breaks at the same time. He was a hell of a guy. I’m sorry we lost him. I also spent some time in one of your father’s stores a few years back. You probably don’t remember.”

Mabel had no idea that her husband, the long-time Elm Grove mailman, had been friends with the intimidating motorcycle cop or that the cop had been one of those many boys who spent time in Tom Minns’ stores. George had never mentioned it. But, George really didn’t talk that much.

“Fact is, Mrs. Griffith, George did me a few favors over the years.” Officer Eddy explained. “Nothing big, mind you, but just little things that helped out now and then, and I always appreciated it. So, if there’s anything you need, I hope you will not hesitate to ask.”

Mabel and her instructor glanced at each other and she gave a smile.

That’s how Mabel received a police motorcycle escort through the National Road traffic jam past Wheeling Machine Products, the Fort Henry Motel, over the S Bridge and onto Peters Run Road. Officer Eddy led the way precisely at the 35 MPH speed limit with his red motorcycle light shining and Mabel nervously following him through the pathway he cleared. It was out of his jurisdiction, but Officer Eddy led the way up Peters Run Road all the way to the intersection of Route 88. Then he beckoned Mabel to follow him through Oglebay Park, past the Oglebay Mansion, and down the steep winding hill to where the road met US 40 at Vance Presbyterian Church. She followed him as he turned left and followed National Road down Chicken Neck Hill, past Buch and Donovan Drug Store and the old bowling alley across from Emhurst, old man Bloch’s former mansion. It was a straight shot from there to Elm Grove after passing by Greenwood Cemetery, Triadelphia High School, and Wheeling Park. She passed slowly by Robert Hall men’s store, the old Windmill Quaker State gas station, Upton’s Gift Shop, and Hoge Davis Drug Store, Seibert’s Restaurant and then the First National Bank building.

Officer Eddy did not abandon his mission until he passed the A&P, Monument Place, and Elm Grove Methodist Church on Kruger Street, turned right on Columbia Avenue, and pulled up in front of Mabel’s house. Mabel didn’t even know Officer Eddy knew where she lived. She pulled in behind him, expertly depressed the clutch, applied the break, turned off the ignition and left the car in first gear. The veteran policeman gave her a wave with his gloved hand, gunned his engine and pulled away. Seven-year-old Terry stood with his mouth open at the living room window watching.

Mabel and Officer Eddy never really had a conversation after that. But he would smile and give a gentle salute with his gloved right hand as he directed traffic in a busy intersection, and she would drive slowly by in her gigantic car. She felt safe and happy that someone of power and authority was out there on those frightening streets looking out for her and her children.

Over the coming years, Officer Eddy would have occasion to yell at the Griffith boys for one infraction or another, like riding double on a bicycle or not crossing a busy highway at the crosswalk. He never let on that he knew the family, but to the boys he always seemed to be watching.

“Don’t ever let me see you do that again,” he once barked at Gerry after watching the young lad pedal his bike on the sidewalk just barely in control as another boy held on tightly on the back of the big two wheeler.

To the boys, he was stern scary Officer Eddy. To Mabel, he was a patient watcher who looked out for her family’s safety in honor of a friendship that developed between a cop and a mailman at a back table at the Elm Grove Islay’s over coffee and cigarettes. It made her feel good.

By the time a few more months had passed, Mabel completely conquered the mysteries of driving the hulking Nash automobile, and the confidence she had managed to gain allowed her to restore mobility to her family, continue Lizzie’s income, and move forward toward total independence.