Only three weeks remain in Bennett McKinley’s “Meet Me in the Alley” art project, and he remains hopeful that he will reach his goal of photographing at least 1,000 people in Lane 9 in downtown Wheeling.

McKinley, owner of Bennett McKinley Photography in Wheeling, will continue meeting with those wishing to participate each Sunday afternoon (including today) from 1-2 p.m., and on Tuesday evenings between 6-7 p.m. The alley is located between The Professional Building and the Victoria Theatre on Market Street. 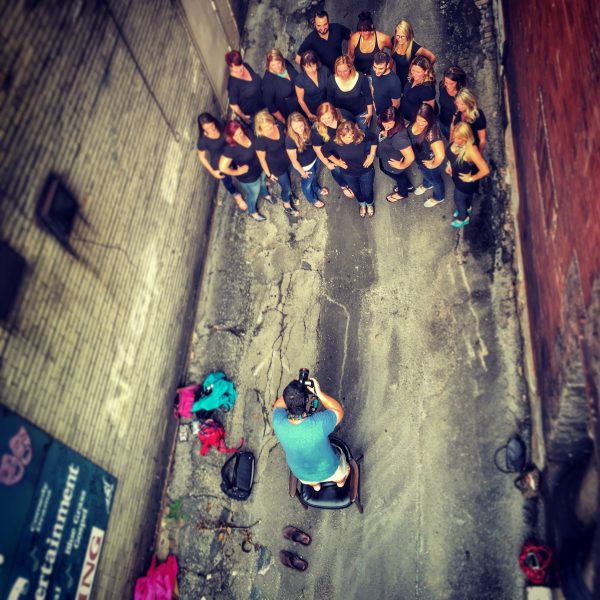 Bennett McKinley hopes to attract at least 1,000 local people to participate in the project. He needs approximately 300 more to make that a reality. (Photo by Glenn Elliott)

“I am ending it for a couple of reasons, and one of them is because my wife and I are tired,” the 29-year-old McKinley said with a laugh. “There have been days when 10 to 20 people have come down to the alley, but I have had other days when zero people have shown up. But I know by putting an end date on it, more folks are likely to show up because they have wanted to be involved for a while.

“I am also hoping that when THE final day arrives that I will have many more folks show up,” he continued. “I did the same thing before the gallery show, and 65 people suddenly showed up at an alley along Market Street. “I don’t want it to seem like this hasn’t been worth my while because it certainly has been. I just really want this to end on a high note, and that’s why we think this is the best way to go about it.”

Thus far McKinley has photographed nearly 700 participants ranging in age from 2 months to 86 years old, and the majority of those who have met with him involved first-time encounters. 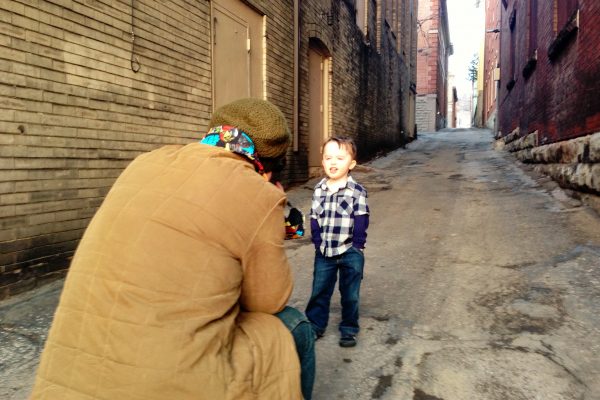 One of the first photos taken during the “Meet Me in the Alley” art project was McKinley’s son, Louie.

“It been such a wild ride,” he continued. “When we have had people showing up, we had a lot of people on Market Street talking about Market Street and downtown and also about the arts in Wheeling. It’s been very powerful, and that’s not my doing; that’s their doing, and it’s been very cool. And it is neat to think that I played a very small role in that.

“It is possible to reach my goal of 1,000, and I am still going to hold out hope that I reach that number,” McKinley said. “If it’s a few less, I’ll be fine with whatever number I end up with because of how fun this has been.”

Once the end of September arrives, McKinley will immediately begin working on a second gallery show similar to the event he staged on the third floor of the Wheeling Artisan Center on July 31, 2014. He also is planning to publish a book that will feature each and every person who chose to participate. 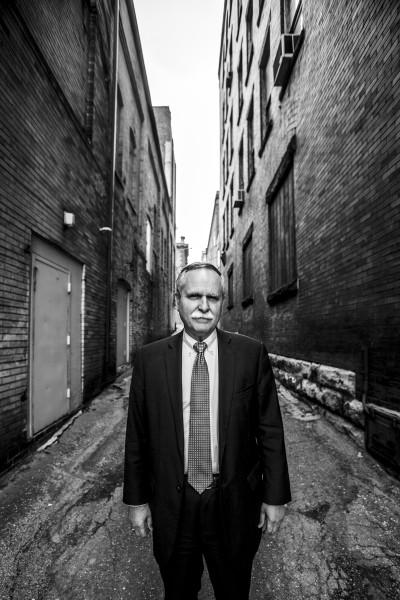 “I will do another gallery show at the end with all of the photos. There’s no sense in excluding the original 313 that I had up for the first show. The trick is going to be finding several things, including a space large enough for all of the photos and a way to pay for it. I’ve been thinking about the space the show would need, and I just don’t know at this time what would be big enough.

“I always would like to make a book out of all of them. I think that would be something that everyone who participated would like, so that’s another priority that I have at this time now that we are in the final month of the art project.”

A policeman, a firefighter, a steel elephant named “BoBo,” a herd of puppies, a bartender, countless children, businessmen, artists, real estate agents, chefs, bankers, restauranteurs, lawyers, preservationists, professors, military veterans, coal miners, council representatives, and the young, the old, and the middle-aged have all met McKinley in what is now a famous alleyway. He believes an estimated 95 percent of the people have been Wheeling residents. 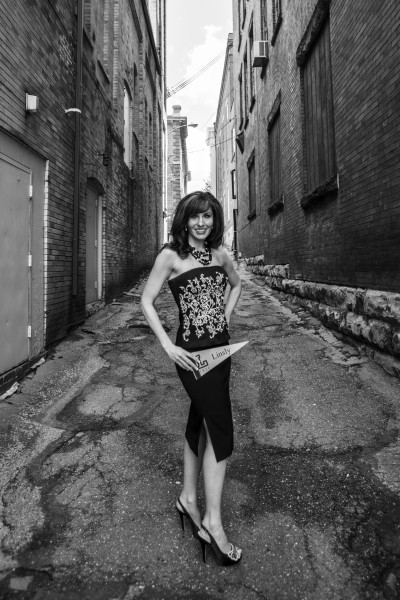 “In the very beginning it was just an art project, and I thought it would include my wife, Katy, my son, Louie, my folks, maybe five of my good friends, but it didn’t happen that way. It just kept going,” McKinley said. “And then when the project started to get a lot of exposure with the Weelunk article and WTRF stories, it really turned into something I didn’t really expect.

“The way this played out really reaffirmed our decision to move home and to stay here in Wheeling. I would say that raising Louie here in Wheeling is our number one motivation for being here, but this project has really cemented that,” he continued. “Having something like this that I can really be proud of and call my own means a lot to our family, and we are very happy about that because this is definitely where we want to be.

“I didn’t expect how this has gone. Not in a million years would I have expected this, and that’s why it’s been overwhelming at times because of the positive response that it has generated,” he added. “I would say that I knew between 15 and 25 percent of the people who have met me in the alley, and I’d guess that I was acquaintanced with another 25 percent. And then the rest were strangers and people that I had the opportunity to meet for the very first time who came out on their own free will, and that has been a great part of all of this because I had a chance to meet so many folks.” 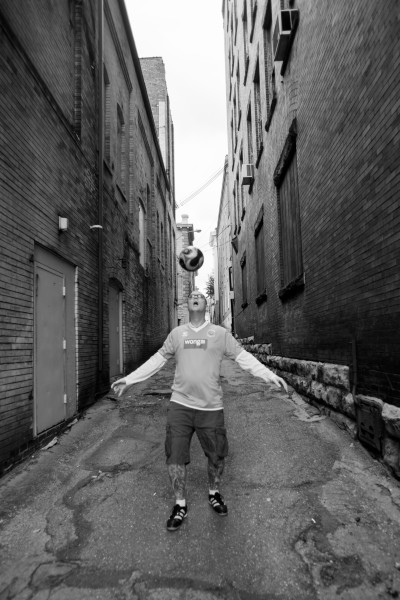 James Guy, a resident of the Warwood section of Wheeling, offered one of the most unique poses during the project.

Wheeling attorney Glenn Elliott, owner of The Professional Building, hired McKinley to take promotional photos in March 2014, and then, all of a sudden, Elliott became the first subject of the “Meet Me in the Alley” art project. Elliott has been present during many of the shoots that followed and has been amazed by the response.

“If ever there is an example of unintended consequences, it would be the ‘Alley’ project. What started as an offer by Bennett to take a few photographs of me at The Professional Building for marketing purposes has morphed into something much larger than any one person or thing,” he said. “It’s been both fascinating and rewarding to sit back and watch as Bennett has made bi-weekly trips down to 13th and Market Street to meet friends and strangers alike all for the simple purpose of capturing their essence in a simple photograph.

“The last few years in Wheeling have seen a considerable shift in attitude and perception about where our city is today and what the future holds. And the beauty of Bennett’s ‘Alley’ project is that he has both helped capture that renewed optimism percolating through the Friendly City while at the same time helping to contribute to it—all through the medium of art,” Elliott continued. “His portraits viewed collectively reveal the rich diversity of Wheeling personalities in a way that few other singular projects could reflect. And I congratulate him for that. It’s not an unreasonable prediction to assert that the fruits of Bennett’s labor will be viewed by generations of Wheeling residents not yet born, long after those of us here today have departed this Earth. That’s worth something.” 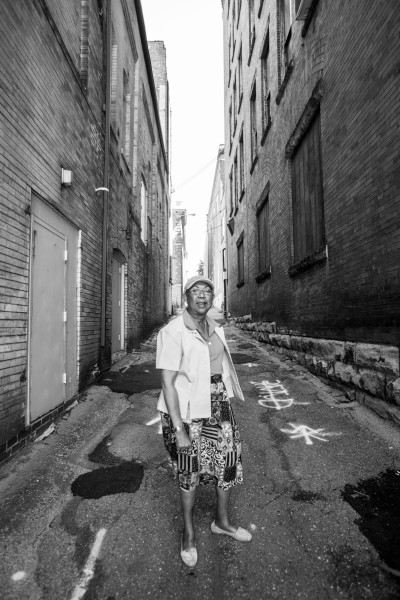 McKinley, too, feels the people of Wheeling possess a renewed hope for the future of the Friendly City, and this art project has proven something to him and his family.

“I kept thinking for a long time after we came home that Wheeling was on the brink of revitalization, but I think we’re now past that. I think we are growing and that we are revitalizing now,” he said. “I really don’t want to correlate this little photo project in the alley to anything that has to do with that, but I think it shows that there is an art scene here, and it has shown that there is a desire for projects like this to happen.

“You look now, and you see a metal elephant in the downtown, you see new murals being put up on building walls, and you see revitalization is actually coming true,” he continued. “People want to see art and have fun art projects in Wheeling, and that represents a big difference from when I was growing up here.”

(The cover photo was taken by Glenn Elliott)