I have an idea.

I don’t believe I get to see him enough, and it’s not because I’m on his “Naughty List.”

The reason is that when many downtown businesses opted out for the Ohio Valley Mall in the early 1980s, Santa went with them. No longer does his lap await the children of the Upper Ohio Valley at Stone & Thomas, Elby’s, Mendelson’s, or Boury Inc. In fact, St. Nick’s only appearance in downtown Wheeling these days takes place during the Perkins-Fantasy of Lights Parade.

And that’s just not enough, in my humble “still-a-kid-at-heart” opinion.

Not only would I like to see a few local businesses invite Santa back to the downtown district, but I believe a new Wheeling festival should be created in honor of the legendary gift giver. Instead of staging such an event at Heritage Port, though, I think Market Plaza would be the right location. Of course, it’s not something that could take place this Christmas season because of the construction work under way on Market Plaza, but next December could prove glorious.

I envision this festival lasting only a couple of evenings close to Christmas Day, and it could be limited to the north end of Market Plaza with the line to Santa leading to the Stone Center’s bottom-level lobby. His stage could be crafted similar to what was featured at the former South Wheeling furniture store Cooey Bentz. And while parents wait with their children, they could be surrounded by an atmosphere that would warm the heart of even Ebenezer Scrooge. 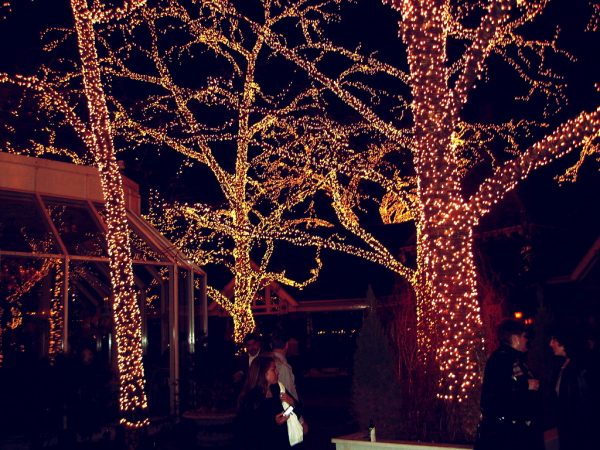 Locally owned businesses could set up tented tables full of their wares, whether it’s warm food and hot beverages or Christmas-related artworks and crafts. Christmas lights could be placed on the bottoms of the large trees that will remain post-construction, and church choirs could be featured singing all of our favorite Christmas carols during these evenings. Maybe, just maybe, the newly recreated Talking Christmas Tree (yes, the one from the L.S. Good Market Street window) could make an appearance.

Since this idea involves using the northern portion of Market Plaza, plenty of parking would be available inside the 10th Street Garage and along Market Street in the new spots being created by the current construction project.

It may even inspire the owners of the Stone Center – the Regional Economic Development Partnership – to return the white lights to the backside of the building.

The event could be dubbed “SantaFest,” and it could evolve into a tradition just like the Upper Ohio Valley Italian Heritage Festival or the Wheeling Vintage Race Boat Regatta if the same level of dedication to it is present.

It’s an idea. That’s all it is today. But if downtown Wheeling is truly re-inventing itself, can there be anything wrong with re-discovering the best of downtown Wheeling’s past? Could the memories of so many who still live here and those who have moved away actually lead us back to a few of the positive aspects that do not have to depend on the private sector to return?

I believe those recollections can, and I believe this valley is filled with great people who make amazing things happen each day of every year. And this could happen.

I “triple-dog dare” ya – close your eyes and envision “SantaFest.”