You could already hear the music as you walked toward the front door from the always-packed parking lot, and immediately you were met by the bouncer who, you knew, would need to see your ID.

Once you were granted passage, the circular bar was to the right, and the DJ booth, the stainless-steel dance floor, and the back bar were all on the east side of the dimly lit nightclub along National Road in Woodsdale. And the drinks were always strong, the dance floor always surrounded by men watching women disco, and the bathrooms seemed perpetually jammed most weekend evenings.

It was the Eagle Inn, but the establishment was not always as large or loud or flashy, and in the very beginning the Mid-City Motel was attached.

“There was a little diner on the south side of National Road, and I can remember going in there in the late 1960s with my dad and my little brother Phil, and we just started ripping all of the walls out of that diner,” recalled Gary Dietz, a son of one of the three original investors. “I think within five days we had something of a makeshift bar in there, and from the moment it opened, it was packed.

“The motel was on both sides of National Road, I believe, and the bar, which was much, much smaller than the new one, was the original Eagle Inn. It wasn’t for a bunch of years until the motel came down to build the second Eagle Inn,” he said. “In the beginning, it was my dad (Elmer Dietz), Bob Burke, and Fred Grewe. My dad was an insurance guy, Bob owned Warwood Tool, and Fred was in the radio business, and they were buddies who thought it would be a good idea to open the Eagle Inn.”

But once the new building was constructed at 836 National Road in the 1980s, the Eagle Inn joined the ranks of Fabulous Fannie’s, the Merrymint, The Rendevous, and the Electric Flag as destination bars each and every weekend during the late ’80’s and early ’90’s.

“But, ya know, the Happy Hour crowds were always big at the Eagle Inn, too. It started around 3 p.m. and went from there,” said Dietz, the owner and agent of Gary Dietz Allstate Insurance. “The people didn’t stay that late like they did on Friday and Saturday nights because of the work week, but it was a busy place right after work. The weekends, though, well, it was really the place to go for a lot of people. 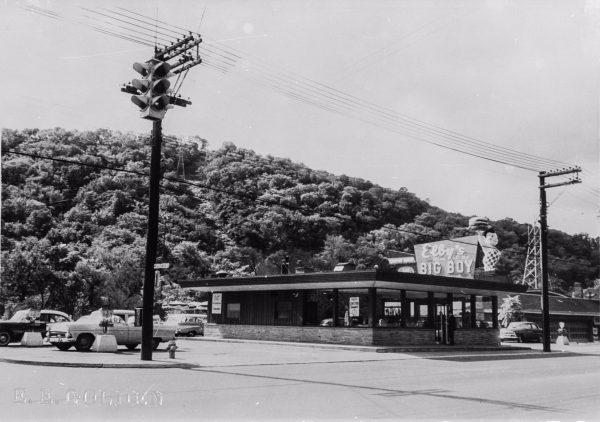 The original Elby’s Family Restaurant opened on National Road in 1956, 12 years before the original Eagle Inn opened its doors inside the Mid-City Motel.

“The Eagle Inn was a place where you could have had the governor, congressmen, senators, policemen, businessmen, and the local thugs all together, and there were a lot of celebrities who went in there, too,” he said. “Back then in that era, there were so many bars in the town. Every corner seemed to have a bar on it, but that’s when the world was a different place than it is now.”

The age of the patrons wasn’t a factor Dietz remembers, but there was an importance placed on sports, charitable efforts, and discretion at the Eagle Inn. Fights were quickly moved to the exterior by the constantly circulating staff, face slaps were applauded, and sighting of the Coors Light Beer Wolf became a regular occurrence on Saturday nights in the late 1980s.

“At the Eagle Inn, there were people of all ages, from 18 years old to 70, and there were always Euchre games going on, the Eagle Inn Football Club was huge for a lot of years, and there were some of those poker machines in there just like there were in every other bar,” Dietz recalled. “And I played on a lot of Eagle Inn softball teams on Sundays during those years, and we also played up at Oglebay after my dad started that league in 1956.

“It became the place for the who’s-who in Wheeling; it really did,” he continued. “They didn’t have too much live entertainment, but there was always that DJ, and the dance floor was stainless steel. The females would all be on the dance floor, and the guys would stand nearby until a slow song was played. Then everyone was on that dance floor.”

The original Eagle Inn opened at a time when Wheeling first began losing industry, and population slowly began to decline. According to U.S. Census reports, the city of Wheeling possessed a population of 54,000 residents when the Mid-City tavern opened, and by the time the Eagle Inn closed for the last time, the number of citizens had dwindled by nearly 18,000 in only 20 years.

“Without a doubt, when the Eagle Inn was open, it was one of the best times, or eras, for the city of Wheeling, in my opinion,” Dietz insisted. “And what’s funny is that I have no idea how anyone found anyone back then because we didn’t have cell phones or texting. All we had was a house phone that your mom and dad answered. 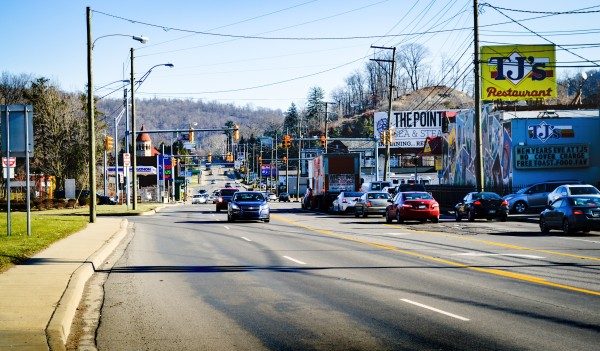 This  stretch of National Road in Woodsdale has long been a commercial strip, but many changes have taken place over the past four decades.

“I guess we just got into our cars and just went out and found whoever you found,” he said with a laugh. “For a lot of people, it wasn’t the first bar you went to, but it probably was the last stop of the night. Some people would come in for Happy Hour, leave, and then come back a few hours later, and they usually brought a lot of people with them, too.”

The last two remaining partners of the Eagle Inn have both passed away with Elmer Dietz first in 1997 and Bob Burke second in 2010. On a few occasions the partnership sold the business to others, but each time they would return to fix the issues and re-open their vision for the nightclub.

“That photo (used for this article) is the only one I could find from back then, and I think it’s because it’s from the final party. The photo has a lot of the people who had worked there or who had hung out there a lot,” Dietz said. “After that, it closed for good. I just can’t remember exactly what year it was when that was.

“Why did they close it? They thought it was just time,” he said. “The world was changing, and they were getting older, and fewer people were doing what they used to do because they finally realized that drinking and driving wasn’t a great idea.”

As is the case in every business district in the Friendly City, from Elm Grove to Wheeling Island, many changes have taken place east of the intersection of Mt. de Chantal and National roads. It starts with Taco Bell replacing Long John Silver’s, and the former Fostoria Glass Outlet is now a dentist office.

“That stretch of National Road really is completely different today than it was when the Eagle Inn first was first opened. There is Spic n’ Span Dry Cleaners, but Howard Johnson’s was where Bob Evans and the Hampton Inn are; Stauver’s Gas Station was where the Marathon is now; Burger Chef is Hardee’s now; and Rax was where Tim Horton’s is today.

“The CVS right next to the building was the Kroger’s, too,” he said. “And the corner where Sheetz is now is completely different. But, guess what? The building that still stands and has the AC Buffet in it now is the same building my dad and Bob built for the Eagle Inn. It’s been a few different places over the years since, but most times when I drive by all of those memories from those days at the Eagle Inn come back to mind.”