As a pre-teen boy in Wheeling, Court Micker found himself fascinated with everything involved with the Civil War, so that is why he climbed a hilltop within Wheeling Park.

High above the Doughboy statue beyond the playground is located the Soldiers and Sailors Monument, a memorial to citizens that defended the region that would become West Virginia on June 20, 1863. This monument, which weighs in at an estimated 25 tons, has a history of its own since being initially erected by the Soldiers Aid Society on the corner of 16th and Chapline streets in downtown Wheeling.

Initially, the Soldiers and Sailors Monument stood on the corner of 16th and Chapline streets in front of the former Ohio County Courthouse, and it remained there until that structure was demolished. The statue then arrived on the campus of Linsly Military Institute, where it stayed for two years. Then it sat, unassembled, along National Road across from where TJ’s Sports Garden sits today, and it stayed there for 28 years. 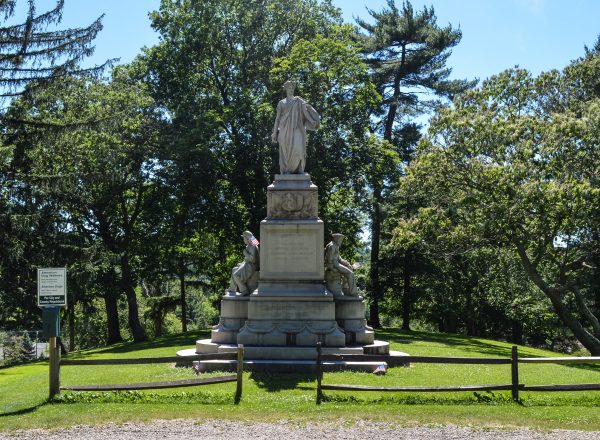 The monument has been located on this hilltop since 1956.

Yes, nearly three decades, from 1928 until 1956, when, finally the city of Wheeling and the Wheeling Park Commission scooped it up and moved it to where it stands today. However, it was re-assembled backward.

“Right now, the soldier and the sailor are on the wrong sides,” said Wheeling historian James Guy. “Where it is now is a nice location, but I really don’t think enough folks get to enjoy it on the level they would if it were placed next to Independence Hall. I really do think that is the right home for this monument.”

Yes, there is an effort to move the Soldiers and Sailors Monument a fourth time, and the movement also includes a repointing and renovation process that would be performed for the first time since a young Wheeling boy initiated such an effort 15 years ago. 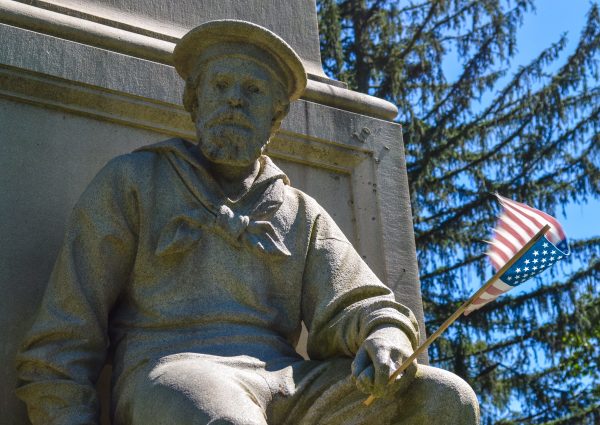 When placed at Wheeling Park the statue was not reassembled correctly.

“When I was 12 years old, I saw the monument was in disrepair, and so I asked the Wheeling Park Commission if I could take the necessary steps to raise money to restore the monument after it had sat there for many decades with no maintenance,” explained Linsly gradate and Wheeling resident Court Micker. “The monument was repointed at the time, but since then the repointing has been cracked away by water damage inside the monument. When the water seeps into the inside and then freezes during our winters here, that causes the monument to expand and contract, and that’s not a good thing for a monument that is as old as this one is.

“I think the primary concern is finding out what damage has occurred to the interior of the monument before you start taking it apart,” he insisted. “The monument has 11 different parts to it, so it’s a very involved process.”

The city of Wheeling owns the monument, and those officials, along with the current members of the Wheeling Park Commission, have approved a request form the city’s Civil War Monument Committee to relocate the Soldiers and Sailors Monument. The target date for the move is Memorial Day 2017, and the estimated cost for the project currently sits at $75,000. 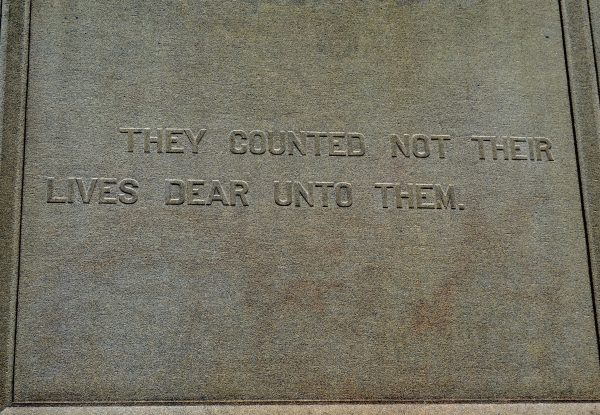 The Soldiers Aid Society commissioned the statue in 1880 and wished to make sure a message for the ages was conveyed.

The projected expenses are:

A patrons dinner will be held at the First State Capitol on Aug. 6 to officially begin the fundraising effort. The gathering is scheduled to begin at 4:30 p.m. with dinner set for 5 p.m. For tickets to the fundraiser, which will feature special guest Ed Bearss (best known as an expert on the Ken Burns documentary The Civil War), contact West Virginia Independence Hall at 304-238-1300.

“We are at the point where we have gained the approval from those who own and take care the monument right now, and we have also agreed to hired Gabe Hayes for the site design on the lawn next to Independence Hall, where the monument will be located,” said Rebekah Karelis, a committee member and the historian for the Wheeling Heritage organization. “We also have an agreement with Mike Major, who is a sculpture preservationist and the man who guided the move of the (Pollack) Monument from North Wheeling to where it is now at Heritage Port. 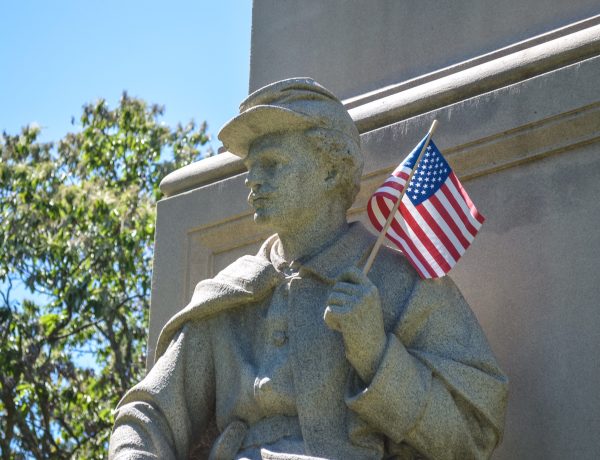 Created more than 100 years ago, the Soldiers and Sailors Monument is the oldest tribute to Union soldiers in West Virginia.

“But we have not reached the point where we have officially hired the company that will be in charge of moving the pieces of the monument,” she said. “We’re almost there because this was a move that we were considering five or six years ago, but then the Pierpont Statue project took precedence. But we’re back to this move because we believe it’s something that needs to happen.”

Micker has consulted with renowned sculptor Gary Casteel concerning the moving project in order to ensure safe travels for a monument he adopted more than a lifetime ago. Casteel reported to Micker the cost of the move currently could be unpredictable because the amount of interior damage has yet to be determined.

“It’s just something no one knows at this point in time because the monument has yet to be taken apart,” Micker said. “The Soldiers and Sailors Monument is made of cut granite, so that’s allowed it to erode over the years. In fact, some of the wording can barely be read now.

“And to do the restoration the correct way, the damage that’s taken place over the years has be addressed. There was a bronze sword that Lady Liberty was holding, the infantryman needs his bronze, Springfield rifle, and over the years there have been people who have tried to mask the damage by placing other things in those hands, but that has caused far more damage to it,” he explained. “It is, to my knowledge, the oldest recognized Union memorial in the state of West Virginia, and it honors the efforts made during the Civil War by the citizens from the region that ultimately became the 35th state in the country.” 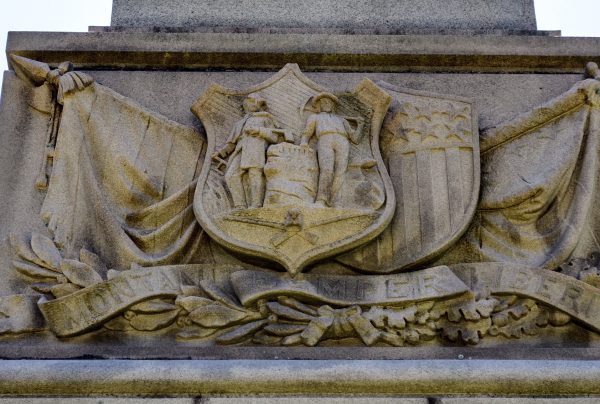 The translation: “Mountaineers are always free.”

No signage exists near the monument’s current location that explains its significance. It’s a tall, white statue that easily scaled by adults and children alike, but it is seldom understood by those who visit it. Guy, though, has learned the history, and that is why he hopes the transport of the soldier and sailor will go as smoothly as possible.

“And that’s because I truly believe this monument speaks to the people of West Virginia and what those people sacrificed so West Virginia could become a state,” he said. “I believe the inscription on the monument says a lot about those people: ‘They counted not their lives dear unto them.’ That really does say who we are as a people in this state.

“West Virginians come together, and that’s why we are seeing the great efforts that are being made by the people in this area for the folks who were flooded a couple of weeks ago,” he continued. “We get shoulder-to-shoulder to get things accomplished because it’s the right thing to do and not because there’s some monetary gain. Mountaineers are always free, and we do the right thing by one another.”