If the referendum ballot issue is approved by the majority of voters in Ohio County, businesses that serve alcohol within its borders will begin selling the Mimosas and daiquiris and domestic, imported, and craft brews beginning at 10 a.m. on Sundays instead of 1 p.m.

Several bills passed by the members of the West Virginia Legislature will impact residents of the Northern Panhandle, but this one will take a public referendum, and Ohio County is expected to be the first in the region to place the “Brunch Bill” on the ballot.

The legislation (SB 298), approved by the majority of the House of Delegates during the final week of the Legislature’s regular session, would allow alcohol sales to begin three hours earlier – from 1 p.m. to 10 a.m. – on Sundays and is projected to add as much as $20 million in additional tax-dollar collections throughout the Mountain State. 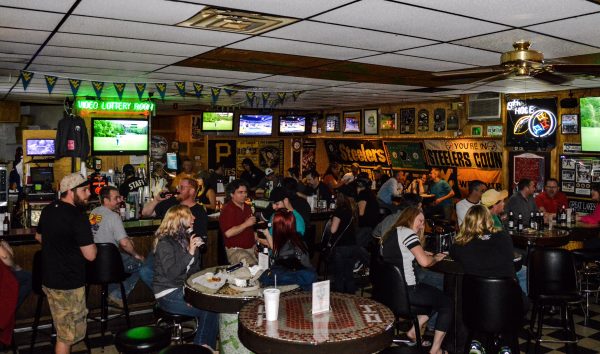 The 19th Hole on National Road currently opens at noon on Sundays but would quickly alter the hours of operation if and when the “Brunch Bill” is implemented in Ohio County.

Dels. Erikka Storch (R-3rd) and Shawn Fluharty (D-3rd) joined the majority of House members in approving the proposal 85-14, and similar legislation passed unanimously in the Senate in February. Members of the Senate then approved the House’s amendment to include the county referendums.

The early sales would be permitted to take place 90 days following its approval, and Gov. Early Ray Tomblin has 12 days remaining to sign it into law.

Although the state possesses four racetracks/casinos and several lodging-focused resorts that would benefit, including Snowshoe Mountain Resort in Pocahontas County, the Greenbrier Resort in Greenbrier County, and Oglebay Park in Ohio County, the House refused to advance similar bills in recent years despite strong support from the state’s tourism and hospitality industries.

This bill, though, is not exclusive to West Virginia counties with racetracks and resorts. County commissions in each of the state’s 55 counties can opt to place the issue on the November ballot. 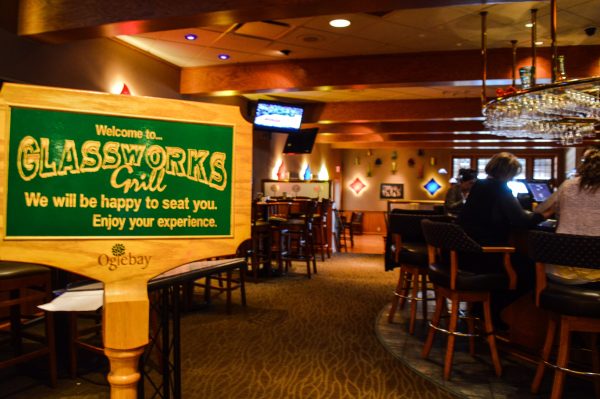 The Glassworks Grill at Wilson Lodge does not open until 1 p.m. on Sundays.

“We can’t put the cart in front of the horse, and that means we wouldn’t be able to have that vote until it goes into effect,” the commissioner said. “The law does not exist until then, and that’s when we can consider placing it on the ballot here in Ohio County.

“So if the governor signs the bill, that would mean we would be able to place it on the November ballot when the voters will be casting their balloting for a lot of different things, including the next President of the United States,” he continued. “Voter turnout is usually higher when a presidential election is on the ballot, so that means many more Ohio County voters would speak to this issue, too.”

Toni Chieffalo, elections coordinator for the Ohio County Commission, explained that a special election could cost the county more than $50,000. She also confirmed that the deadline to place the “Brunch Bill” on the November ballot is Sept. 30.

“Every so often we have a special issue on the Ohio County Ballot, but it’s not every two years or four years,” Chieffalo reported. “Most recently we had the special election for the table games at Wheeling Island, and a few years ago the two-officer ordinance in the city of Wheeling was repealed by the voters.”

Chieffalo also said her office has been busy processing not only voter registrations but also party changes. “There are a lot more this time around than past years who are switching over to Independent,” she said. “And they are switching over from both of the major political parties.” 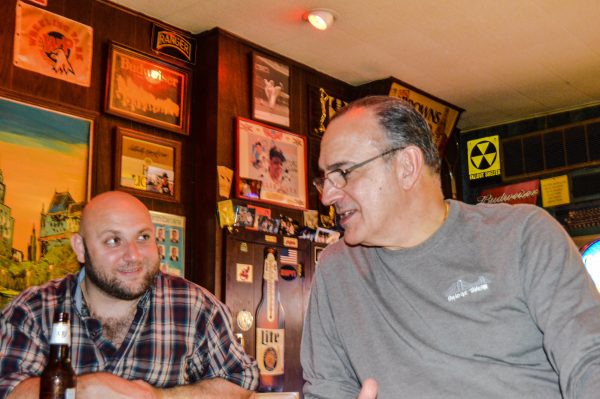 The Economics of It All

Angie Szalay, proprietor of the 19th Hole Restaurant and Bar on National Road, said not only will her patrons be able to order a Bloody Mary or a beer earlier, but her employees will benefit, too, because someone has to serve up those beverages.

“We’ll staff  the 19th Hole according to what game is coming on at 1 p.m. during the NFL season, or if there is something happening in Wheeling, but even it’s a different time of year with nothing going on, we will be here because this city loves its Sunday mornings already,” she said. “And we are very pro-‘Sunday Fun Day’ here, too.

“We love our Sundays and we also love our sports beyond the NFL. We have great crowds here for Bucco games, for the races, and for a lot of other events,” Szalay continued. “We’re chomping at the bit to get it all started, and I am sure that Ohio County voters will approve once we get the chance to vote on it.”

Ozzie Hyde, the former general manager of the Quaker Steak & Lube at The Highlands and now the owner of Ozzie’s Bar & Grill on Wheeling Island, said he expects to open earlier on Sundays but with two conditions. First, Ohio County must approve the measure via the referendum vote, and second, the state Lottery Commission would need to amend its Limited Video Lottery operations on Sunday as well.

“If the Lottery people turn the (LVL) machines on beginning at 10 a.m., then yes, we’ll be open earlier, but I’ve not heard anything from anyone about it just yet,” he said. “As long as that changes, then I would open as early as we are allowed because I think Wheeling folks love to go out for Sunday breakfast.

“At The Lube,” Hyde continued, “I can’t tell you how many people were really confused over the fact that we were not allowed to serve them a beer or a mixed drink until 1 p.m. A few guys would just look at me and say, ‘But that’s when the game starts.’ I did my best to explain it, but I still think those people from outside West Virginia had a real hard time understanding it because they didn’t have those laws in their home state.”

The economic benefits to bars and restaurants, Hyde added, will be felt countywide.

“A lot of places pay for that Sunday package for the NFL, for baseball, and for MMA fights, and being able to open and sell alcohol earlier than 1 p.m. would really offset the costs for those because they’re pretty expensive,” he explained. “It’s time to change it anyway because those kind of laws were put on the books a lot of years ago, and they were based on then and not now.” 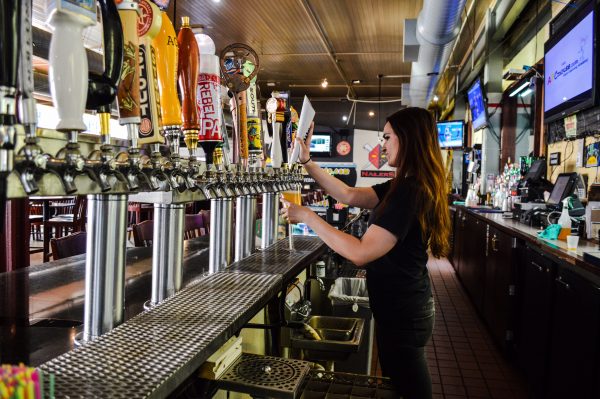 River City Restaurant in downtown Wheeling does not currently open on Sundays, but co-owner Jason Miller said that could change if the “Brunch Bill” is met with approval by Ohio County voters.

The “Brunch Bill” included only establishments that serve alcoholic beverages but did not include retail outlets. Storch inquired about such an amendment after she was contacted by officials of grocery stores within the Third District, but the suggestions gained little ground.

“I thought it made sense to include the retail stores that already start selling at 1 p.m., but it didn’t seem as if there was too much interest in it,” she explained. “I truthfully hoped it would have been expanded so a husband and wife could have stopped at the store to get what they wanted before the big game instead of one of them having to miss the kickoff.

“I know some will suggest planning better, and that’s fine, but that doesn’t always happen and that’s why I thought both should have been included in the bill,” Storch added. “It’s a good thing that we got it this far at this point, and hopefully we can continue to expand it in the future.”

“I feel the legislation could have been more expansive by allowing for earlier sales at retail locations and wineries,” said Del. Shawn Fluharty (D-3rd). “But that’s not the direction the majority wanted to take, so we have what we have now, and perhaps it will be able to grow in the future.” 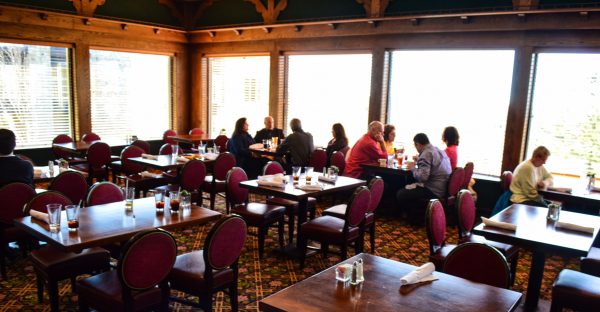 Szalay, owner of the 19th Hole, closely followed the legislation’s progression in Charleston and since its passage has started to develop a new menu.

“That’s sounds like steak and eggs to me,” she said. “I’m very happy that we are going to move forward in the state after a couple of years of just a lot talk about this change. I consider this a game changer for us and it’s going to be wonderful to be able to open earlier.”

But will it pass in Ohio County?

“I definitely believe it will pass here because we’re big on sports in this town,” Szalay said. “That’s why we’re talking about the new menu here already because it just seems like a no-brainer to me and everyone else I talk to about it. I believe it will pass by a wide margin and that will be a very good thing for all the places in this kind of business.”

“It includes a county referendum that I believe will pass in Ohio County because, as a bordering county and tourist attraction, Ohio County is in constant competition with Pennsylvania and Ohio, which have passed similar legislation years ago,” the lawmaker said. “As a state, must do all that we can to allow businesses and tourist attractions to operate in a competitive manner and not restrain their ability in the marketplace.

“This long overdue legislation will loosen restrictions and allow for much needed revenue in our state,” Fluharty explained. “Early projections show $20 – $30 million in annual revenue for the state. Since the legislation includes a county referendum, voters in participating counties to have a voice on this issue. It is always best for voters to have the final say on what impacts their community.”

While Fluharty and Storch believe the referendum will pass in Ohio County, Storch gained the impression during the regular session that voters in Pocahontas County will deny the owners of Snowshoe Resort although more tax dollars are guaranteed.

“That’s what I have heard from a lot of people from that area, but in Ohio County I don’t think it will be much of a problem to get it passed,” Storch said. “But in Pocahontas County, from what I was told, it doesn’t seem to matter that it could lead to something like $500,000 in additional sales at Snowshoe.

“But I think we are smart enough in this area to realize the benefits from the take-aways,” she continued. “I think we see it pretty simply. If we don’t want a beer at 10:30 a.m., then we won’t buy one. If you think about it, it is that simple, but apparently some people in other parts of our state don’t exactly see it that way.”