Over the last several weekends, I have been lucky enough to do a bit of hiking. Urban hiking, even- in Pittsburgh’s Frick Park and New York’s Central Park. Those are both amazing, tranquil escapes with bustling cities all around. And as a bonus, they have some pretty serious terrain. But isn’t it odd that while in Manhattan, where there are millions of things to do, this West Virginian jumps at the chance to hike in the woods? Something’s not quite right here.

I do hike near home. Oglebay has always been my go-to hiking site, and it took me years to fully explore its 1700 acres. But now I’ve done it all for the most part, though I must admit to never having set foot onto the Speidel golf courses. For this I blame a lack of golf skills, and the fees.

I like Dysart Woods a lot. The trails there probably the most rustic around, and the huge trees are a real treat. But there are only two trails and I fear that after a few more visits it may cease to provide the wonder that I seek. 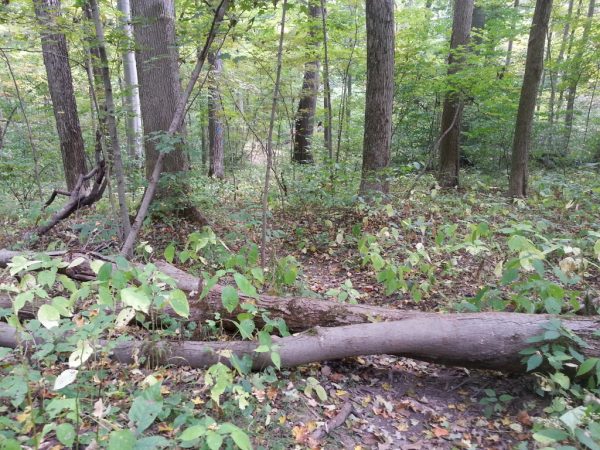 A trail at Dysart Woods. Fallen trees and other challenges are pretty common.

The Ohio Valley has some great rail trails, and I’ve tried many of them. They have their interesting moments, especially the bridges and tunnels (have you been through St. Clairville’s tunnel?).

The trails at Grand Vue Park offer a nice combination of walkability and seclusion. The mowed grass surface is especially appealing. 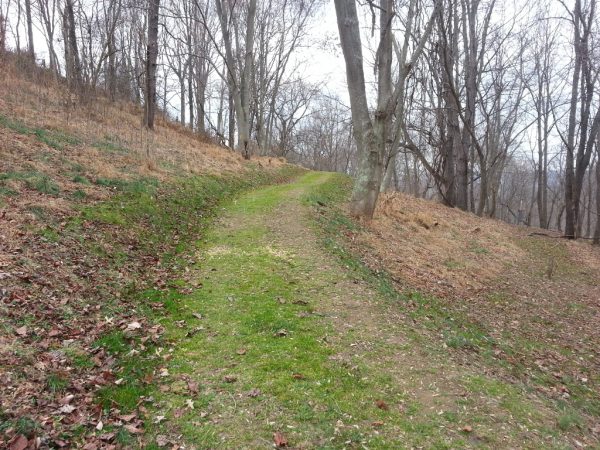 So I can’t complain too much, we are lucky to have quite a few nearby opportunities to go for a walk outdoors. But clearly I want more if I go to big cities and hike in their woods. And there are some local trails that I haven’t tried yet. While searching for some, I came across an interactive map that attempts to show every trail in West Virginia. It’s really amazing, and would be even more so if the Northern Panhandle had more trails. It did show me one that I can’t believe I didn’t know about- the Warrior Trail. This traces an old Native American trail from the Monongahela to the Ohio River, and amazingly does it by following ridges and never crossing a single creek. That’s my next hike, for sure. Maybe someday I’ll even combine it with the Catawba Trail and walk all the way to Morgantown. But that’s more than a hike, it’s a backpacking trip.

There are several Wildlife Management Areas in the Panhandle with trails, and in the map they all say

Trails in Wildlife Management Areas (WMA) are maintained by the WV Div. of Natural Resources. Primarily designated for hunting and fishing access, WMA trails typically are neither named nor permanent.

which doesn’t sound very inviting, but I’ll give them a try.

So I’ve got some hikes cut out for me, and I’m sure there are some nearby hikes in Ohio and Pennsylvania that I don’t know about yet. But that won’t stop me from already wishing for more. For starters, I’d love to see this expansion of the Wheeling trail system implemented. Adding three more tunnels and a bunch of other interesting stuff to the official trails would be incredible, and I could see the whole hillside between Wetzel’s Cave and Suicide Hill becoming Wheeling’s own urban park. I’d also like to see some more trails that can be used to travel from one place to another. Connecting Wheeling Park with Oglebay would be good. Connecting Grand Vue with Oglebay would be great. Or all the way up to Tomlinson Run State Park. Which reminds me, there are something like 31 state parks in West Virginia, but only one in the Northern Panhandle. Maybe we could get another one, with plenty of hiking trails? While I’m dreaming here, how about an underground trail network? Wheeling is criss-crossed with old coal mines, right? What if some of them could be used to, say, walk from Woodsdale to Elm Grove on a cold winter’s day? I doubt there are maps of the mines, and I’ve never met anyone who’s done any exploration of them. But maybe someday.

Photos by the author.