The leadership of Oglebay Park and the Wheeling Park Commission decided to DO SOMETHING this year about the state of golf in the Ohio Valley – namely, that golf numbers are down, and young local people aren’t necessarily passionate about the sport. In an effort to address this challenge and to further engage with the community, they focused their attention on bringing Wheeling-area kids onto the links. Specifically, offering free play for kids with a paying adult at Wheeling Park, Crispin and the Speidel courses after 3pm. They also continued to hold their Junior Golf program, participants of which played the Par-3 for free, received a 50% discount at the Driving Range, and a discount on Crispin.  This increased accessibility (plus having an older brother with a cell phone to call Mom when it was time to be picked up) contributed to a life changing summer for at least one young boy from Wheeling, William Koegler, who will never lose the magical memories of a “summer of golf”.

An Interview with William Koegler, Age 10

So Will, why do you love golf so much?

Because it’s fun, and you take time off on a nice day for the heck of it. It’s fun because every time you can get better and better. One day my grandfather gave me golf clubs, when I was four years old. I had played mini-golf when I was a baby at Oglebay Park and Cape May, NJ. Cape May has the best mini-golf, because there’s this one hole where you can hit it in the water and it almost goes in the hole. It’s #17. It’s the best hole. My first memory of golf is  of hitting some balls at the Par 3 Driving Range, at Oglebay Park. I think I was three years old, and I was with my Dad and my brother, Campbell.

Tell me about this summer. Sounds like you played a lot of golf!

The summer is the best time to play golf because it’s the nicest days. And you get more time in the day because you don’t have school. One day, there was this tournament at Crispin Golf Course (the Elks), and it was my first time ever playing Crispin and my first time playing golf in a while (and my second time ever playing 18 holes). I came in 4th place and I shot a 100 (I admit, that’s because there was a score cut-off).  I parred two holes: #10 and #16. #10 is an uphill Par 3. Hard one. I felt good – I thought I’d get in 3rd place, but this guy beat me and Campbell. I knew I wanted to play Crispin again because it was beautiful. Before that, my grandfather would take us to Wheeling Park to play the 9 holes there, and then we’d play at the pool for two hours. My parents had to work and they also had to watch my baby sister, so I went with my brother. 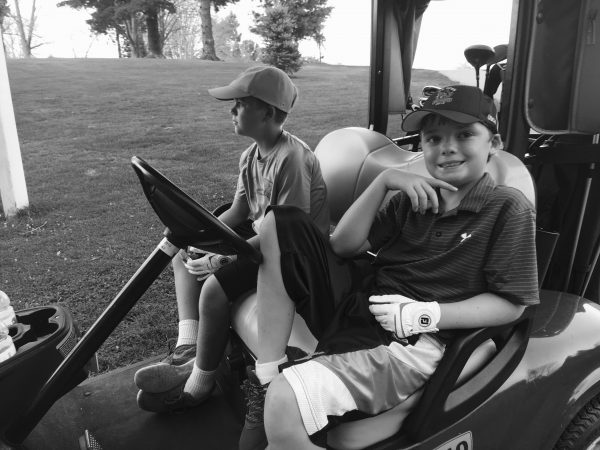 Campbell and Will Koegler on #17 at Crispin.

So after that day, we played around four times a week- an average of four times a week. Sometimes we played two times at Wheeling Park a week, sometimes two times at Crispin a week. Oh, and sometimes Crispin all week or WP all week. When I played with my brother, we’d walk the courses. If we played 18 it would take four hours. At the end of the round, I always feel proud. One day we were walking the course and there was this random man two holes ahead of us, and he said we were awesome because we were walking, just like the pros. And one day, we were playing 18 at Crispin, but after 9 holes we had lost all of our balls (mostly on #5 because I sometimes – a lot – lose my balls in the water.) So we went into the gift shop and tried to buy a pack of Callaway balls, but the woman in line behind us said she wanted to pay for the balls. I don’t think people were used to seeing kids playing during the day!

Tell me about your favorite golf hole.

Near the end of the summer, my grandpa would take me, Campbell and my cousins to the driving range to practice and get warmed up, and to play the Par 3 because it’s the easiest course in Oglebay. I use a sand wedge every hole.

Did you get better, playing so much golf?

Yes. I started out pretty good, I hit my drive well, that was my first good period of getting better. And then near the middle of the summer for about a week, I bent my club left and hit my drive only a couple of yards and I got mad. But one day I fixed it – I was holding my club, tilting it right for a couple of seconds before my shot, and I ended up hitting a good shot. I also got better at putting. I don’t know how I got better … one day I just drained a putt.

I heard you sometimes lose your temper on the course. What’s that all about?

Well, if I hit a bad shot, my brother will yell at me and say, “Nope, play the ball where it was!”, and I get irritated at that, and I usually hit my club on the ground – that’s my classic. I’ve tried to get better at that by hitting better shots. When I can’t hit a better shot, I usually take a re-do (aka mulligan), or get over it. When we’re with my dad he makes me sit out a hole if I lose my temper. That is so irritating. 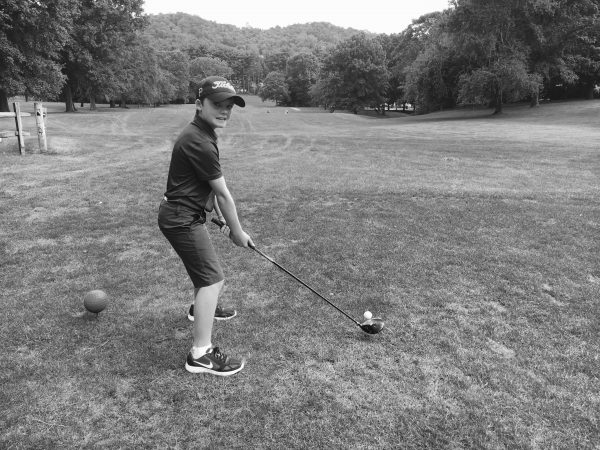 Will tees off on #3 at Wheeling Park.

Tell me about your best round this summer.

My best round ever, I shot a 102 at Crispin. I was with my brother, 18 holes, and I parred one hole (my favorite – #16). I think I birdied #8.  There is another awesome thing that happened. My great-grandpa, Shorty Kull, died 17 years ago. He was one of the best golfers ever. One night, me and Campbell’s friends and my Dad were playing golf, and we were at the longest hole (but the easiest hole for me because I play from the senior tees)- hole #8, par 5 – I was having a bad round and my dad suspended me from hole #7 because I was not behaving well because I was mad about how I was playing. Anyway, so I was at #8 and my second shot, from 200 yards out, I hit the ball with my hybrid, it was really good, then it went down the hill toward the green, and I couldn’t see it. I thought it would be way short of the green. When we walked down there were two balls that I could see, and one was my dad’s and one was mine. When I walked on the green, the one that actually made it was mine! I was putting for eagle, but I ended up getting a birdie. It was magic! I think my great-grandpa Shorty gave me a bounce onto the green, because I was having a bad round. He played Crispin a lot when he was alive, and his ashes were spread on that same hole. (Well, just some of the ashes – my dad accidentally threw rest of his ashes and the whole cup into the lake on #8).

Do a lot of your friends play golf?

Not really. For my birthday party at the end of the summer, I decided to have a putt-putt tournament with all of my friends at Oglebay. I knew that most of them had never played golf, so I thought they would like to learn. We had a leader board, and we even made trophies! I didn’t win, my friend did, (Brennan came in first, and Ryder and Nate tied for second so we had a one-hole play-off for second and third) but we had a lot of fun. 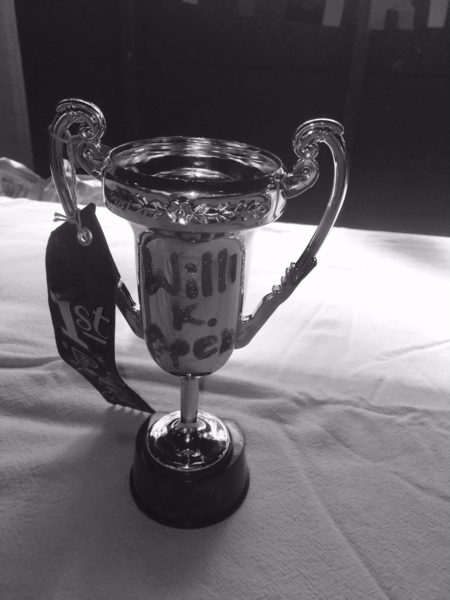 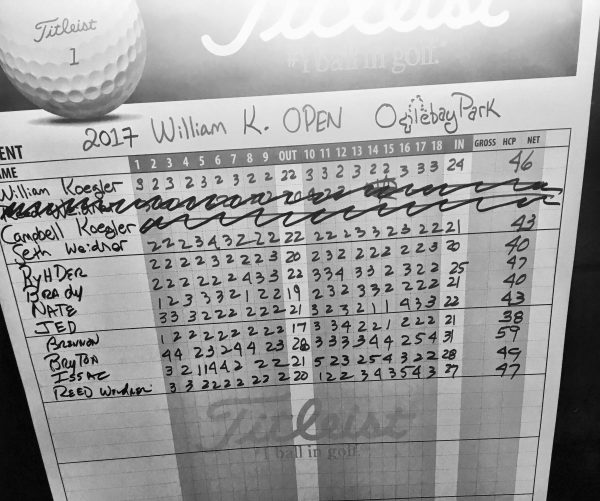 I think more kids should play golf, because it’s an awesome sport. They would get outside and play less video games, and they get to be out in the woods and stuff. Also, you learn about estimating yardages (like, I learned that on Par 3s on Crispin they only show a 100 yard marker, and on Par 4 it’s 100 or 150) so, I would have to use those markers to figure out how many yards so that I can choose my club. I can’t wait until next summer. I want to play harder courses, like Jones or Palmer. I want to play Palmer with my dad, my grandpa and my brother. Actually, yeah, that’s all I want to do! 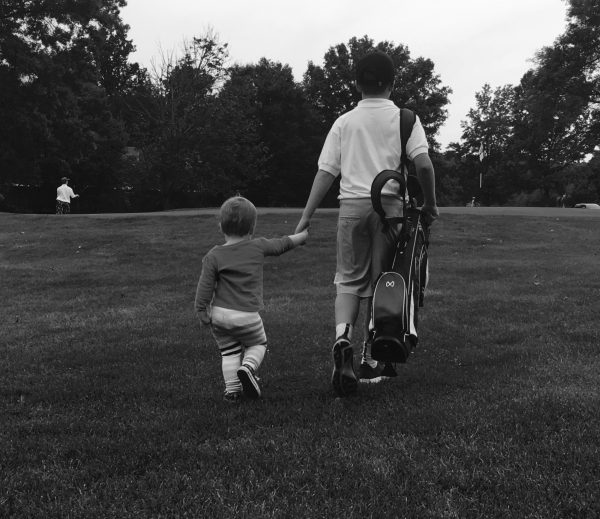