Then this person knew that person, and that person knew someone else, and the Neue business (pronounced, “new business”) was born in downtown Wheeling.

Here’s the funny part of the story – Matt Myles and Caleb Filburn, the co-founders of the marketing firm, didn’t even know each other when their partnership officially began. The two young men were in a graphics design class at West Liberty University, and an assignment called or the creation of a company, logos and all.

The pair’s developed concept was the hit of the class presentations, and Hogan witnessed it. That’s why Filburn and Myles are now doing business in the Professional Building in downtown Wheeling.

The marketing/branding firm offers a plethora of services, including web design and maintenance.

“Once we realized we could do paid jobs and succeed, we figured, ‘Why not?’ We decided then to see how far we could expand it,” Filburn said. “So that’s what we did.

“Susan Hogan came up to us afterward and she said, ‘Hey I know a guy that has some office space whom you might want to talk to,’” he recalled. “So we set up a time to see Patrick Cassidy and his wife. That’s how we met him for the first time.”

Cassidy owns the First Capital Building on Eoff Street in downtown Wheeling, and he offered the business partners space as an incubator project.

“That’s how we got it off the ground. That was our launch pad,” Filburn said. “For a couple of months after we had graduated, we were working from home while we were figuring out how we were going to proceed.

“We then decided that working out of our homes was too difficult for what we were trying to accomplish,” he said. “We needed to collaborate, so we moved in and got started.”

Eight months and many paid-clients later, the White-Elliott connection led to a 0.4-mile move to the historic Professional Building. At the time, the building owner had two side-by-side office spaces available, and Myles and Filburn committed to both. And then they knocked down the dividing wall.

“After we learned about the rates and the space and what was possible, we decided to go for it to see what could happen,” Filburn said. “Once we took the wall down, we had a very functional space, and now it’s going on a year, and we’re doing well.”

The move to Neue’s current Market Street location has attracted not only new clients but also personal involvement in “THE” conversation about the future of the once-thriving business district. The Professional Building, in fact, once housed the City Bank of Wheeling.

“This is where we wanted to be,” Filburn said. “One, we get our B&O taxes waved for the first few years, and then it will be discounted by 50 percent after that thanks to the city of Wheeling.

“But the biggest advantages to being here in down Wheeling are the proximity to lots of stuff and also the network that we have been able to form here,” he said. “There are organizations like ReInvent Wheeling, and that’s allowed us to meet a lot of people who are rooting for us, and occasionally we’ve gained some business just because of where we are located.” 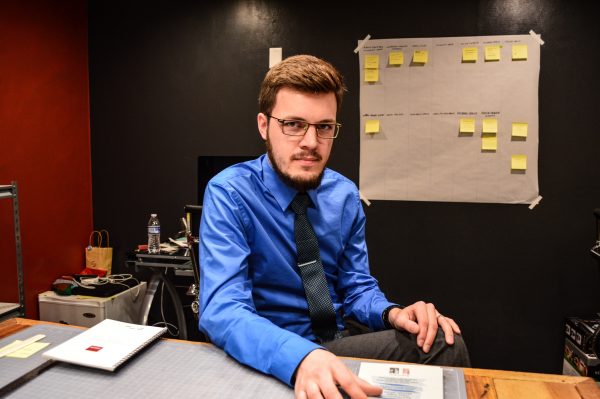 Caleb Filburn is pleased with Neue’s downtown Wheeling location because of the close interaction the business partners’ experience with many other businesses and organizations. (Photo by Steve Novotney)

Filburn, a 2009 graduate of St. Clairsville High School, admits he was unaware of today’s downtown Wheeling and what opportunities the district present.

“For me, as a person who grew up in St. Clairsville, Wheeling was a foreign country until we set up shop here, and I learned very quickly that Wheeling and the downtown are not all of the horrible things that some people in St. Clairsville say it they are,” Filburn added. “After being here five or six days a week for the last several months, I’ve come to realize that Wheeling is actually a pretty freakin’ cool place and being a part of everything that is going on is also a very cool thing.”

Those are some of the services offered by Neue (www.neueideas.com), and the Wheeling National Heritage Area Corp., Lynn Buch Interiors, the Wheeling Convention and Visitors Bureau, and Gold Kourey and Turak are now among the current clients under contract. It’s about image. Visual, yes, but also what is in the consumer’s mind thanks to slogans and logos and jingles.

“When we first started, we were working with a lot of companies with logos and recovering their brands after a lot of years of staying the same. We’ve done fliers and posters and corporate report designs – a little bit of everything,” Filburn said. “Now recently we have accepted a lot more web-design clients, and that’s because that’s one part of doing business we have decided to specialize in.

“We have also started working with Redbeard Communications and Nathan Blake,” he reported. “Nathan does a lot of really neat things that tie into a lot of what we do, so that’s another exciting thing we’re working on right now.”

Their duties depend on the accounts; their office hours fluctuate; their schedules are often different; and ideas are not limited to those traditional 9-to-5 business hours. Filburn and Myles often work from home, they communicate next-day agendas each evening, and there’s even an oversized “To Do” list on the office wall.

“In the end, we always consult in each other because we’re in this thing together, but we have found that we can make much more progress if we are splitting duties up like we are now.

“There are days when we are here at 7:30 in the morning or 7:30 in the evening, and sometimes we’re here at those times during the same day,” Filburn said. “We have discussed trying to normalize our work hours, but right now that’s not much of a priority. Not right now. Getting a quality product to our clients is far more important.”

It all started with a “Hi” in a college classroom after Filburn and Myles were assigned as partners in Dr. White’s class. The two were in a few other classes together, but Filburn was a commuter and experienced very little on-campus social time, and Myles is a 2009 grad of Wheeling Park High School.

“We weren’t friends at all. Not at all, and that’s because I drove up and down that hill several hundred times during those years,” Filburn said. “The only time I went to the student union was to grab a bite to eat. But once I was done, I was off the hill.

“But it was in that one class when we came up with the company. It was called ‘Neue’ then too. There are things that are different today from when we first started, but the basic foundation started then, and those philosophies are the still the same. It was entirely random that we came to work together. We really never even spoke to each other before that one project in that one class.”

By the way, Weelunk thanks NEUE for the design of our logo: 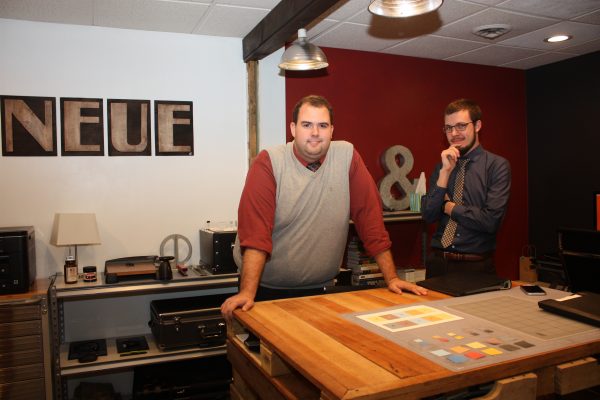 Matt Myles and Caleb Filburn did not know each other when their partnership began at West Liberty University. Their office is now located in the Professional Building in downtown Wheeling. (Photo by Maureen Zambito)