The University launched the Fr. Clifford Lewis S.J. Scholars Program, which offers an affordable, lower cost tuition to commuter students from 12 counties in three states. Starting this fall, commuters who qualify can attend Wheeling Jesuit for $8,250 per year. 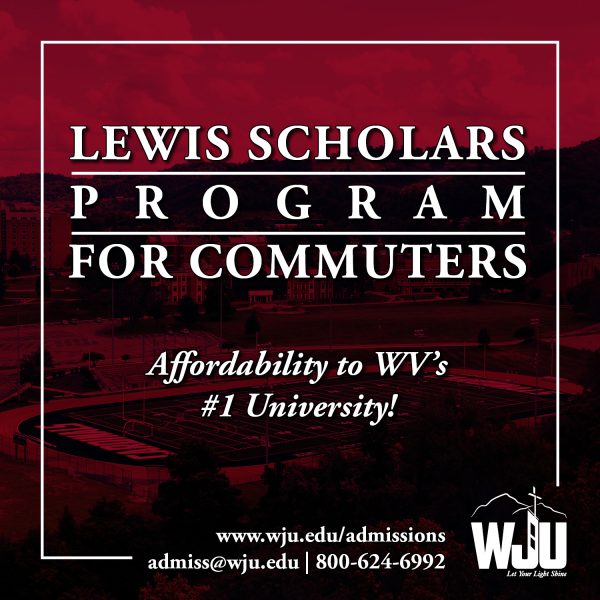 “The Lewis Scholars Program is another intentional way that our university is providing access to West Virginia’s top-rated university to local students,” said Wheeling Jesuit President Dr. Debra Townsley. “Thanks to our new commuter rate, aspiring students in this region have an opportunity to make their college selection based on academic excellence, rather than cost.”

“Since our founding in 1954, WJU has been a place focused on educating students in Appalachia for life, leadership and service. The Lewis Scholars Program takes cost and affordability out of the college decision process, allowing students to base their choice on the best academic environment available to help them achieve their educational goals,” Doyle added.

With more than 90 percent of Wheeling Jesuit graduates working in their field or attending graduate school within 12 months of graduation, Doyle said, “local students have even better access to an educational experience that will position them for success after graduation.”

The program is named for Fr. Clifford Lewis, S.J., the first Jesuit who came to Wheeling in the early 1950s. He spent more than half his life serving and working in Wheeling – a region he grew to love and call his home. The program will continue his legacy to help educate the next generation of students for life, leadership and service.

“Wheeling Jesuit students have given back to the region through community service, immersion trips and other outreach programs. Serving and educating the people of Appalachia was what Fr. Lewis and the founding Jesuits envisioned when starting the university and we remain committed to this mission today,” Doyle said.

The new commuter rate will apply to qualifying students from Brooke, Hancock, Marshall, Ohio and Wetzel counties in West Virginia; Belmont, Guernsey, Harrison, Jefferson and Monroe counties in Ohio; and Washington and Greene counties in Pennsylvania.

Doyle said students who qualify for federal and state financial aid could find their out-of-pocket costs to attend Wheeling Jesuit lower than other private and public colleges in the region.

The program, he explained, was developed to parallel Wheeling Jesuit’s mission to educate students for life, leadership and service.

“Lewis Scholars will be engaged in all three of these areas once they arrive on campus. We know that students exposed to service opportunities tend to give back to their communities upon graduation, and as a result of this program, the Ohio Valley region will be positively impacted through the work our students will undertake,” Doyle said.

Students who qualify for the program must participate in seven hours of service a semester through Wheeling Jesuit’s Service for Social Action Center. In addition, students must take 12 to 16 credit hours per semester and maintain good academic standing.

“The Lewis Scholars Program has been created keeping our regional students in mind and continues the tradition at WJU of being the most affordable Jesuit education in the United States,” said Doyle. “In a time when tuition costs are rising and college enrollment is declining, we have found a way to keep costs for our regional commuters reasonably priced.”