Music lovers in Wheeling can rejoice — a new musical experience is here.

At the heart of downtown, at 40 12th Street in the McLain Building, Nail City Record is bringing back the art of album collecting. With six full rooms planned, owner Jon Napier and his partner Molly have amassed a collection of more than 100,000 albums, 12-inch singles, 45s, cassettes and CDs, which they offer for sale to music fans. The store now features the Landwehr Listening Lounge and two other browsing rooms, with three more rooms to be open once the remodel is complete, Napier said.

From a box to a room to a building …

It all started with a box full of records in a West Liberty bedroom in 2016. The box soon became a room, which then became a building full of music and eventually a store in Elm Grove. Napier said the company sells records online and has shipped albums to customers in every continent except Antarctica … for now. 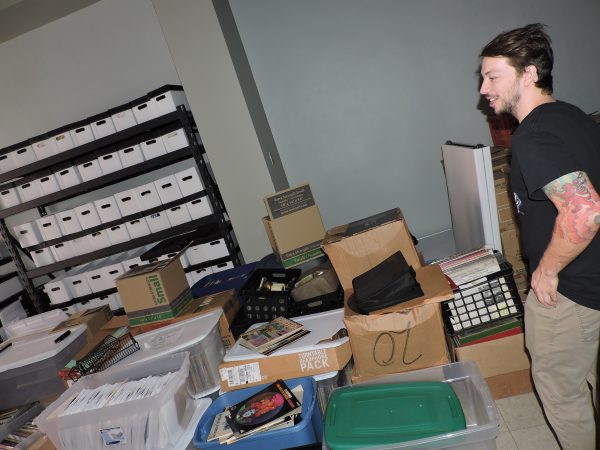 Jon Napier looks over only a small portion of the vast inventory at Nail City Record.

“I found myself going to as many record stores and live music venues as possible between Wheeling and the Rocky Mountains,” Napier said. “I’ve even made it to the record stores in San Francisco and the Bay Area. Doing this inspired me to bring it all back home.”

While Napier enjoyed his time in Elm Grove, he said his goal was always to open a record store in downtown Wheeling.

Wheeling’s musical heritage spans the generations, with Johnny Cash, Jamboree U.S.A., Brad Paisley, Rob Parissi and many more musical milestones being reached here. With Nail City Record’s opening, Napier said that the city also will be one of the only bastions for record collecting between Pittsburgh and Cleveland.

Some people argue that vinyl is a superior listening experience, and it’s something to collect, Napier said.

“Collecting is its own culture,” Napier said. “Collectors are always traveling to new cities to find new stores. The music you collect is an extension of your personality. Record collecting never really died; it just became less popular. I think people are just now rediscovering it, that is why it’s coming back. The collecting itself is only half the experience. Going to the record store and getting lost in the music, that’s a pastime held sacred by people all over the world. You meet like-minded people, and the music can be enjoyed by every generation.”

To ensure his albums last, Napier also carefully preserves them using standardized protective techniques that involve wrapping the records themselves in paper and encasing the slipcovers in plastic. After all, the vintage album covers are often held as precious artifacts in their own regard. 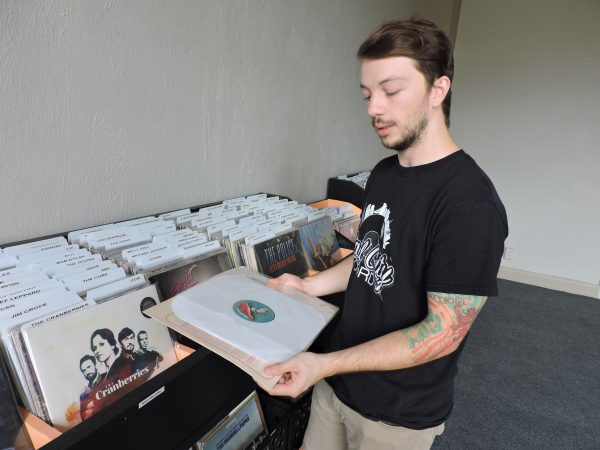 Jon Napier demonstrates some of the standardized preservation techniques used at Nail City Record to preserve their used and vintage albums.

The legend of Jim Landwehr

One of the most important developments in the saga of Nail City Record was their meeting with Jim Landwehr, an Elm Grove native with 50 years of record collecting to his name who always dreamed of opening his own record store in Wheeling. According to Napier, about three-quarters of their massive inventory came from Landwehr.

“We have one of the biggest collections of used and vintage albums, and collectors come from all over the country,” Napier said. “We’re really putting Wheeling on the map, preserving the history of music and reaching people who care.”

And vinyl is not just for collecting.

“People still definitely are buying records to listen to them. We carry both used and new vinyl. We make sure to have the newest albums in stock on their release day. We also take pre-orders for upcoming releases and reissues on our website nailcityrecord.com. We even have listening parties for new albums a week or two before their release to the public,” Napier said.

Community building in the Friendly City

To incorporate the local community even further, Napier said that Nail City Record will be offering books about local history and culture, also collaborating with local artists to offer their work.

“I believe in Wheeling and downtown fits the profile of where businesses like mine often thrive,” Napier said. “I see a lot of positive changes already happening around town, and I want to be a part of them.” 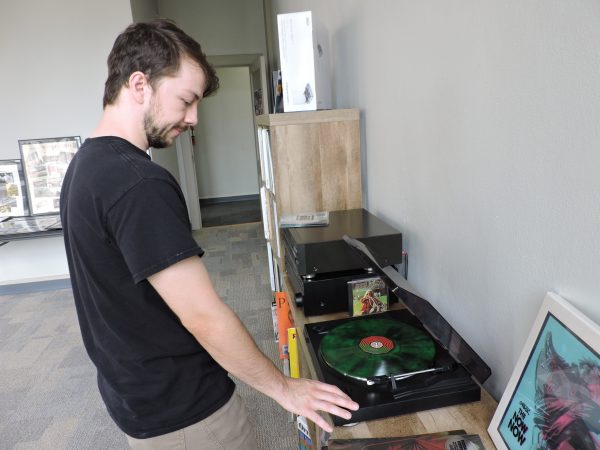 Jon Napier gets the music going in the Landwehr Listening Lounge at Nail City Record.