It is a partnership that they have discussed on several occasions through the years, and residents of the city of Wheeling will be the first to experience the trio of Todd Burge, Grammy winner Mollie O’Brien, and her husband, Rich Moore, Friday evening at the Blue Church.

“We have played together before, but we have talked about this trio for a long time, and all of us are pleased that we are making it a reality,” said Burge, a resident of Parkersburg. “We’ll be merging our folk forces for a total of nine shows together, and we’re very excited that it will all begin at the Blue Church in East Wheeling.

“We have heard a lot about the folks in Wheeling who are trying to renovate the Blue Church into a space for arts and music,” he said. “What has been happening in Wheeling is inspiring, and we are very excited to be a part of it this Friday evening.” 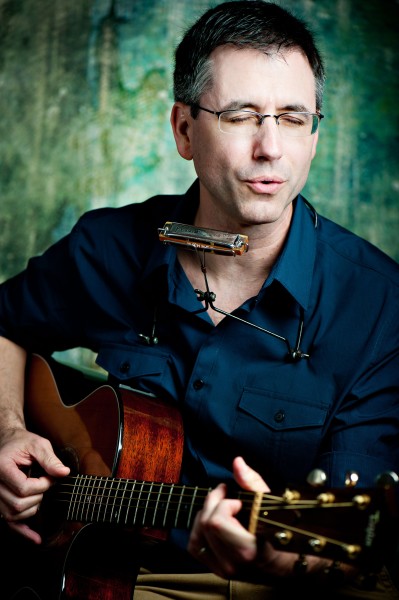 Todd Burge got his start in the Morgantown area.

The performance is set for Sept. 11 and is scheduled to begin at 8 p.m. Tickets are $20 at the door and $18 in advance, and they are available at www.tiny.cc/mollie. Tickets also can be purchased by using this link: http://www.eventbrite.com/e/an-evening-with-mollie-obrien-rich-moore-and-todd-burge-tickets-17699048330.

According to Jeremy Morris, executive director of the Wheeling National Heritage Area Corp., the Blue Church is one of Wheeling’s best examples of Greek Revival architecture and one of a handful of pre-Civil War buildings remaining in downtown. Morris said his organization continues to overcome obstacles to revitalizing the former church building into a concert and performance venue.

The trio performance is yet another step in the right direction.

“We are so happy that we can bring Mollie back home again,” he said. “This show will be unlike any of her recent Wheeling shows. Just her with family and friends, doing what they do best, telling stories with guitars in hand.”

O’Brien became known to the rest of the world as a singer’s singer when, in 1988, she and her brother Tim released the first of three critically acclaimed albums for Sugar Hill Records (Take Me Back, Remember Me, and Away Out On The Mountain). She’s long been known as a singer who doesn’t recognize a lot of musical boundaries, and audiences love her fluid ability to make herself at home in any genre while never sacrificing the essence of the song she tackles. 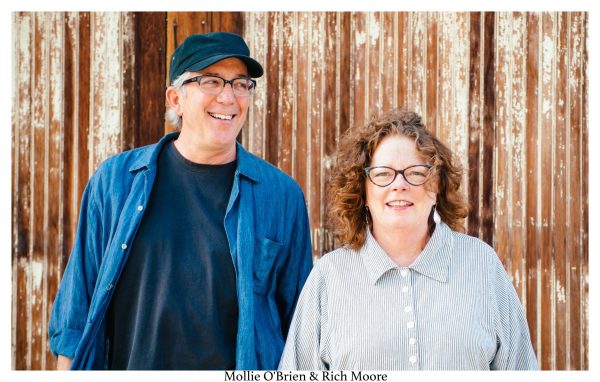 Moore has busied himself in the Colorado music scene for many years. While staying home with the kids when Mollie and Tim toured, he held a day job and continued to perform locally with a variety of Colorado favorites, including Pete Wernick and Celeste Krenz. Moore is a powerhouse guitar player who can keep up with O’Brien’s twists and turns from blues to traditional folk to jazz to rock and roll.

Burge has played everything from Alternative Rock to Contemporary Folk, performing concerts at festivals and in venues as diverse as CBGB’s, The Country Music Hall of Fame, The Kennedy Center, and of course, literally hundreds of clubs including the obscure, to the world famous Caffe Lena, Club Passim, and Music City Roots.

“These days most people think my roots are in folk music, but I actually started in the Morgantown area playing mostly punk rock,” Burge said. “But through the years my music has evolved in towns like San Francisco, Pittsburgh, and Austin. These days I play contemporary, acoustic music that tells stories. I like to see myself as a painter when I am on stage creating something for everyone to see and hear.

“I always tell people that during my 20s I worked hard trying to get out of West Virginia, but then during my 30s I worked to get back to West Virginia,” he continued. “What I have learned is that I can make up my songs anywhere, but that West Virginia is where I like to perform them the most.”

Burge performed a “Third Friday” show at Artworks Around Town nine months ago, and he said his impression far exceeded his expectations.

“I really thought there might be 10 or 15 people there, but the place was packed for the whole show,” he said. “I have performed all over the state but not very often in Wheeling, but after that experience at Artworks I would love to come to Wheeling much more often.

“When I was there the last time, I got a feel for what is taking place in Wheeling,” Burge continued. “I have heard the acoustics are wonderful inside the Blue Church, and the three of us are going to back each other up for all of our music.” 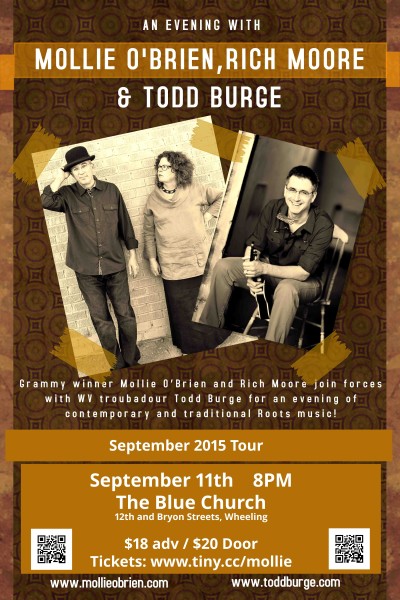 Burge’s music can be found online at: www.toddburge.com. To listen to a collection of his latest music, feel free to visit www.toddburge.bandcamp.com.

Morris said that returning patrons will see noticeable changes to the Blue Church from when the venue first opened in February of 2015, and anyone wishing to volunteer time or donate to renovation of the structure can visit The Facebook page, “The Blue Church – Wheeling, WV” or www.wheelingheritage.org.

“We have a clear vision for the Blue Church, and many folks are getting involved with the work that needs to be performed,” he said. “There are big projects that we will hire contractors to perform, but there are also a lot of smaller projects that we can complete ourselves through volunteers from our community.

“This is not the first concert that we have hosted at the Blue Church, but maybe it will be the first one for some of the people who choose to attend,” he continued. “And then hopefully some of those folks will decide to get involved with what we are doing with the Blue Church so the community can continue to save one of the oldest buildings we have here in Wheeling.”