Earl’s note: This is the first of a short series about things to do with kids. The activities described in the series are inexpensive and fun outdoor things that anyone can do with children. The next story in the series will be about the hide-and-seek game of geocaching. After that, we will take the kids tent camping complete with hobo pies, sleeping bags and no internet. We are calling the series, “Earl’s Capers With Kids.”

You have not lived until you see the look on a small child’s face when he or she lands that first 4- or 5-ounce bluegill. No matter how much stress is in your life, it all disappears when you take a child fishing, especially if you are a grandparent, and that child is your grandchild.

I grew up on a small farm about 20 miles west of Buckeye Lake in Central Ohio. When we were children, our parents sometimes took us to our aunt and uncle’s farm on Coonpath Road near Lancaster, Ohio, where we fished for bluegills in their farm pond using cane poles equipped with hooks and red and white bobbers and baited with worms.

Back in those days, most of the farmers harvested their corn as ear corn and stored it in corncribs. The feed mill in Pickerington, Ohio, had a corn sheller, so the farmers would take their ear corn to the mill to be shelled and ground into feed. The mill needed to dispose of a lot of corn cobs, so our dad had them bring a couple of truckloads to our house and dump them in our barnyard to provide a place to dig fishing worms. Within a couple of years, the area was flush with worms, so we had a steady supply of bluegill bait. 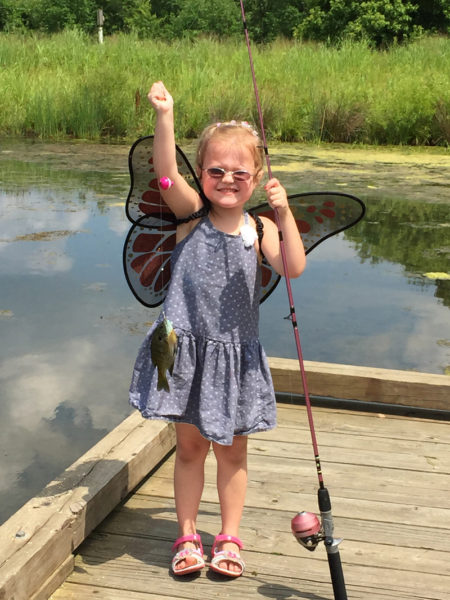 Juliet caught this one all by herself while wearing butterfly wings and shades.

Even though kids today still enjoy digging in the dirt and catching fishing worms, the bluegills bite just as well on some other things that you might already have right in your refrigerator. Today, three of my favorite bluegill baits are hot dogs, lunch meat and ham. The next time you bring home a spiral sliced ham from the store, peel off some of the skin and save it for bait. Cut it into 1/8-inch-wide strips, put small amounts into sandwich bags, then toss them in the freezer. If you have deli ham slices or lunch meat, you can also use small pieces of those, but they don’t stay on the hook as well as the tougher skin. Since the thicker and tougher rind portions stay on the hook better, those make the best baits. If you are using pieces of a hot dog, bait the hook with small pieces that include the skin and then put your hook through that rind so that the bait does not fall off as easily. Use very small pieces of bait. 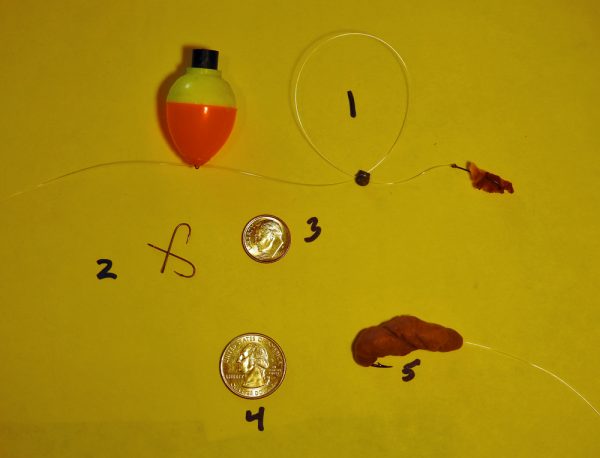 Let’s talk tackle. We use size 10 to 12 barbless hooks when we take our grandkids bluegill fishing. As you can see from the picture, those hooks are quite small. The small-sized hooks match the bluegill’s small-sized mouth. We opt for the barbless hooks for two reasons. First, they are safer when fishing with children. If someone accidentally gets hooked, the tiny barbless hook comes right out, and the fishing goes on. Getting accidentally hooked with a barbed hook sometimes means a trip to the ER to have it removed. The second reason that we use the barbless hooks is because they are easy to remove from the fish without causing an injury so the children can release the fish unharmed. We usually bluegill fish with 4-pound test line. We put a tiny split shot sinker two to three inches above the hook and a small bobber about a foot above the sinker. 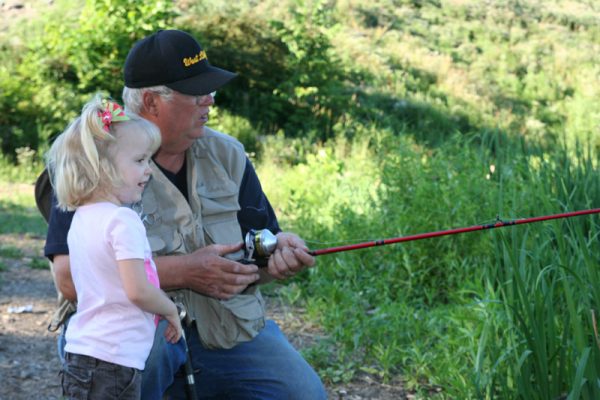 Here I am putting the line out for my granddaughter before handing her the rod. The rod is fitted with a vintage closed faced Zebco 33 reel. By the next year, she was casting it out by herself.

If you are going to take children fishing, skip the cartoon character bubble pack fishing rods made for children and invest in a decent rod and reel for each of them. I have tried to fish with a couple of those kiddie rods and found the reels to be junk. The ones I tried did not cast well. In addition, the rods were too short. If an experienced adult has difficulty fishing with one of those, how will a child who has never fished before be able to do so?

Another good option is a 6-foot rod outfitted with the classic Zebco 33 closed face reel. Those are sold as rod and reel combo kits at most department stores. I usually do not mention brand names, but we have some Zebco 33 rod and reel outfits that are over 30 years old. My wife usually uses one of the Zebco 11 mini rod outfits when we go crappie fishing. Those reels come filled with 4-pound test line, which is perfect for bluegills and crappies. The small size of those outfits makes them perfect for very young children. If your grandchildren are elementary school age or older, you might want to get them started with an open face spinning outfit. Those take slightly more skill to master, but school-aged kids do so very quickly and are soon bragging about their casting abilities even though the fish are usually quite close to the shore.

Before you head to the waters with the kids, scout out potential fishing locations by yourself to find a suitable spot. You need a location that will produce fish while being kid friendly. When it comes to the kid-friendly part, the first consideration is safety. Fortunately, bluegills like shallow water especially when they spawn, so look for a place that has accessible fish, but does not pose a danger to the children if someone falls into the water. If the water is deeper, then each child needs to wear a Coast Guard-approved personal flotation device. I always cringe a little when I see folks with very young children playing or fishing from the boat dock near the launching ramp in Wellsburg because the river water right off of that dock is 10 or 12 feet deep. If kids are just learning to cast, you will also want a location that is not too close to the trees. Castleman Run and Bear Rock lakes both have great bluegill fishing locations for kids. 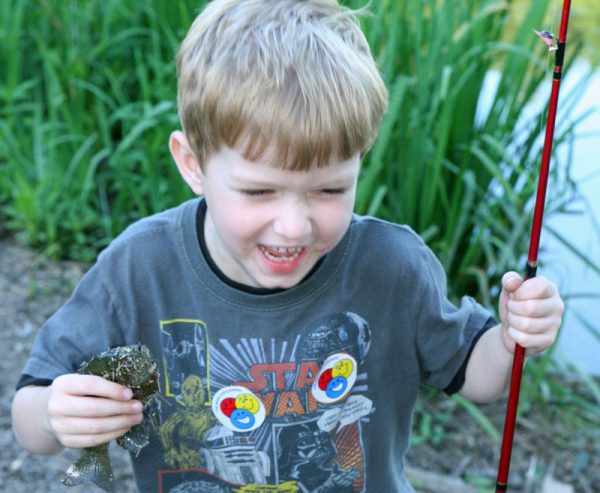 Half of the fun is putting the bluegill back into the water.

Slightly older kids enjoy going after the larger fish, so take them catfish or carp fishing. At Castleman Run, the carp often come into the bluegill spawning areas to feed on the eggs. When that happens, I take one of my smaller river rods to the lake, bait it with a dough ball and toss it out near where the carp are feeding.  (Click here for Earl’s top secret dough ball recipe.)

The only terminal tackle is a Kahle style hook baited with a dough ball about the size of a marble. The Castleman Run carp average six to eight pounds in size, so they are fun to catch. When they are actively feeding on bluegill roe, they are also easy to catch.

As I was having fun catching the carp one day last summer, I noticed a young mom not far away helping her little boy fish. The little boy looked to be about 5 or 6 years old, and he was not having much luck, so I asked the mom if she would mind if I allowed her son to land one of the carp. She said yes and that he would love to do so. Shortly after that, my dough ball had some action, and I hooked another carp. I handed the rod to the little boy and coached him as he undertook the fight of his life. The carp would run the drag stripping off some line, and I would tell the boy when he could reel it back.

For several minutes, that give and take was repeated. A little farther down the bank, a trout fisherman noticed what was going on and came to our location almost on the run. He said that he would “grab the line and run back onto the bank with it.” I asked him to please not touch the line. “But he will lose it,” he said. I told him that we would take that chance, but I wanted the boy to land the fish.

Eventually, the carp got tired, and the little boy pulled it ashore. We weighed it using my fishing scale, and it weighed six pounds. As the little boy held the fish, his mom took a ton of pictures with her cellphone. I will never forget the looks on both of their faces. She said that it was the biggest thing he had ever caught by far. That little boy did not care that it was a carp, and he got pretty muddy by the time he turned it loose. I saw them out there a week or so later, but the carp had moved on. The mom once again thanked me profusely for letting her son land that carp. 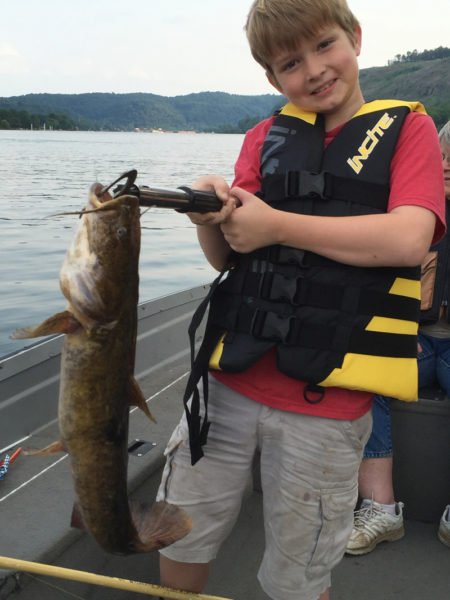 As kids get older, they can catch bigger fish. I couldn’t resist posting this picture of our grandson, Heath, holding his 16-pound Ohio River catfish. Note the properly fitting PFD.

Driving down the road, a man saw an injured snake that had been struck by a car. Very carefully, he picked up the snake and gently placed it into a box. After he took the snake home, he spent the next few weeks nursing it back to health. After the snake had recovered, the man reached into the box to pick it up and the snake bit him. “After all I did for you, why did you bite me?” asked the man. “You knew what I was when you picked me up,” replied the snake.

Remember that children are children and that they are not just small adults. When you take a child fishing, there will be tangles, snags, wayward casts, hooks to bait and fish to unhook. You will need to coach the children and encourage them.

I am reminding you of this because you need to know that you are not going to get a whole lot of fishing done if you are helping a young child fish. As they get older and more experienced, children also become more independent, so you might be able to get a line into the water then.

By the way, I am aware that snakes like to avoid people and do not usually bite people, but that story was too much fun to pass up.

For an experience that you will long cherish, take a small child fishing. If you do not have a young child or grandchild, borrow one or more from a friend. Be sure to take their mom along, too, because someone needs to take the pictures to post on social media. Our daughter, Rachel Scofield, gets credit for the cover picture for this story.

• Earl Nicodemus is retired after 40 years as a professor of Instructional Technology at West Liberty University. He helped to form the West Liberty Historical Society, and he and his family maintained the historic West Liberty Cemetery from 1985 to 2016. In 2016, Earl was named as a West Virginia History Hero. His other interests include gardening and fishing.