West Liberty University’s College of Liberal Arts is celebrating the birth of “Frankenstein” (the novel) throughout 2018, beginning with an interdisciplinary symposium from 10 a.m. to noon, Tuesday, April 3.

Sponsored by a grant from the West Virginia Humanities Council and with matching funding from the WLU Foundation, the symposium is free and open to the public and will take place in the Boyle Conference Center, located in the Academic, Sport and Recreation Complex (ASRC). Written by Mary Shelley, “Frankenstein” continues to attract the attention of the academic world due to its universal themes. 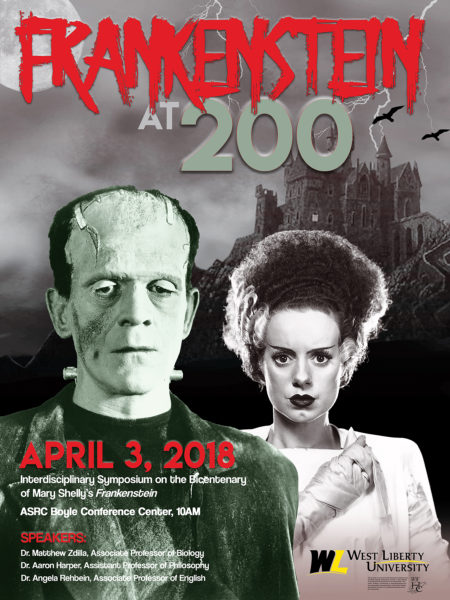 “We’re calling it Frankenstein@200, and the goal of this symposium is to celebrate the bicentenary of the novel, which was originally published on Jan. 1, 1818, and to ponder its continued relevance and importance to scholars in a variety of fields,” said Dr. Angela Rehbein, associate professor of English.

The celebration will continue in fall of 2018 with other events including a film series of the many screen adaptations of the novel.

The symposium will feature three speakers:

Other plans are in the works for a special library exhibit of comic book and graphic novel adaptations of “Frankenstein,” assembled by Dr. A. Waller Hastings, professor of English, who also will lecture on this topic. WLU professors also will take the show on the road with soon-to-be-announced book discussions at local libraries and reading groups.

“The schedule of fall events is still a work in progress but will eventually be listed on the WLU website and released to the news later this year,” Rehbein said.