One Solution To A Difficult Question On Christmas Morning

The Christmas season is upon us again, and that means children all over the planet are busily making out their Christmas wish lists for Santa. Of course, one of the most traumatic times in a youngster’s life is ultimately realizing that the Santa who flies all over the world in a reindeer-driven sleigh and delivers toys to every living child in just one night doesn’t exist.

This horrible moment is almost as shattering for the parents as it is for their children because it marks a right of passage from a time that never can be relived. Naturally children learn the devastating truth about Santa in a number of ways, and not one of them is particularly pleasant. But I recall one Christmas when my young daughter posed a question that took me so much by surprise I was hard-pressed to come up with an answer. And it was not about Santa’s existence. 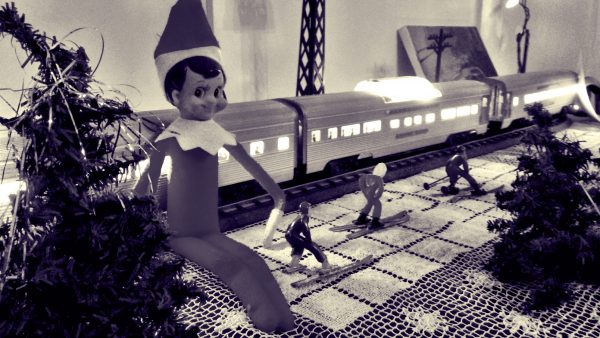 I think my daughter was 4 years old when she decided she would ask Santa to bring her a two-wheel bicycle. And this request sent me searching through the myriad catalogues that were stuffed into our mailbox from before Halloween until after Christmas. To this day, I remember which catalog had The Bike in it, but I won’t mention it here because it really isn’t relevant.

What is important, however, is that I found the absolutely perfect bike for the perfect daughter. I can see it as if it were yesterday. The overall color was a beautiful teal, and a little white basket decorated with colored flowers hung delicately from the handlebars. Colorful streamers dangled from the white handlebar grips, and the chain guard bore the words “Sugar and Spice.” Even the training wheels were shiny and pretty. I ordered it immediately.

When the bike arrived, it was even more adorable than it was pictured in the catalog, and I could barely contain my excitement. What a great Christmas this was going to be! Little did I know what the day was really going to bring.

Christmas morning dawned sunny and unusually balmy, and all I could think about was how it would be a perfect day for my daughter to try out her new bike. Because it was too big to wrap with anything but a huge bow, the bike was the first thing she saw when she came into the family room where the Christmas tree was located. Her eyes lit up, an enormous smile spread across her face, and my heart melted.

She dutifully opened all of her other presents, but she barely took her eyes off that bike. And then the moment finally arrived. I took her outside to give her first two-wheeler a spin. I helped her up onto the seat and made certain that the training wheels were adjusted properly. Then I said, “Go ahead. Pedal it.” And she couldn’t do it. As hard as she tried, she simply could not make the pedals go. Now I was afraid that perhaps her legs just weren’t strong enough for the task at hand. By this time, she was on the verge of tears, and I was an emotional wreck. What to do?

After giving the matter some thought, I decided to take the bike up the street to our neighbors’ house. Two young girls lived there, but they were both older than my daughter, and I had the bright idea of letting them try the bike. Neither of them could make the bike move either. Clearly the perfect bike was defective.

Thankful that my daughter was not suffering from some rare disease that involved weak legs, I returned home with the bike wondering what in the world I would tell my daughter. Finally, I decided that the truth was the best way to go, and so I gently explained that the bicycle was broken.

She looked at me for a moment, and then tears welled up in her big blue eyes. As she opened her mouth to speak, I tried to anticipate what she was going to say. “Can I get a new one?” “What’s wrong with it?” “Can you fix it?” These were some of the questions I thought she might ask, but how wrong I was.

She looked up at me with tears rolling down both cheeks and her lower lip quivering. And then she said, “Daddy, why would Santa bring me a bike that doesn’t work?”

I was stunned. Her faith in Santa’s existence was unshaken, but she couldn’t understand why he had brought her a bike that she couldn’t ride. I cleared my throat and ran through a series of vocalized pauses while I frantically searched my brain for a suitable reply. Finally, I told her that Santa was so busy all year making toys that he needed help, and often he lets his elves build toys too. Sometimes these elves make mistakes because they aren’t as good at building toys as Santa is. I assured her that it wasn’t Santa’s fault, and she seemed to accept this.

I can’t really offer any advice to parents about what to say when they are asked whether or not Santa really exists. But for those whose children want to know why a certain Christmas toy is broken, I say blame it on the elves. It worked for me.