Mom was involved with the Park Players and was a member of the record-setting speech and debate team at Wheeling Park High, and Dad has long been a master musician who now specializes in the bass guitar as a member of one of the most popular bands in the Wheeling area.

Somehow, some way, their two sons have navigated a way to follow both paths.

“I’ll admit that I have zero skills with any musical instrument, so that all comes from their father,” Brigitte Donahie Mazure admitted with a laugh. “I mean, I barely could play the triangle on beat, so that’s all Mike, for sure.

“But Mike has gone about music the same way I’ve gone about speech and theater. Those have been Vance’s and Luke’s choices,” she said. “Of course, we have been there for their questions, but because there are so many choices they have at Wheeling Park, they have had a lot to choose from and that’s been great for both of them.” 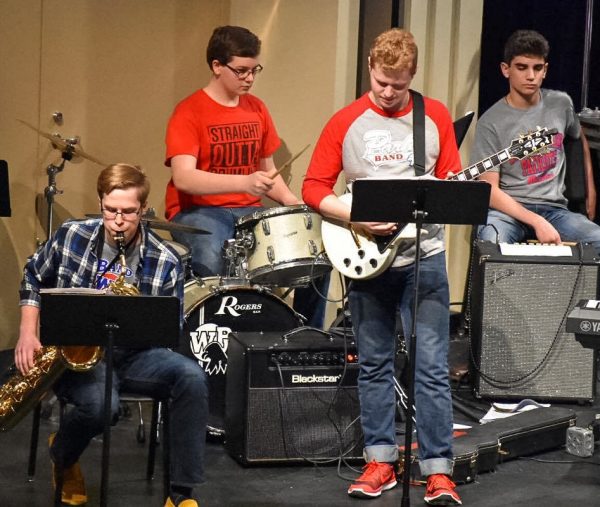 Luke and 16-year-old Vance (holding the white electric guitar) have been musically inclined for several years.

Vance is a 16-year-old sophomore, and he is a member of the school’s String Orchestra and the Young Patriots Choir, and he also is a member of the record-setting speech and debate team. During his first state competition, he nailed down a second-place finish in Duo Interpretation and third place in Declamation as the unit captured its 38th consecutive West Virginia championship.

While Vance concentrates the most on guitar, piano, and percussion instruments, 15-year-old Luke performs on every variety of saxophone, the slide trombone, piano, and clarinet. He is also a member of the high school’s Concert Choir and Steel Band.

Mazure was a member of the Park Players all three years she attended the Ohio County high school before her 1984 commencement, and she either performed in or worked on “Grease,” “Inherit the Wind,” “I Remember Mama,” and “Funny Girl,” and for her eldest son to now be involved with the organization is, well, pleasing. 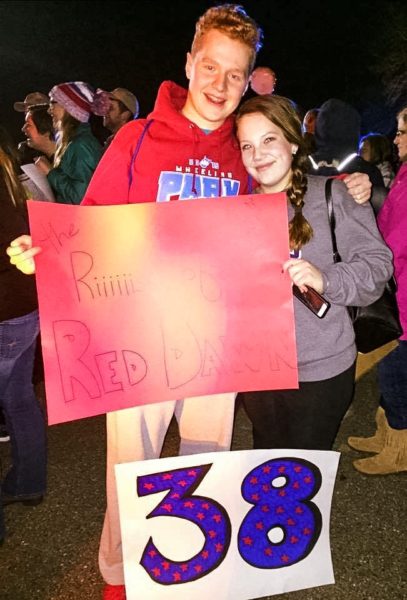 “Vance’s goal when first going to Wheeling Park was to be in the pit orchestra, and then he got into the ‘Little Mermaid” last year, and that sparked it for him,” Mazure recalled. “That experience sold him on the theater, and as someone who was into speech and theater when I was a student there, I was hoping one of my sons would get interested in those activities.

“It was his choice, too, and now he’s very much involved, and he loves it and has that passion,” she said. “That made this mother very happy. Both of the boys enjoy being on stage from being musicians, but ‘Little Mermaid’ was his first experience involving doing a show of that magnitude.”

Both of Mazure’s boys are involved with the Park Players’ spring musical, “Cinderella,” that is scheduled for April 28-30 at the J.B. Chambers Performing Arts Center. The first two shows will begin at 7 a.m., and the final show will begin at 3 p.m. 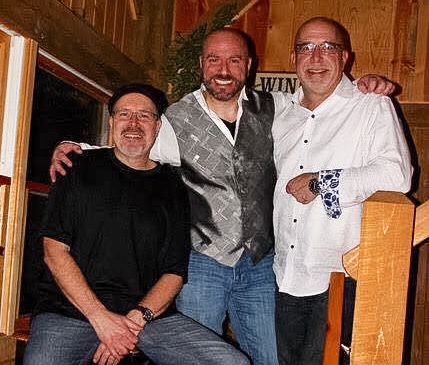 Mike Mazure (on right) has been a member of “MSM” for several years with Jim Miller and Chad Smith.

Vance is playing Prince Christopher, and Luke is a member of the technical crew and will play his soprano saxophone in the pit orchestra.

However, this is unlike other times when the Park Players have produced such performances, when school officials and the students were permitted to solicit promotion from Wheeling-area media outlets. That’s not the case this spring because of contractual clauses agreed to by Ohio County Schools.

“It’s because of the contract that they signed with the company so they could procure to the play and the use of the music,” Mazure explained. “There is currently a Broadway touring company that is performing this play, and the distributor doesn’t want any kind of confusion to occur because of the publicity about the play at Wheeling Park.

“The Broadway touring company, in fact, is scheduled to perform this play in Pittsburgh,” she continued. “So that means the school system or anyone from the high school cannot attempt to get any outside sources, but if a media source finds out about the play and they approach school officials, that’s a completely different scenario. That would be fine as long as it wasn’t anyone from the school doing the seeking.” 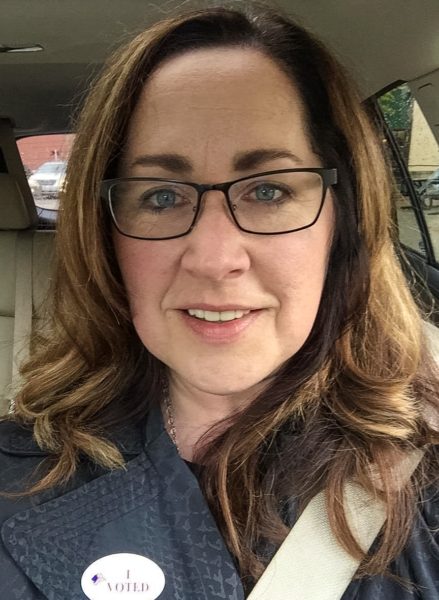 But her sons have filled in their parents on the preparations.

“Vance said that he and the other cast members are very pleased with the way everything is going, so I suspect it will be another fantastic show by the Park Players. They always are, but now that my sons are directly involved, it makes Mike and me look forward to them even more,” Mazure said. “I’m sure everyone thinks because it’s ‘Cinderella’ and it’s Disney that it’s only for children, but that’s not true at all. I believe everyone will be very pleased with it. Yes, the kids will be enthralled with it because of the princess, the prince, all of the dancing, the costumes, and all of the sets, but it’s also a story, I believe, for everyone. It’s a classic tale, and it has a little bit of something for everybody.

“And my sons and every other cast member of this show are putting in hours and hours of work after school and on the weekends. They all go to school at 7:15 a.m., and they won’t get home until after 8 p.m. because they are there working,” she explained. “They are singing, dancing, building the sets. A lot of work goes into it, but the results will be spectacular because of their dedication and because of the dedication of the teachers. The Park Players are known for putting on these spectacular productions, and not one of those students wants this year to be the year when the show is not up to par. They want that tradition to continue.” 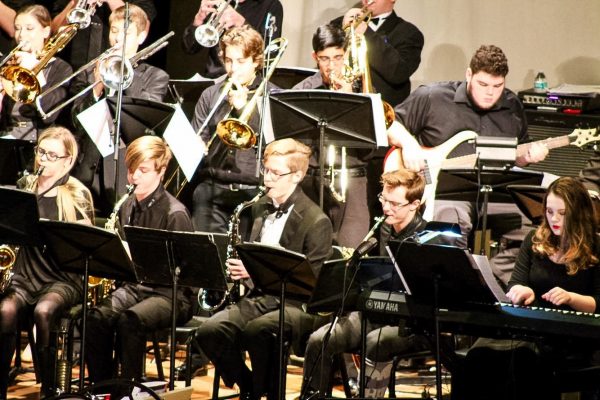 Luke (center playing the saxophone) is a freshman at Wheeling Park High and has quickly become involved with the music programs at the Ohio County high school.

When Mazure was a Park Player, though, the fall play and spring musical were staged inside the Phyllis A. Beneke Theater, but the Mazure boys and their student-thespian friends now take advantage of the J.B. Chambers Performing Arts Center.

“When I first walked into that facility, I walked to every area of the theater to look at the stage, and I cried,” Mazure said. “I cried because I thought about having the opportunity to perform on that stage and in that environment; it would have been a dream come true.

“I just might have deliberately failed a few classes just to stay there longer because of that venue,” she joked. “It’s perfection.”

(Photos provided by the Mazure family)