Distribution was a priority for the owners of the Wheeling Brewing Company even before opening the pub’s door in Centre Market, and now that goal has been realized thanks to a new partnership with Carenbauer Distributing.

Three craft beers produced by Wheeling Brewing – the Panhandle Pale Ale, the Moondog IPA, and the McColloch’s Wheat – now will be available at restaurants and bars in Ohio and Marshall counties. Quaker Steak & Lube debuted the Moondog IPA yesterday at its location at The Highlands.

“This is huge for us because it expands our market, gets our craft beers to more people than ever before, and fits our goal of putting Wheeling back on the map for brewing,” said Wheeling Brewing co-owner Chad Hill. “Wheeling has such a rich history in beer brewing, but that ended when prohibition took place in West Virginia back in 1914. But now, a new chapter is being written. 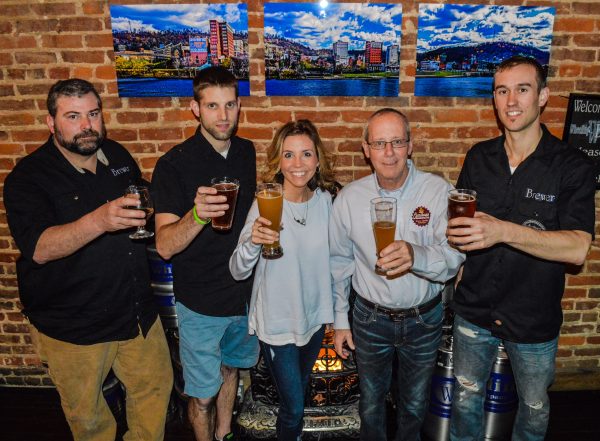 Jim Chaney, Jimmy Schulte, Erin Ball, Carl Carenbauer, and Brian Main taste a few of the brews that will be distributed in Ohio and Marshall counties.

“We have no idea where this could lead in the future, but it would be great to reach areas where craft beers have yet to be implemented,” he continued. “This is about more than making a profit to us because we see it as an opportunity to market the Wheeling Brewing Co. so we can see more people come into Wheeling to visit the pub. If that happens, then they will discover the city of Wheeling and the Centre Market area, too.”

The Wheeling Brewing Company officially opened its doors in March 2014, and along with its staple crafts several others are included on the beverage menu. The establishment’s dinner service begins daily at 4 p.m. Monday through Friday, and lunch and dinner are available on Saturdays beginning at noon.

Hill admitted that partnering with Carenbauer Distributing is a realized dream, too.

“It’s a very well-established and respected company that’s very family oriented,” he said. “The Carenbauer family has been in this business for many, many years, and the owners care about the community, and they prove it over and over. That means a lot to us. 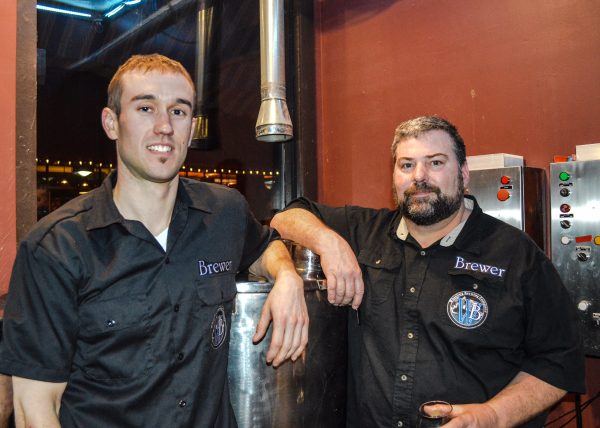 Brian Main and Jim Chaney are in charge of the brewing at the Wheeling Brewing Co.

“Our business plan has included distribution from the very beginning, and when developing the plan, our hope has always been to work with the Carenbauers to get it started in their two-county territory,” Hill continued. “We don’t believe distribution will make us ginormous or anything close to that, but our goal has always been to make a positive difference in Wheeling, and we believe this partnership is a big part of that.”

Carl Carenbauer, president of Carenbauer Distributing, said that while the company began the distribution of craft beers a few years ago, the company is excited to now include a draft beer that is brewed locally. Along with a few national crafts, Carenbauers has sold brews from Morgantown, Mountain State, and Greenbrier Valley, and also will soon offer Big Timber products from Elkins.

“Craft beers now make up 13 percent of all beers that are purchased in the United States, and it’s a trend that we don’t expect to fade anytime soon,” he said. “We’ve distributed several different beers that are produced here in West Virginia, but now we are looking forward to selling one that is brewed right here in Wheeling. 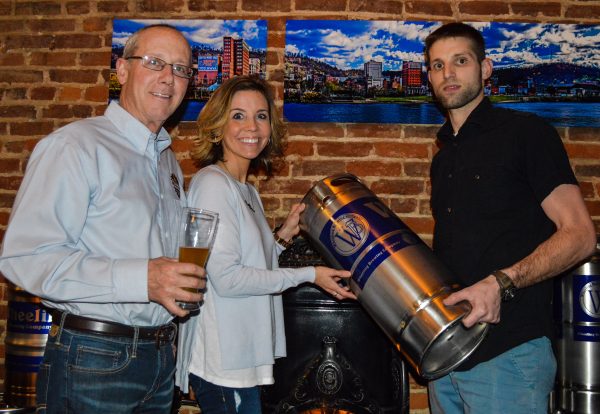 Carl Carenbauer and Erin Ball from Carenbauer Distributing accept on of the new kegs that will utilized for distribution.

Along with Quaker Steak & Lube, Carenbauer is hopeful that establishments like River City, Generations Restaurant, and Market Vines will soon choose to offer Wheeling Brewing products.

“The Wheeling Brewing Company makes some really great beers, but they are not equipped like our company is for distribution, so the partnership makes a lot of sense to everyone involved,” he said. “Right now there are maybe 10 places in Marshall and Ohio counties that have the capability of offering the craft beers, but we expect that to change in the future.” 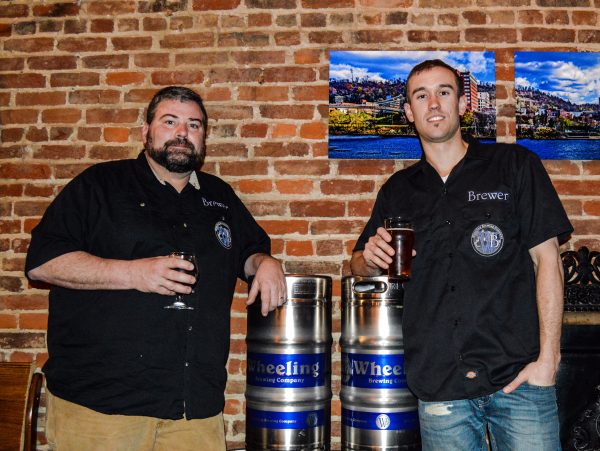 Chaney and Main have brewed the three craft beers that will soon hit the market.

“It is something new, and it usually takes some time for people to get used to the newer products that we put on tap, but I think our local customers will try it just because of the name,” she said. “Charles Waldrum is an icon in the Wheeling area, and he’s really a nice man if you have a chance to meet him like I have.

“We have a lot of customers who come in and ask if we have any crafts on tap, so we’re excited about it, and we’re hoping to add more of the craft beers from Wheeling Brewing in the future,” she added. “People are still enjoying the Bud and Bud Lights that we offer, but now there is a lot more interest in the crafts, so we’re expecting it to become pretty popular.”

“Right now most of the craft brews have a higher alcohol content than the mainstream beers like Bud and Bud Light do, but what we are seeing now are craft breweries starting to produce products with a lower alcohol content so their customers can have more than two or three,” Carenbauer reported. “And I don’t see the craft industry going away anytime soon, especially since some of the major breweries like Anheuser Busch are buying up smaller outfits across the country.

“About five years ago about 4 percent of beer drinkers were enjoying the crafts, but that number has tripled since, and I believe it will continue to grow in the years to follow. How high will that percentage get? We’ll have to wait and see,” he added. “And the popularity is growing here in the Wheeling area, too, so that’s why it’s important for us to get involved as much as we can.”