Call it karma, or cause and effect, or the result of living by the Golden Rule. However you label it, good things often come to good people.

That was certainly the case this week when Project HOPE received a donation of $100,000 from Pastor Earnest Watkins and the New Life United Methodist Church on Wheeling Island for the purchase of a mobile medical unit. Project HOPE, a branch of the Wheeling-Ohio County Health Department, is a team of medical professionals who attend to the health care needs of the homeless population on the streets of Wheeling and in local homeless shelters. The new unit will enable the team to travel together with all necessary equipment at hand as they meet their patients where they are — under bridges, in parks, and on the banks of creeks and the Ohio River.

“This gift is literally like pennies from heaven,” says Crystal Bauer, RN, director of Project HOPE. “I truly believe that Kenny had a hand in this.” 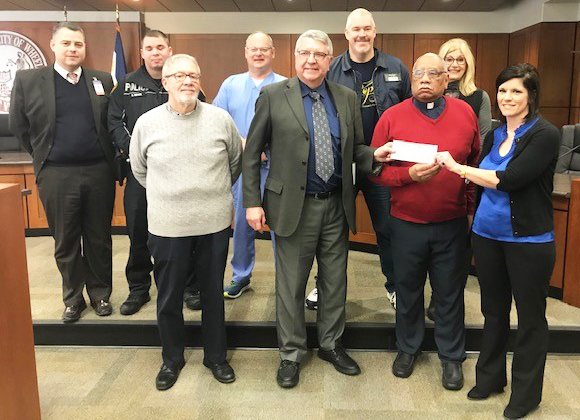 Kenny, Weelunk readers may recall from our story last October, was a beloved patient of the Project HOPE team. Kenneth Charles Leonard Jr., the son of Kenneth Charles Leonard and Mary Ann Winesburg Leonard, was born April 13, 1966, and succumbed to cancer on Nov. 17, 2018. Kenny was a roofer who sustained a work-related injury and became homeless after he was unable to return to his job. He lived at a camp along the creek, where he loved to sit and fish while enjoying music on his old portable radio. Kenny was also a mechanic who loved working on old cars — his favorite was the Ford Mustang.

Kenny’s sweet, caring and appreciative nature made him easy to love, and he quickly became extra special to the Project HOPE team. Kenny loved Crystal and Dr. William Mercer, health officer of the WOCHD and medical director of Project HOPE. Kenny often promised Nurse Crystal that he would try his best to repay her and Dr. Mercer for the love and compassion they showed him after Kenny’s cancer diagnosis in early 2017.

Kenny married briefly in his younger years but eventually divorced and had no children. His extended family lived out of the immediate area, so he was often alone while facing chemotherapy and radiation treatment. Crystal kept in close contact with Kenny during his illness, monitoring his health as well as taking him for lunch outings and haircuts as the treatment began causing him to lose his hair. Kenny sometimes referred to Crystal as his “private-duty nurse,” an inside joke that made them both laugh.

As his condition worsened, Kenny was understandably concerned that he would be alone when the time came to transition from this life to the next. Crystal and Dr. Mercer vowed that would not happen, and this dedicated pair kept that promise to Kenny as the end neared in November. They sat on either side of his hospital bed, holding his hands and providing him comfort as they lovingly escorted him to the threshold of Heaven. 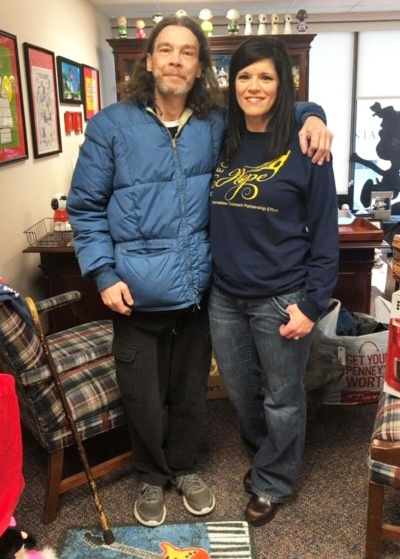 Crystal left Kenny’s bedside that afternoon and went to her office at the Health Department to finish some paperwork and try to compose herself after losing Kenny. She was still emotional when she saw a number she recognized on her phone’s caller ID — it was Pastor Watkins. She had met Pastor Watkins earlier in 2018 and given his church council a presentation about the work of Project HOPE. During this presentation, the New Life congregation asked how they could help with Project HOPE’s mission. Crystal says she had gone out on a limb and said, “We’d like to have a mobile medical unit.” She knew it was a completely over-the-top request, but she believes that if you don’t ask, the answer will always be no. The congregation thanked her and said they’d be in touch.

Months had passed, and now Pastor Watkins was calling Crystal at a weak moment. Nurses rarely allow their emotions to run amok, and Crystal is no exception to this rule. However, this was an unusually sad afternoon, and she was still struggling to get her tears in check. Crystal almost let the call go to voicemail, then a nagging voice inside told her to answer it.

Pastor Watkins told Crystal that he had good news — his congregation had voted to finance nearly the entire cost of the mobile medical unit she had requested! Crystal couldn’t contain her emotions after hearing this incredible news — Pastor Watkins shares that it took her several minutes to regain her composure. Through her tears, Crystal explained to Pastor Watkins that she’d just been with Kenny when he passed away. This led the kindhearted minister to further offer to pay for Kenny’s final expenses.

Coincidence? Crystal says absolutely not. “Kenny had a hand in the timing of these incredibly generous gifts,” she declares. “The entire situation — this very significant donation being given within hours of the end of his life — was God-spun. Kenny always said he would pay us back somehow.”

“Kenny always said he would pay us back somehow.” — Crystal Bauer 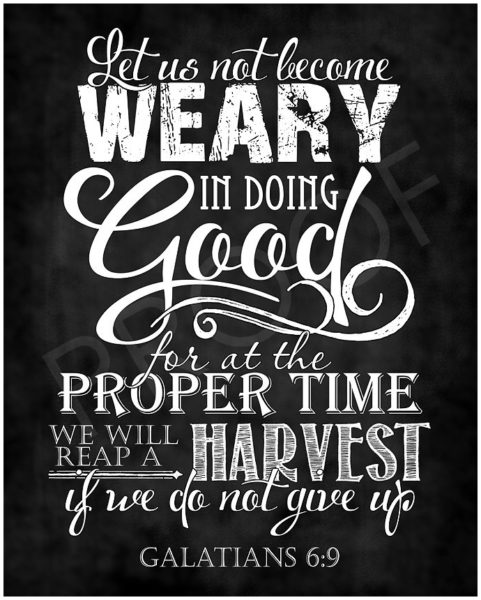 Pastor Watkins shares that his congregation looked for groups that were doing good in Wheeling so that they could share the blessings that had been bequeathed to them. It so happens that the New Life UMC knows how it feels to be in need.

“Four and a half years ago, our church was also homeless,” Pastor Watkins says. Now, however, the congregation has a building as well as financial resources that they have shared with nine other local organizations in addition to Project HOPE. “Our motto is ‘To bless others with our blessings,’” says Pastor Watkins.

The team from Project HOPE is extremely grateful for the blessing bestowed upon them by the New Life church. The congregation’s generosity will continue to pay major dividends as Project HOPE becomes equipped to reach more patients. It all comes full circle, this doing of good deeds.

In the Bible, Galatians 6:9 says, “Let us not become weary in doing good, for at the proper time, we will reap a harvest if we do not give up.” That is the lesson of Kenny’s legacy — don’t ever give up. And, Crystal might add, don’t ever be afraid to ask! 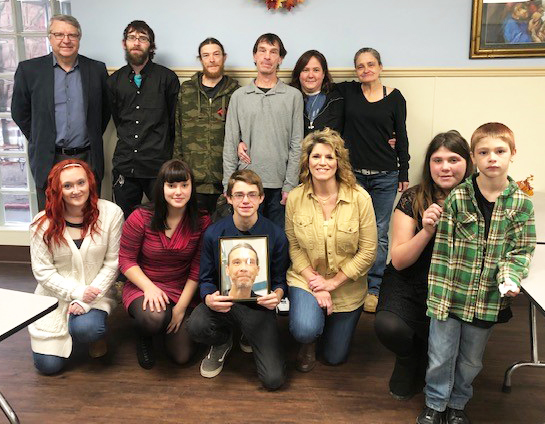 At the time of his passing at the age of 52, Kenny left behind four younger siblings — John, Robert, Patty and Brian. He is also survived by a number of beloved nephews and nieces. In addition, Kenny was preceded in death by a younger brother, George.

On Nov. 24, 2018, Project HOPE hosted a memorial service for Kenny at Catholic Charities in Wheeling. Pastor Lisa Fox of the Dallas Pike United Methodist Church presided over the service, which was attended by Kenny’s family and friends as well as many Project HOPE team members. Final arrangements were graciously handled by Altmeyer Funeral Homes.

Project HOPE plans to honor Kenny’s memory by placing a tribute to him on the new mobile unit so that his life is never forgotten. 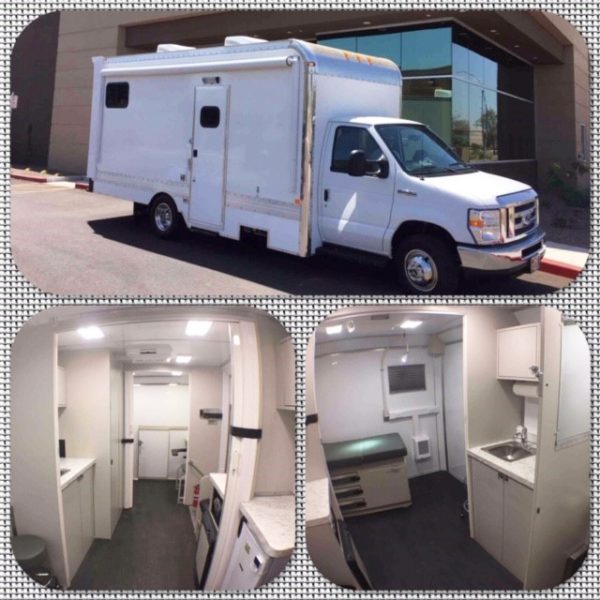 Thanks to the generosity of New Life UMC, Project HOPE will be receiving a mobile unit similar to this one in the next few months.