Sometimes, we have to make our opportunities instead of waiting for them to reveal themselves.

They were all working at the Centre Market Wing Fest this past weekend doing what they can do to make a living and to make the city of Wheeling a better place to live.

See, each one of them is “out there” as individuals, and it’s up to us, the paying consumer, if they make it or if they fail. It’s a “thumbs up” or “thumbs down” situation each time, and we are a fickle bunch of folks. We like what we like, and far too many of us cling to the past as if it’s going to save our future.

Take Antonik, for example. More than a decade ago she decided to re-enter the workforce after raising two great sons, and it took her a few years to pave a path to become the owner of a pair of local eateries. She is the proprietor of both Ruttenbcuk’s Restaurant in Dallas Pike, and Stadiums Restaurant on Edgington Lane in Wheeling, and they have menus that feature several local favorites. 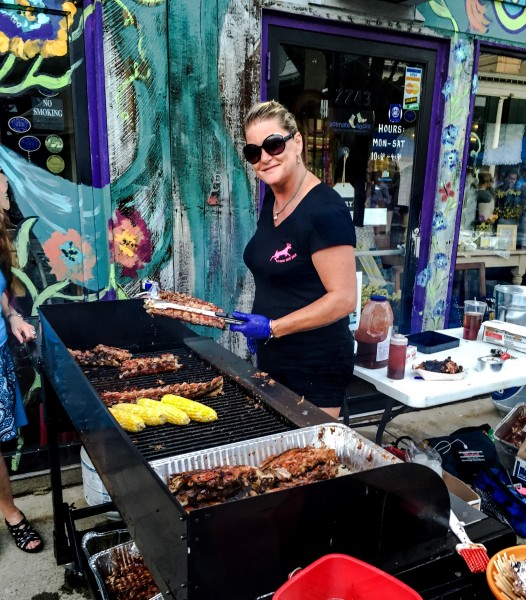 Leslie Antonik owns both Ruttenbuck’s in Dallas Pike and Stadiums on Edgington Lane in Woodsdale.

But we are a picky bunch when it comes to our meatloaf and our ribs, and we’re quick to judge hoagies and pizza and burgers, but that mattered not to Antonik when she purchased Ruttenbucks in February 2011 and opened Stadiums one year ago. Instead, it was about chasing that dream she’s had for many, many years. The idea for Stadiums, in fact, was born during a visit to Lambeau Field in Green Bay. She had a brat, and it was awesome, and she wanted to bring it back to the Friendly City. So she did.

Hamilton can sing. Boy, can he sing. He composes and performs many originals, and he nails hundreds of cover songs, too, while playing gig after gig with the band “Hit Play.” This past weekend, he played in five gigs in three days, including a performance on Pittsburgh’s Federal Street before Saturday’s 1-0 Pirates win over the Philadelphia Phillies.

For several years he performed around his jewelry sales career but decided a year ago to make a go at working as a singer/songwriter/musician only.  The move made sense, especially because of the expense of child care for their young son, Elias. So Hamilton spends his days caring for his child while scheduling the band for gigs inside and outside the Upper Ohio Valley. 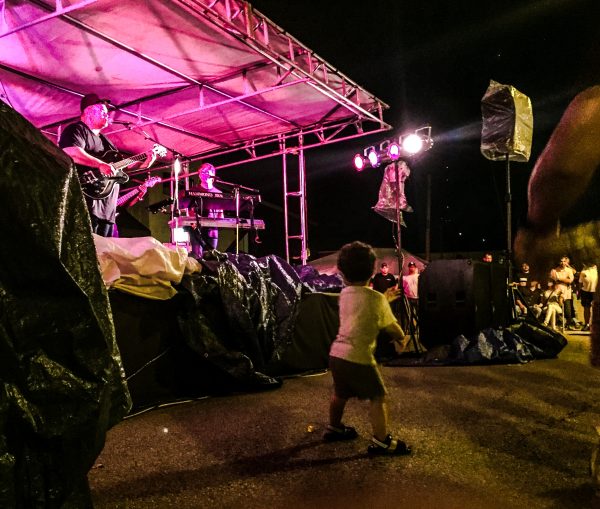 Ezra Hamilton on stage at Wing Fest while his son, Elias, dances.

Is he living his dream? Partially, but Hamilton is far from finished. While he and his bandmates work diligently to perform the cover songs to the best of their abilities, Hamilton’s primary goal is to sing his own songs all of the time. Doing so, however, doesn’t always play well here in the Valley for some reason, so for now he will continue his “human jukebox” ways, pay the bills, await his and his wife, Audrey’s second child, and continue working on taking the next step.

Banco is doing much the same, as well. He too is a talented local musician who has played the sax in more bands than he can recall. He too is a member of “Hit Play,” but he also assists several other local bands in connecting with venue owners to increase the presence of live and local music in the Upper Ohio Valley. He is the co-host of the “C.A. House Music Live & Local Hour” on AM 1600 WKKX, and Banco markets as many of the events as he can because he thoroughly believes in the talent that exists in this region.

And Banco also recently became a father for the first time, and his son, Julius, has transformed late evenings into early mornings and has provided him an entirely new perspective on life. He’s more focused than ever, and that’s because he wants to do what he’s always wanted to do with his life, and Banco wants to do it in his hometown until his talents take him wherever they make take him in the music industry. 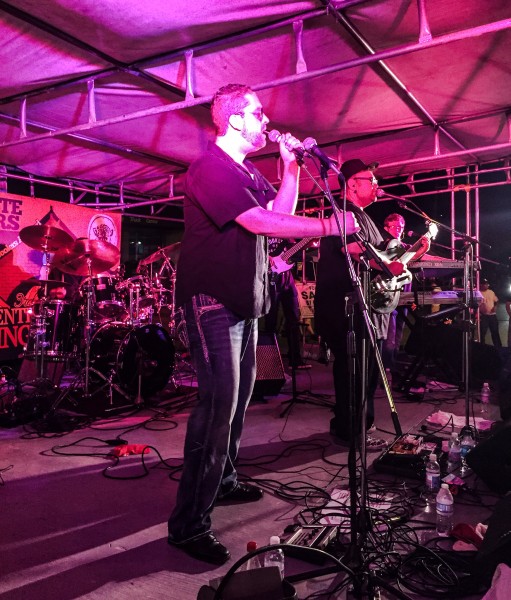 He may be singing for “Hit Play” in this photo, but Jon Banco is very talented with his sax, as well.

Their stories are our stories, though. We are all attempting to make a living and provide for our families in the ways we know how, and many of us are also searching for the answers as to how to improve the quality of life in Wheeling and the surrounding communities. Antonick, Hamilton, and Banco have come to recognize the piece of the puzzle they can provide, and more and more folks in our community have achieved the same. But not everyone has just yet, and it’s my hope that changes as local residents become more engaged with their local governments and businesses.

No one else is coming here to save the day and provide the Friendly City with her future. That’s up to us, and that’s why it’s imperative for us to do something about it.