They come home, too, except for, of course, more than 500 of the 280,000 women who have been deployed to war zones and killed in action over the past 17 years.

They are medics, nurses, pilots, judge advocates, chaplains, and intel officers, and they have names like Abby, Devon, Jessica, Christina, Jill and Ivonne. In many cases, though, their deployments have caused the destruction of a plethora of military families, and JulieHera DeStefano and Andrew Swensen discovered that fact and many others when developing the 90-minute film titled “Journey to Normal – Women of War Come Home.”

“I went to Afghanistan because I didn’t see anyone else asking the questions that I wanted to ask,” explained DeStefano, now 46 years old and a resident of Gibsonia, Pa. “Another reason I went is because I was in New York the morning of 9/11. There wasn’t anything I thought I could do to rectify any of the situations at the time, but I was confident that our military leaders would know exactly what to do, and that allowed me to settle back into what was normal for me.

“I was blissfully unaware that a war could break out at any moment,” she said. “I had lived in what is considered peace time my entire life, and I hadn’t considered service before. I had no idea what that looked like.” 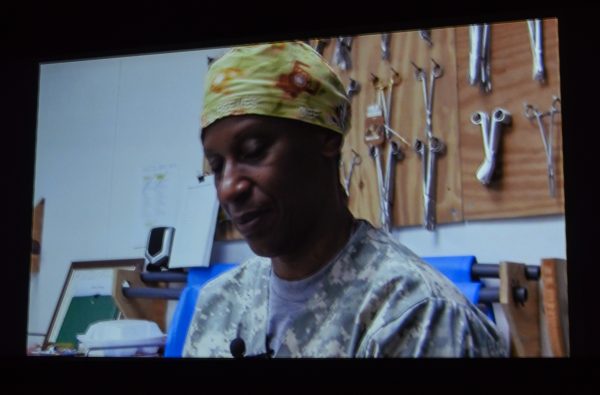 The 90-minute film delves into the lives of eight women who volunteered for the American military and have served in war zones.

DeStefano was embedded with a unit in Afghanistan for more than three months and interviewed 100 female soldiers while there because she wished to offer in the film their experiences inside and out. From there, she teamed up with Swensen and several others and then selected eight of the military members for more extensive explanations about being a daughter, a wife, a mother and a veteran of war upon their respective returns to the homeland.

More than 25 local residents joined team members from the Wheeling Vet Center for a viewing this past weekend at Oglebay Institute’s Towngate Theatre near Centre Market. Following the film, DeStefano and Swensen conducted a question-and-answer session and also asked the attendees to complete a five-question survey.

“I met Julie thanks to an introduction by a mutual friend, and that friend knew that I had an interest in film,” recalled Swensen, whose father served in the United State Army during the 1960s. “When Julie told me about this project, I listened for about 20 minutes, and I realized that she had something that was compelling and very special. It resonated with me and when she was done with her 20 minutes, and I then talked with her for another 20 minutes to offer my thoughts. I was drawn to the project because of what it could be and what it now is.

“I was drawn in by the power of the stories,” he said. “It’s a wonderful story told by wonderful storytellers who have lived through profound experiences. 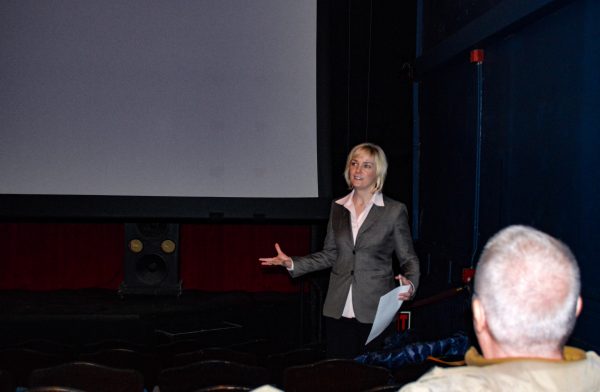 JulieHera DeStefano explained to the crowd at the Towngate Theatre this past Sunday why she felt compelled to travel to Afghanistan to interview deployed women.

Making this movie became a mission for DeStefano in 2009 after watching an episode of “Oprah” during which a female soldier was explaining her post-war challenges. The woman was injured during her deployment, causing the amputation of one of her arms, and soon after returning home, the soldier realized she would no longer be able to make a peanut butter and jelly sandwich for her daughter.

“That one-hour show changed my life forever,” she explained. “I was in New York City, and I was acting and managing a small theater, but the moment that program was over, I knew I needed to do something completely different. I had too many questions not to go after the answers because not too many people realize that our females are defending our country, too.

“I know most of us, when we think of the American soldier going to war, we think of the men who have served in our military, but women have been very involved since the very first war,” DeStefano continued. “After I chased down those answers, I knew I had to share them to anyone and everyone who would be willing to watch the film because it’s an eye-opener. After most of the screenings, most people have told us that there were moments in the movie that they would never forget. Hearing that allowed us to know we’ve accomplished one of our goals.”

At one point, it is revealed that one of the ladies (Amy Sinkler) selected for the film would not be able to participate because she was killed in action by a rocket-propelled grenade. Her journey home was much different from what was experienced by the others featured, and it also reminds former Blue Star family members how lucky they were to have their soldier come home. 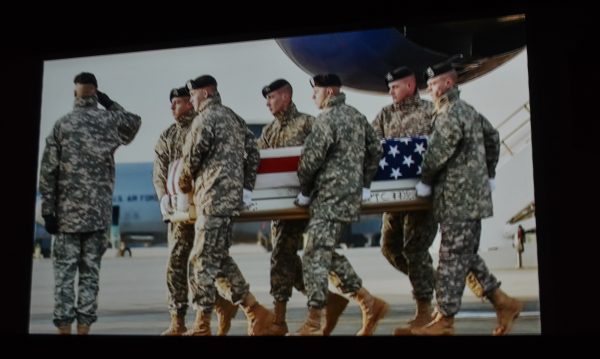 American females have been killed in action during every war during the past century.

Throughout history, the U.S. has lost female military members beginning in World War I, when 359 were killed in action. The number increased to 543 during World War II, and women also perished in Korea (2), Vietnam (8), and the Persian Gulf War (15), according to Department of Defense.

“It’s been happening since the dawn of time,” DeStefano reiterated during the post-film forum. “And they have come home with PTSD just like the men have, and they have experienced the same kind of issues after coming home, like gaining employment, fitting back into their families, and having that same connection with their spouses like they had at the time of their departure.

“And another similarity is the fact that we usually see the homecomings and the celebrations, but then most of the American people see nothing of what follows,” she said. “Not all of them get that happy ending, and that goes for all soldiers. They want to get back to their normal worlds, but at the same time they can’t pretend that war didn’t change them.”

In 1901, females were permitted to be members of non-combat roles in the military, and in 1990, women started to be assigned to combat units, but they were not allowed to engage in combat duty until January 2013. One interesting point made in the film and discussed inside the Towngate Theatre was the fact that when veterans are thanked for their service by civilians, the military member often doesn’t know how to reply. DeStefano suggested that “thank you for your sacrifice,” would be more appreciated.

“The veterans I’ve spoken with have said that it can be awkward because there’s not a lot of people who understand everything that goes into serving in the military, let alone in a war,” she said. “I know I didn’t fully understand until those 100 women opened up to me, a civilian, because I explained what it was I wanted to accomplish, and they want people to know.

“Most of us don’t know what ‘service’ means, but I think everyone understands what sacrifice is,” DeStefano added. “You get to know these women and their families in this film, and we hope to eventually have a distribution agreement in place so we can get it seen by as many people as possible.”