All I wanted for that birthday was to be “in the room where it happened.”

It’s all I talked about for at least the year or two prior to Feb. 20, 2017 — ever since my son-in-law Chris introduced me to the music of “Hamilton,” on Thanksgiving a few years ago.

It started with the Macy’s Thanksgiving Day Parade — the cast was doing a number from a show I had never heard of that had opened a few months prior. Then we watched the video of Lin-Manuel Miranda’s visit to the White House, presenting a song from a show he was working on about our Founding Fathers. Dry material for sure, right?

And then I listened to the soundtrack while out on my Thanksgiving walk. That energizing music prompted a 13-minute mile (fast for me).

A true “Hamilton” fan had been born. The emotional story of love and loss, the unbelievably clever lyrics, the stuck-in-your-head tunes. I laughed. I cried. (I tried to be walking on a back street in my neighborhood during those songs.) I skipped. (To “You’ll Be Back” sung by Jonathan Groff as King George.) I was in suspense — even though I knew how it ended.

Of course, I was not alone — as was evidenced by the clamor for sought-after tickets. And the high prices.

But still, I was willing to “Wait for It,” hoping to not miss “My Shot” to see it someday, or I’d never be “Satisfied.” I just wanted to “Stay Alive” until tickets became affordable and available. “That Would Be Enough.”

Lo and behold, just a couple of weeks after “A Winter’s Ball” in Wheeling, a surprise was divulged as I finally sat down around 9:30 p.m. at the end of a 50-plus-hour work week. It was time to “Take a Break.”

So, “The Story of Tonight” was this: We’d be leaving the house at 6 a.m. the next morning, flying (first class!) off to Chicago for a matinee of “Hamilton.”

All planned by my “Right Hand Man,” my “Obedient Servant,” my husband, Bruce. I could not “Say No to This.” He must’ve thought I was the “Best of Wives and Best of Women” to arrange this trip that would “Blow Us All Away.”

And there I was, on a warm February day, in Chicago. (Almost 70 degrees!) 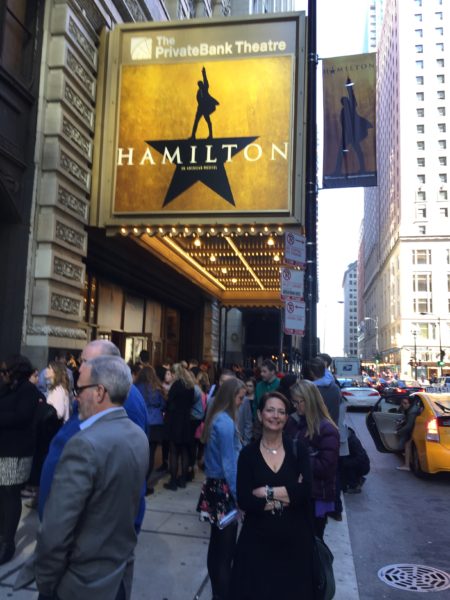 The buzz at the theater was palpable. Everyone shot selfies with the marquee behind them boasting the “Hamilton” logo. Inside, people took photos with the stage behind them before the show started. Then there were the obligatory selfies with program in hand, boasting, “I’m here! I’m here!” Everyone — not just me! These were my people — they all got it.

We were all members of the same club for sure, waiting with bated breath for the downbeat of those first few powerful notes (bmp budada dmp bmp) that made my heart stop and the tears flow, “Non-Stop.” Not for the story that day, but for the fact that I was here. I was really here. I was in The Room. It was Happening.

And it was worth the hype. Nothing at all let me down, except that it had to come to an end after a glorious two hours and 50 minutes.

Well, there was the chance stage-door meeting and photo op with “Marquis de Lafayette/Thomas Jefferson” Chris De’Sean Lee, who happened to be a good friend of Wheeling’s Nate Strasser. “I Know Him,” Nate told us! (And, later the following year, Lee performed with Nate and the Wheeling Symphony Orchestra.)

After seeing “Hamilton” once, I said to myself, “You’ll Be Back.”

And so I did … just last summer on a trip back to Chicago. I thought I’d “Burn” a little more cash (Chicago is so much less expensive than the NYC production!), and I took myself to a matinee while Bruce was busy at an orchestra league conference.

“What’d I Miss” the first time? It’s always better to see a show again, and for “Hamilton,” it’s great to get past the emotion of just being there and concentrate on what’s happening on stage.

Lucky for people everywhere, the touring production is making its way like a “Hurricane” across the country, and one of the two touring casts will set up shop at the Benedum Center from Jan. 1-27, presented by the Pittsburgh Cultural Trust.

Tens of thousands of tickets will go on sale at 9 a.m. Monday, Nov. 5, at prices ranging from $81 to $190.25 with a few premium seats at $490.25. Tickets are expected to sell out Monday, however, more may be available closer to the opening as technical holds are released. There also will be a lottery where 40 $10 tickets will be available for each performance.

Get your tickets, and “Meet Me Inside.” Maybe I’ll get to see this extraordinary show “One Last Time” … or more.