That’s what my 3-1/4-year-old granddaughter Norah told my son-in-law when she noticed half of a yellow sugar cookie and its crumbs on the kitchen table.

It’s a broken cookie. That made a mess of itself. Isn’t that how most of us would’ve seen it?

“There’s an upside to everything. You just have to find it,” said Jeannette Walls during her talk at the Hughes Lecture Series at West Liberty University on Thursday, March 22.

Norah certainly found the upside of a half-eaten cookie.

And Walls has certainly found the upside of life. Not only has she found it, but she’s helping others to find it, too. Her best-selling memoir, “The Glass Castle,” sheds light on her chaotic childhood, and she wants others to share their tales, as well. 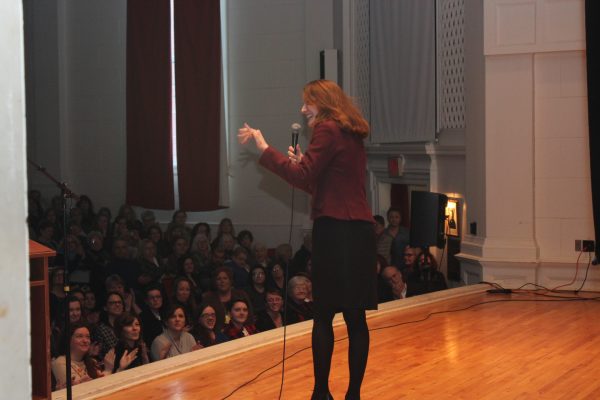 Jeannette Walls had a less than perfect childhood. Always on the move, she grew up with an alcoholic dad who squandered what little money they had on booze. Her artist mom seemed allergic to actual “mothering.” (Case in point: she hid a family-sized chocolate bar from her hungry kids, to enjoy all by herself. OK, I’ll hide chocolate from my husband, but never from my kids!)

In Welch, W.Va., where the family moved when Jeannette was about 10, she lived a true Appalachian life. No heat. No food. No money. No supervision. Buttonless coats and thread-bare, thrift-store sweaters. Their only running water was what ran through the holes in the roof.

A WLU dean told her Thursday before the talk that he “grew up dirt poor,” like she did.

“See how they share their stories?” she said to me as he walked away.

That’s why she wrote the book. It’s why she told her story to close to 500 people at WLU Thursday night. It’s why she encourages others to tell theirs. It’s why she signed books, took pictures and listened to tales from fans who stood in a line that snaked out of a university building into the cold for more than two hours after her lecture.

Bingo, on both accounts.

A “rich cheerleader” told her how she and her friends always made fun of a girl who wore outdated clothing. The cheerleader swore she wouldn’t do that ever again.

And the poor kid? He told her it “was a fine white trash story.”

“I took that as the highest compliment,” Jeannette told us Thursday night.

Our stories are not “shameful,” but “triumphant, heroic,” she said. And it’s through sharing that we can all realize that.

Our stories give us “texture,” with no apologies needed.

When Jeannette was 3 years old, she caught on fire while cooking hotdogs. The scars remain. Years later, she told her husband-to-be about those scars. He said she had “texture.” Things from the past are nothing to be ashamed of, he told her. (Gosh, you gotta love him.)

She wanted to be “nice and smooth,” like everyone else. But is everyone else nice and smooth? We all have our stories, our past, our scars. Rich, poor, everyone. “Us poor folk haven’t cornered the market on suffering,” she laughed.

After she gave a talk in Florida, a woman came up to her and said that “even silk has texture, if you look close enough.”

How on earth can someone with so much “texture,” someone who has endured so much — with so little — be such a beautiful, gracious, generous, positive, inspiring, happy, fun woman?

Why didn’t her poverty, her parents, her pain, keep her down?

Walls exudes positivity. Her hearty laugh — she calls it “cackley” — comes from deep within. It’s loud and real and resonates throughout a room.

Talk with her, and two things happen: Your problems become tiny, trivial. (So what if my computer was acting up today.) And you want to share. You want to tell her … “wait … this happened to me, too.” In an instant, she has just made you a better person.

She attributes much of her spirit to her parents — that which could’ve broken her, has saved her.

They filled her “toolbox” with what made her who she is today.

“Dreams and hope are better than coal and heat,” she said.

And the moon and stars are better than a half-eaten sugar cookie.