Today, it’s easy enough for Wheeling residents to check the day’s infection and death tallies for COVID-19, the pandemic of the day. The counts are in the local newspaper. They can be found on the internet. Should someone have special interest in another nation’s counts, those, too, can be checked in many cases.

In the summer of 1952 — when American polio cases reached their peak at nearly 60,000 infections and more than 3,000 deaths — the scale in 5-year-old Arleen Gwynne’s mind was decidedly smaller.

She was in a world of one. The one child of four in a family who was affected by the virus. One tiny girl whose arms were suddenly paralyzed. Yet, one who survived.

She got that part. Even then.

“When I was out of isolation, and in my bed in the ward, I could look across to the iron lung ward,” said Gwynne, whose married name is Buzzard, of other children and youth so affected they could not breathe on their own. “It was so sad.”

Eventually, when the family relocated from Wheeling Island to the same Woodsdale house where she lives today with husband Mike Buzzard, she was one of three. Her street — only two blocks long — was also home to two other polio survivors.

One, a boy a few houses away, appeared to have had a full recovery. The other, a teen girl, had spent time in an iron lung. Gwynne Buzzard said that girl, whom she stayed in contact with until her death, recovered in some ways, but remained in a wheelchair and had to self isolate every winter to protect her damaged lungs as she aged.

“I find so many people that don’t understand, or just weren’t born then,” she said of a sweep of disease that has nearly been eradicated from the earth and, thus, from memory. “I think it needs to be told.”

“We were island rats,” Gwynne Buzzard joked of the joys of an early childhood on the north end of Wheeling Island. That is where the growing family lived when she sickened. 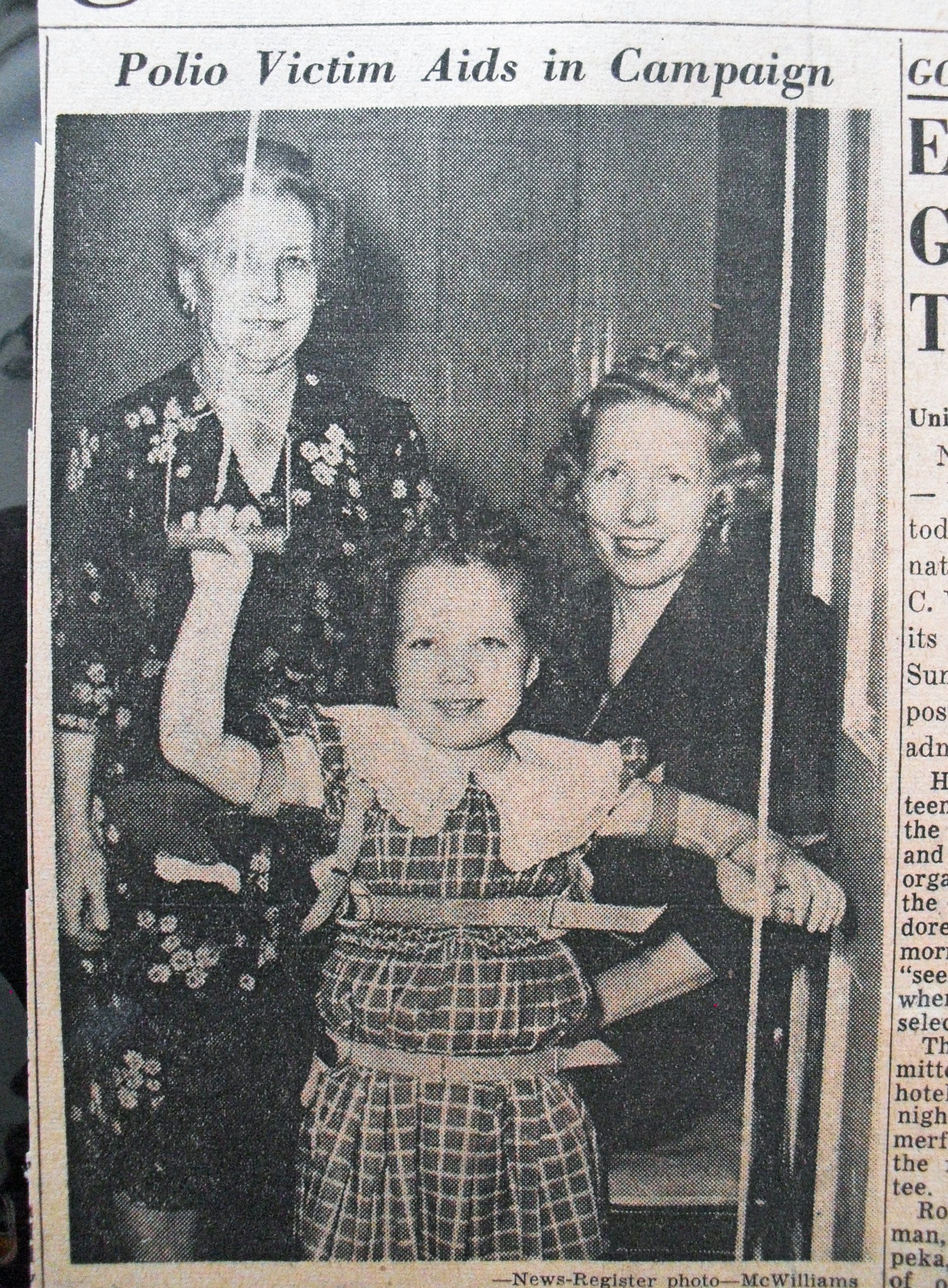 In those early days, both of Gwynne Buzzard’s arms, her shoulders and upper back were paralyzed.

“My mother (Alberta Gwynne) was pregnant at the time with my younger brother and could not go to the hospital to see me at all.” Her father, John Gwynne, left his job at Wheeling-Pittsburgh Steel twice a day to feed his daughter lunch and dinner.

The feeding was not just about paternal love. “They were so short staffed in the wards (because of the polio outbreak). They asked any parents who could come to help.

“I think my young age, being 5, kept me from understanding what was really happening. I’m sure it was hard on my parents,” Gwynne Buzzard recalled, saying she still wonders if her sister and two brothers resented the amount of care she required.

Much of that attention happened long after the nearly three weeks of hospitalization — in the form of intensive physical therapy. Gwynne Buzzard came to the hospital twice each week for the next year or so. She also worked hard at home.

“My mother and dad put an old steering wheel on a door.” Gwynne Buzzard used it to practice rotating her upper body.

Her dad would bring in buckets of boiling-hot water several times a day, as well. Gwynne Buzzard’s mother, who began coordinating the local March of Dimes anti-polio charge, had become aware of a then-controversial treatment prescribed by an Australian bush nurse named Sis. Elizabeth Kenny.

The Kenny treatment involved soaking woolen rags in the boiling water, applying them to paralyzed limbs and then passively taking the limbs through their range of motion. This was in lieu of limb-fixing braces or casts, which Gwynne Buzzard also experienced. Kenny’s method is now considered to be a foundation of modern physical therapy, according to Wikipedia.

Whatever the cause, Gwynne Buzzard eventually recovered the use of her right arm, shoulders and back. 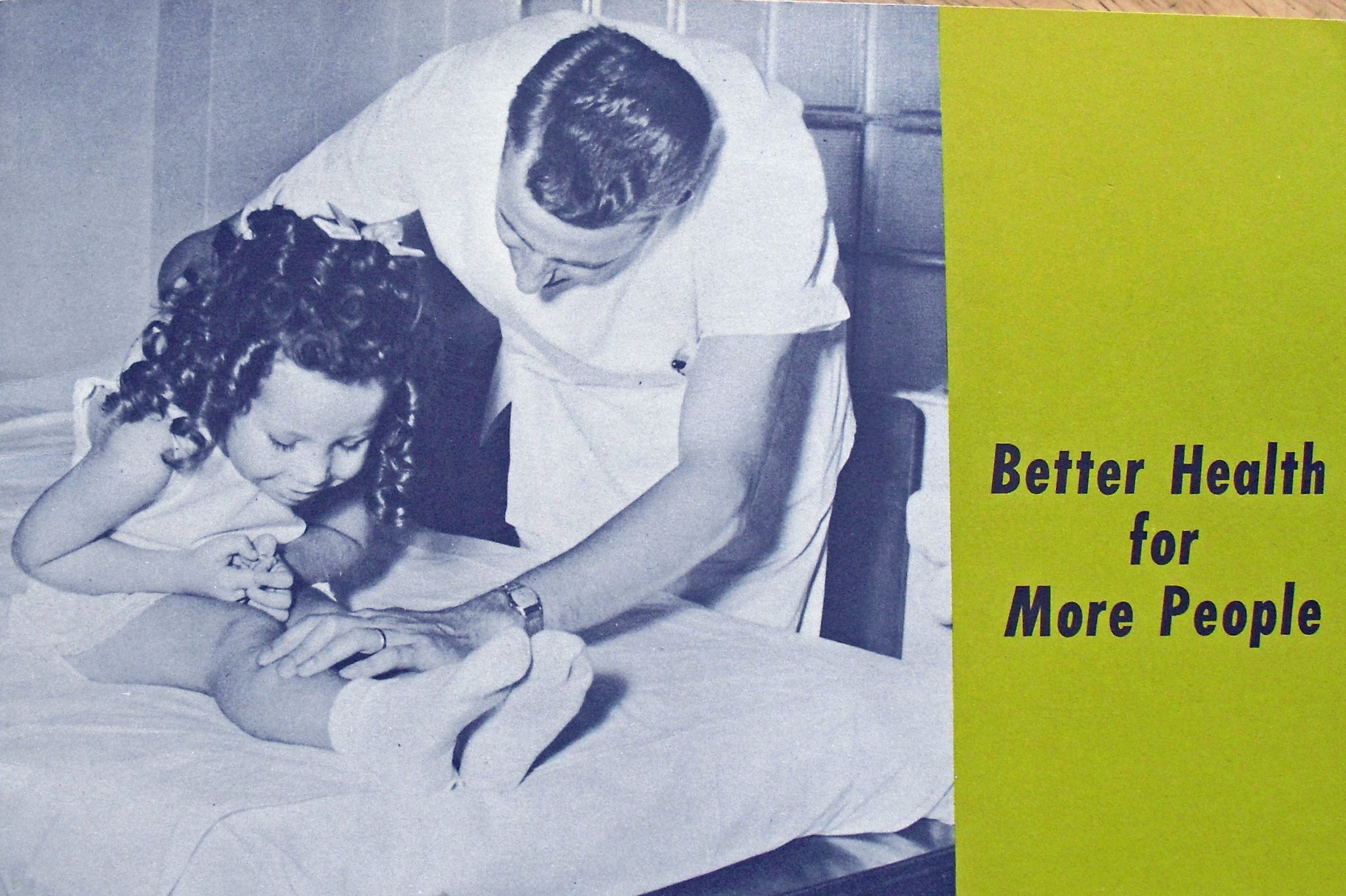 Gwynne’s successful therapy was featured on the cover of a brochure for the Ohio Valley General Hospital (later Ohio Valley Medical Center). The physical therapist shown is James Woodworth.

“Most people, when they see me, don’t even realize it,” she said of the paralysis that remains in her left arm. “It’s not that I hide it. They just don’t notice.”

Indeed, she worked many years as a secretary at locations such as Stone & Thomas Department Store and McKinley & Associates, learning to type and use computers.

There were a few concessions and adaptations along the way, however, particularly in childhood:

When she was vaccinated for smallpox, the doctor was unwilling to do so on her paralyzed arm. She carries the scar associated with that immunization on her left thigh, instead.

Another change was her hair. “I had long, Shirley Temple curls before the fever. The fever straightened my hair. My mother gave me home permanents so I wouldn’t have to worry about taking care of it.”

Later, at her grandmother’s urging, her parents sent her to Mount de Chantal Academy rather than public high school. The idea was that smaller classes would be both emotionally friendlier and physically easier to negotiate.

“It wasn’t a normal childhood, but they (family) did everything they could to make it feel normal. … My parents — they never hindered me,” Gwynne Buzzard laughed, “although they did ask me not to skydive.” 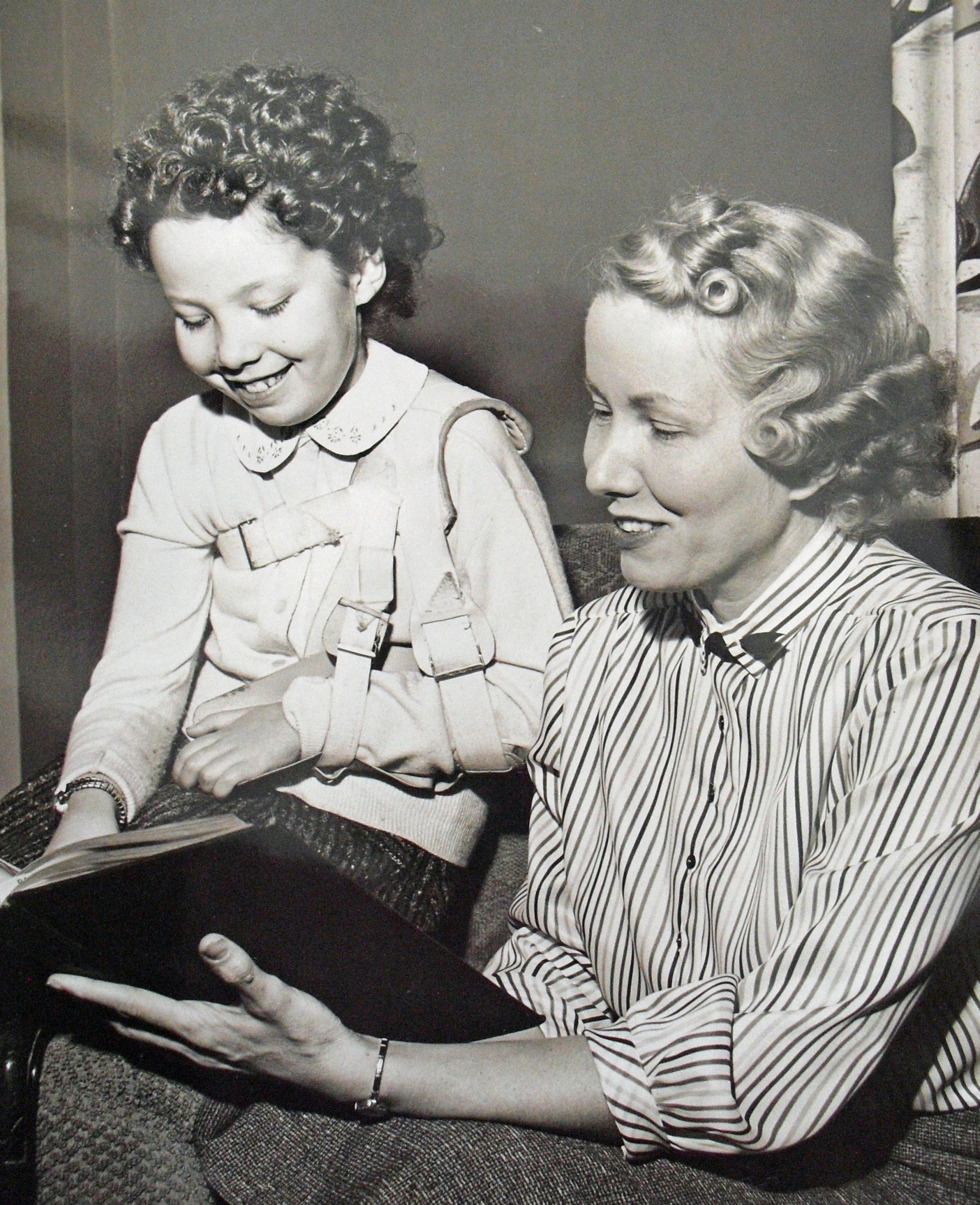 Gwynne Buzzard is watching the ever-unfolding COVID-19 outbreak carefully. Having survived one pandemic — plus a simultaneous case of chickenpox and whooping cough later in childhood — she doesn’t want to succumb to yet another.

She is a big proponent of vaccines — which have nearly rid the world of polio and greatly reduced the incidence of many other diseases.

And she’s a big fan of medical personnel.

“I can’t say enough about the health care workers,” Gwynne Buzzard said, stopping her Weelunk interview a moment to fight back tears. She stayed in touch, in fact, with one physical therapist for decades. Until the woman died, she sent Gwynne Buzzard a gift each Christmas — contained in a sphere that had to be unscrewed.

Howard Gamble, administrator of the Wheeling-Ohio County Health Department, agrees with Gwynne Buzzard. As he tracks COVID-19’s local spread, he is hoping that residents will both follow social-distancing and sanitary recommendations and that the medical community will come through with a breakthrough in addition to stellar care for those already infected.

Gamble noted polio cases dropped like a rock as soon as Jonas Salk’s vaccine —developed at the University of Pittsburgh and which included Ohio Valley children in trials — was licensed and released in 1955.

Much of the world is now declared polio free — although Afghanistan, Pakistan and a portion of western Africa have not been vaccinated to the point the disease is globally beaten, Gamble said.

He agrees with Gwynne Buzzard that the polio story needs to be more widely told —especially in a world that is now thinking seriously on the subject of pandemics. To that end, when teaching about public health at Ohio University Eastern, he dedicates one lecture to polio, which he hopes will soon be in the same category as smallpox. Smallpox, a deadly virus, exists nowhere but in labs thanks to a vigorous vaccination program.

There are similarities between COVID-19 and polio, in fact, Gamble said. Both are very contagious. Most people who are infected do not have serious symptoms. But, both can be deadly, particularly to certain populations — children and youth in the case of polio, the elderly and medically compromised in the case of COVID-19.

While there is a highly effective polio vaccine — meaning prevention, not treatment, is key, Gamble noted there has never been a vaccine for any coronavirus such as COVID-19 or even the common cold. He suspects COVID-19 may be more like HIV/AIDS. Decades into existence, that once-deadly virus still cannot be vaccine prevented. But, effective anti-viral drugs mean victims who have medical care can often live long lives.

At least that is what he hopes, he said, noting that unchecked pandemics tend to appear in waves, with later waves growing in size.

•A long-time journalist, Nora Edinger also blogs at noraedinger.com and Facebook and writes books. Her Christian chick lit and faith-related non-fiction are available on Amazon. She lives in Wheeling, where she is part of a three-generation, two-species household.