An arrest for one crime, on occasion, leads to the discovery of several more, and the irresponsible operation of a vehicle and a couple of alert Ohio County deputies could lead local and federal investigators to busting a significant credit and gift card scam that may have ties to an international stolen identity scheme in Pakistan.

Ohio County Deputy Jason Bracher Musty witnessed a Nissan Ultima with Ohio plates nearly swerve into a semi-tractor trailer at 12:10 a.m. this past Friday in the eastbound lanes of Interstate 70 near Exit 11 (Dallas Pike).

But that’s only where this story starts.

Two occupants, Dante Antone Callum of Ronkonkoma, N.Y., and Mario Barajas Jr. of Centereach, N.Y., were inside the vehicle, and Musty detected the odor of marijuana, according to the report. Musty requested assistance, and Ohio County Deputy Richard White and his K-9 officer Kruz answered the call. Callum, the report indicated, was the operator of the sedan.

“One thing led to another from talking with the involved parties road side,” explained White, a nine-year veteran of the Ohio County Sheriff’s Department. “And there are some things that I was able to witness because they were in plain view. Specifically, there were a lot of gift cards in a side compartment, and after my K-9 partner alerted on the vehicle, a search took place.

“Not only was more marijuana found but so was more and more evidence that supported the fraudulent schemes, and crimes were able to be discovered,” the deputy continued. “Unfortunately, when people are committing crimes they are also are committing other crimes, and one crime sometimes ends up bringing forth multiple crimes, there’s a process associated with that.”

Callum admitted to the deputies, states the report, that he and Barajas were smoking marijuana in the vehicle while traveling to Dayton, Ohio, and Barajas surrendered to White three cigarillo packs with the drug inside.

The buds, apparently, were pretty smelly.

“Depending on a person’s preference, there was enough marijuana found that could have been to make several ‘joints,’” White reported. “With what I do for a living, I came across it, and there was a very strong odor associated with the marijuana. I’m guessing it was to the liking of the gentleman who possessed the marijuana.

“While there are certain details I cannot release at this time, I can say that one party was somewhat cooperative, and the other not,” White said. “Both parties did admit to drug usage.” 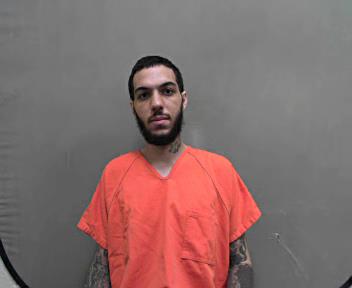 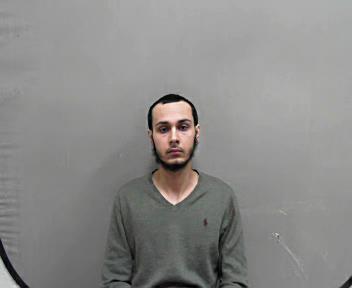 But the existence of all of the gift cards intrigued Deputy White.

After both men were read their Miranda Rights and were detained, White conducted a search of the vehicle with his K-9 partner, and Kruz indicated and reacted to the passenger-side front door seam, the report states. Both deputies continued the search, and one brown wallet continued 11 different gift cards for various locations. One card had a note on the back with, “closed” on it, and another had a note that read, “not active.”

Also discovered inside the vehicle were eight Western Union netSpend Master Cards with the name Dante Callum listed on them. Callum’s wallet contained a TFCU Visa Card as well as $1,011 in U.S. currency.

“Unless a law enforcement officer has had experience with these kinds of cases, odds are that they would not have known what they were dealing with in regards to the cards and the financial crimes,” White explained. “A high volume of gifts is what roused suspicion, and law enforcement would likely have a couple of questions, but as things progressed, it did become apparent as to what was going on.

“I have had a couple of other investigations involving this type of crime, so when I witnessed all of the gifts, I kind of had a thought that things could travel down that road,” the deputy continued. “And that’s how this traffic stop ended up where it did.”

But what about this rental car’s trunk?

The deputies discovered an opened, large brown box containing a Wonder brand embossment machine. A second opened box contained a black magnetic card reader, and a dark blue BMW backpack held a silver Toshiba laptop. Also found inside the backpack was a bottle of Renew Acetone nail polish remover, and a second backpack containing more cash – $2,762 in U.S. currency – was found along with six packs of unopened Western Union Master Cards, and 17 unmarked cards with magnetic strips. No weapons were discovered by the two deputies.

This piece of equipment can be used to emboss credit, debit, and gift cards. (Photo made available by the Ohio County Sheriff’s Office)

“We have had fraudulent scheme cases here in Ohio County, but nothing like this before. They possessed an embossment machine, the equipment for the magnetic strips, and a laptop. They have everything you would ever need to perpetrate the alleged activity,” White said. “It’s a pretty large apprehension, and now we’ll have to see where the investigation takes us.

Deputy White, who is also a veteran of the United States Army, then spoke with Callum, and during that conversation, the report states, is when Callum admitted he receives stolen account information for the cards from a connection in Pakistan.

“When you are dealing with financial crimes and fraudulent schemes, unfortunately, there is a high-volume of information that’s been collected overseas on everyday citizens,” White said. “From the breaches of security that have occurred, that information is gathered, and this is an example of how that information is being used and how it is being sold.

“The money from the sale of that information is a major concern,” he continued. “How it is being used, though, is something that we can only speculate about at this point in the investigation.”

This is a portion the evidence discovered in the rental vehicle driven by Callum. (Photo made available by the Ohio County Sheriff’s Office)

Callum and Barajas were taken into custody for fraudulent schemes and were transported to the Ohio County Sheriff’s Office in downtown Wheeling. That’s when the U.S. Secret Service was informed of the arrest. Secret Service Agent James Tad Lipscomb traveled from Charleston to Wheeling to interview Callum and the New York resident identified his contact in Pakistan as Walled Raza Kashif, the report states.

“The Secret Service can bring federal charges against these two suspects if that’s what they wish to do,” White said. “That’s up to their discretion, but right now they have been charged here in Ohio County, and they have been lodged in the Northern Regional Jail.”

“The deputies arrested two people from New York with credit card devices, and I believe those devices had the ability to allegedly change credit card information,” said Ohio County Magistrate Charles Murphy. “The bond was set at $750,000, and that’s cash-only, and the preliminary hearings will be set within 10 days.

“We have had cases that have involved credit card fraud, but nothing ever to this extent,” the 16-year magistrate said. “Most of the time it’s because someone was using a stolen credit card or a stolen gift card. But this appears to be something that we haven’t seen here in Ohio County and I have never heard the word Pakistan in any complaint.”

Callum also admitted that the pair was traveling from New York to Dayton, and the primary reason for the trip was to use the cards with the account information, states the report.

Following instincts and conducting a thorough investigation, Ohio County Chief Deputy Drage Flick said, is what netted these deputies an arrest with possible international ramifications. Callum and Barajas, in fact, were arrested in an adjacent state two days prior to their apprehension near Dallas Pike.

“Deputy Bracher Musty just felt that something was not quite right,” Flick said. “And that goes to show you what following your instincts can do for law enforcement. Many times when a deputy follows their instincts the situation turns into a much larger arrest.

“And Deputy White has been doing a lot of work with the Mountain Highway Interdiction Team because he pays a lot of attention to detail,” the chief deputy continued. “He is very thorough and this area has benefited from his hard work and diligence.”

While such an arrest is unusual in the Upper Ohio Valley area, apparent money-stealing scams are reported far too often. Dean Connors, president of CMS Bankcard Services, advises local residents to be diligent with protecting their personal and financial information at all times.

“Never, ever, ever offer any of your information to anyone on the phone because no legit business or bank is ever going to call you and ask for that information,” he said. “And the IRS is never going to do that either on the phone or in an email. The only time for you to offer personal or financial information is when you are absolutely certain who the person is.

“There are protections and procedures now in place that are protecting us from identity theft, and we are actually safer from those kinds of crimes now than ever,” he continued. “But that doesn’t mean we should ever stop protecting ourselves because those people are never going to stop trying to take what isn’t theirs.”