Johnny Cash and Billy Joel and Willie Nelson and thousands of local residents all have graced the stage of the Capitol Theatre, and that is one of the reasons why the employees of Kalkreuth Roofing and Sheet Metal are especially proud to be a part of the current project now taking place on the building’s rooftop.

The 89-year-old venue first opened in November 1928, and since then it has been the home for community programming and nationally touring performers. The cost to construct the theatre was $1 million only because the original plan for additional floors for a hotel was abandoned.

The 2.400-seat facility did fall into disrepair and previous ownership did not choose to keep the theatre updated as far as safety and fire suppression were concerned, and it was closed for a few years during the mid-2000s. However, community members gathered and orchestrated the venue’s purchase in April 2009, and it was re-opened to the public by the Wheeling Convention and Visitor’s Bureau later that same year.

“I absolutely believe this project means a little more to our employees because of what it is they are working on, and when we invited the media to come see what we’re doing here, I believe they realized even more how much this building means to this community,” Kalkreuth project estimator Geoff Wack said. “Roofing is an industry that is taken for granted a lot of times because no one really gets to see everything that goes into it, so when our employees get to see how much their work really means to people, it makes them feel more appreciated than usual. 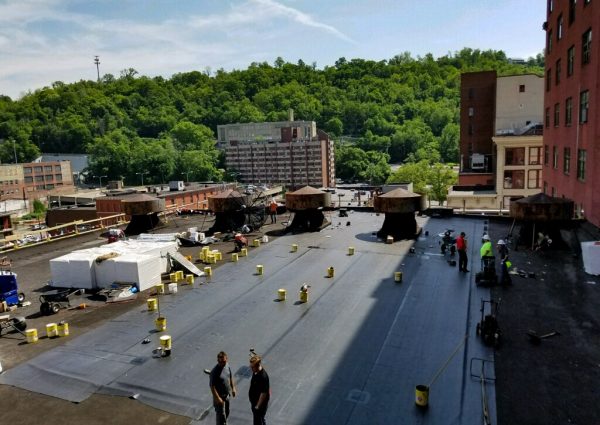 The $169,000 project involves removing the roofing now in place in favor of a new rubber roof that is expected to last for years to come.

“Plus, the historic significance of the Capitol Theatre, I believe, really means something to them because they have made memories inside the venue, too,” he said. “Especially our local guys, I believe they are very proud to be working on a project like this one because of the great story carried by this building.”

The roofing project involves removing the first two asphalt coverings placed on the Capitol Theatre’s roof during its 89-year history and replacing it with a new, rubber-style roof. The price tag on the project is $169,000, and $80,000 of the cost was supplied by the small fee included on each ticket sold for events inside the venue.

“After investigating the building’s history and speaking to folks who have been in the roofing business in this area for a lot of years, we believe the Capitol Theatre has had just two roofs during its lifetime,” explained Wack, who is also involved with sales and leak investigations for Kalkreuth. “We also believe the original roof was then covered with a new roof somewhere around the 1960s or 1970s, so we are actually removing up the first two roofs.

“The time that it takes to remove those kinds of old roofs is very job-specific, and in this case we are talking about 16,000 square feet of roofing,” he continued. “When we estimate a job like this, we try to figure out the amount of work that one person can complete in one day’s time. One thing many people likely do not realize is that we do not remove the entire roof first and then put in place the new roof. We’re only removing what we can put back in the same day.” 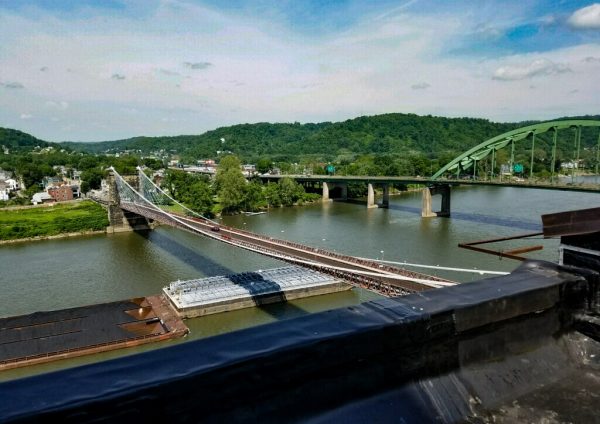 The Kalkreuth employees working on the Capitol Theatre’s roof have enjoyed this view during the first two weeks of the project.

Kalkreuth has had a seven-person crew working on the Capitol’s rooftop for a little more than a week, and Wack reported that the good weather has allowed them to make great progress thus far. Five the of the workers are from Roofers Local 188 in Wheeling, and the two other employees are from a local in the Pittsburgh area.

“The guys from Pittsburgh are here only because the (union hall) benches are empty here in Wheeling,” Wack explained. “And I would love for the people in this area to realize just how hard these employees work every day, and not just on this project but on rooftops all over this area. It takes a lot of thought to perform a project like this one, and then it takes a lot of sweat to get it down the right way.

“And performing a project like this one goes way beyond just the physical work because of the amount of intelligence that it takes to do a project like the Capitol Theatre because of the many changes that always take place in our industry,” he explained. “There are so many different kinds of roofs these days, and each manufacturer has different specifications, and our employees have to be current on all of that information before a new job begins. I am always really impressed with their intelligence because of the broad range of materials they have to know how to use.” 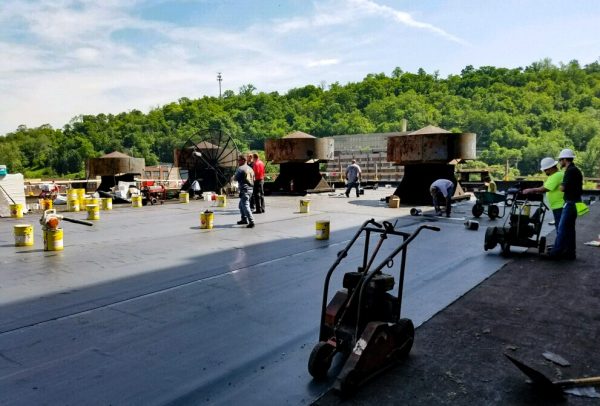 The Wheeling Convention & Visitors Bureau closed on the purchase of the Capitol Theatre on April 3, 2009.

Frank O’Brien, executive director of the Wheeling Convention and Visitors Bureau, has referred to the cost of the roofing project as a “generous one” offered by Kalkreuth.

“I referred to it that way because, not only did they want the work, but it was obvious to us that it was important to the people at Kalkreuth to be a valuable asset in the Wheeling community,” O’Brien said. “That’s how generous their bid was, and now every roof surface of the Capitol Theatre will be good for at least the next three decades.

“Since the CVB purchased the theatre, the roof was a concerne, and yes, we did realize some interior damage because of it,” he added. “But now that will no longer be a concern of ours as we get closer and closer to take care of the debt service on the building. It’s only three more years, and we will be free from those payments and able to use those funds in other ways to attract more and more people to the city of Wheeling.”