One news report from 2016 that spurred much conversation in the Wheeling area and attracted regional attention to the historic Suspension Bridge took place on March 23, when the driver of a fully loaded Greyhound Bus opted to cruise over the 167-year-old span despite the clearly posted 2-ton weight limit.

He was on Wheeling Island. He was lost, he was frustrated, and later that day, the driver was fined by Wheeling Police then fired by his employer.

The Wheeling Suspension Bridge was closed for nearly a week while a complete inspection took place and repairs were completed from the damage caused by the 18-ton passenger bus, and ever since a debate has been entertained by Wheeling residents about whether or not the original “Gateway to the West” should be closed to vehicular traffic in the name of preservation.

“I am open to all options from the perspective of Wheeling heritage and preservation because the preservation of such a landmark is so very important,” said Jake Dougherty, executive director of Wheeling Heritage. “I believe the Suspension Bridge would make for a very interesting pedestrian bridge, but I am not sure that closing it to walkers only would increase the walkability for the downtown.” 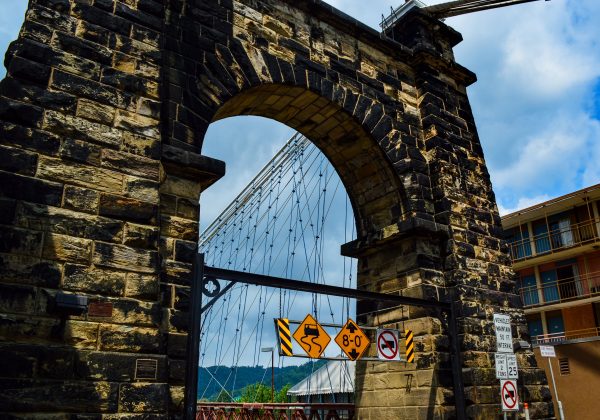 It is 167 years old and was meant for horses and buggies and not Greyhound buses.

Wheeling Mayor Glenn Elliott has heard the talk, he’s seen several Facebook threads concerning the future of the historical landmark, and also he has spoken with residents of Wheeling Island on the matter.

“I want to see the Suspension Bridge remain open to vehicular traffic. But after meeting with Division of Highways District 6 Acting District Engineer Gus Suwaid earlier this year, I am convinced that some reasonable steps need to be taken to control the type and frequency of traffic utilizing the structure,” he offered. “The bottom line is that this bridge was designed and built in the mid-19th Century to accommodate horse-drawn carriages—not 5,000 lb. SUVs—and the current signage is not adequately deterring (or preventing) use by heavier vehicles.

“And on at least one occasion they failed to stop a passenger bus,” Elliott recalled. “So I think it’s imperative that we work with Mr. Suwaid and his team to come up with a more aggressive approach to deter or prevent bridge access by heavier vehicles.”

Suwaid has worked with Wheeling Police Chief Shawn Schwertfeger in an effort to raise awareness concerning the span’s weight and height limits as well as the 50-foot interval rule, all of which are posted with signage on both ends of the 1,010-foot structure. Charles Ellet Jr. designed this bridge, and because it was the first span over the Ohio River, its significance reaches far beyond the borders of the Friendly City. It was during a windstorm on May 17, 1854, when the bridge deck was twirled as high as the eastside tower before collapsing into the river. Ellet rebuilt it, and the span has been fortified since. Ellet’s original design was for a 16-foot-wide travel deck, but in 1956 the state chose to diminish the walkway areas to add four feet in roadway width. 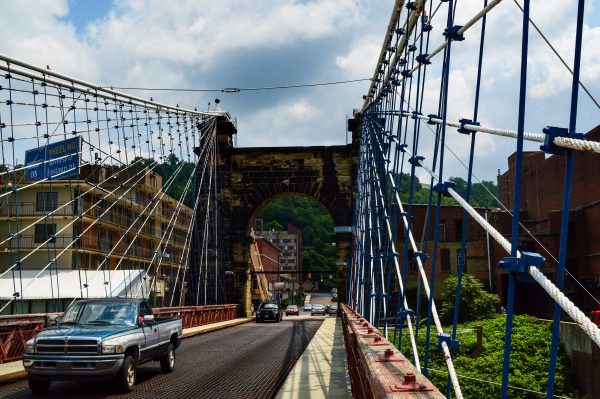 Local conversations have taken place about closing the historic span to vehicular traffic, but the discussion has yet to be entertained on the state level.

The Wheeling Suspension Bridge was first recognized as a National Historic Landmark in 1975.

“And as far as closing the Suspension Bridge to vehicles, there is no such conversation taking place on the state level about closing it,” Suwaid confirmed. “And that’s because you have to look at this issues objectively because of the importance of that bridge to the people on Wheeling Island. The bridge has been there for a very long time, and those residents are used to having it convenient access instead of using the interstate.

“There have been several incidents; that is true, and we have been lucky that the last few did not cause any structural issues on the Suspension Bridge,” he continued. “I am still working with our environmental department, local historical landmark commission, and with the people at Wheeling Heritage to develop a solution. There have been a few ideas we have discussed, and the conversation will continue into 2017.”

In the past two years the Wheeling Suspension Bridge has been closed to traffic for repairs following a failed cable and multiple vehicular accidents that have taken place. Most recently a Wheeling police officer was involved in a head-on collision after East Ohio resident Donald Daniels led law enforcement on a high-speed chase that originated in Martins Ferry and ended near the middle of the bridge. 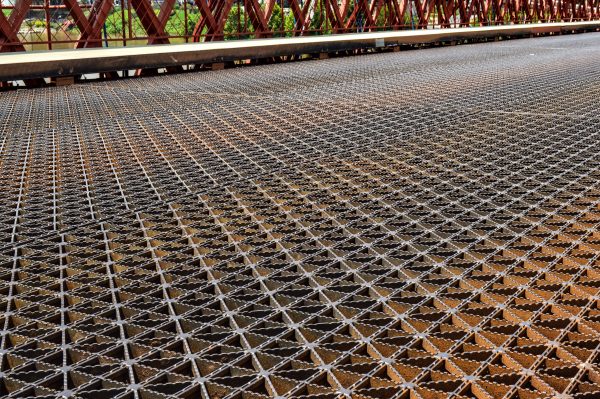 There is a 2-ton weight limit, an eight-foot height limit, and also a 50-foot interval rule in place when traveling across the Suspension Bridge.

But it was that Greyhound bus that provoked passion for preserving the span from many current residents as well as natives of the Friendly City following the story online.

“The Division of Highways is not an enforcement agency, so we were not in charge of the consequences when someone drives an overweight vehicle on the Suspension Bridge, but what we did do after the driver took the bus over it, is gain access to their insurance that takes care of all of the expenses incurred for the inspection and the repair work that needed to be performed,” Suwaid said. “I can tell you that the total cost was between $15,000 and $20,000, which covered the repairs and the inspections. That was a special assignment that time.

A maintenance and beautification project that would cost approximately $10 million has been in the works for the Wheeling Suspension Bridge for several years, and Suwaid attempted to add to the plan a weight restrictive system but the suggestions were not met with the approval by local historical officials.

“We have had meetings with DOH officials, and we have responded to proposals concerning the signage and the efforts to enforce the weight limit, and Wheeling Heritage has adopted the position that we do not believe those options would not be appropriate to the aesthetic to a national landmark,” Dougherty explained. “We have also discussed various alternatives to their ideas, and the topic of making it a pedestrian-only bridge was briefly discussed. There were also other ideas as far as slowing down and limiting the overweight traffic in a more advanced way.” 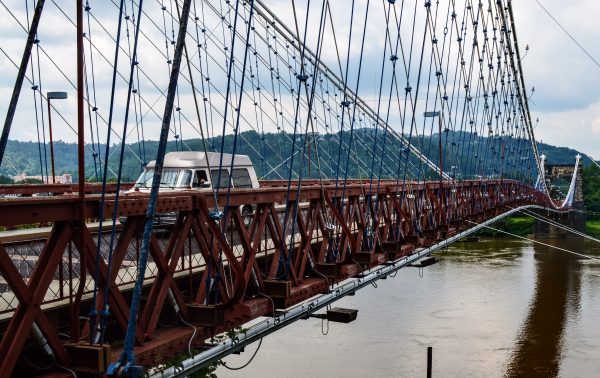 A $10 million maintenance and preservation project has been planned for the Wheeling Suspension Bridge for several years.

Suwaid, though, is determined.

“Unfortunately we have not come up with a solution that is satisfactory to everyone involved in that discussion just yet because of the historic criteria. The state has suggested a weight-limit system, but the local people thought that it was visually intrusive and that it is not consistent with the legacy, the looks, and the historic image of that bridge,” Suwaid reported. “And that’s OK because I understand that perspective, and that’s why we will keep working on it.