A few Wheeling residents officially kicked off the election cycle that finally ended yesterday in the Upper Ohio Valley when they announced in May 2015 their intentions to run for council positions and the mayor’s office, and now that the general election has taken place, local citizens will have at least a year to recuperate.

Thanks to a brutal presidential cycle that began with 17 Republicans on one side and six Democratic candidates on the other, many voters, incumbents, and candidates are thrilled for the process to be complete.

“I can tell you one thing; I have been very happy that I wasn’t on this ballot,” admitted Belmont County Commissioner Mark Thomas. “Because of what has been taking place at the top of the ballot, this election cycle has been something I’ve never witnessed in my lifetime. It’s been incredible with all of the scandals and controversies involving both of the presidential nominees.

“I think people went to the polls trying to figure out which one was the lesser of the two evils, and that’s not how it should be, in my opinion,” he said. “And everyone else on the ballot, whether they were running for a local or state office, had to deal with it because, for so long, the race for president has been the only political topic anyone has wanted to talk about. That makes it bad, especially while running for a local position like Belmont County commissioner.” 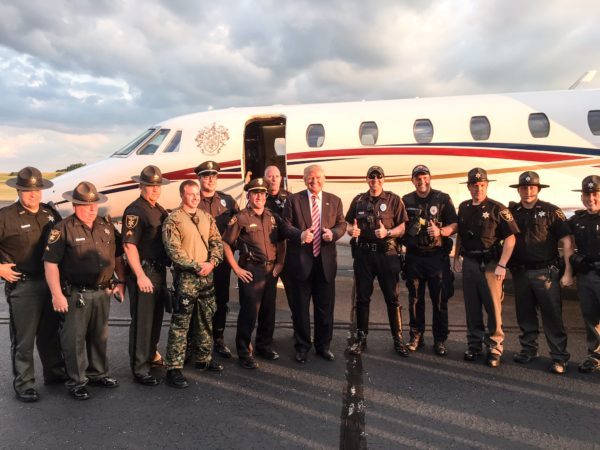 President-elect Donald Trump posed with a number of Ohio County deputies when he visited Wheeling and East Ohio during the election cycle.

It has been a presidential cycle that’s included a plethora of name-calling and a lack of civil debate pertaining to any of the country’s primary issues involving the economy, national security, the welfare of American veterans, health care, and gun rights.

Thomas does plan to seek re-election, but that campaign is two years away. Does he expect that cycle to be different from this one?

“I don’t think anyone can predict that, but I certainly hope it’s different,” he said. “Campaigns should be about platforms, policy, and the issues, but we haven’t seen enough of that this time around. And all the anonymous money hasn’t helped, and that’s why a lot of people believe nothing is going to change until, somehow, we figure out how to get the money out of our elections.”

In Ohio County the ballot displayed three contested races including candidates for sheriff, assessor, and prosecutor. Democrat Tom Howard, a 21-year veteran of the Wheeling Police Department, proved successful in his bid to become the county’s next sheriff; Democrat Tiffany Hoffman, daughter of former assessor Kathie Hoffman, will become the next assessor at the beginning of 2017; and incumbent prosecutor Scott Smith was returned to the position for another four-year term. 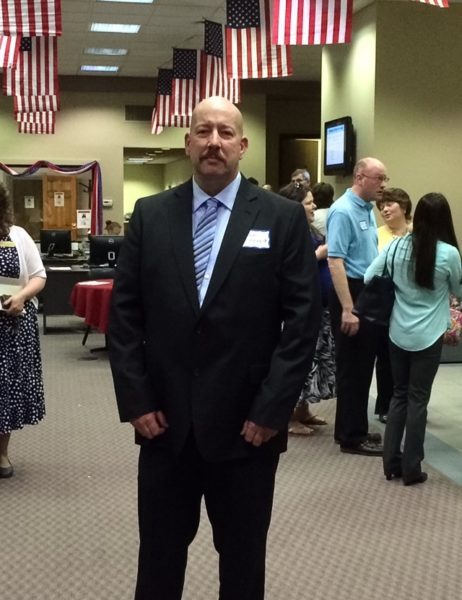 Tom Howard has been with the Wheeling Police Department for 21 years.

Ohio County voters also were offered the opportunity to vote for two of three candidates for state delegate to represent the Third House District, an area that covers nearly all of the county. Two incumbents, Dels. Shawn Fluharty and Erikka Storch, orchestrated re-election campaigns and one candidate, Republican Scott Reed, attempted to unseat one of the representatives.

“For the most part I concentrated on my race but whenever I spoke with voters they always asked a lot of questions about the presidential race,” said Storch, who was re-elected to the House of Delegates along with Fluharty. “I think they were looking for some logic from me, but who could make sense of it? There’s been something new every day, and it’s been exhausting.

“Eventually those conversations got back to Ohio County and to the State of West Virginia, so I was able to hear about their concerns about where we live and how they feel about what’s taken place in Charleston during the legislative sessions,” the lawmaker continued. “And even though we’ve had Election Day, I doubt either one of them goes away anytime soon. One will be president, so we know we’ll hear from them for the next four years, but what about the other one? Who knows?”

Del. Fluharty was a supporter of presidential candidate Sen. Bernie Sanders and even introduced him during a political rally in Morgantown, but he recognized Trump’s popularity early in the process and predicted he would remain in the mix to the end.

“There were several more qualified candidates on the Republican side, but it seemed like a lot of people could identify with what he was saying from the very beginning,” the Democrat said. “I think what really got him noticed in the very beginning is that he was talking tough on immigration, and making Mexico pay for the wall resonated with a lot of people for some reason. 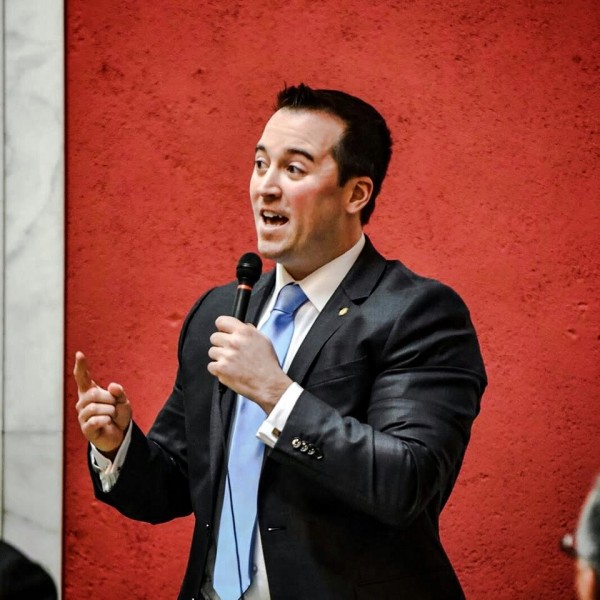 “I know most people thought he would fizzle out again, but I just had a feeling that this time he was in it to win it,” Fluharty continued. “Plus, there were a lot of people who were anti-establishment this time around, and he represented that more than any of the other Republican candidates.”

The political pundits predicted voters in the state of West Virginia would vote for the Republican nominee and gain the state’s five Electoral College votes, and that’s exactly what took place, but the state of Ohio’s 18 votes, it was believed before yesterday, were up for grabs. Since Ohioans sided with President Bill Clinton when the Democrat ran for a second term in the White House in 1996, the state’s majority have voted in favor of two Democrats and a pair of Republicans, all of whom won the American presidency. 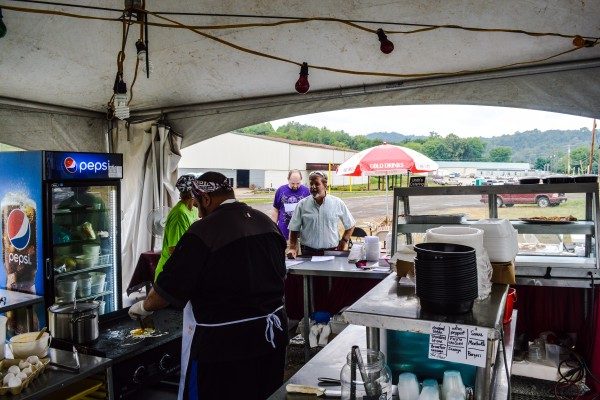 Belmont County Commission Matt Coffland (standing at the counter) refers to himself as a “hands-on” commissioner who travels his jurisdiction often.

“And as most people know, no one has lost the state of Ohio and still won the presidential race,” Commissioner Thomas reported. “The results have always been very close in Ohio during my lifetime with the winners gaining very slim margins of victory. It’s always interesting to see who the people of our state favor and why, and that’s why Ohio has always been one of those battleground states that gets a lot of attention from most of the presidential candidates.

“I have reminded as many people I could how important it is to vote in your local races with enough of an education to choose the candidate that best fits what you want them to do and how you want your community to grow,” he added. “You hear it all of the time – politics is local – and that’s because it’s very, very true. The decisions that are made on a local level impact your life more often than what they do on the federal level, and that includes in our cities, townships, counties, and in the state. I know everyone I know got caught up with the race for president, and I know that some people turned it off and gave up on the process, but I do hope those voters still went to the polls for the local elections and issues.”