New trees, painted benches, spruced up parks, and the installation of a disc golf course are all planned during the “Pride in Wheeling” community event set to take place Friday, June 2nd, at three different locations.

Approximately 100 volunteers from a few different local businesses will help transform three park and playground areas today on Wheeling Island, in North Wheeling, and in the Woodsdale neighborhood, and any and all who would like to join the effort are more than welcome to do so. The Wheeling Island Marina is a long swath of land soon to feature disc golf; a mural will be painted at Wilson Playground along Main Street in North Wheeling; and North and South Parks along Poplar Avenue will receive a makeover between 10 a.m. and 4 p.m.

“In the area of Woodsdale where North and South Parks are located, we know that those areas are visited pretty often by the residents, so it’s a really great area for us to improve for the people who live in that area,” explained Orrick summer associate Mike Disotel. “And the marina area is one of the biggest parks in the city, so we thought it was a natural for us to go there and do what we can do to improve it.

“And the Wilson Playground is an important area for that part of Wheeling, and we are aware that it is one of the playgrounds the city plans to upgrade, so we believe we can even make it better through this volunteer effort,” he said. “Plus, that playground has a great wall for the mural that was designed by local artist Amanda Carney.” 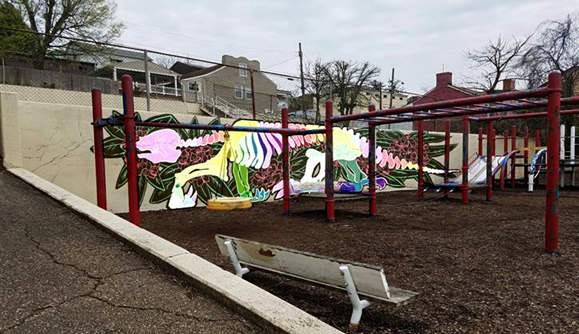 This rendering displays the mural that will be painted at the Wilson Playground in North Wheeling.

“The Pride in Wheeling” effort also is part of a mission adopted by Orrick.

“Orrick is an international law firm, and one of the firm’s most important ideals is a diversity and inclusion commitment, and every year we select a specific theme for these community efforts. This year’s theme is unity,” Disotel explained. “It’s about bringing people together so we can all appreciate our similarities and our differences. In the end, we are all similar people to some extent.

“It’s something we feel our firm can bring to this city in addition to what city government has already accomplished by approving the non-discrimination ordinance in December,” he said. “We all may be different in our ways, but we all live in the Wheeling area and want to make it an even better place to live.”

Providing a sustainable impact is the primary goal, too, because the planned beautification project is meant to be long-term. For example, at North and South Parks, the benches that are scattered along crisscrossing walkways will be painted a shade of green and “City of Wheeling” will be inscribed along the top back support on each seating apparatus,

“We felt we could attract more people to participate with these efforts by opening it up to the entire community because before it really involved just a few local attorneys,” Disotel said. “And we have also expanded the hours so people would have more of a window in their day to get involved. That way, the improvements that are made are not temporary but instead something that will last so those neighborhoods can enjoy them for years to come. 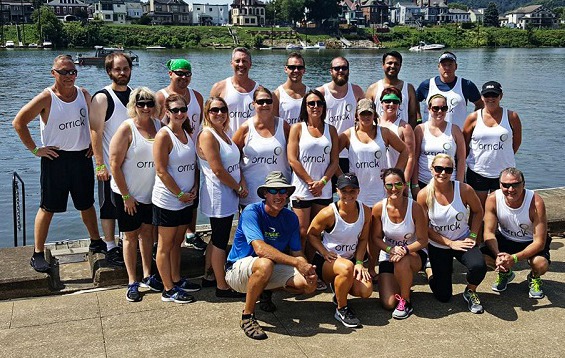 The Dragon Boat Races, an event that benefits King’s Daughters, is held each August on the Ohio River.

“One of the great things about working at Orrick is that everyone in our building here in Wheeling are behind these efforts in one way or another,” he said. “We also have various locations across the United States and the globe, and similar efforts are made in those communities, too. As a firm, we have diversity and inclusion days at those locations at different times of the year so the impact can be timely to those cities.”

Disotel said members of the respective communities in which these efforts will be performed should feel free to simply show up to join the assigned groups. All materials will be provided, and the volunteers are free to work as much as they see fit. If an individual would like to speak with him, Disotel can be reached at (304) 231-2229.

“Right now, the majority of the volunteers are from Orrick, but we also have folks from Fort Henry Capital, from Williams Lea, and from the Dinsmore & Shohl law firm, as well,” Disotel reported. “And the more, the merrier. We would love to see even more people meet us at the three chosen locations [today] if they want to get involved with this ‘Pride in Wheeling’ effort.

“Our group will split up, so if there are folks who are from Wheeling Island, North Wheeling, or Woodsdale that want to help improve their own neighborhoods, they would be very welcomed,” he continued. “And we do plan to work in two-hour shifts so the volunteers are not obligated to offer their entire day. It’s really up to them, and we would be very pleased if they wanted to join us. We’ll be painting, cleaning up, installing the baskets for disc golf, and a number of other things at the three locations, so the volunteers will have plenty of activities to consider.” 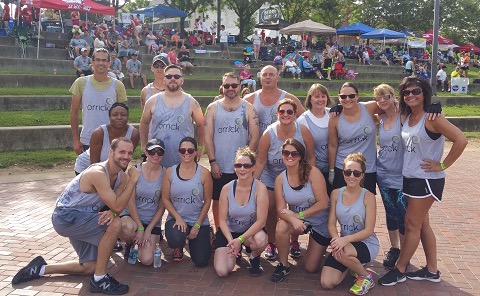 The law firm’s volunteers have been involved in several events at Heritage Port.

A native of the Youngstown area, Disotel now resides outside the city of Pittsburgh, but as soon as he arrived at firm’s global operations center near downtown Wheeling, he experienced something new

“I really never have seen what I have witnessed here in any of the areas where I have lived while growing up, when I went to college, and where I live now,” he admitted. “Here in Wheeling it seems as if everyone is involved with making this city a better place, and everyone is very friendly while also trying to make the community work for everyone who lives here. It’s really a testament to the people in this city, and it surprised me because I had never experienced it before.

“That’s why it makes me proud to now be involved with that movement in at least a small way and why we believe this effort could be something we organize and perform on an annual basis,” he added. “We believe these kinds of sustainable impacts can be made all over Wheeling, at the parks, the playgrounds, and in the different neighborhoods here to improve the quality of life by making the improvements while collecting community members together. We really see it as a win-win.”

(The photos were provided by Orrick, Herrington & Sutcliffe, LLP)