Wheeling-native and vocalist Mollie O’Brien joins pianist Bob Thompson in his annual Joy to the World Christmastime concert. Last year Thompson took the show on the West Virginian roads, and this year, Wheeling is on the list of communities to receive the show:

Glynis Board of West Virginia Public Radio spoke to the two about the upcoming festivities:

Board: Joy the The World has become an annual tradition. What got it started?

Bob Thompson: Well, this will be our 22nd year. It all started just from a suggestion by Don Wafer who used to be a producer here at West Virginia Public Radio. He said to me one day, “Bob, you should do a Christmas show!” I thought about it and I said, well, let’s give it a try. We started out just thinking it would be something that we would do locally here in Charleston and every year we got great crowds and we just tried to keep it going.

I think Mollie was on our show when we first go it started. She was maybe our sixth guest. So this is really an exciting time to have her back again with us. 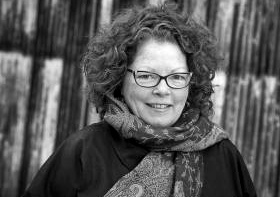 Board: Do you remember how that combination came to be?

Thompson: Mollie was also a frequent guest on Mountain Stage. And I got to hear her and just loved her singing. She’s got such a great voice. So it was just natural.

Board: Do you remember what that was like, Mollie?

Mollie O’Brien: Oh yes, I do. I just remember being so nervous the night before that I couldn’t sleep! And I was so tired! But you know, adrenalin kicks in and all the excitement and nervousness. It was fun, and a great band with Bob at the helm.

Thompson: I didn’t realize you were nervous. I guess I can understand why because when the guest artist comes in we have one rehearsal the day before, and then sound checks the day of the show, and that’s it! So.

Board: And is there always a guest artist?

Thompson: Yes, always a guest artist. And the band has stayed pretty much the same. But now we’ve added Ryan Kennedy on guitar, John Inghram on bass, and Tim Courts on drums, and Doug Payne on Drums. Doug is the only other person besides myself that’s been on every show.

Board: So after over two decades of what I’m calling “serious caroling”, are there any prominent favorites?

Thompson: There are certain songs that are just so strongly part of the tradition that they are over and over again. One of them being the Christmas Song. That’s a classic.

It’s really a challenge to come up with new material every year. So far, we’ve been able to do some material that we’ve never done before, which is kind of amazing. And then, when we do something we’ve done in the past, we always try to give it a new treatment.

Mollie, she has brought us some tunes this time which are a combination of some of the classics and some tunes that I had never heard before.

O’Brien: I feel like that’s a breakthrough to have something that you’ve never heard of before!

We love those songs! And it’s not like you hear them all year. 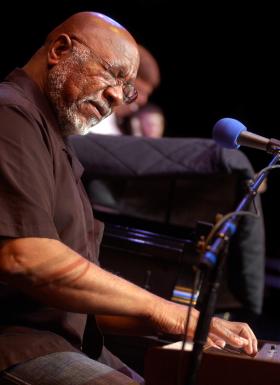 Board: So this is your second tour spreading Joy around the state?

Thompson: Yes, this is the second year. Last year we went to Elkins and Morgantown, besides our Charleston show. This year we’re going to be in Wheeling and also in Beckley. And Wheeling, being the hometown of Mollie O’Brien.

O’Brien: At the Capitol, which is very exciting. I have not seen it in its renovated glory. So this is going to be fun!

Board: Have you performed at the Capitol before?

O’Brien: I performed at the Capitol in high school for various folk music kind of things. And then WWVA, the Jamboree would do some bluegrass nights in January, probably in the 80s… going there with my brother Tim, doing a set for that. So I haven’t been there since they renovated it and I know that it’s just gorgeous.

It’s an iconic place in my life because it was where I saw… I saw Ray Charles there, Duke Ellington, all the road shows. All the big bands that were doing their 300-night tours.Wheeling was always a stop they made because it was on route 40 and I-70. And there was the Capitol Theater right there that was a wonderful place for them to play so I got to hear a lot of wonderful people there. And now to be able to do this on my own, under my own name with Bob is pretty exciting.

Board: Are you expecting a big crowd?

O’Brien: I hope so! What do you think Bob? It’s not quite right on the heels of Christmas so I hope people can come down for a couple hours of great music.

Thompson: I certainly hope people do come out in Wheeling. It’s a special show, and I’m sure they will enjoy it. 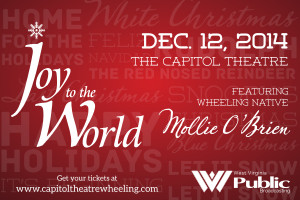 Thompson explains that all three shows will be recorded. From the recordings, an hour’s rundown will be chosen for national radio broadcast next year. The Charleston show will be filmed for television on West Virginia Public Broadcasting, airing 8pm, Sunday, January 21.