Search
Home
Ideas
A seed is planted; a flower grows. A paintbrush is dipped into a bucket; a mural appears. A hand is raised; a project is born. 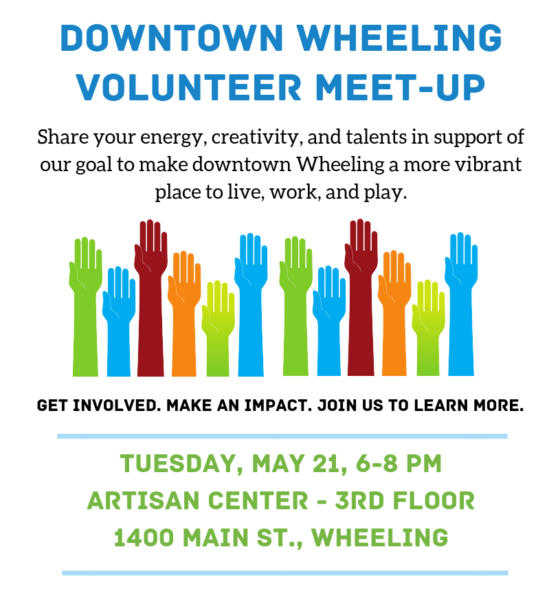 Alex Weld, project manager for Wheeling Heritage, is hoping that her new venture, the Downtown Wheeling Volunteer Meet-Up, plants some seeds … for flowers, for murals, for projects, for improvements.

Will you raise your hand to help?

If so, meet up with like-minded community members from 6-8 p.m. Tuesday, May 21, on the third floor of the Artisan Center.

It was actually a volunteer who helped to plant the seed for this volunteer group.

Weld said she was “churning the idea of bringing this type of committee back” — there have been similar efforts in the past that have attracted large numbers of community volunteers — when Ellen Gano came to her with an interest in helping Wheeling. “She is passionate about getting the community involved and volunteering,” Weld said of Gano, a Wheeling native who recently returned to town from Washington, D.C.

“We want to do very tangible things that are very much volunteer led. … I don’t want this to be me running the show. I want volunteers to feel empowered to say, ‘Hey, here’s what we want to do.’ I can answer questions and direct them to resources,” such as funding to get a project off the ground, she said.

She would love the Main Street District (10th to 23rd streets, and Water, Main, Market and Chapline streets) to be unique, so it doesn’t look like Anytown, U.S.A.

That could mean an expanded Lunchtime Live series, which happens at the Market Plaza throughout the summer. That could mean enhancing First Fridays or jazzing up a little corner of a downtown street. And it could mean new events.

“Small things … beautify downtown; they make it somewhere people want to be. The entire idea is that small, incremental changes build out to make a better downtown. That, to me, is the crux of it.”

As an example, Weld pointed to the Heritage Park & Sculpture Garden, on Main Street between 11th and 12th streets.

That, she noted, was a community-led project that happened years ago. “The people involved in it [who] made it happen still take care of it. What does that say about small changes … that are led by the community? They still have ownership,” she said. 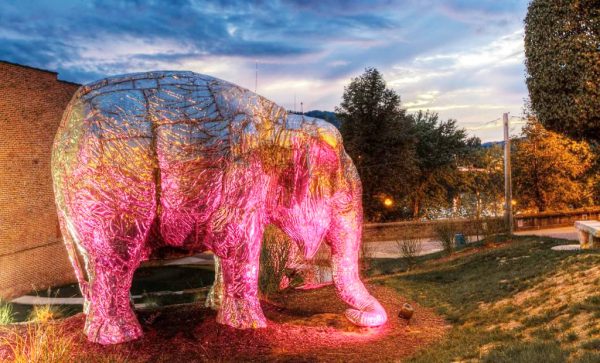 Bobo the Elephant resides in the Heritage Park & Sculpture Garden.

“We don’t want to create more things that need to be maintained, but how great would it be if a committee starts to take a little section of downtown that they want to beautify, and they keep it up? Bring art there, bring flowers, bring other things to jazz it up a bit.

“You can feel empowered to do that … It probably would feel really weird to just go over and yank the weeds out of Heritage Port flower pots, but if you have the support of a committee and the support of an organization, it’s completely fine. … We would make sure that it was fine,” she said.

You don’t have to be an expert to be involved, Weld pointed out.

“We want to be sure everyone feels they have a part and can come and share their ideas. If they don’t have ideas, and they just want to come and lend a hand, they can do that. It doesn’t have to be this big thought-provoking discussion,” she said.

Bring your ideas. Bring your energy. Bring your vision. Lend a hand. Have a say. Come with the willingness to work with other volunteers to make projects happen.

Weld will help you to find a way to make it work, together, for the betterment of downtown Wheeling.

And had one volunteer not come to Weld to ask what she could do, this meeting would not have happened. And if 20 people come to Tuesday’s meeting, imagine the results.

Imagine what seeds could be planted and what flowers may grow.