It was our social network before the public release of the Internet. It mimicked those Park Dances because there were people there from everywhere, and it was the place to go for a first date, every date, and even the last date.

One of 504 locations in 38 states back in 1984, Rax Restaurant, on the corner of Altenheim Avenue and National Road in Woodsdale, was a hideaway for some but the exact opposite for others because on those Friday and Saturday evenings the place was packed. And after they added the “greenhouse extension,” that area was filled, too, although the “solariums” proved a flop at most locations.

It was Rax, where the cream of broccoli soup and those loaded baked potatoes warmed the cold days and nights, and the BBC seemed the most popular sandwich on the menu. BBC? Beef. Bacon. Cheese. As long as the cook poured on the cheese, it usually proved the messiest yet yummiest option on the menu.

And the twisty fries with the BBC Cheese as the condiment? Might not have been popular at all Rax locations, but it was definitely “a thing” in Wheeling as were the salad and food bar where the lettuce was fresh, and the Thousand Island dressing was thick. 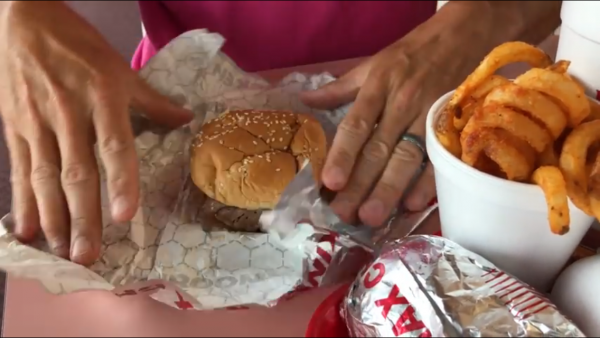 When “Pittsburgh Dad” visited the Rax in Lancaster, Ohio, he opted for the Roast Beef Deluxe and the twisty fries. (Image published with permission from “Pittsburgh Dad”)

When the eatery’s lots were full, the residents of the surrounding neighborhood near Knox Lane suffered because that’s where the overflow traffic would swipe away parking spaces. Even on the busiest of nights, though, lot spots could be found once someone made the decision to venture out to DiCarlo’s in Elm Grove or up to the arcade inside Wilson Lodge.

Instead of surfing from Timeline to Timeline or through the Newsfeed, Rax was a flirty, table-to-table experience, and that’s why the aisles were clogged enough that Wheeling Police Officer Frank Mackey had to clear the lanes – in the name of safety – several times each weekend evening. That’s when, of course, he wasn’t forced to one of the restaurant’s two parking lots because of a fender bender or another fight.

Most of the brawls took place in the east lot closer to Kepner’s Funeral Home, but the bouts didn’t take place as often as some may think, at least during the early to mid-1980s. When they did, allies of one or the other of the brawlers would stop friends from trying to break up the scrum, but no one got in Mackey’s way. That’s because thirty-plus years ago no one brought a knife or gun to a fight at Rax except, of course, for Mackey.

Most often, unless the parking-lot punch fests involved what one person said about the other’s mother, the scuffle most often involved a girl. Truly, it played out so many times the same way:

A movie at the Warwood Twin, and Rax; a cruise through the Festival of Lights, and Rax; a friend’s pool party, and Rax; and especially after football and basketball games, Rax was the place. The colors orange and black, maroon and white, and red, white and blue dominated the dining room, but it wasn’t uncommon to see Rider Purple or Bulldog Blue because, just as those Park Dances did, the social scene at Rax dared East Ohio high schoolers to cross over the Ohio River to see what all the talk was about. 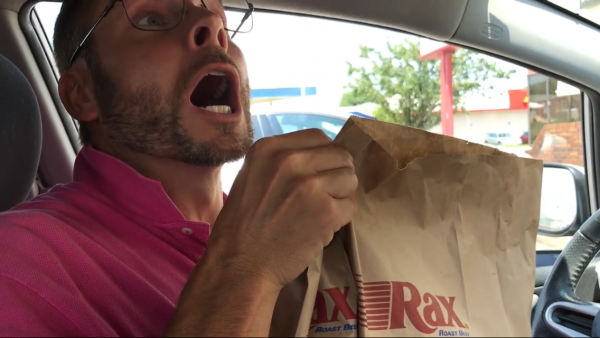 The company was founded in Springfield, Ohio, in 1967, but filed bankruptcy in 1992. Rax continued to exist in Illinois, Kentucky, Ohio, and West Virginia, and in November 1996, Wendy’s International purchased 37 locations and eventually developed them all into Tim Horton’s locations.

Now, “Pittsburgh Dad” traveled into the state of Ohio to visit the Rax in Lancaster, Ohio, a community that is about 32 miles southeast of Columbus. Curt Wootton and Chris Preksta composed and created the video series on YouTube in October 2011 with Preksta directing and Wootton starring as “Pittsburgh Dad.” Since 2016, the short films have been most known for the “3-2-1 Win!” reviews of Pittsburgh Steelers games, but this past August he took his family on the six-hour roundtrip to Rax.

Small bathrooms were inside one of the entries, but a long service counter with three cash registers and a wide-open kitchen area greeted visitors immediately. The ketchup-and-napkin station was between the tall, brick pillar walls that offered entry on both sides into a dining room with four-tops on the wall sides and the chance to push those wooden-topped tables and padded seats into long rows for more and more friends. 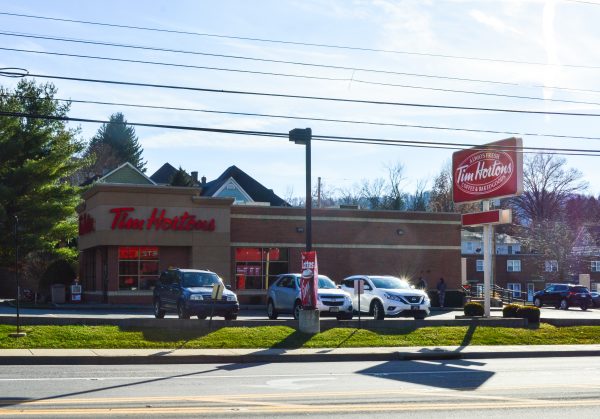 The land on which Rax Restaurant stood for my years along National Road now features a Tim Horton’s. (Photo by Steve Novotney)

But just as Burger Chef was turned into Hardee’s, Baskin-Robbins to a Sheetz, and the former Kentucky Fried Chicken now stands as a Gumby’s Drive-thru, Rax in Wheeling is no more. The corner across from Sheetz was finally transformed in mid-2007 when the structure was demolished in favor of a Tim Horton’s, and the last West Virginia location in Parkersburg was shuttered in 2016.

The same location visited by “Pittsburgh Dad” is the closest to the Friendly City, located 118 miles away at 800 East Main St. in Lancaster. Still on the menu, too, remains all the glory that is the BBC with that thinly sliced Rax roast beef stacked high on a toasted, corn-dusted steak bun, topped with those bacon strips, and loaded with that artery-clogging yet exquisite cheese.

But is it worth a similar road trip?

Well, in “Dad’s” words: “Do you know how rare this is? Finding a Rax is like finding Narnia, or like the Browns going to the Super Bowl … .”