There’s a lot more to it than just the “VROOOOM!!”

The 11th Annual Wheeling Vintage Raceboat Regatta concluded this past Sunday at Heritage Port after more than 30 boats took to the water of the Ohio River, and once again the Joseph family raised thousands of dollars for the Easter Seals Rehabilitation Center on National Road.

“That’s what it has been about from the very beginning,” said co-founder Debbie Joseph. “We are big fans of vintage raceboats, but this event has benefited Easter Seals from the very beginning because of how important it is to the Wheeling area. We may take it for granted because it is here where we live, but there are families who travel many miles for their children to receive treatment here, and there are families that live in Wheeling that have moved here just because this is where Easter Seals operated.

“But this one will likely go down as the best one we have had because there’s really nothing we would change about it,” she said. “Plus, this year is the year when we will surpass the $60,000 mark as far as how much we have been able to contribute to Easter Seals. We won’t know the official numbers for a month or so, but I am very confident we will surpass that dollar amount because before this weekend started we had donated $54,450. We’re just thrilled, and we’re all very, very proud because of what Easter Seals means to so many people.” 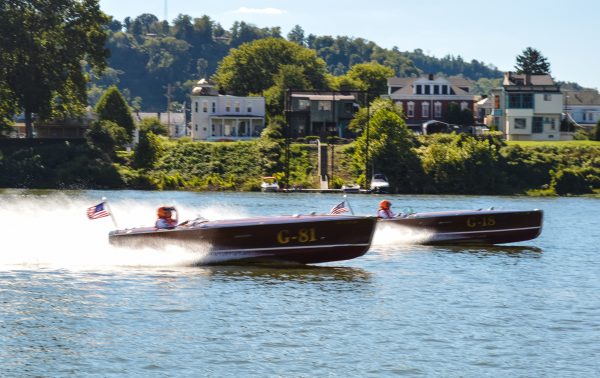 Many different styles of vintage raceboats were on display this past weekend in downtown Wheeling. The G-81 (“Illusion”) and the G-18 (“Compulsion”) are both owned by Bob Mueller from Alton, New Hampshire.

But the Year No. 11 almost didn’t happen, and Joseph explained why.

“If you watch the event, you might notice a guy who is always in the pit area, and that’s because he is our referee. We have to have a referee to have an event like this because he is in charge of letting the boats go once the safety director tells him that everything is ready for a heat to run,” she said. “But he’s also the risk manager, and that means he’s in charge of safety for the entire venue, and it’s a huge position and a very, very important position.

“Our referee this year was Jack Myer, who comes to Wheeling from his home in Louisville, Ky., and about an hour after our Friday night dinner my cell phone rings, and it’s him. He tells me that his girlfriend’s son was in a serious car accident and that he has to go back to Louisville because the boy was in ICU with a broken leg and other injuries,” Joseph continued. “I told him to go, but that left us without a referee, and I can’t run without a referee. But I was able to call a gentlemen who had served as our assistant referee and had come down from Buffalo, and he agreed to serve as our referee so the event could go on.” 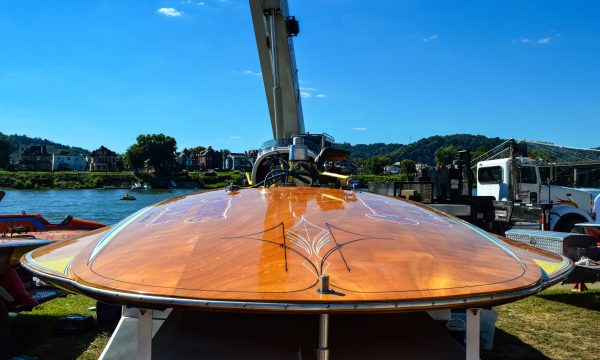 Local residents had the chance to watch more than 30 vintage raceboats on the Ohio River.

That’s the good part of this story, but not the best part.

“On Sunday morning I was in the county command center that Lou Vargo graciously lent us, and I look out the window and there’s Jack Myer. He drove back to Wheeling from Louisville, so that means he drove to Wheeling on Friday, back to Louisville Friday night, and then back to Wheeling in the middle of Saturday night so he could make sure he would make it back in time,” Joseph detailed. “It was such an amazing thing, and no one would really know that we went through that situation.

“It was really a scary time for all of us connected to the event because we really didn’t know if we would be able to secure another referee so we could have the event in the first place,” she said. “Our committee works so very hard to do what we’re able to do, and my husband and I may be the front people for the regatta, but I always defer any compliments that we receive to the committee. That’s because it is truly a large group of people who have their hands in this and who make it work the way it does. Their hearts are into this and that’s why we can donate what we do to Easter Seals each year.” 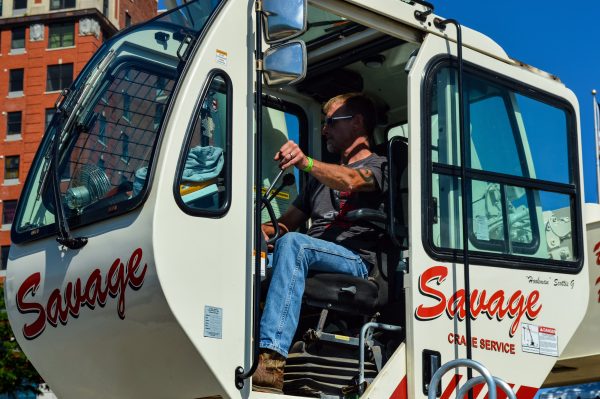 Savage Construction donates three cranes and operators for the annual weekend. Here, Scott Graham prepares to lift one of the vintage raceboats from the Ohio River.

The co-founder also reported that because of the ideal weather conditions during the two-day event all heats ran as scheduled, and no injuries were treated. One boat, “Compulsion,” did flip over during an exhibition on Saturday, but thanks to volunteers and first responders the watercraft was saved from sinking to the bottom of the Ohio River.

“The kind of boat that flipped is called a ‘Gold Cup’ boat, and they were the very first raceboats,” Joseph reported. “The first ones were built back in the 1920s, but the boats that were here were actually built in the early 2000s, and the owners have been promising me for a number of years that they would bring them down here from New Hampshire.

“What happened was that the two boats were running together, but they usually run on a lake near where they are from, and that water is much different from the Ohio River. On the river the water reacts differently from the way it does on a lake when you have the boats on them, and the boat that flipped over got caught in the wake of the first boat, and it gradually flipped over. The two people in the boat were ejected from the boat, and they were rescued, and then the first responders saved the boat that flipped. So our safety team deserves a lot of credit. And the Wheeling Fire Department? What a class act those people are.” 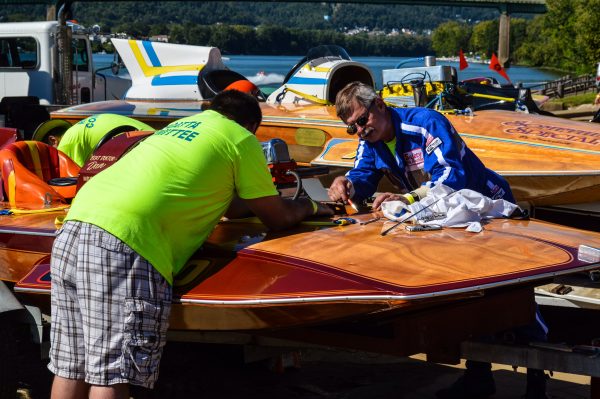 Staff from the Oglebay Good Zoo visited the Wheeling Vintage Raceboat Regatta on Saturday and Sunday, and local children had the chance to interact with some of the animals that reside at the facility.

“We had a very nice crowd of parents and their children visiting the animals, and I believe the sound of the boats may have freaked out a couple of them,” Joseph said. “I was afraid that was going to happen, but I didn’t see anyone running around after an animal so I believe all was OK in the end.

“That really seemed to be a big hit with a lot of people, and I think having the zoo animals near the Janie S. Altmeyer Playground was a great idea,” she said. “That is definitely something we would love to continue doing.”

Also on Saturday two local bands were featured during the event’s daily break in the early afternoon and at the end of the action. New Age Adenas performed from Noon-1:30 p.m., and the Joe Zelek Band entertained at the end of the day’s final exhibition heat. 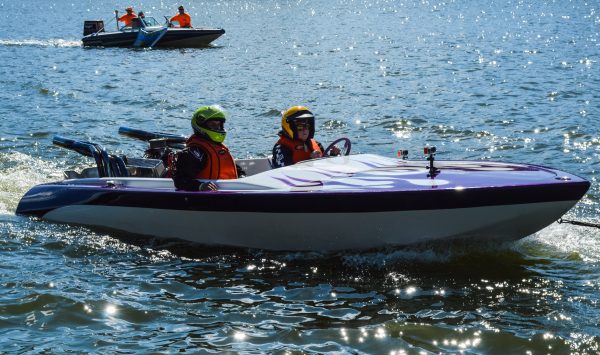 The annual regatta attracts many boating enthusiasts from throughout the United States. Here Leia Glasgow and her husband Jay take to the river during the annual event.

“Joe Zelek was amazing, and the New Age Adenas were absolutely wonderful. They put on great, great shows,” Joseph said. “The Health Plan brought that music lineup to us, and from the moment we saw it, we were excited for both bands to play for our crowds.

“People waited for Joe and his band after all of the heats were run, and the New Age Adenas just seemed perfect for our crowd because of the kind of music they play,” she said. “That is the kind of entertainment we hope to offer every year for those who attend, and this year set a pretty high bar for us in the future.”

In addition to the 43 committee members, the Wheeling Vintage Raceboat Regatta is supported by a number of different sponsors, including the title sponsor, Wesbanco Bank. Other primary supporters include the northern delegation of the West Virginia Legislature, Savage Crane and Construction, Merco Marine, Family Medical Supply, The Health Plan, the Ohio County Commission, and Wheeling Volkswagen Subaru. 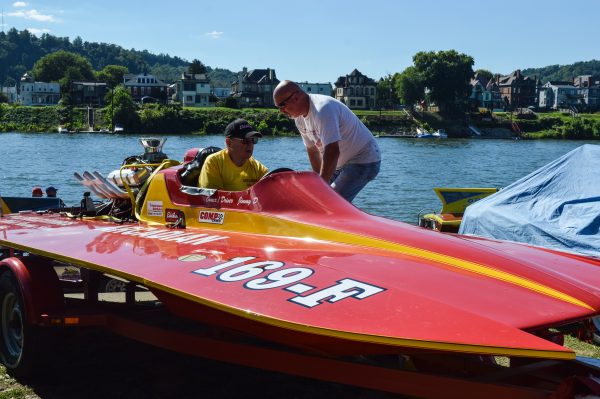 One of the many vintage raceboats that traveled to the Friendly City for the Labor Day weekend. The F-169 is, “Arcadian” and is owned by Rob Kaufman of Salem, Ohio.

“Our sponsors are the financial heart of what we do because they give us the money to get us going to make sure that this continues here at Heritage Port,” Joseph said. “Without them this event wouldn’t happen, so they all deserve a lot of credit, and it’s my hope local residents show their appreciation by patronizing those businesses.

“And the funds that were raised so we can make that annual contribution to Easter Seals also were generated by the fees the boat owners pay to be there, the fees paid by the vendors, and also by the basket raffles and the 50-50 raffles,” she continued. “So everyone who visited this year’s event and participated in one of the raffles helped us get over that $60,000 milestone, and we appreciated that very, very much.” 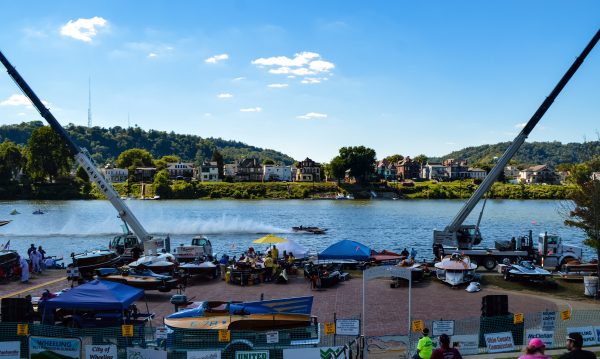 Those in attendance at this year’s event had the opportunity to see history in motion.

“We will meet in a couple of weeks for our wrap-up-and-get-started-on-next meeting,” she said. “After that we will meet again sometime in the winter so we can start putting everything together for Labor Day 2017. There are so many aspects to putting this event on that it takes many meetings to make sure we have everything set, and that everyone is on the same page.

“We’ll review the things that we want to do differently, and we’ll also consider new ideas, as well,” Joseph added. “It really does take that number of people to bring this event to Heritage Port because there are a lot of behind-the-scenes things that most people do not realize we deal with. But because of the dedication of our committee members, no matter what the issues may be, it gets taken care of so we can assure those in attendance see exactly what they came to see.”