Reinstating Pluto as a Planet

The July 12, 2015 article about Pluto was the start of a four-part series (Is Pluto a Planet?). The goal of the first article was the hope of rekindling a scientific and public conversation of “what a planet is or is not”. This renewed conversation about planetary definitions was additionally sparked by the unique and timely event of NASA’s New Horizons spacecraft flyby through the Pluto System on July 14, 2015. In part I of this series, the history of Pluto’s discovery was outlined with reference to the current definition of what a planet is by the August 24, 2006 vote of the astronomers attending the International Astronomical Unions (IAU) General Assembly meeting in Prague. Additionally, Part I introduced some discussion topics and ideas to stimulate conversation between you and your friends and family about what is or is not a planet.
The August 2006 meeting of the International Astronomical Union (IAU), attempted to define the idea of what a Planet is while also purposely demoting Pluto into a new category of smaller astronomical objects with the name “Dwarf Planet”. The IAU’s definition of the idea of a planet is rather complicated, vague, and did not speak to the many planet-sized objects (exoplanets) being discovered beyond the Solar System (nearly 200 as of August 2006). Many astronomers disagreed with the 2006 IAU planetary definition. Nine years later there is still much disagreement and debate on what is or is not a planet. As long as Pluto was a blurry smudge a few pixels across in even the Hubble Space Telescope, there was really no big deal demoting Pluto from planetary status. 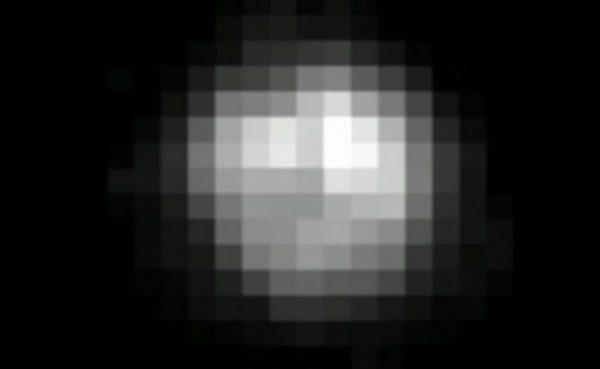 Above is the best image of Pluto taken by the Hubble Space Telescope three months (April 2015) before the flyby of NASA’s New Horizons spacecraft on July 14, 2015.
Here is the three-part definition from the August 24, 2006 International Astronomical Union (IAU) Resolution 5A-Def. of “Planet”. A Planet is a celestial body that:

(a) is in orbit around the Sun,

(b) has sufficient mass for its self-gravity to overcome rigid body forces so it assumes a hydrostatic equilibrium (nearly round) shape, and

(c) has cleared the neighborhood around its orbit
For now, let’s leave it to the reader to find the numerous “problems”, i.e., logical inconsistencies and scientific flaws inherent in each of the three parts of this Planetary definition. The author will outline these “problems” in detail in Part III of this series of Pluto related articles to be published by WeeLunk in mid-September, 2015.
Images sent back from the New Horizons spacecraft in mid-July, 2015 revealed Pluto and the system of five moons to be far more interesting than was imagined. Pluto’s surface was expected to be an inactive ancient cratered topography resembling a moonscape, instead Pluto’s surface was found to have been active during the last 2% of its age, smoothing out huge regions of its surface and producing mountain ranges of ice that rival the Rocky Mountains in scale. Charon, Pluto’s largest moon, was found to have darkened poles and a possible rift valley larger than the Grand Canyon. Pluto’s thin atmosphere was found to be thicker than expected and slowly being replenished. 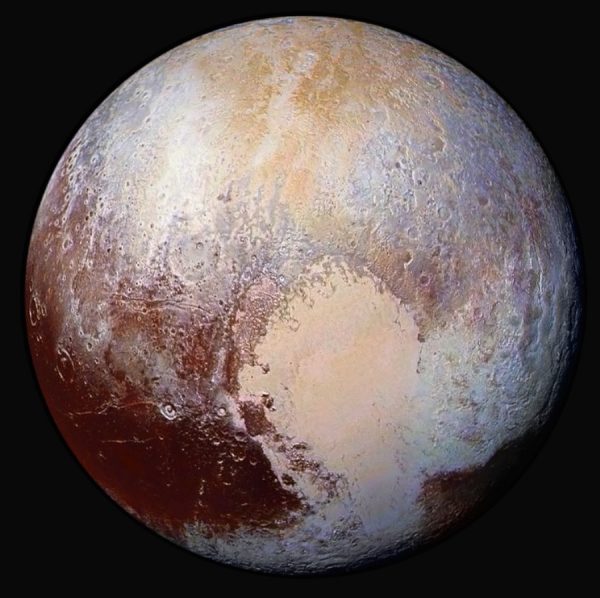 Above is the best image of Pluto so far from NASA’s New Horizons spacecraft as of July, 2015 – stand by for additional high-definition images as they trickle back from New Horizons over next 15 months. 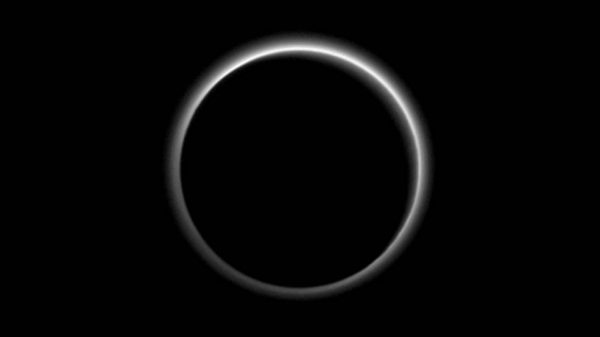 Above is a backlit image of Pluto’s atmosphere
In the absence of a better definition for what a planet is, the SMART-Center formed a working group several years ago to better define the term “Planet”. This SMART-Center working group called – the “BluePrint Team” is a citizen science group working toward creating an easy / simple definition of what a planet is and is not. Using over eight years of research, attending and presenting at numerous astronomical conferences and educational workshops, and listening to the feedback from kids and adults at our co-sponsored StarWatches, the BluePrint Team has put forth a simple definition of a Planet: A Planet is a celestial object that is not massive enough to be a star and has a minimum diameter equal to ten million “waves”.
In short, the SMART-Center working group – the “BluePrint Team” solved the problem of what is or is not a planet by simply drawing a line in the sand and saying “any celestial object not massive enough to become a star and has a diameter bigger than this (10 million waves) is a Planet, anything smaller is not a planet.” The BluePrint Team saw this as a common style solution to a common problem. To ride a ride at an amusement park, there is often a scale kids must stand next to “must be this tall to ride” before entering the ride. To vote you must be 18 years old or older, to be President of the United States you must be 35 years old. These examples are numerous and extensive in our society.

The “wave” is the BluePrint Team’s new unit of length, defined as the length of the wavelength of a universal radio frequency of Hydrogen, the most abundant and simplest element in the universe. Hydrogen found in the space between the stars gives off a special radio wave called the Hydrogen Line. The (wave)length of the Hydrogen Line radio wave is 21.106 cm (8.309 inches). The abbreviation of “wave” is “wv”. By what the BluePrint Team calls a happy accident, “wv” is also the abbreviation for the state of West Virginia.

Using this new definition of a Planet, we can say that any object that is not massive enough to be a star and has a diameter equal to or larger than 10 MegaWaves (or 10 Mwv or 2,110.6 km or 1,311.7 miles) is defined as a planet. This planetary definition is simple and straightforward, allowing no mistake when asking if a celestial object is a planet or not.
The current eight planets: Mercury, Venus, Earth, Mars, Jupiter, Saturn, Uranus, and Neptune are all much larger that 10 Mwv so they continue to remain as Planets by this new definition. However – Pluto is a rather small celestial object. Now, you may ask, where does Pluto fall according to the revised BluePrint Team’s definition of a Planet? The presently accepted diameter of Pluto as of July 13, 2015 from the new data from NASA’s New Horizon spacecraft flyby is 2,370 km (1,473 miles) or about 11.23 Mwv. Therefore, Pluto, by this new planetary definition is just slightly larger than the minimum diameter of a planet, and thus would reinstate Pluto as a planet, a very small planet.

By popular citizen-scientist request, the SMART Centre Market will host an additional “Pluto-Talk” at 6:00 pm to 7:00 pm on September 23, 2015. Updates on Pluto and the Pluto system of five moons will be discussed. There will be plenty of opportunity for questions and comments from the audience before we adjourn outside to a telescopic StarWatch to see the Moon, Saturn, and stars.
The New Horizons spacecraft successfully made its fly through of the Pluto system this summer on July 14, 2015, in celebration SMART Centre Market hosted Planet Pluto Camp (July 13/14) for 4th to 8th graders and held the Planet Pluto Public Party and StarWatch on the evening of July 14. Visit the website, http://pluto.jhuapl.edu/ for updates, new Pluto images and data, and to watch the post-Pluto Flyby Countdown Clock as New Horizons continues on its voyage of discovery to its next destination – a small Kuiper Belt Object, in several years.

Robert E. Strong lives in Wheeling, West Virginia with his wife of 20 years, Libby. They co-own the SMART Centre Market – the interactive science store in Wheeling’s historic Centre Market district. Additionally, they run the SMART-Center, a 501(c)(3) non-profit informal science center and programming that has served the area since 1994.
Robert is an avid amateur astronomer that works with the ASTROLABE Astronomy Club, Near Earth Object Foundation, and SMART-Center to bring over 40 public annual StarWatch events to the area. Robert heads up the SMART-Center’s BluePrint Working Group to create a better public understanding of our Universe and develop an improved 21st century nomenclature set for celestial objects in the Solar System and closest star systems.