It was the first bridge to span the Ohio River, and it is the most historic bridge in the entire country to many, and that’s because of the path it afforded to the Gateway to the West and because an average of 55,000 motorists split the city of Wheeling each day while traveling Interstate 70.

That is why officials of the West Virginia Division of Highways have once again delayed the beautification and renovation project on the Wheeling Suspension Bridge, according to DOH District Six chief Gus Suwaid. The span, which was the longest suspension bridge in the world from 1849 to 1851, was designed by Charles Ellet Jr. The bridge opened in 1849, was badly damaged during a wind storm in May 1854, and was quickly redesigned and reopened three months later.

Presidents have crossed it, and so have circus elephants. Brave men used to dive from it each Fourth of July, and legend has it that escaping Confederate soldiers would jump to their freedom – or to their death – from it. The Wheeling Suspension Bridge is older than the state itself, and it has stood as a stalwart landmark during the prosperity that population brings, the decline the citizens of a Rust Belt city feel intimately, and the ongoing resuscitation of the Friendly City. 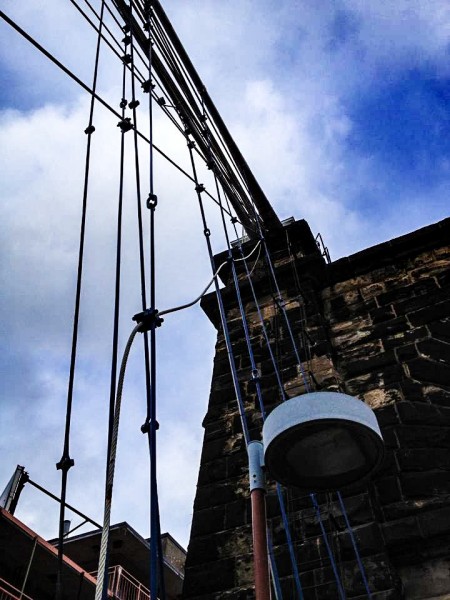 A cable on the Wheeling Suspension Bridge snapped in March 2013, closing the span for several months. While no specific cause was cited by officials of the W.Va. Division of Highways, the fact that an average of 5,500 motorists use it daily is one reason why structural work will be performed next year.

“The simple fact that it is so historic makes it a very high priority with everyone involved,” said Suwaid. “This $8 million project was scheduled for this year, but it was delayed again until 2016 because of revisions that have been made to the project.

“And I am sure that funding may also be an element,” he said. “But in the end, working on the Suspension Bridge is something we all take very seriously.”

Suwaid explained that twofold project comprises beautification and structural improvement. Initially, the DOH announced the facelift work, but after a cable snapped in March 2013, officials discovered the need for preservation.

“There was a very hard look that was taken at the Suspension Bridge while the work was being done to repair it,” he said. “That’s why the decision was made to expand the scope of the project. The bridge needs some structural work to preserve it for years to come.

“We do know that the electrical and lighting systems will be completely overhauled,” Suwaid continued. “We’re also aware of all the vandalism that’s taken place since the last renovation project, so keeping the lighting more protected is also part of the process.”

Bridge Department chief Pat Gurrera could not confirm what color scheme would be adopted for the painting portion of the project, but he said the red, white, and blue theme probably would be repeated because of the positive reviews the DOH received following the last restoration project that began in 1999 at a cost of $5 million.

“The Suspension Bridge was last inspected in May 2014, and it is always being looked at by everyone,” Gurrera said. “There are still a lot of decisions being made and the final plan will likely not be finalized until the final inspection is made.” 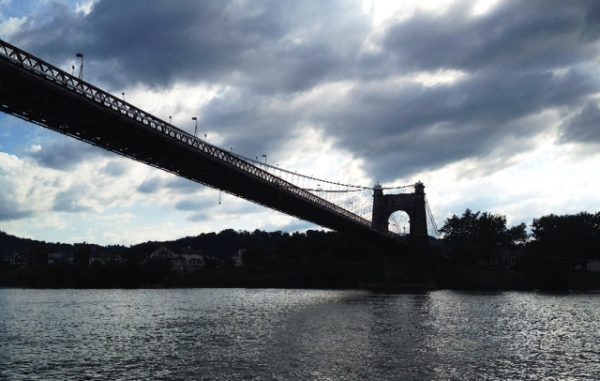 The Wheeling Suspension Bridge permitted the continued growth of National Road after opening in the mid-1800s.

Often, especially on the evenings when sporting events are staged at Wheeling Island Stadium, the 50-foot interval rule and the two-ton weight limit on the Suspension Bridge are ignored, and Wheeling Police officers are frequently dispatched to both sides of the span because a vehicle too tall to pass through the height-limit barriers can become stuck. The list of offenders includes operators of box trucks, school buses, and even semi-tractor trailers, but today even a vehicle like a Cadillac Escalade weighs in above the weight limit.

“It’s not an everyday call we receive, but I can tell you that we receive far too many of them throughout the year,” said Wheeling Police Chief Shawn Schwertfeger. “When it happens, the driver gets cited, but that’s really all we can do.”

Suwaid said updated restrictions are under consideration, but enforcement is the uncontrollable variable.

“The signage is clearly posted for the interval rule and the weight limit, and the height barriers are very strong,” he said. “I just don’t know if people are aware of the weight of the vehicles we are driving today, so that’s one of a lot of factors included in the decision-making process.”

Former DOH District 6 chief engineer Dan Sikora confirmed during a November meeting with officials from Wheeling, Ohio County, and the state that the Suspension Bridge would be re-opened to vehicular traffic once the extensive project is complete.

“I can tell that this kind of money would not be spent on this bridge if it were to be closing to traffic at the end of it,” he said. “The Suspension Bridge is a major artery for a lot of people in this area, so this work will keep it open until the time arrives for the next one. That’s the way it works.”

Suwaid was recently named to his new position, and so was Gurrera following the recent retirement of former bridge chief Dave Sada. It is transition time with the DOH District 6 Office, and the primary reasons are the better-paying companies in the gas and oil business. Sikora explained during the same meeting that CDL-licensed drivers employed by the DOH earn about $10.50 per hour on the job, but after two years of experience many of those employees have opted for jobs in similar positions with drilling, fracking, water, and pipeline companies.

“All they need is the two years of experience that the gas companies require, and as long as they pass the drug test, they get hired,” Sikora explained. “It’s like we’ve become the training ground for those industries, but we also have a lot of other unfilled positions right now.”

After his first three weeks on the job, Suwaid confirms the angst.

“We have lost a lot of people who were in key positions. That’s our reality right now,” he said. “So while we managing all of the projects that are ongoing and getting ready for the ones to come, we are also hiring and training new employees.

“The condition of our infrastructure is a countrywide issue, and I know the state of West Virginia is going after every dollar possible so we can address the situation in our state,” Suwaid said. “Proactive decisions are being made about the roads and bridges in our district, and that includes the future project on the Suspension Bridge.” 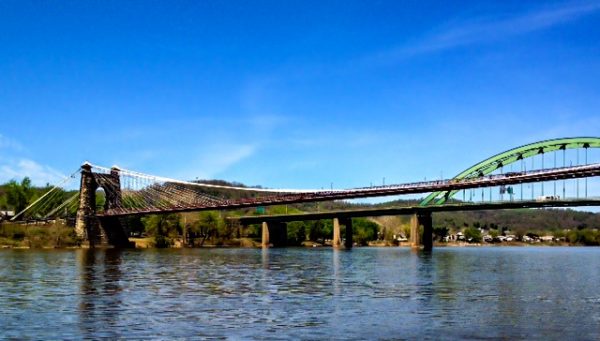 Today, the Wheeling Suspension Bridge – the first structure to span the Ohio River – rests adjacent to the Fort Henry Bridge and Interstate 70. The DOH has a 2-ton weight limit in place, as well as a 50-foot interval rule.