Search
Home
Essays
No matter what holiday we celebrate, our yearly traditions anchor us. They keep us grounded in times of joy and chaos, both of which flow abundantly in December.

Christmas traditions in my family never varied much. We had a family dinner on Christmas Eve, went to church, opened one present … blah blah blah. Not original but reliable. 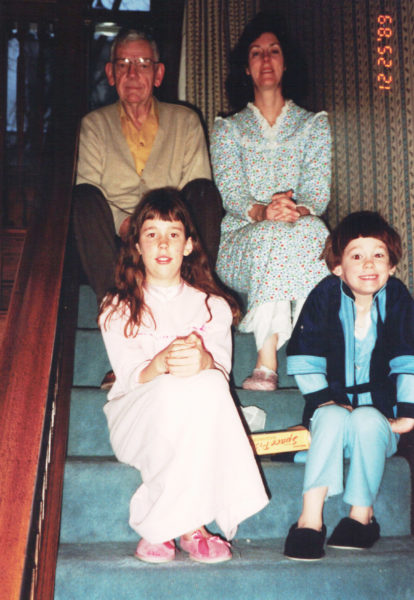 The Jackson family waits on the stairs on Christmas morning in 1989.

I knew my cousins would come, I knew Mom would buy sticky buns, and I knew my dad would make us sit on the stairs on Christmas morning while he and my grandfather took photos for 15 minutes.

The location seemed to be chosen with sadistic precision, as my brother and I could peek into the living room and see hints of our toys sticking out of stockings. But we were required to hold still as they took vertical shots and horizontal shots, shots with the dogs and without the dogs. With Pop and Mom. With Mom and Dad. With all the kids.  With none of the kids. With a dog snatching a sticky bun. With a dog wearing reindeer antlers.

When Pop developed the photos in February, none ever depicted a cheery, if anxious, family of Jacksons ready to celebrate the joy of Christmas morning. Instead, we got 24 prints of my grandfather’s enormous finger covering the lens. If you were lucky, you saw half of my mom in her robe, a kid’s elbow and a dog’s ear.

Long before we ever made it to the stairs, though, I would have been working hard at my own tradition. In the early years, my grandparents would spend the night so as to be there on Christmas morning. The problem was that “old people” had no empathy for a young child’s desire to tackle Christmas morning like the Kool-Aid man smashing through a wall. They wanted to sleep in.

Thus, at 5:30 a.m., I began my annual campaign of annoyance designed to roust from their slumber anyone over the ancient age of 30. The centerpieces of this effort were the toilets. In the early 1980s, before water conservation and “low flow,” those puppies flushed with an echoing boom. It was like the Concorde taking off in the bathroom. Ba-woosh!

Over and over, I flushed. Every two minutes. I went from toilet to toilet, crashing into shelves on the way and chucking shampoo bottles against the wall like a poltergeist. Anything I could throw or knock over went flying in a symphony of sleep-shattering discord. Ba-woosh! Alas, my efforts were rarely successful.

These days, sleeping in has become the honored tradition. Moreover, I’ve learned that partnered adults have to select and blend their respective family’s holiday traditions carefully.

For example, Shawn’s family always got pizza on Christmas Eve, while mine ate ham and roast turkey on my grandmother’s china. That one was a pretty easy choice (thank you, DiCarlo’s), but the Christmas tree took a little more compromise. Shawn was of a mind simply to bring it down from the attic and plug it in.

That didn’t fly with me. If it wasn’t oozing sap and crawling with baby praying mantises, it didn’t count. Moreover, the tree had to be cut in a muddy field on the sleetiest day of the year and then absent-mindedly driven into the garage, still tied to the top of the car, and slammed into the garage door mechanism with a sickening bang.

Once removed, it had to be erected through a series of prickly, painstaking adjustments in which it was ooched left, shoved right, rotated 143 degrees counterclockwise and 27 degrees back until it showed off its most presentable side. Then it would be decorated with series lights from the 1960s and displayed in its glory until a dog or cat toppled it and shattered the antique family bulbs.

That’s how you do a Christmas tree. 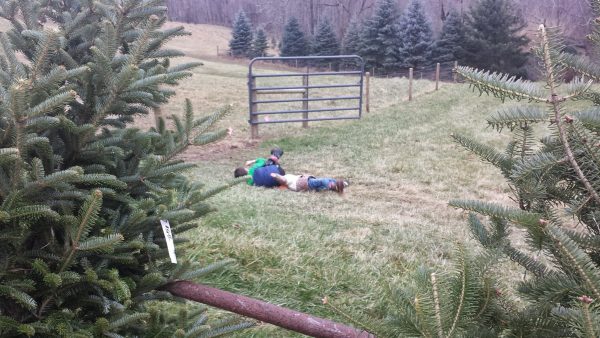 The Roberts boys wrestle in the mud at the Christmas tree farm.

Not every tradition is a keeper, though. Consider that horrible little Elf on the Shelf. According to the book written by the elf’s creator (a Dr. Frankenstein if ever there were one), the elf arrives on Dec. 1 and hangs around until Christmas Eve to watch the children and report their behavior to Santa. The kids aren’t allowed to touch their elf — ours was named Hoos Foos — or its magic will disappear, and the elf chooses a new observation spot each night. These elves are the Diane Fosseys of Christmas, studying their ape-like subjects in silence.

Quite frankly, the elf sucks. Hoos Foos had to move to his new hiding place before the kids woke up the next morning, necessitating not one but three reminder alarms on my phone. The first one said, “Move the elf.” The second one, set for an hour later, said, “Seriously, just move the elf.” The third alarm, set for 5:45 a.m. the next morning, said, “Get your lazy butt out of bed and move the elf, you freaking Christmas deadbeat.”

The kicker was that we did it to ourselves. What a fun tradition, we thought at first. Then, we got the little jerk home and realized, holy crap, we have to move this thing every single night. The worst part is that there are parents out there who really get into it. The kids come down and there he is, sunbathing on a piece of rye toast with a tiny margarita in his hand. Maybe he’s making a snow angel out of rainbow sprinkles or rubbing Barbie’s shoulders with a bawdy grin on his face. Creep.

I never went that far. On a typical Monday, Hoos Foos was leaning on a plant. Tuesday, he was lying on the mixer. Wednesday, he was stuffed headlong into the Christmas tree. By Thursday, he’d fallen on the ground and the dog was chewing his face. 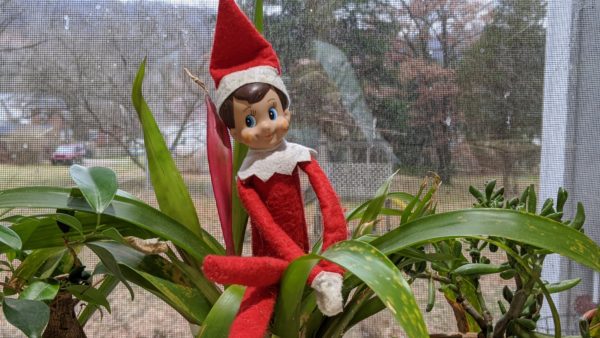 The elf, Hoos Foos, is planted in various locations at the Roberts’ home.

The elf tradition is time-consuming, and heaven help you if you forget to move him. The kids come downstairs in the morning like heat-seeking missiles, and if they find that elf in the same place he was yesterday, all hell breaks loose. The elf didn’t move, Mom! What’s wrong with him? At first, you try to be sincere. He might have needed a night off, sweetie. Perhaps he just texted Santa instead.

But as the weeks and years wear on — because you’re going to be doing this elf baloney for a long time, especially if you have more than one kid — you stop caring how realistic your explanations sound.

“Look, maybe Hoos Foos is tired. He works all the time, and his adrenal glands are shot, and he pulled his left rhomboid hauling the Christmas tree in. Can you give him a break? Maybe he just wants to sit there after you go to bed and stare at the wall with a rum and tonic in his hand and ask himself what the hell happened to Christmas.”

Inevitably, of course, all traditions change with the shifting of generations. My sweet grandfather and his photo-bombing finger are gone, and my kids refuse to sit on the stairs and endure pictures anyway. My husband and I have compromised on the handling of our Christmas tree: he chucks it into the stand and watches the Steelers while I pore over every branch and mutter to myself about ornament aesthetics and pine sap. 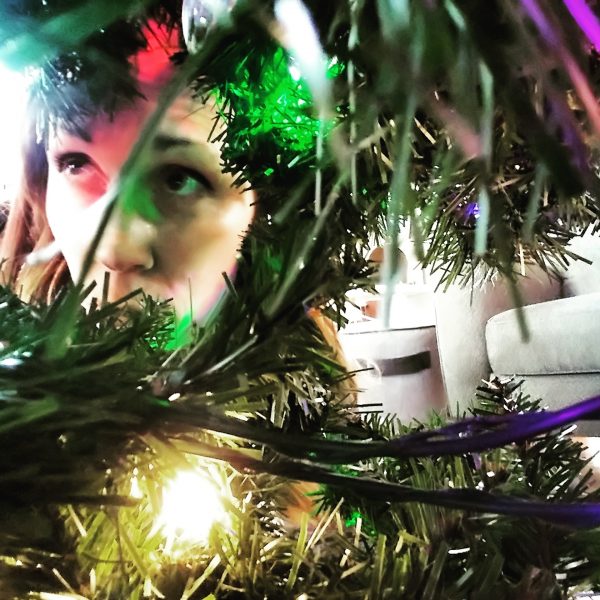 The author searches for a little Christmas sanity … and pine sap.

As for the Elf on the Shelf, the magic dried up as my kids grew. After a year or two of questions like, “Didn’t we buy Hoos Foos at the store?” and “Why does he have a tag on his butt?” Benjamin finally asked me, point-blank, if I was the one moving the elf.

He was quiet as he took it in, and then irritation spread across his young face.

“Oh great,” he said. “All this time I’ve been talking to a hunk of plastic!”

Later that night, I found Hoos Foos in the tub, manhandled and discarded as roughly as any other toy. The tradition had come to an end.

• Laura Jackson Roberts is an environmental writer and humorist in Wheeling, West Virginia. She holds an MFA in creative writing from Chatham University and serves as the Northern Panhandle representative of West Virginia Writers. Her hobbies include hiking, travel and rescuing homeless dogs. Visit her at laurajacksonroberts.com.