When Shawn woke me up the other night at 1 a.m., I’d been in the middle of a dream about a raspberry cheesecake. One moment I was reaching for a fork, and the next, a jittery man stood over me.

“Get up!” he hissed. And then he disappeared.

I sleep with ointment in my eyes because they’re chronically dry, so I was half-blind as I stumbled out of bed. I fell into the dog, I squished the cat. Everything looked blurry, but when I stepped out into the hallway, I saw Shawn clutching a broom. And in the summer in Wheeling, West Virginia, that can mean only one thing. 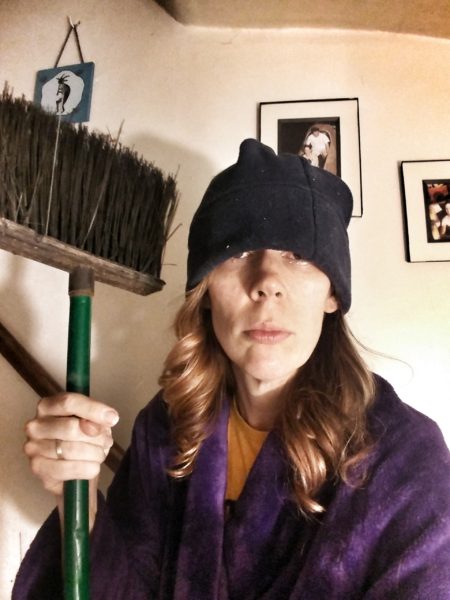 If you live in the Ohio Valley, you’ve probably had a bat in your house at least once. Myotis lucifugus, the little brown bat, commonly roosts in eaves, dormers and holes in roofs. At night, they follow cool air currents outside to begin their hunting activities (one bat can eat 1,000 mosquitos an hour, making them the most valuable tool we have against mosquito-borne disease). But when we turn on our air conditioners, we create false drafts. Sometimes, they get confused — often, it’s a baby bat — and follow the wrong path back into the house. This is why you end up under the kitchen table with a laundry basket on your head every June.

Bats are federally protected, so while you can dispatch a lone bat for rabies testing, you can’t go on a killing spree. If you wake to a bat in your bedroom, there’s a chance, however remote, that you’ve been bitten, and you’re advised to kill it and have it tested by the health department. But most of us try our best to usher them safely out a door or window, and this was our plan the other night. We value the bat for its ecological importance. At least, we do during the daylight hours.

Shawn and I have done this dance before. When we said our vows, we acknowledged better and worse, good health and bad, and agreed to love each other with or without money. But nobody said a damn thing about bats, and in hindsight, I think the minister should have. We should have vowed to love each other in the presence of flying mammals, through squeaky, pants-soiling terror at midnight, for rabies shots or not, with or without a tennis racket. Then, at least, we would have known what we were getting into in this old house of ours.

We first met in the development office at West Liberty University 16 years ago, and Shawn pretended he was totally cool with bats. It turns out he was lying through his teeth to impress me. He’s terrified of them. The color drains from his face, and he gets jumpy. He can’t even watch Scooby Doo because they’re always flapping around in the creepy mansions.

When a bat appears, we launch into a choreographed routine in which I scream, and Shawn hides. More than once I’ve found him flat on the floor with a tennis racket over his face, hatching a plan to release venomous snakes into the roof so the problem “takes care of itself naturally.”

We were fresh out of cobras the other night, so we knew we had to deal with the intruder on our own. We huddled in the kitchen, trying to pump ourselves up. Shawn had no plan other than to march in and wave the broom around, but this was a big step for him.

We dropped to our hands and knees and split up. I crawled into the foyer and peered into the living room. There the beast lurked, and it was a whopper. I’m no expert but I’d estimate a 42-inch wingspan. It swooped in large, frenetic circles. Our overweight cat, Fur Pig, sat on the floor and watched with bloated disinterest.

Shawn approached from the opposite direction. He lurked in the doorway, watching it flutter. When it came near, he sprang into the center of the room. Recalling his years of martial arts training, he assumed a ninja stance and swung the broom like a bo staff. But he didn’t hit the bat; he hit the ceiling fan. The blades spun wildly, and the pull chain whipped around the motor as the entire contraption rocked back and forth and threatened to crash to the floor. 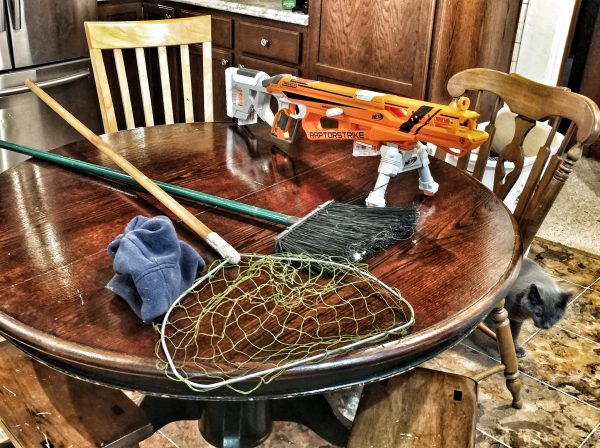 Meanwhile, though I still couldn’t see, I grabbed the first long object I could find from the broom closet. Using every ounce of adrenaline, I crawled into the living room. I knew if I could study the bat’s flight pattern, I could probably take an accurate swat at just the right moment and knock it to the floor. Then we could toss it outside in a towel.

The bat made several passes around me, and each time I feared I’d urinate on the rug. But then I remembered my kids, sleeping peacefully upstairs, and I knew I had to be brave. I clutched my weapon and rose to my feet, still hunched low, but ready to swing. The bat seemed to know the fight was on and came at me.

“Aaaarrgh!” I roared and lashed the air above my head with my weapon. I refused to let panic rule the day. Courage washed through my veins — I could feel it. I had the strength of a she-bear and the determination of a Viking. This bat was getting the swift boot.

Something touched my ear. That was all it took. I threw myself down on the carpet, dropping my club to the wayside. It turns out I’d been brandishing a lime green pool noddle. The limp end had drooped down and brushed the side of my head, and I’d mistaken its Styrofoam caress for a bat attack run. My fortitude now diminished, I army-crawled under Shawn’s desk. Each time the black figure made a pass, I swatted at it from seven feet below with my flaccid flotation device.

In the other room, Shawn had propped the front door open for an escape route. The bat, of course, had no idea where it was supposed to go. So, to help its chances, Shawn opened the back door, too. From under the furniture, I disagreed with this course of action and emerged to close it. He opened it. I closed it.

Him: “Why do you keep closing the back door?”

Me: “Why are you opening two at the same time?”

Him: “To increase the chances of getting it out.”

Me: “You open one door and watch carefully so you can confirm that it leaves.”

Suddenly, it was quiet. We’d lost track of the invader during our discussion. Shawn stood in the living room, his broom aloft, still as a statue. I pulled my hat down, and we waited.

Silence. We’d lost it. I hate it when bats disappear because it means they’ve found a hiding place and gone to sleep. Knowing there’s a bat in your house but not knowing where it lurks or when it will pop out is a special kind of hell. One minute you’re making a turkey sandwich, and the next, a stray floater in your eye sends you headlong into the potato bin. You find yourself walking around with a ski mask and a wooden ladle, just in case.

It was a long 24 hours during which Shawn and the boys assembled an arsenal of Nerf guns, fishing nets and ski gear. They spent the day planning their attack and running practice drills. At 10 p.m., when the bat emerged, they came storming out of their rooms, locked, loaded and terrified.

In the end, of course, nobody came within five feet of the bat with their foam darts. They shot my china cabinet. They shot my curtains. Somebody took out an Ecuadorian wall hanging, and somebody else grazed the dog’s ear. Eventually, they switched to a fishing net, which turned out to be a more effective tool than the Zombie Strike Blaster.

Because a case of rabies had just been found in Woodsdale, the health department encouraged us to turn the bat over for testing. It was a sad ending that evoked many tears from my kids and a deep sense of regret from me. When all was said and done, we remembered the little stinker was an accidental intruder who took an unfortunate wrong turn and paid the ultimate price. The rabies test came back negative, thankfully.

But I suspect I’m not alone, crouching there in my snowsuit with my pool noodle. These critters are intimidating. Perhaps it’s time to embrace our inner girly-shrieks. Let’s admit why we’re really investing in a badminton set and sleeping outside in the Kia. Own your terror, Ohio Valley. It’s OK to dive under furniture. It’s OK to don hockey masks and laundry-baskets and belly-crawl across the floor. It’s OK to scream.