Shortly after Santa Claus rolls through the streets of downtown Wheeling this evening, it becomes about the pizza box.

“After the parade is over and most of the people have left the downtown Wheeling area, most of the committee members gather at DiCarlo’s on Main Street,” explained Bill Bryson, the chair of Wheeling Chamber of Commerce’s parade sub-committee. “While we’re there, I always grab a pizza box, and that’s when we hash out the evening. We get input from everyone who is there, and we’re very honest with ourselves because it’s always our goal to make the next year better.

“But after the parade it’s all about that pizza box,” he said with a chuckle. “And that’s because that’s really how we get started for the next year.”

The Perkins Restaurant – Fantasy of Lights Parade is set for this evening along Main and Market streets and is scheduled to begin at 6:30 p.m. Radio journalist Howard Monroe and long-time dance instructor Toni Zeakes will serve as this year’s grand marshalls. 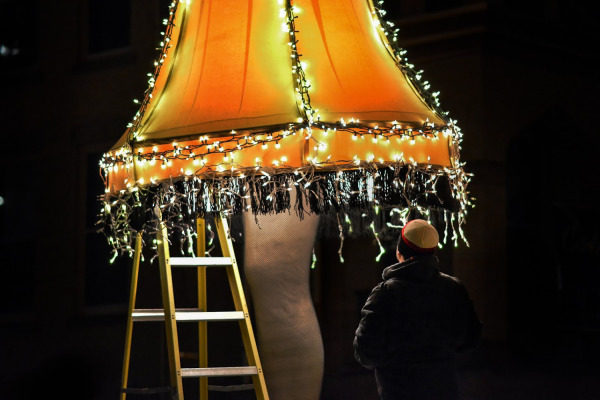 The “Leg Lamp,” made famous by the movie, “A Christmas Story,” made an appearance in last year’s parade.

While the city of Wheeling has staged a Christmas-themed parade for decades, the procession moved to the evening for the first time in 1986. Bill Bryson was the parade chair then, too.

“The short answer as to why I have been involved for so long is that it’s fun,” he admitted. “And over the last five to seven years it’s become even more fun for me and the committee because we sort of changed the way we go about it. Of course, there are 75 units in the parade that would be here even if I and the others were not involved, but now we have between 10 and 15 openings in the order that makes it a blank canvas for us, and working on those slots has really opened up the creativity that goes into it.”

One of those slots will be the first one following the Wheeling Post 1 Color Guard, and it will be the “Pride of West Virginia,” the 420-member marching band from WVU. The unit will stop and performe at three designated areas along the parade route, Bryson reported, and the other openings will be filled by characters from Star Wars and a few other surprises. 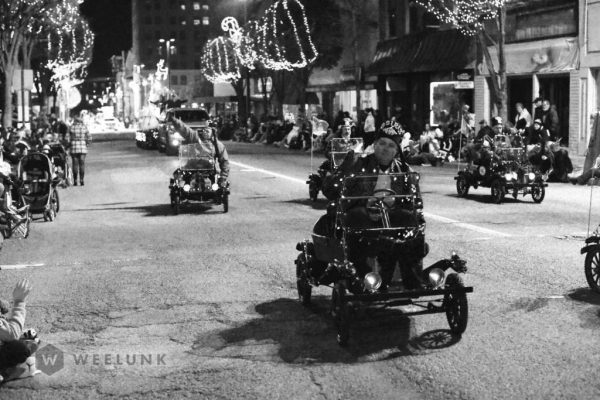 An annual highlight, the mini-cars from the Osiris Shrine.

“We’ve very excited that it worked out for us this year to have the WVU band returning to Wheeling this year because it’s been a few years since we’ve been able to arrange their appearance,” he said. “They are toward the very beginning of the parade because they have to get back to Morgantown to get prepared for the Mountaineers’ game against Oklahoma Saturday night.

“And it really doesn’t matter where they are in the parade order. You will get goose bumps when you hear them play. They are that good, and I can tell you I get goose bumps just watching them on TV,” Bryson said. “And we’re very excited to have the Star Wars company coming this year because that’s going to appeal to everyone along those streets.”

Along with the “Pride of West Virginia,” several other bands from throughout the Upper Ohio Valley also will participate as will a plethora of dance troupes, fire departments, local businesses and organizations, and cartoon characters. The Wheeling Police Department has released information concerning altered traffic patterns within the city’s business district. 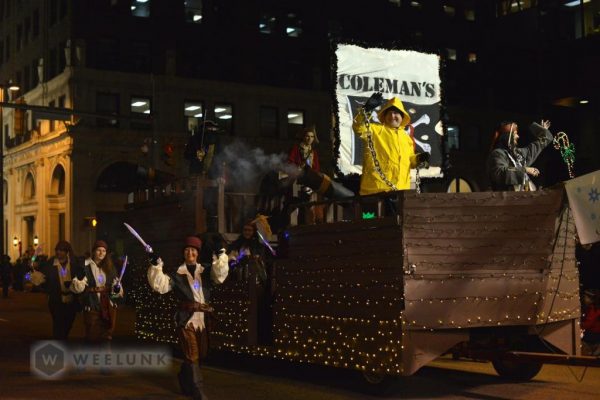 Joe Coleman from Coleman’s Fish Market assisted with the resurrection of the “Talking Christmas Tree,” a well-known tradition in downtown Wheeling.

At 4 p.m., the area near Centre Market, between 20th and 23rd streets, will close to throughway traffic except for a portion of 22nd Street for those wishing to visit the historic market houses or nearby restaurants and shops; Main Street, from 10th to 23rd streets, will closed but 10th Street will be established as a one-way path in order to alleviate traffic congestion in that area.

“And that is very important information for anyone who is planning to attend the parade because of the warm temperatures in the forecast for the evening,” Bryson said. “There are always thousands of people who line the streets no matter what the temperatures are, and we have experienced some very cold parade nights, but with the warmth I expect there will be upwards to 20,000 people who will make their way into town.

“And I remind people every year that there is more than one way into downtown Wheeling other than Interstate 70, and that goes for people coming in from the east of downtown Wheeling, and those traveling in from Ohio,” he said. “Interstate 70 is always backed up in both directions because those people forget about Interstate 470 and the 16th Street exit off of W.Va. Route 2.” 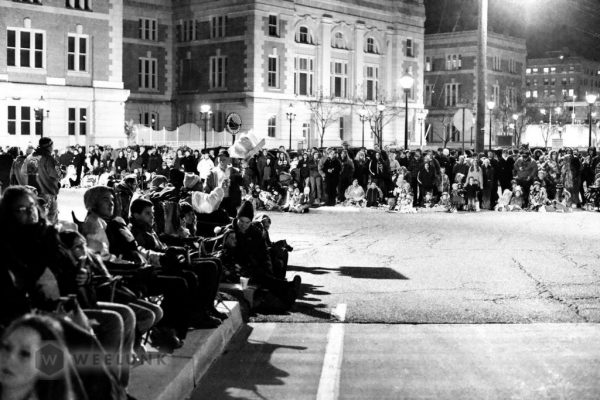 Parade officials are expecting a larger-than-usual crowd this evening because of the warm weather.

This year’s parade is Bryson’s 31st as the parade sub-committee chair, and although he has had thoughts about retirement in the past, that idea now is no longer something he is considering. That news thrilled the president of the Wheeling Chamber of Commerce, Erikka Storch.

“Bill Bryson is a fantastic person to work with, and he really has a hand in everything that goes into our annual parade,” she said. “And yes, we wanted him to be that complete asset to us every year as long as he wants to remain involved because he’s really made it what it’s become today.

“It is an extensive process and there are a lot of details that go into it that the people who attend probably do not realize but it’s the aspects that no one really sees,” Storch continued. “But parade week is always a very hectic week that goes by very quickly for all of us, but it’s a great kind of busy because of what we’re working to provide the people from this region.” 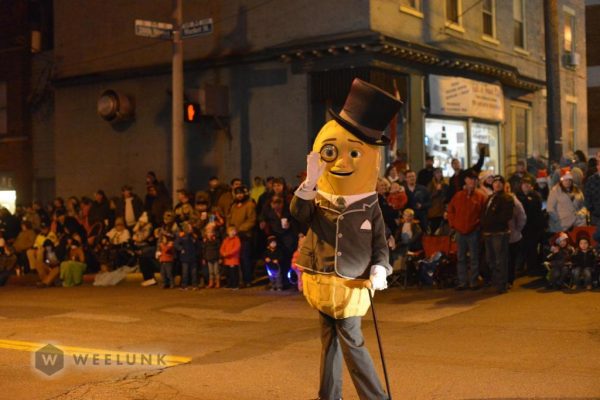 “Mr. Peanut” from Planters waved to all the children and adults one year ago.

“I’m not going to retire from doing this parade because I’ll admit it; I’m really just a kid inside,” Bryson said. “Working with the people at the Chamber is always a very positive experience for me, and to be honest, my mind is already working on next year’s parade. I will tell you that when Macy’s has its Thanksgiving Parade, I’ll be sitting in my house watching with a pen and paper in hand because you just never know where the next great idea is going to come from.

“That’s because if we start planning now there’s nothing that’s left for the last minute,” he added. “And I love hearing the reactions from people who attend or watch it on television because those are items that I write down on that pizza box. The feedback from the community is huge for us and that includes what we hear the evening of the parade or what others offer us throughout the year. That’s where the great ideas come from.”