He bawled like a baby when he returned to Wesbanco Arena yesterday, and that’s not exactly how hockey fans in Wheeling remember Doug Sauter, the head coach that escorted a minor-league hockey franchise from North Carolina to a virgin market where the sport was played, but the importance of blue lines and the crease had to be learned all over again.

Sauter arrived here in 1992 with a Walrus-style mustache, that Canadian accent (‘eh’), a bravado that presented him just as tough as the sport he made his life, and his coaching was aggressive, his teams attacked the opponent’s strengths, and his players especially preyed on vulnerability.

And Sauter was a most popular man in Wheeling during the early 1990s because he seemed steel-mill strong at a time when the industry was declining in the Upper Ohio Valley. The blue-collar folks identified with him; they liked him, and they adopted him. He had a plethora of choice words for the blind mice on the ice, and the Thunderbirds won way more than they lost. 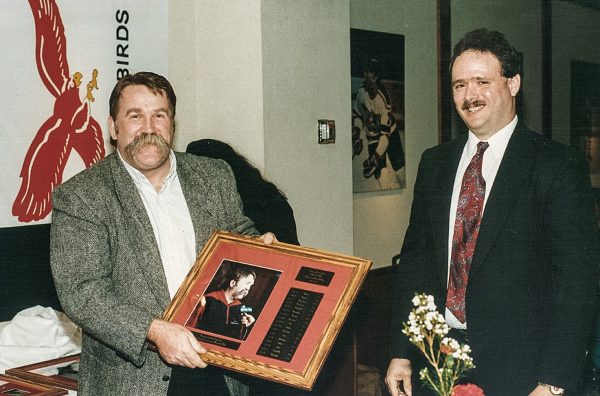 Sauter collected a plethora of accolades during this three seasons in Wheeling.

Sauter is now back in Wheeling and will be honored before the Wheeling Nailers’ home opener this evening against Brampton, a game that will officially launch the 25th year of professional hockey in the Friendly City. He will join a few other former coaches, and numerous former players to celebrate an improbable anniversary for a franchise that has experienced both peaks and deep valleys as far as ticket sales, attendance, and success on the ice.

“As I have gotten older, I’ve grown to be more sentimental. I guess I’m not as tough a guy as I used to be, and you can bet that I’ll be thinking of a lot of different things while I am here this weekend,” Sauter said. “Just being inside the ol’ ‘Thunderdome’ is going to take me back those 20-some years, and it’s something I am really looking forward to.

“I know they are the Nailers now because of the copyright laws, and when the name changed, the Thunderbird tradition went away, but they started a new tradition with a new name, and they have been a very successful franchise ever since,” he continued. “I’ve always kept an eye on the city of Wheeling and on the Nailers because I was there for the very beginning, and it’s really great to see that professional hockey is still going strong in the Ohio Valley.” 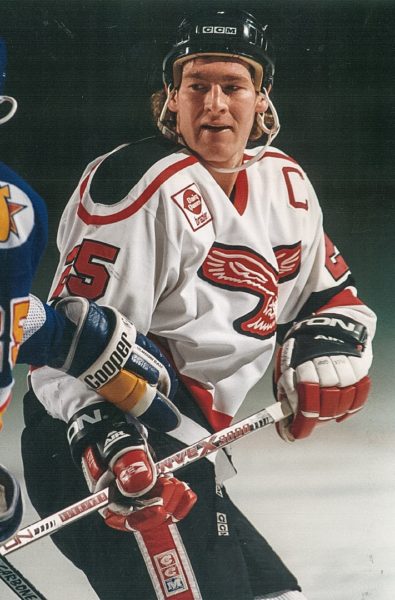 Brock Woods is one Nailer who remained in the Wheeling area.

He will relish the chance to visit with former players like Brock Woods and Darren Schwartz and before his homecoming, he looked forward to giving arena general manager Denny Magruder a big hug, too. Sauter also would like to find the time to return to a few local eateries like Ye Olde Alpha and T.J.’s Sports Garden, but most of all this veteran coach is eager to experience the hockey atmosphere inside a building that recently was renovated for more than $6 million.

“Wheeling was a very special place for me and for the players because the people made it a great place to play the game and to live,” he continued. “There were a lot of people and a lot of different reasons why I really enjoyed those three years. We were the new kid on the block when we first came to Wheeling, and the people in that area adopted us and made everything a great experience for all of us.”

The Thunderbirds departed the Winston-Salem area once attendance and interest waned and the finances tightened for the ownership group. A few local businessmen in the Wheeling area stepped up with the necessary cash flow and worked with Magruder and his staff to create something never seen before in the Upper Ohio Valley. 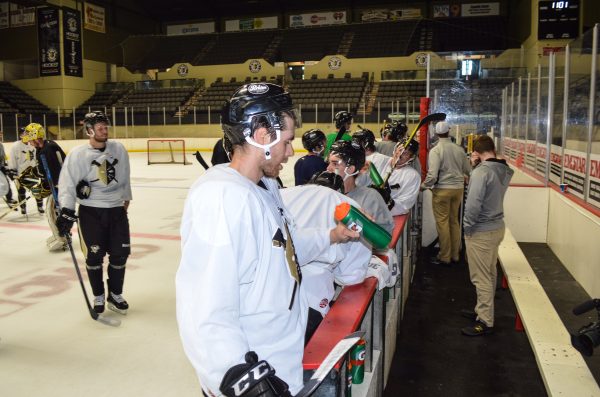 The roster has turned over already during the two weeks of training camp.

The area where Generations Restaurant now serves its vast menu once was tabbed the “Thunder Club,” and local media outlets were providing a shrinking market with daily updates and player profiles in hopes of riding the coattails of the next best thing in this Rust Belt region.

“Back in the 1990s in the Ohio Valley the economy wasn’t great, but I believe hockey gave a lot of people hope and gave a lot of people a new identity,” Sauter said. “When I look back at those kids, they gave me a great amount of pleasure. Those teams were always very competitive, and the people in that area appreciated that fact. Plus, we became very involved in the community, and the residents there appreciated that, too. 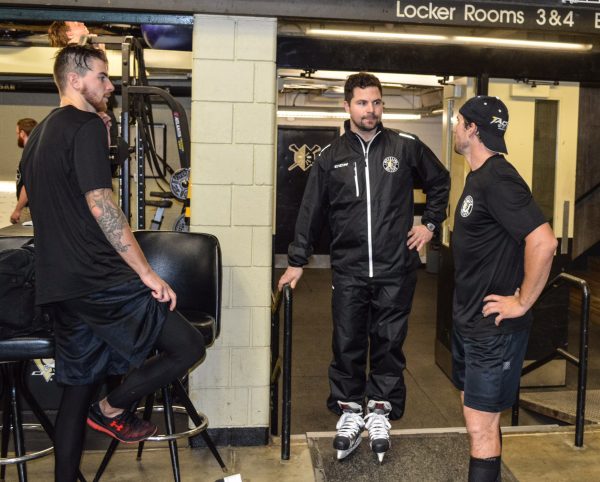 Assistant Coach Riley Armstrong speaks to a couple of players during training camp.

“Our first year really set the table for us because we had a lot of success. We had put together a really good group of athletes and our affiliates at the time, Montreal and Edmonton, added to that roster, and those guys made us even better,” he recalled. “It was an exciting time and unfortunately we lost in the finals to Toledo in double overtime. That was disappointing, of course, but the fans were really into it, and last year’s team brought kind of excitement back to Wheeling hockey. That’s why it’s going to be a very proud night to be here for the kickoff of the 25th season of professional hockey in Wheeling.”

Sauter and the Thunderbirds were welcomed in Wheeling with open arms and celebrated whenever and wherever possible by the fans and by business owners who hoped the team members would stroll into their establishments so their entourages would follow. The team’s instant on-ice success coupled with the newness of the professional franchise provided the players and this coach with “rock star” status throughout the Upper Ohio Valley.

“And that was part of a great experience, and so did the rivalries that we had at that time. I remember one night when we were playing Columbus and we had a fake guy come in for that night for shootout contest between periods,” Sauter recalled. “He was announced as a Columbus fan when he was called out to the ice and, that night, we were giving away a clunker of a car that they actually had to tow onto the ice for the contest. 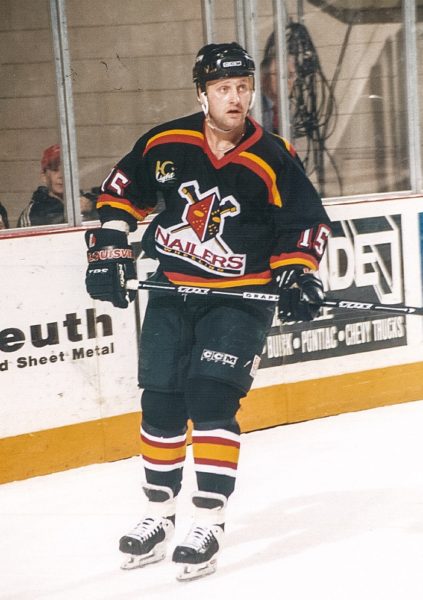 Former Nailer Darren Schwartz was a fan favorite in Wheeling.

“And then the guy made the shot to win the clunker car,” he said with a deep laugh. “So he went over to it and got into the car, and then the tow truck took him and the car off the ice. We had a lot of fun back in those days and did lots of things that were very unique. To be honest, there was nothing but positive things that happened during my years in Wheeling.”

But, while the city of Wheeling is set to celebrate the 25th anniversary of professional hockey in the Friendly City this evening, Sauter’s time in Wheeling expired after just three seasons. The head coach had a contract, and although the Thunderbirds advanced to the Riley Cup finals after the first season and had qualified for the postseason all three years, no one mentioned an extension of his tenure.

“During my third season we had a lot of success and went into the postseason as the No. 1 team in the league, but my contract was up, too,” Sauter reported. “When we went into the playoffs, our roster had been torn up because of call-ups by our affiliates, and we had lost eight of our regular playoffs just before the first game. And then we lost in the first round because we had lost all of that momentum.

“But because my contract was up, there was that question mark in the air, and by that point I had learned that, sometimes, there came that time when I should just know when to leave, so that’s what I did,” he said. “The people in Oklahoma City had contacted me, and they were about to open a new building, so I grasped that opportunity, and I’ve been here ever since.” 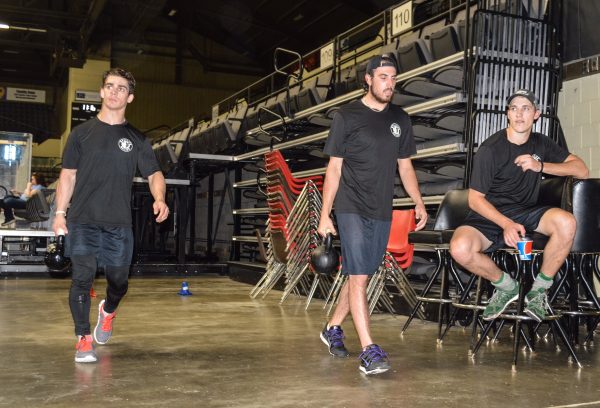 Conditioning has been an important part of the Nailers’ preseason workouts.

Tragedy in Oklahoma City unified that community, too, after Timothy McViegh shocked the world when he orchestrated the bombing on the Alfred P. Murrah Building on April 19, 1995, killing 168 people and injuring more than 600.

One piece of the Oklahoma City community the residents rallied around was their minor-league hockey franchise, and there was the personable Sauter at the helm.

“When that bombing happened, it was on the minds of everyone in the United States and in Canada, and I remember thinking that after such a tragedy the people were going to need something to distract them and to make them feel as if everything was going to be OK,” Sauter said. “Plus, it would be a chance for me to start over. They didn’t know my jokes, ya know? So I took that opportunity in a city that was really, really hurting, and it worked out, and we won the championship that very first year, and in the end I experienced 13 years of great success. 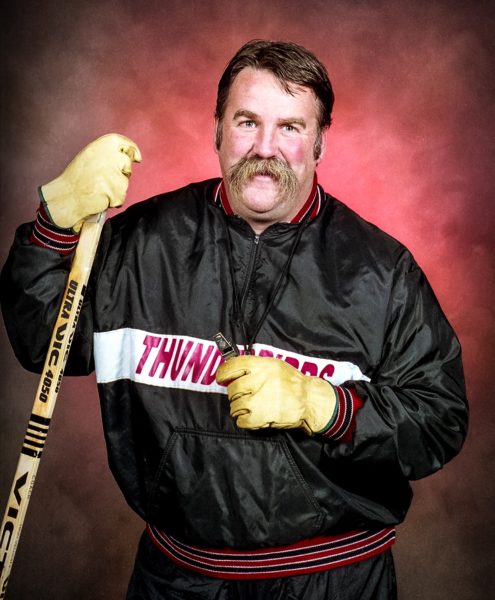 “And this area leans a little more to my lifestyle, to be honest, because now I own a small horse ranch, and I’ve been heavily involved with the agriculture around here,” he said. “For example, I’ll be attending the FFA’s national convention after my trip to Wheeling, and there are also rodeos and events like that. I had a great time in Wheeling, but I’ve been very fortunate since I left there.”

He says during his visit to Wheeling this weekend he plans to sign autographs until there no longer is a line, and Sauter admits he will only remember many people once he sees their faces again. Most of the names have faded in his memory since he retired from hockey in 2010 at the age of 57, and these days he remains active in the Oklahoma City area as a board member for a plethora of organizations involved with agriculture and the region’s history.

“I’ve been a lucky man; I really have, and my short time in Wheeling was a big part of it,” he said. “I learned a lot while I was there about how important a community can be when you do what I did for a living, and I don’t think I realized that before coming to the Ohio Valley.

“That’s why, when the people from the Nailers called me and asked me to come back for the 25th anniversary, I jumped at the chance. I had been back in 2014 for a golf event, but this time it’s all about hockey,” Sauter added. “I had noticed a lot of changes to the area when I was back then, so I am looking forward to seeing as much as I can and reuniting with as many as possible. But I’m warning you now; there’s going to be some tears in my eyes and that’s because of how special Wheeling has always been to me.”

(Photos provided by the Wheeling Nailers)