A free performance of William Shakespeare’s “A Midsummer Night’s Dream” will be presented by the Red Masquers of Duquesne University at Wheeling Jesuit University’s Troy Theater, Saturday, May 21.

The 7 p.m. production is a classic comedy that focuses on the struggle of love, magic, and the relationships between fantasy and reality. The Red Masquers adaptation, set in 1960s San Francisco, will feature extra “diva fairy backup singers” belting out hits from that era.

“A Midsummer Night’s Dream” is Shakespeare’s most popular comedy and was written around 1594. It portrays the adventures of four young lovers and a group of amateur actors and their interactions with woodland fairies and a duke and duchess.

Taking place in a mythical Athens and an enchanted forest, there are a handsome fairy king, a misguided parent, star-crossed lovers, a weaver who’s transformed into a half-donkey, wood sprites, and elves. This work is widely performed around the world, and no wonder; it’s about the world’s most popular pastime, falling in love. But as Puck knows, falling in love can make fools of us all. 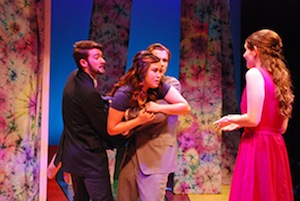 The performance is part of the Oglebay Institute’s First Folio!,  now on display until June 12 at the Oglebay Mansion Museum.

Considered one of the most influential books in the world, the First Folio! includes 36 Shakespearean plays, 18 of which had never been printed before.  The First Folio! national tour is part of the Folger Shakespeare Library’s 2016 Wonder of Will celebration of 400 years of Shakespeare.

The play is two hours in length. No tickets are required, and seating is available on a first come, first served basis. The cast will stay for questions after the play concludes.

Groups of 10 or more interested in attending “A Midsummer Night’s Dream” should contact Mark Phillips at 304-243-2232. Other First Folio! events can be found by visiting oionline.com.