Editor’s Note: Dallas H is the author of “Shaking the Family Tree,” an anonymous personal memoir/poetry offering of a recovering alcoholic. Interlaced with relative poetry, it addresses the ramifications of the disease of alcoholism.

In this memoir, Dallas touches on her battles with weight and co-dependency, in addition to the pre-disposition for alcoholism — the single thread that ties it all together and made her life a living hell. 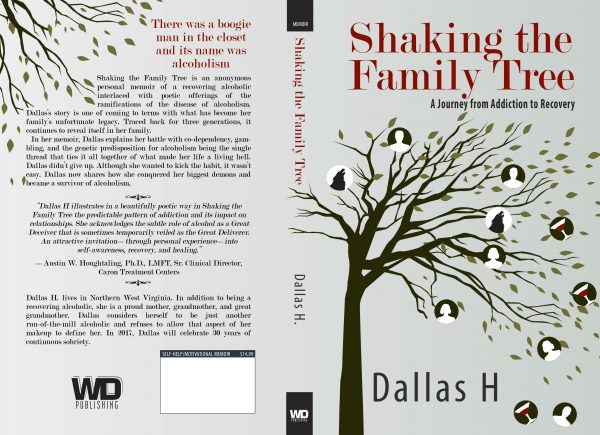 In addition to being a recovering alcoholic, West Virginia resident Dallas H, is a proud mother, grandmother and great-grandmother. She considers herself to be just another run of the mill alcoholic and refuses to allow that aspect of her life to define her.

Here, she shares her interview with Eric Bergstrom of Bay Cities Radio in Marinette/Menominee, Wisconsin.

Eric: Your new book, “Shaking the Family Tree,” is about your life. How does it feel to lay your life out on paper for all to see?

Dallas H: Because it is written anonymously, it was not a big concern. Even though the intent was to protect the anonymity of those who are part of my story, I’ve come to understand through recovery, that my story is not so different from that of many other alcoholics. The element of shame and guilt that I experienced early on has dissipated over the years, thanks to the fellowship and support of a couple of 12-step programs.

Eric: What does writing mean, and do for you? Is it a therapeutic exercise?

Dallas H: Writing, putting it out there in black and white where it can’t be denied, or you can’t take it back, can be both painful and therapeutic at the same time. It filters and helps put in some kind of order, a lot of the confusion about events, and the feelings that accompanied those events. 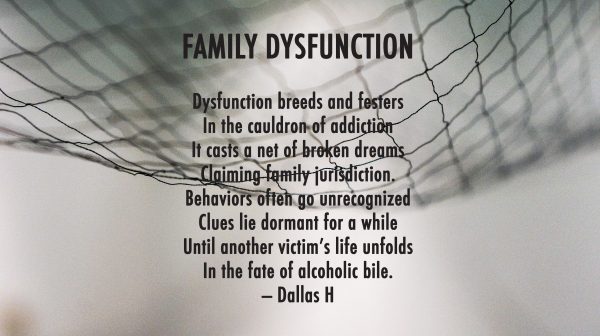 Eric: What led you to the writing of this book?

Dallas H: In the beginning, I was simply going to write a chapbook of poetry that focused on alcoholism because I felt I knew a little bit about it. When I approached my author, Brittiany Koren, she posed a simple question. She said, “Why don’t you give us some examples from your own life that will help us understand?” And it ballooned from there. The memoir was not the original intent.

Eric: What were you hoping to accomplish with the book?

Dallas H: There are two very specific things: First of all, I wanted to be able to leave my children and grandchildren something useful. Something tangible and from my heart. Once I was in touch with the direction that this endeavor was headed, I wanted to impress upon them the knowledge that this predisposition for alcoholism is part of their legacy, and just where it could take them, once unleashed. And I wanted to do it in a way that wouldn’t come across as preachy or threatening. I guess you might say I had a hidden agenda. Secondly, and equally important. my hope is that by sharing my story, which really isn’t so unique, that those afflicted, their families and loved ones, will come to understand that no one has to go through this alone; that there help out there, in a variety of forms. And above all, that there is hope.

Eric: Explain the meaning behind the title, “Shaking the Family Tree.”

Dallas H: First of all, alcoholism is a family disease. And here I am referring to the genetic predisposition. It has already claimed members in four generations of my family, and, there are indications that it is threatening the next. When my son told his story for the first time, he said, and I quote. “If you shake our family tree, every kind of alcoholic you can think of will come tumbling out.”

Eric: What was the road that led you to become an alcoholic, and do you think it was predetermined?

Dallas H: I believe in the genetic predisposition, but the bottom line is I drank my way into alcoholism. I can come up with all kinds of excuses: I was raised in a home and neighborhood where a few drinks took the edge off, and the corner bar was a respite for all of your ills; my marital life was the pits, and alcohol was my escape; I needed to relax, I deserved a little fun. The list goes on and on. Perhaps if I had been raised in a different environment, or had been exposed to the educational material available today, it would have been different. Who knows? It’s probably a coin toss, but in the end, it doesn’t matter. It is what it is.

Eric: Do you remember when you first became aware of alcohol and when it started making a presence in your life?

Dallas H: I remember it was the root cause of my mom and dad’s arguments. But at the time, I didn’t quite understand why. I saw no harm in Dad stopping at the corner bar to unwind after a hard day’s work. Yes, maybe on occasion he stayed too long, or on the holidays he started celebrating a few days too early, but so what? I used to think that Mom nagged him so much no wonder he drank. But that is another story. I didn’t understand anything about the family dynamics and co-dependency until I got into recovery. Reflecting on my own consumption, one of the things that stands out, was my level of tolerance. Even early on it was extremely high. I mistakenly took that to mean that I didn’t have a problem. I could out-drink most of my friends without appearing drunk. That ability happens to be a warning sign that means the exact opposite.

Eric: How hard was it reliving certain moments while writing this book?

Dallas H: It was quite difficult. I was revisiting a lot of pain. Pain that is especially raw when faced sober. Most of the time I keep all of that in the rear-view mirror; not to be forgotten but at a safe distance. 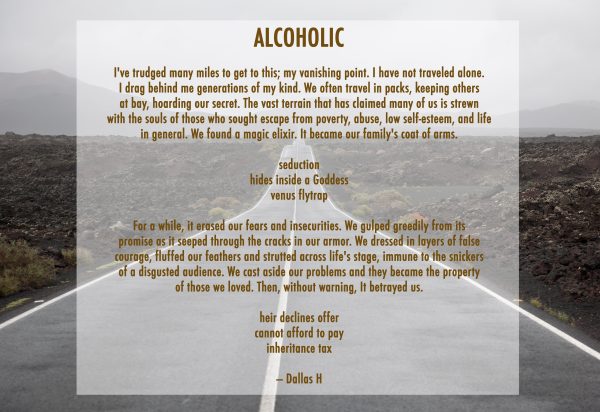 Eric: One of my favorite parts of the book is the part where you talk about the collage. What does the collage mean to you?

Dallas H: Working on that collage was definitely a pivotal point in my recovery. I had only been sober a few months and was enrolled in group therapy sessions for Adult Children of Alcoholics. One of the assigned tasks was to create a collage of photos that expressed how we felt about ourselves and our lives. Since I had been a flat-liner most of my life and had chosen to drown all of those scary, unwanted feelings with alcohol, I had a hard time wrapping my head around that assignment. I gathered up all kinds of periodicals: National Geographic, Psychology Today and my art magazines, and began cutting and pasting. The process was transformational. I would work on it at intervals, and when it became too painful, and I could no longer see through the river of tears, I would set it aside for a few days, but never out of sight, and return to it when I felt strong enough to deal with what it revealed. I discovered that I did have feelings after all. And I began to understand why I stuffed them. They were all negative. The finished product was a huge poster-board full of fear, anger, and sadness. The only sliver of hope was my grandchildren. I still have it. Faded and tattered as it is I use it once in a while when telling my story. And when I look at it today, I am overwhelmed with gratitude that it is a relic that belongs to yesterday. 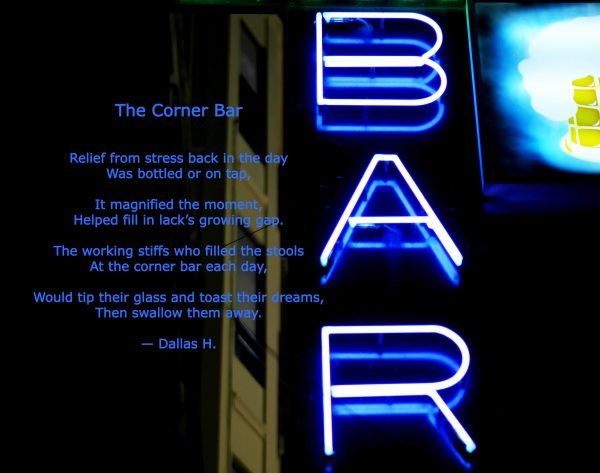 Eric: What can non-addicts take away from this book?

Dallas H: Hopefully a little better understanding of the disease. The knowledge that no one is immune. That it can strike anyone, at any time regardless of social status, gender or age. And that not everyone has to ride the elevator of addiction, which only goes down, to the bottom. That some are lucky enough to get off on another floor.

Eric: What can addicts take away from the book?

Dallas H: In addition to the aforementioned, perhaps a better understanding that escape isn’t the answer. That recovery requires courage, a desire to rejoin the human race, and the willingness to make the effort. And, that the rewards of sobriety far outweigh those temporary highs that eventually turn on you and rob you of your family, your friends and any values you may have had before entering the bleak world of addiction.

Eric: Do you remember when you finally started to get in control of the alcoholism and how did that differ from the other times you tried?

Dallas H: With the exception of one instance about three years prior to my putting it down for good, I wasn’t convinced I had a real problem, so I guess that struggle, that tug of war, didn’t apply to me. That instance was just a little test I gave myself. I decided to quit for a week, and it lasted all of three days. When I quit for good, it was a combination of the educational aspect of the disease and the lifting of the denial that I experienced in my short, but intense rehab stint. I guess I was finally willing to commit. I think my Higher Power was doing for me, what I could not do for myself. 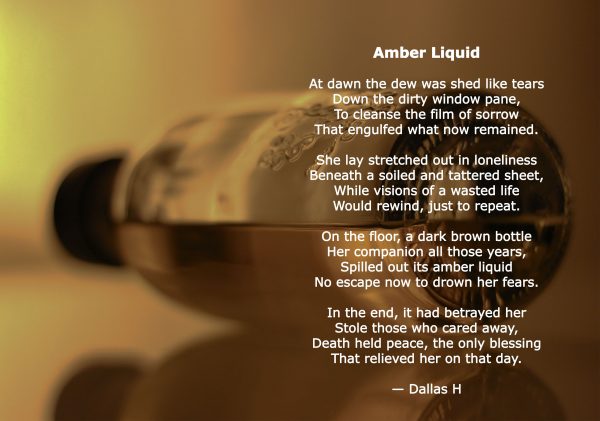 Eric: In your opinion, what makes AA work to help people?

Dallas H: It is definitely the fellowship. The support of those who not only understand but who are truly rooting for you to succeed. For me personally; meetings, sponsorship, working the 12 steps on a daily basis, and reading my meditation books are the bricks and mortar that got me sober and continue to keep me sober today.

Eric: Looking back at your past in your book, what do you think is the most important
thing alcohol took from you?

Dallas H: The gift of choice, which in my case was tied to my inability to face life on life’s terms. Every time that I was presented with an unpleasant situation that required making a decision, I took a drink, hoping and even expecting, that tomorrow everything would be different, no action required. And of course, it wasn’t any different, nothing ever changed. Alcohol was the loophole I used to escape taking responsibility for everything. I drank to escape all of life’s uncertainties and remained in a cell of my own inertia.

Eric: What’s the biggest difference between life with alcohol and life without it?

Dallas H: I can sum that up in two examples: When I was still drinking, I had this big black coffee mug that had my attitude about life inscribed in bold gold letters: It said, “Life’s a bitch and then you die.” I coupled that with the philosophy that this is the hand you were dealt, now deal with it. Today, if you would happen to be tailgating me, take a look at the bumper sticker that reflects my life today. Happy, Joyous and Free.

Eric: What is your advice for someone who is struggling with addiction?

Dallas H: I would tell them to reach out. We only get to go through this thing called life once. Don’t short-change yourself. There are people you don’t even know yet waiting for you with open arms. 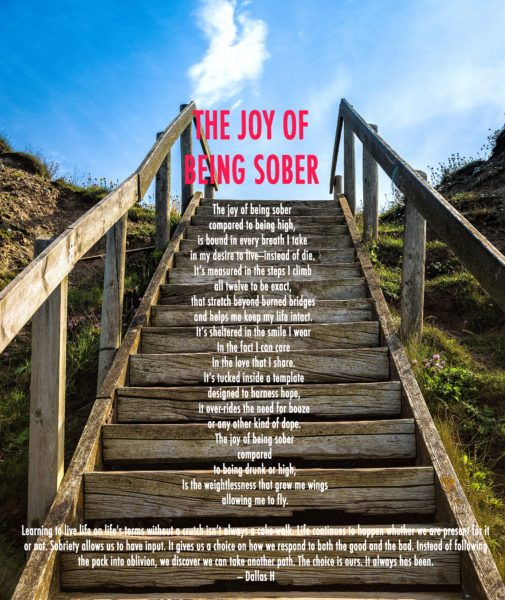